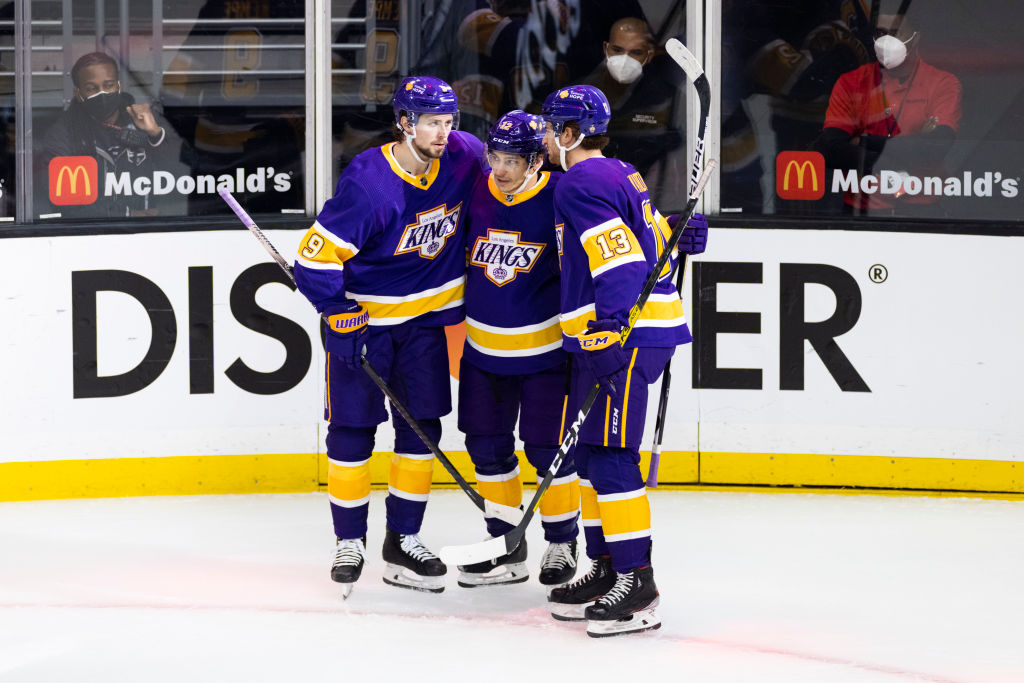 While these are not official exit interviews, we’ll consider them to be de-facto exit interviews, with Mikey Anderson, Trevor Moore and Gabriel Vilardi each touching on bigger picture topics surrounding their season. Anderson exceeded perhaps even his own expectations, as he was productive alongside Drew Doughty on the team’s top pairing. Moore was another to exceed the role he started the season with, as he talked about his place. Vilardi entered with sky-high expectations, and he discussed his process in becoming a well-rounded player throughout his rookie campaign.

– Most players carry expectations for themselves coming into the season and Mikey Anderson was no exception. What his expectations were, however, and what the reality was were likely two different things.

Anderson said that goal number one entering camp was just to make the team. It’s hard to fathom that he had just six games of NHL experience entering the season, isn’t it? From there, Anderson was bumped up to the top pair in game number four this season, ten for his career, and things moved from there. It was surprising even to himself, the progress he made.

“Coming into the year, first goal was to be here out of camp, and make the opening night roster, which I did. I was thankful for that and happy with what happened, but if you had ever told me, going back 3, 4 years ago that from getting drafted to my first year, getting able to play with Drew for the majority of the year, being able to play the way and the minutes that I was, I would have probably laughed at you. I’m pretty thankful to be given the opportunity and just happy that I was able to be here and experience it.”

The Kings were certainly thankful that things did work out for Anderson, and as Drew Doughty pointed to in his own exit interview on Friday, there’s no one else he would rather play with. Happy Drew, Happy Crew.

– Heading into next season, Anderson has already identified the two areas of his game he’s most focused on developing – strength and offense.

Anderson was a consistent, solid, defensive player as a rookie, as he logged more minutes both at even strength and while shorthanded than any other rookie in the NHL. While he was steady, strength and adding muscle would certainly go a long way with matching up against the league’s bigger and stronger forwards.

“For starters, I’m still a young guy and I need to continue to develop physically, put on some more muscle, have a good summer in the weight room. Coming back, I’d like to stick with the defending I had all year, but as time goes on, I’d like to contribute more offensively, be able to make a couple of more plays, try to pitch in a little bit more on that front. I still think the big one is continue to develop and get a good summer in the weight room.”

– Anderson was one of the rare players on the Kings, or at least it feels like, to not represent his country at the upcoming World Championships.

From his comments, it sounds like an offer was made, but was declined for a collection of reasons. Players this season have played a ton of hockey and it would be hard to fault anyone for not wanting to add another few weeks onto an already taxing season.

“Yeah, obviously it was an option, but with the season playing the amount of minutes the way that I did this year, the first, full season if you will, as last year got cut short, with some family stuff going on back home, I made the choice to stay out for this year. Stay home, rest, be with my family and just get ready to start training again, put on some muscle and continue the work from last summer.”

Anderson has represented Team USA before at the U-20 level, and smart money would say that he will have additional opportunities to do so at the senior level, should he choose to do so.

– Trevor Moore wants to be here.

The Thousand Oaks, CA native was acquired from Toronto in February of last season, joining the organization he grew up following and supporting. Moore has played his way firmly into the long-term plans here, and on his end, he’d love to be here in the longer term.

“A little bit. From my end, I want to be here. Big Kings fan, I love this organization, I think that everything is trending in the right direction and I would love to be a part of it.”

Moore is a restricted free agent at the end of this season, and as he noted, there have been “a little bit” of talks going on about his future. With the restricted status, the clock isn’t ticking quite as quickly as it would be for an unrestricted free agent, and there’s plenty of time to get a deal done that would likely benefit both sides.

– You’re nothing without confidence, right?

Externally, Trevor Moore exceeded all outside expectations. He started the season on the fourth line, no higher than seventh on the depth chart amongst wingers, and finished it much higher. Moore played everywhere from the fourth line to the first line, finishing the year as a player moved between units as a sparkplug, who can perhaps get lines going.

While he admitted he was confident in his own abilities coming in, he did note that how things played out were perhaps better than he thought they might have.

“I don’t know if I exceeded my own expectations, I think that you have to have confidence, otherwise you’re never going to push forward. I believed that I was able to do it, I just wanted to try to earn that opportunity. I think this season has gone better than maybe I had hoped, or that I thought it could have, I’m just so grateful for all of the opportunities the organization gave me and the roles they put me in.”

A good attitude to have, for a player who was lauded for his play by his coaches and teammates alike.

– Count Moore among those that feel the Kings have found a way to have success.

“I think that you can see, some nights when we’re on our game, that we’re a hard team to play against and teams don’t like playing against us. I think that, as time goes on and those younger guys come in and they get involved, and we gain more consistency throughout the lineup, I think that we can be that team that’s really hard to play against and make life hard, be a threat in this league, for sure.”

The Kings did not have much consistency, though, and it’s something that the team struggled to find all season long. It’s easy to say it, it’s harder to execute it. Consider Moore though among those who played within themselves and played the right way this season. An example for others to follow.

– After coming back into the lineup, after being made a healthy scratch, the coaching staff gave Gabriel Vilardi a clear message.

“I think just shooting it, less thinking. I felt like, before I was trying to make the perfect play, or set someone up and have them have an empty net, whereas I have to trust my linemates, trust the other guys and shoot. You watch the top players, they shoot, and when you shoot, it creates more opportunities. It creates the defense scrambling a little bit more, that’s when you get guys out of position and that’s when things open up. Stuff opens up off the shots and I’m starting to learn that and realize it, I’ve got to keep shooting, because it creates more, rather than not shooting and trying to make the perfect play.”

The numbers don’t lie down the stretch that Vilardi shot more pucks in the final stretch of the season than he did earlier on, and the numbers support that Vilardi was more dangerous offensively when he shot the the puck more, and his linemates were more dangerous as well. He was able to create and produce with a shooting mentality and learning that lesson as a rookie will certainly pay dividends for him moving forward.

– Vilardi recognized that he’s needed to continue to work on his defensive game as he’s gone through his first full season in the league. It’s not unique to him, it’s a theme for many younger players entering the league.

When you look at a player who was offensively gifted in junior hockey, sometimes the defensive end was less of a focus, because of how impactful that player was in the offensive zone. Playing defense was secondary. In the NHL, defense is allowed to be secondary for very, very few players, and Vilardi has taken some huge strides at that end of the rink.

He also noted the benefit to having one of the NHL’s best two-way centers as a teammate, in Anze Kopitar. Vilardi noted that not only does he watch his own video to improve, but also that of Kopitar, who has much to teach defensively.

“It’s good that I have a guy like Kopi, I can watch him, because he always does the right things, it’s good to just get his video and watch that.”

The 22-year-old center has reverted course, and indicated it’s something that he has been working diligently on to improve, noting that he spent some time with faceoff specialist Jarret Stoll on the team’s roadtrip to Arizona at the end of the season.

“Faceoffs are better, I’ve got to keep working on that, they’re still not great, I’m very inconsistent with faceoffs. One night I’m very good and the next night I can be very bad, so I’ve got to get more consistent on them.”

Consistency is the name of the game, in the smaller scope of faceoffs for Vilardi, and the larger scope for the Kings as a whole.

Next up in the exit interviews cycle will be Head Coach Todd McLellan and General Manager Rob Blake. Both are expected to speak with the media on Tuesday morning, with coverage to follow here on LAKI.