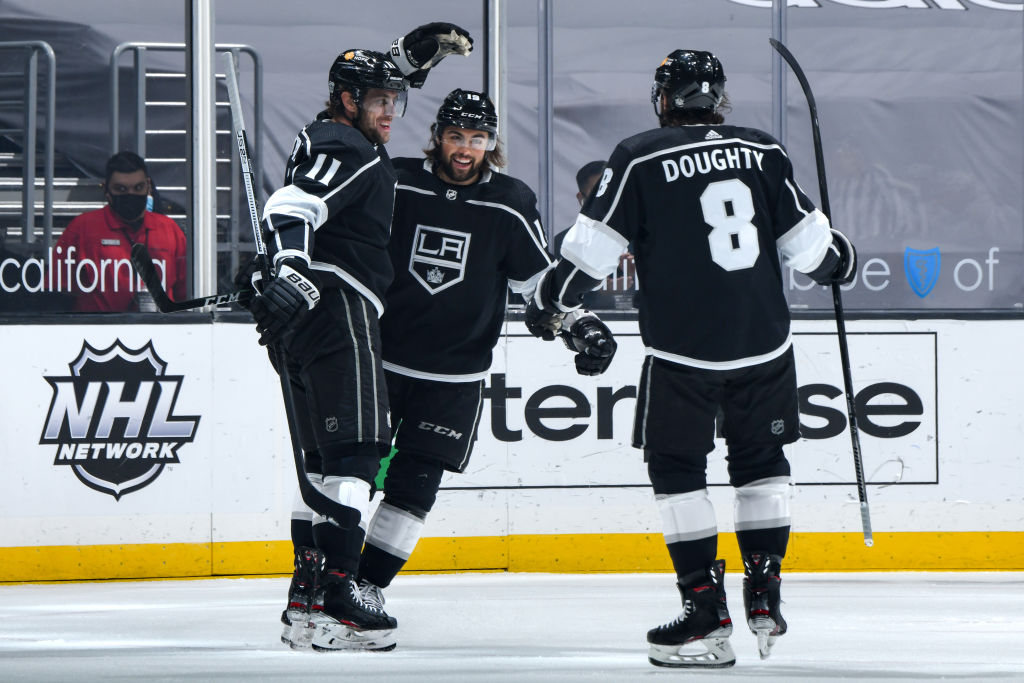 Insiders, we’ve reached that time of the year.

This morning, Kings veterans conducted their year-end exit interviews, adding onto a few younger players who conducted them earlier in the week. Todd McLellan and Rob Blake are expected to hold their season-ending interviews early next week.

We’ll break down the interviews here by player, starting this morning with Anze Kopitar, Drew Doughty and Alex Iafallo, with others to follow. Kopitar was reserved, but still acknowledged the changes that need to be made. Doughty was much more direct in indicating the direction he’d like to see this summer, while advocating for some additions to be made to supplement the current roster. Iafallo’s interview focused on what went wrong for the team down the stretch, but also the strides he took personally as a leader and as a player.

– Kopitar believes that the team took some steps in the right direction this season, but knows that there is still much to be done to return to the postseason.

“As a team, I think we took steps in the right direction, obviously there’s still work left to be done. We’re going to look ahead to that, we’re going to take the positives, look at the negative, see what we need to correct and go from there.”

He didn’t necessarily give a specific thing that the team needs to do to change that, but said that there’s an overall need and desire within the locker room to take things to the next level. While being in the hunt was encouraging, it’s not enough, and there are improvements that need to be made to get to that point.

“We’ve got to come out and perform to our potential. I think everybody in our locker room can and will probably say that we can be better, but you’ve got to raise the level. Being in the mix for as long as we were was refreshing, but it’s still disappointing not making the playoffs. We’ve got to look forward to correcting that and be in a position to make the playoffs.”

– Last night, Todd McLellan talked about the belief system of the team fading down the stretch. Kopitar agreed with the sentiment to an extent, with that point in the year coinciding with the team’s win-loss record fading out of playoff contention.

Confidence is a fickle thing, that tends to ride the waves of how a team is performing. High confidence usually rolls with the victories and the latter can be said as well.

“It’s fair to say that we had an up and down season. When it was up, obviously the confidence was good, when you’re down, it’s not good. In the last little while, we didn’t win too many games so you can’t expect us to be a confident bunch. We have to take this year and learn from it. There were some bright spots and there were some not so bright spots that we have to improve on and get better at and make sure it doesn’t happen again.”

The end of the year was on the low end of the scale, both in terms of output and confidence, a theme throughout the exit interviews from today.

– As you’ll see below, the most pointed comments regarding the offseason came from Drew Doughty, but Kopitar realized the importance and the significance of the offseason ahead as well.

“I think there’s no secret that this summer is going to be very important for us from all points of view, really. Whether that’s developing younger guys, maybe bringing some guys in, so it should be very exciting for everybody and we’ll see what happens at the end of the day.”

The captain took certainly a less direct approach in his answer to the question. He acknowledged that there are two sides of improvement, both internal and external, while shying away from more direct thoughts on the situation. The Kings will likely need to see additions made in both departments, adding talent from outside the organization, as well as seeing certain players from within take the next steps in their development process and cement their roles in the lineup moving forward.

– If Kopitar was general in his comments about the offseason to come, consider Doughty to be the foil character. He was direct with his words regarding how he’d like the team to approach the offseason. When asked if he would be satisfied with the team entering next season without adding to the roster, he paused, reflected and answered simply with “no”.

It was more than that, though.

Doughty elaborated on the “core four” of himself, Anze Kopitar, Dustin Brown and Jonathan Quick getting older in their careers and feels that the Kings have two players at the tops of their positions in himself and Kopitar, and need to capitalize on that.

The main takeaway from Doughty’s interview today was a desire to get better. He didn’t claim to have all the answers, but consistently expressed a desire to see the team improve. Through individual players improving, additions to the roster, whatever it may be, he knows the Kings need to be better next season and it’s not just going to come from one area.

“We’ve got to get better, that’s the bottom line, that’s what we need. Yeah, all the individual players need to get better over the summer, stuff like that. But, as a team, we just need to be better and get better. That’s not just on the players.”

– When asked if he’d like someone brought in as a partner, Doughty quickly rejected that idea. He noted that he has loved playing with Mikey Anderson this season and feels that he and Anderson have made a great pairing. He went on to add that he doesn’t even feel that the defense necessarily needs any additions, stating that he likes the makeup of that unit when everyone was together and healthy.

“I don’t want someone, I like playing with Mikey Anderson, I love playing with Mikey Anderson. We’ve developed quite the partnership. I don’t think you need to bring anyone in to play with me, I don’t think you necessarily need to bring anyone in on defense, I think our defense is solid. I like our young guys, I like our middle of the pack, veteran guys. Obviously, we have to bring guys in, that’s not my job to make that decision, you guys can ask Blakey that.”

Doughty went on to complement Anderson both as a player and a partner, but also as a younger guy who was confident enough to speak his mind in the locker room. On a team where Anderson is amongst the youngest players, Doughty called him one of the most vocal individuals on the team already, and that says volumes about Anderson’s character at a young age.

“The one thing with Mikey is this guy is already talking in our dressing room, at intermissions and stuff like that. He’s already one of the more vocal, probably one of the top three most vocal guys on our team already. To say that about a guy like that, it’s basically unheard of. Mikey is a great pro already, he’s many years above what his age actually is.”

Doughty believes that he and Anderson clicked as a pairing, almost right away, and made it clear who his preferred partner is moving forward.

– From an individual standpoint, Doughty was happy with his own season, while also quite disappointed with how things went south down the stretch. Doughty put to bed the narrative of his game going downhill, and from his personal evaluation, this season was among the best of his professional career.

Over the majority of the season, call it whatever fraction of the full campaign you’d like to, Doughty’s play was elite, and coincided with how the team was playing. He felt that his own game, and the team’s, faded in the latter stages of the season, but looking at the larger picture, he was happy with how his game rounded out.

“It just kind of sucks how the season ended, I went on a cold streak personally and as a team, wish we could have done better there. Overall, was very happy with my season……personally, I want to be up for that Norris every year. I know it’s not easy, but that’s where I want to be.”

– Before the start of the season, a point of discussion was the secondary core, the creation of that group and the need for evolution from that group. At the time, the players of focus were Iafallo, Adrian Kempe, Matt Roy and Sean Walker. All four players made strides individually, and the play of others such as Mikey Anderson and Cal Petersen should hopefully continue to see that group grow not just in size, but in standards and ability as well.

This morning, Iafallo pointed to communication within that group specifically as playing a big role in assuming some of the leadership burden this season.

– Speaking more about himself, Iafallo wore an “A” for the first time as a professional, joining Kopitar and Doughty with letters after Dustin Brown’s season ended early due to injury. While progression on the ice was important, Iafallo looked at his progression in the locker room, and as a leader, as well as a point of emphasis for himself this season.

“I’ve had a lot of good captains and assistant captains, so I learned a lot from them. As you grow, year-by-year, obviously you want to get better and improve every year. I feel like this was the time for me to grow leadership wise. Looking at all the veterans and leaders, I just wanted to take a chapter from them, help the younger guys and help the team grow. That’s just the step I wanted to take this year.”

– Iafallo also reflected on what changed for the Kings down the stretch and what eventually took the team out of the playoff picture.

He felt that as the team lost a couple of games in a row, they didn’t do enough to get back on track, to generate positive momentum that would help to get back to winning ways. Echoing what Kopitar said, Iafallo talked about learning from it moving forward, and trying to take those lessons into next season.

“There were a lot of ups and downs this year, for sure. I feel like we’ve got to stick together in those times, especially near the end there with the playoff race. If you lose a couple in a row, I feel like we didn’t really get enough momentum back to start winning games. We’ve got to learn from that and take it as it is. We have to make sure we’re not doing that next year, stay positive and learn from everything.”

Coming up next will be end-of-season quotes from Adrian Kempe, Cal Petersen and Matt Roy, followed by Mikey Anderson, Trevor Moore and Gabriel Vilardi. As noted above, McLellan and Blake are not scheduled to hold their season-ending press conferences until early next week, with their availabilities to be covered in full at that time.