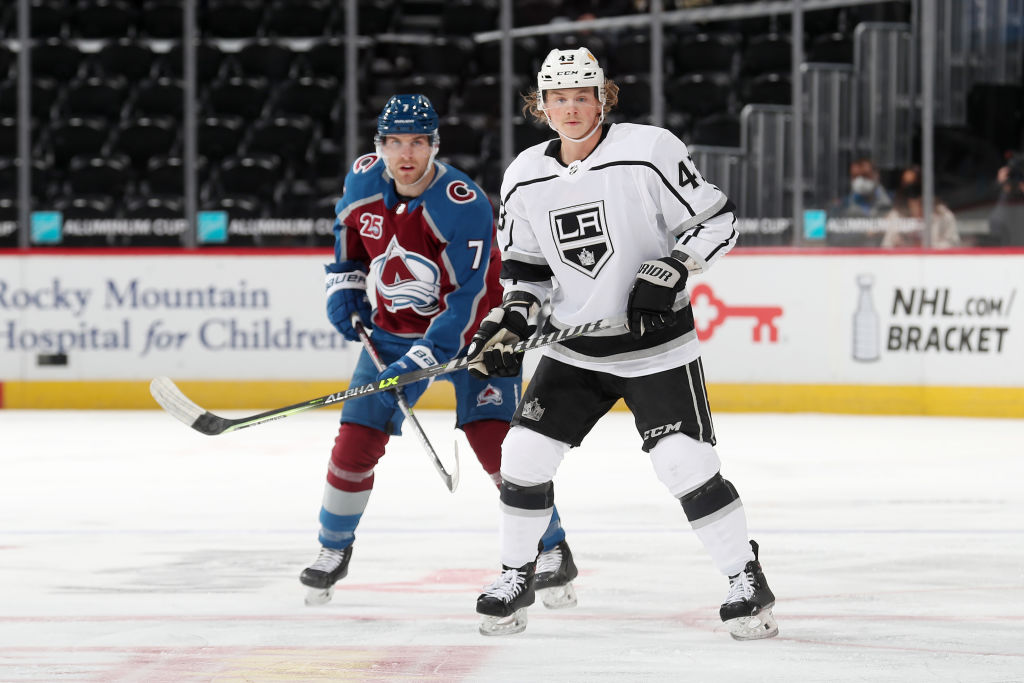 The LA Kings completed their regular season with a 5-1 defeat against the Colorado Avalanche on Thursday evening in Denver. With the victory, Colorado clinched the NHL’s Presidents Trophy for most points in the regular season.

Although it was Colorado that controlled most of the puck in the opening period, it was the Kings that found the lone goal, through an individual effort from Sean Walker. Walker stripped forward Andre Burakovsky at the defensive blueline, took the puck the length of the ice and snapped a shot past Jonas Johansson to open the scoring with his fifth goal of the season, unassisted.

The Avalanche broke through, however, with five goals in the second period, to take a 5-1 lead through 40 minutes of play, the most goals the Kings have allowed in a period this season.

Forward Tyson Jost scored the first two, off of a shot through a screen from the slot, followed by a redirect driving the net, to put the hosts ahead 2-1. Forward Pierre-Edouard Bellemare made it a 3-1 game later in the period, as he buried the second rebound opportunity off a scramble in front, following a pair of stops from Kings netminder Troy Grosenick. Joonas Donskoi made it 4-1, with a baseball swing at a shot out of midair at the back post, before Burakovsky scored on a clean wrist shot, inside the post, for the fifth of the frame.

Hear from forward Drake Rymsha, who made his NHL debut tonight, and Head Coach Todd McLellan from after tonight’s game.

On the things that Drake Rymsha brought to the group this season, and seeing him play his first NHL game tonight
Well, he’s kind of been an unsung hero around our group, he’s been with us all year on the taxi squad. He’s worked as hard as anyone that dresses every night, he just sat back quietly and did his thing. Everything we asked of him he did, and we got banged up here at the end, a couple of players, and he got his opportunity. The group was so excited for him, I think he motivated us a little bit tonight to pick our socks up and I couldn’t be happier for him, he’s so deserving of it.

On how much the final six weeks impacted the strides made in the first three months
We didn’t play as well as we did earlier in the season, I think that’s evident. We lost some players to injury, we made a move, a player left, the quality of opponent I do believe we went up. We had the streak of games there against Vegas, and then obviously the number of games we just played here against Colorado also presented a big challenge for us. There’s clearly a difference, a separation, between these two teams, three teams in our division and the rest. That’s just the way it is, we have that far to go. I didn’t think we played as well down the stretch as we did earlier in the year, there was a point where we did believe that we could be a team that was going to push for it and then it slipped away on us.

On the condensed schedule and how it impacted the Kings
There were pros and cons to it. I thought, earlier in the year, it helped, the older players had outstanding starts, maybe didn’t finish quite the way they wanted to, but it helped them, with less practice time, but I think it hurt a lot of young players. In our situation I think a lot of the teaching, a lot of the learning, had to be done through video throughout the season. Sometimes you take a negative event and it affects them mentally, so we tried to find positive stuff, but some of the best teaching moments are from mistakes. A lack of practice time certainly [didn’t help], but 31 teams, some got through it better than we did.

On some of the team’s strides he is most proud of from this season
Well, we have to sit back and review everything. I think there are areas that we improved in. Our special teams numbers went up, but then they started to come down, in particular the power play, it was two different seasons in my belief. The power play carried us a lot, but then it went dry, it caused problems for us, we had trouble scoring 5-on-5. A lot of younger players took on more meaningful, important roles. Were they or are they ready for them? Sometimes, that’s a real good thing and sometimes that’s not a good thing. I know the rhetoric out there is play the kids, play the kids, but we can do as much harm playing the kids as help if we put them in situations that they aren’t prepared for.

Notes –
– Forward Anze Kopitar finishes the season as the team’s scoring leader for the fourth consecutive season and 13th season in total, more than any other player in franchise history.
– Defenseman Sean Walker scored the game’s first goal tonight, and finished with eight points (3-5-8) during the month of May, the most amongst NHL defensemen throughout the month.
– Forward Drake Rymsha made his NHL debut tonight and logged 13:16 in his first game, recording a +1 rating.

The Kings are scheduled to hold player exit interviews tomorrow morning, with coverage to follow throughout the weekend here on LAKI.