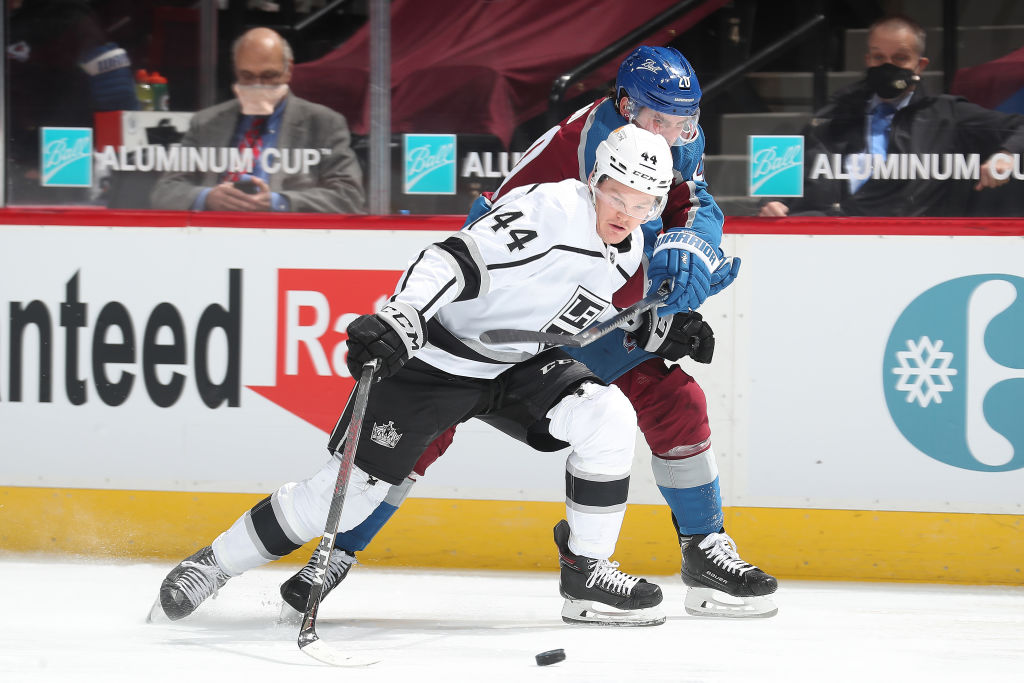 TONIGHT’S MATCHUP: The Kings will conclude the 2020-21 regular season this evening in Colorado, with the backend of a back-to-back set versus the Avalanche.

HEAD-TO-HEAD: The Avalanche have won all three games played so far this season at Ball Arena, and enter tonight’s action at 6-1-0 against the Kings this season. Following yesterday’s shutout, forward Anze Kopitar still leads the Kings with five points (0-5-5) from now seven games played this season against Colorado. For the Avalanche, forward Mikko Rantanen collected three points last night, and now has 11 on the season (4-7-11), more than any player in the league this season versus the Kings. Rantanen has collected a point in 11 straight games against LA over the last three seasons.

KINGS VITALS: The Kings did not hold a morning skate today, in advance of tonight’s game against Colorado.

Grosenick made 33 saves on 34 shots in his only appearance with the Kings to date, a 5-1 win over Anaheim on March 10. Grosenick previously appeared in two NHL games with the San Jose Sharks in November 2014, amassing a win and a loss. Between victories on November 16, 2014 and March 10, 2021, Grosenick went 2,305 days without an NHL victory, the seventh-longest gap between NHL victories by a goaltender in league history.

Tonight will be Grosenick’s first career appearance against Colorado.

In terms of skaters, well, really anything is an option. It’s the last game of the season, there was no morning skate to guide our direction and the Kings are coming off of a 6-0 loss that McLellan said lacked effort.

As it stands right now, the options to enter into the lineup include Kurtis MacDermid and Christian Wolanin on the blueline and Matt Luff at forward. It would not be surprising, considering last night’s result, to see some changes with how the Kings line up this evening, but for that, we wait until closer to puck drop.

AVALANCHE VITALS: The Avalanche are playing tonight both for playoff seeding and the first team trophy awarded in 2021. A Colorado victory would lock up both the top seed in the West Division, as well as the Presidents Trophy for most points in the NHL during the regular season, which comes with home ice throughout the playoffs. A Kings victory would bump the Avalanche to second in both races, with the Vegas Golden Knights claiming the spoils.

Here’s how Colorado lined up in yesterday’s victory –

Goaltender Jonas Johansson is expected to start tonight for the hosts, splitting the games with Philipp Grubauer as they did at STAPLES Center this past weekend. Johansson made 16 saves on 18 shots on Saturday, as he earned the victory in his first career game against the Kings. Since joining Colorado via trade, Johansson is 4-1-1 from seven appearances, with a .907 save percentage.

Where To Go From Here

A flat, 6-0 defeat in the team’s second-to-last game of the season was, from so many perspectives, not what anyone was looking for yesterday.

When asked what he specifically didn’t like from yesterday’s game, McLellan answered simply with “the first period, the second period and the third period.”

By my math, that accounts for all 60 minutes.

It’s rare that the Kings have been criticized for their effort this season. There have been games where the Kings have simply been outmatched by a better team, and you could probably put both games against Colorado at STAPLES Center into that category. 3-2 defeats, against a good team, but the Kings competed. Last night though was different. We all watched the game, we don’t need to beat down specifics. When asked what the team needs to do differently tonight, to end on a better note than Wednesday, McLellan said the following.

“Well, it’s quite obvious, I think we need an effort, we need a group of guys that actually care about finishing the season,” he said. “Individual pride. And it’s not too much to ask a group to work for 60 minutes. We might not have the skill, we might not have the quality of team that our opponents have tonight and the same group tomorrow night, but we have a lot more in us than we showed. It’s quite disappointing.”

The words character and intangibles have been thrown out several times as areas for evaluation down the stretch. Last night was likely not a checkmark in the positive column for many. How the team responds tonight, playing against one of the NHL’s top teams that still has everything to play for, will be one final evaluation in that department.

Anderson will finish the season as the NHL’s leader in time on ice by a rookie skater this season. Anderson surpassed K’Andre Miller of the New York Rangers yesterday, with still tonight’s game in hand.

Anderson has skated 1,119:26 so far this season, 37 seconds ahead of Miller with both defensemen appearing in 53 games this season. 53 games and two of the most promising young defensemen, both American-born, in the game were separated by less than a shift in total time on ice.

Goaltender Cal Petersen, defensemen Matt Roy and Christian Wolanin as well as forward Trevor Moore were all named to Team USA’s roster for the World Championships in Latvia, beginning later this month.

This will be Wolanin’s second World Championships, after he appeared in six games as Team USA reached the quarterfinals in 2019. Petersen was on the 2017 team, also a quarterfinal defeat for the Americans, but did not appear in a game as the third goaltender behind Jimmy Howard and Connor Hellebuyck.

As McLellan said yesterday, an incredible opportunity for any and all to represent their country when called upon.

“I think, any time your country calls you, if you’re healthy and in your family life, everything is under control, I think you should consider the opportunity,” McLellan said this morning. “I personally have had the opportunity to do that, numerous times, in a coaching role and it’s one of the best experiences I think somebody can have.”

We could still expect to see a few more Kings named to their respective rosters in the coming days as the rosters continue to circulate.

Insiders, we’ve reached the final game preview of the season for the Kings. 60 more minutes of hockey, coming up tonight.