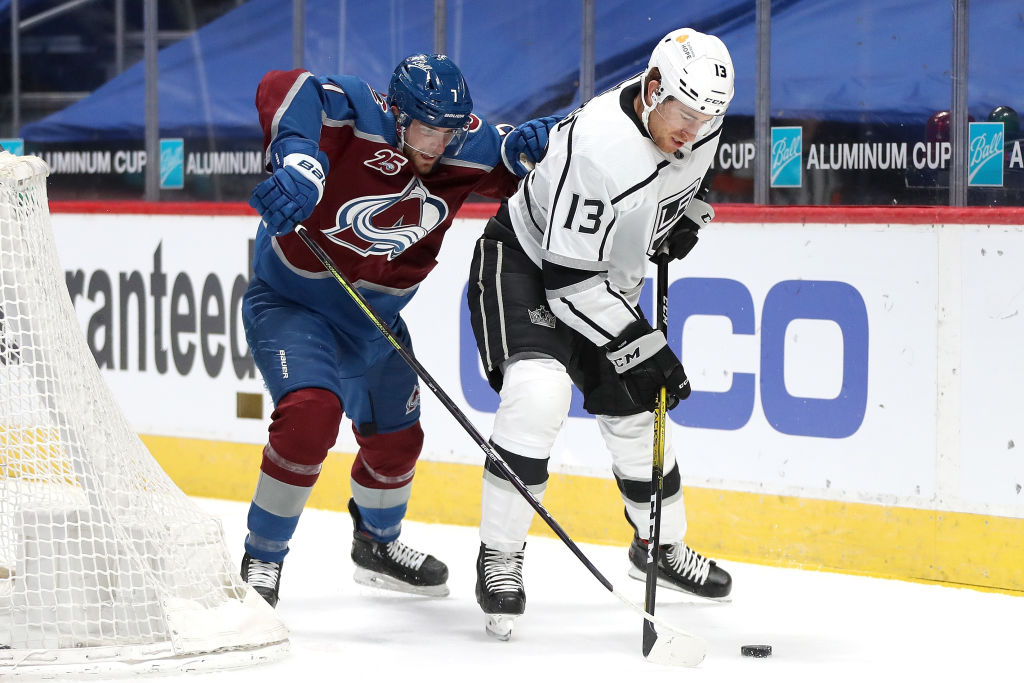 TONIGHT’S MATCHUP: The Kings hit the ice tonight for the penultimate game of the 2020-21 regular season, with the first of two games in two days against the Colorado Avalanche.

HEAD-TO-HEAD: As is the case against most opponents, forward Anze Kopitar leads the Kings with five points (0-5-5) from six games played this season against Colorado, while defenseman Sean Walker leads LAK blueliners with four points (1-3-4). Forwards Adrian Kempe and Gabriel Vilardi have each scored two goals against Colorado this season. The Avalanche are led by forward Mikko Rantanen this season, who has tallied eight points (4-4-8) from six games played, and has points in ten straight games versus the Kings, dating back to 2018.

KINGS VITALS: The Kings hit the ice for their final morning skate of the season today, an optional skate, after a full-team practice yesterday in El Segundo.

Tonight’s probable starter, Cal Petersen, has posted a .926 save percentage and a 2.66 goals against average from five starts this season against Colorado, but has found himself on the losing end of all five games, despite allowing three or fewer goals in all five games.

After this morning’s skate, Todd McLellan said that the team is not dealing with any long-term injuries amongst the group that traveled to Colorado, and that he’s just waiting on some final updates on short-term stuff, more in the bumps and bruises category, regarding tonight’s availability. Assuming everyone is good, McLellan said he is not anticipating any lineup changes.

That assessment seems to bode well for defenseman Sean Walker, who missed yesterday’s practice with a lower-body injury and was deemed as “day-to-day”. Walker has seven points (2-5-7) from six games played so far in May, tied for the most amongst defensemen leaguewide so far this month.

Up front, the Kings did not have any apparent changes from Monday to today, with the same forward lines expected at this time, though that is always subject to change.

Assuming Walker goes, here’s how the Kings lined up on Monday, with the current expectation that we don’t see any changes –

AVALANCHE VITALS: The Avalanche have their playoff berth locked in, but are still playing for seeding, with 1, 2 and 3 all still in play. Colorado, which currently sits in second place, would lock up the number one seed in the West Division with victories both tonight and tomorrow over the Kings, but could fall to third with regulation losses in both games and a pair of Minnesota victories over St. Louis. So, with home-ice advantage for the postseason at stake, in both rounds one and two, Colorado certainly has much to play for.

Here’s how the team lined up on Monday, in a win over Vegas –

From the above alignment, Colorado will play tonight without their number-one center in Nathan MacKinnon, who will miss tonight’s game, but should be set to return for the playoffs. Defenseman Samuel Girard is expected to return from injury tonight, in place of defenseman Jacob MacDonald, so expect at least a couple of changes on the Colorado front.

In net, Philipp Grubauer is the expected starter, as he looks to continue his strong play against the Kings so far this season. The German goaltender is 4-0-0 from four starts, with a .943 save percentage and a 1.25 goals against average, along with one shutout. Grubauer is Colorado’s number one heading into the postseason, ranking inside the NHL’s Top 10 in several categories.

Throughout the course of this season, the Kings rarely strayed from the top line of Alex Iafallo – Anze Kopitar – Dustin Brown.

By possession metrics, and raw scoring metrics, it made sense with that trio controlling more than 55 percent of shot attempts while together this season and all three forward experiencing upticks in offensive production from the season prior, on a per-game basis.

As the Kings cooled, so did the production, however, and what resulted was Iafallo being moved with a new centerman for the first time in a long time, skating with Gabriel Vilardi, as well as Lias Andersson, on what has become the team’s second line. Though overall shot attempts have been just about even as a unit, scoring chances are over 58 percent, and high-danger chances are a whopping 81.8 percent in the Kings’ favor with those three on the ice at 5-on-5. Naturally, 81 percent is not a sustainable total over the course of an 82-game schedule, but it’s translated to the most consistently productive group for the Kings since they were put together five games prior.

In four straight games, that line has produced a “low-to-high” goal, with a pass or a rebound created from the goal line area finding a player in a good scoring position in front. That has been a big part of that line’s success on the high-danger chances. McLellan pointed to their ability to shoot pucks and then get pucks back as positives of that unit, and something they’ve done consistently since they were put together.

“If you go back to some of the opportunities they’ve been able to create, a lot of times the initial shot, I’m not talking one or two seconds before they score, maybe five or six, the shot has come and they’ve went and retrieved the puck,” McLellan said. “Whether it’s the D coming down and pinching, somebody covering, whether they get into a situation where their recovery is quicker than the defending team….those guys have played some grinding, shooting, get it back on the garbage type shifts lately, and they’re getting rewarded for it.”

There hasn’t been one player dragging the other two along, by any means, all three have been consistent and productive. From my point of view, Iafallo’s game and Vilardi’s game are a strong match for each other, and that has proven true thus far, with Andersson fitting in nicely as well.

Speaking with Vilardi the other day, he noted all of the things Iafallo does to make life easier on those he’s playing with. He’s not the first center who has enjoyed playing with the Western New York native, and it doesn’t seem to come as much of a surprise to hear it at this point, either.

“He’s very easy to play with, I’m sure you’ve heard that from many people,” Vilardi said. “He’s very consistent every night, you know what you’re going to get from him. He works, he’s hard on the forecheck, he has great hands, good vision, he does a lot of small things that make everyone else’s job easier. He attracts guys to him in the d-zone, just by how hard he works, so it makes things easier for his linemates, it gives you more space.”

Expect to see that line continue together tonight, and likely tomorrow as well, with the hope of continuing the strong finish to the season for all three members.

It was reported this morning that three Kings players – Jaret Anderson-Dolan, Gabriel Vilardi and Sean Walker – were on Team Canada’s preliminary list for the 2021 World Championships.

“I think, any time your country calls you, if you’re healthy and in your family life, everything is under control, I think you should consider the opportunity,” McLellan said this morning. “I personally have had the opportunity to do that, numerous times, in a coaching role and it’s one of the best experiences I think somebody can have.”

Naturally this season presents different challenges, if you will, in terms of accepting the call.

It’s been a long season in more ways than one, with the challenges that COVID has presented. Players choosing to attend the IIHF World Championships would now be extending that season, in Latvia, for likely close to another month. It’s challenging in that way, as McLellan noted, but he was still highly complimentary of the experience for those who do decide to accept.

“It adds to a long season, it adds to a messed up season, when you think about COVID and the protocols, and that certainly takes its toll on an individual or a group,” McLellan said. “The experience that anybody that goes to those tournaments can gain from playing a different type of hockey, playing on the big ice, listening and learning form a different coaching staff, being around other players that have more experience, or sometimes less experience than you, I think there’s so many positives that can come out of it, I think it will be a great experience for them.”

The trio on Team Canada likely will not be the only players from the Kings that will participate, with names and rosters trickling out here over the last week, something that will continue in the coming days as we approach the tournament. It was already announced that two Kings staff members – Dana Bryson (equipment) and Jon Gomez (media relations) will represent Team USA.

More to come on that front, with games beginning on May 21.

Beginning tonight, though, is the final series of the season for the Kings. Los Angeles and Colorado, from Ball Arena, tonight at 6 PM Pacific.