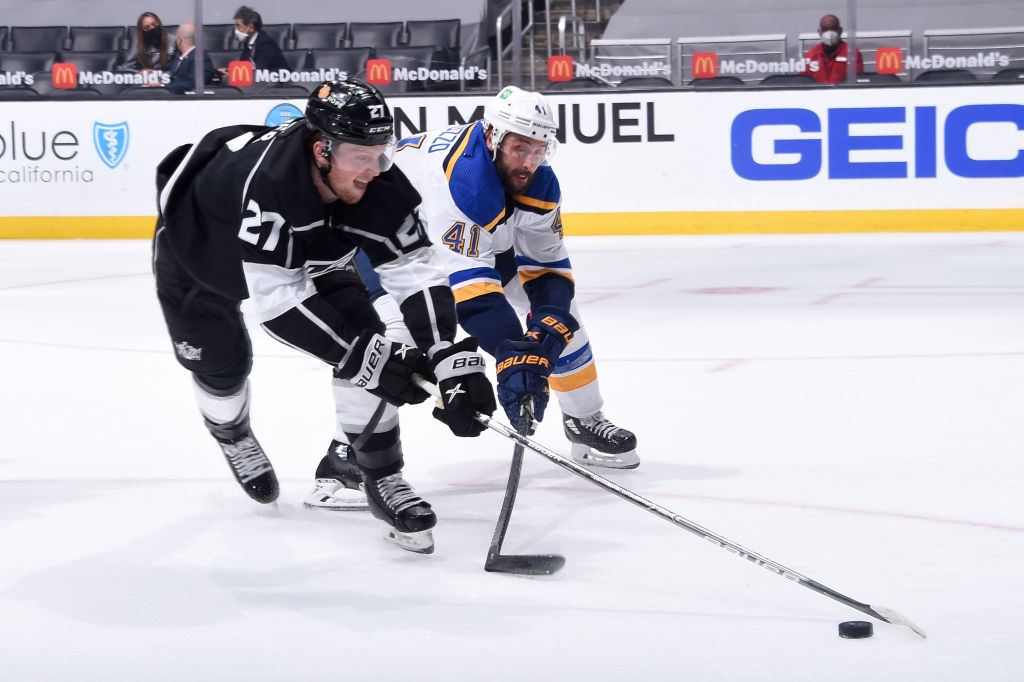 Yesterday’s home finale against the St. Louis Blues was either positive or negative, depending on which end of the rink you focused on.

Overall, last night’s game was an extremely low-event game, at least for the first 40 minutes. If you think back, what was the best chance from the first two periods? I’ve thought about it and can’t pinpoint a true, Grade-A, throw your head back that it didn’t go in chance for either team.

Things opened up a bit in the final period, but the story of the game was low-event. In fact, just once this season did the Kings play a game with fewer high-danger chances for both teams combined, which, ironically enough, it also came against St. Louis in a 2-1 victory back in February.

So, you can look at last night’s game from two angles – The Kings were good in their defensive zone, limiting a quality opponent to very few good opportunities. Or, the Kings didn’t create nearly enough offensively to win a game.

And either way you went, you’d be right.

The Kings broke the puck out of their own zone very well last night, and rarely did they find themselves trapped in their own zone for an extended spell defensively. Over the weekend, Colorado rolled momentum over between lines, putting together shift after shift in the offensive zone at times. There was little of that going on last night against the Blues.

“I thought we were, for the most part, responsible, we broke the puck out of our end quite well tonight, which was a good thing,” Todd McLellan said. “The first goal they scored on, we missed on the backcheck that we should have picked somebody up, but other than that, there weren’t a lot of mistakes defensively. In overtime, the puck bounced over Kempe’s stick and they took advantage of it, but defensively, fairly satisfied with the game.”

Offensively, though, there was not a ton to report.

The goal that the Kings got was a perfect example of how the Kings can score. Battle won along the boards, one direct pass from Gabe Vilardi to a player in a good area on the ice, good finish by Alex Iafallo. But there wasn’t enough of that direct play to get the win last night, as McLellan explains.

“Offensively, I thought, for a team that really has to work hard to score, I thought we got cute, we wanted to make plays when we should have been shooting the puck and it probably cost us the game,” he noted. “When we play direct, when we play North – South, when we play to the paint, we have a better chance of winning. When we play East – West, when we play through the slot, one side of the rink to the other, I don’t think it favors our team. We’re still trying to figure that out, eventually we’ll get it.”

The Kings continue to be in an individual evaluation mode, but it’s still challenging to watch these games without at least an eye on team performance. It’s easier to see standout offensive performances than it is to see them on the defensive end, which made yesterday’s game a difficult evaluation at times. But seeing the team tighten up defensively, just two games after McLellan was disappointed in the team’s defensive awareness, was in many ways a positive.

Following the game, McLellan wasn’t shy about the fact that the Kings of this week will likely not be the Kings of October, ideally in more ways than one.

He talked about the need to input more talent into the lineup, with at least some of that likely coming from outside the organization.

“We’ve got to sit down and evaluate the players that we have here,” McLellan said. “I know they’re not all going to be back, we’ve got to go out and recruit, find some other players that can help us. I think we have a lot of work to do still.”

He also talked about how the younger players on the team need to take the next step in their development in order for the Kings to do so as a team. It’s all well and good to talk about having a collection of highly-regarded young players, which the Kings can say perhaps as well as any team in the league, but it’s all talk until we see the next steps on the ice.

This offseason, heading into next season, will be perhaps the biggest test of that yet in the organizational rebuild.

“Our younger players, that have been in the league now for a year or two, must show improvement,” McLellan added. “They have to begin to carry more of the load, offensively, defensively, game management, it’s a must that they graduate and move on to the next level, break through. That’ll be a big challenge for us as a team. If we get that breakthrough and we augment the team a little bit with some players, we’ll be okay. If we don’t get the push through to the next level from a lot of players, it’ll take us more time. We need it from them, and they’ll be directed that way heading into the summer.”

The final two games of the season will be taken in with the same long-term lens as the three games at home over the last four days were taken. The wins and losses at this stage aren’t necessarily what is important, but seeing the team execute the right way, win or lose, is what we should be focused on.

You hate to keep beating a dead horse, but the Alex Iafallo – Gabriel Vilardi – Lias Andersson line has continued to do that, combining for the Kings lone goal yesterday. Those three players have combined for 12 points from the five games they’ve been together as a unit.

From a possession metrics standpoint, the third line with Rasmus Kupari at center, between Austin Wagner and Trevor Moore, controlled more than 88 percent of the shot attempts yesterday. That’s prettttty good no matter how you shake it.

Right there, that’s six forwards who are all vying for their place in the organization, and we’re only touched on two lines.

The Kings are guaranteed to finish somewhere between seventh and eleventh in the draft lottery standings, with five teams plus Seattle undoubtedly below them….or above them? Either way, the teams in slots 1-6 are set. The results to look for are San Jose’s final game, tonight against Vegas, plus the Canadian division results for Calgary, Ottawa and Vancouver, combined with points the Kings pick up, or don’t, in Colorado.

Two more to go, Insiders. See you tomorrow for the final morning skate of the season, before the penultimate game versus the Avalanche. Fingers crossed for no snow.