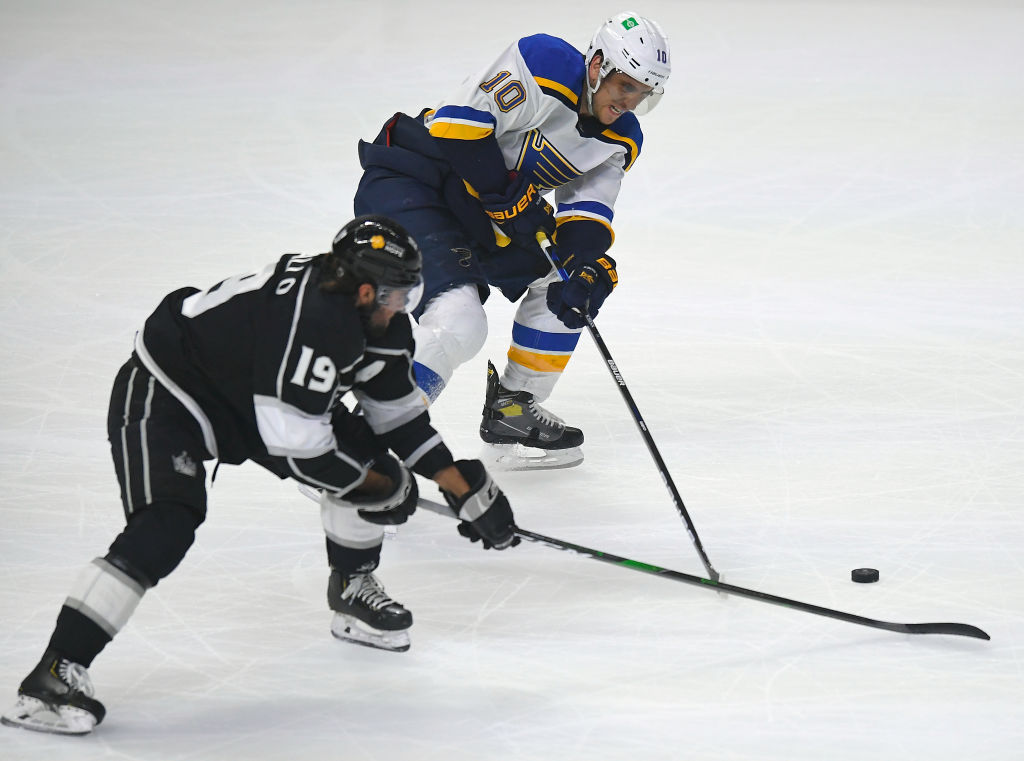 In a game that found offensive opportunities to be at a premium throughout, the Blues capitalized once more than the Kings did, skating away with a 2-1 victory in overtime in the final home game of the 2020-21 regular season.

The first period started off flying, with very few whistles in the first half of the opening frame. The latter half featured an almost fight between Lias Andersson and Dakota Joshua, which resulted in only roughing minors. Each team had one power play in total, with neither converting, while the Kings ended the opening frame with a 6-5 advantage in shots on goal.

The second period featured more of the same, with neither team finding the back of the net. St. Louis defenseman Justin Faulk had the best chance of the middle stanza, as his shot from the center point hit the left post and pinged out, keeping the two sides without a goal through 40 minutes.

St. Louis opened the scoring just 85 seconds into the third period, as Tyler Bozak broke the 0-0 deadlock. A nice passing play by the visitors left Bozak alone in front, and the veteran centerman went to his backhand to slot the puck past Kings netminder Cal Petersen for the game’s first goal.

The Kings evened the score just over six minutes later, as Gabriel Vilardi fed Alex Iafallo in the left-hand circle, where the Eden, NY native wired a shot past Jordan Binnington to knot the game at one. The goal extended Vilardi’s point streak to four games, with Iafallo collecting a point for the fourth time in five games.

After some play down the stretch that featured a power play each way, but no goals, St. Louis won in overtime, capitalizing on a 2-on-1 rush. David Perron fed Justin Faulk off the odd-man rush, and the defenseman beat Petersen from close range to end the game with a 2-1 final.

The game caps off the season series for the Kings and Blues, with LA posting a 5-1-2 record from the eight head-to-head matchups. The Kings will finish the season as one of just four teams in the NHL with single-digit wins at home, with nine from 28 games played.

Hear from Vilardi and Head Coach Todd McLellan from after tonight’s game.

On the team’s checking and defensive effort tonight
I did, I thought we were, for the most part, responsible, we broke the puck out of our end quite well tonight, which was a good thing. The first goal they scored on, we missed on the backcheck that we should have picked somebody up, but other than that, there weren’t a lot of mistakes defensively. In overtime, the puck bounced over Kempe’s stick and they took advantage of it, but defensively, fairly satisfied with the game. Offensively, I thought, for a team that really has to work hard to score, I thought we got cute, we wanted to make plays when we should have been shooting the puck and it probably cost us the game. When we play direct, when we play North – South, when we play to the paint, we have a better chance of winning. When we play East – West, when we play through the slot, one side of the rink to the other, I don’t think it favors our team. We’re still trying to figure that out, eventually we’ll get it.

On what he liked specifically on the defensive end, and limiting the Blues’ shot totals
As I said earlier, I think we broke the puck out fairly well tonight. Our neutral zone set up our breakouts, and we were able to come out of our zone, we weren’t under siege for very many shifts and therefore they didn’t get that “shoot and get it back” mentality. St. Louis isn’t a volume shooting team to begin with, they like to hold onto the puck and set up for one really good shot, and I thought we defended well against it, but the big part was the breakout part. We’ve been stressing that lately, working into position and moving the puck quickly enough. I thought we did a good job and that helped us with our defensive play.

On if he’s confident that the system and structure will flourish as the team develops and adds talent to the roster
We have work to do. We’ve got to sit down and evaluate the players that we have here. I know they’re not all going to be back, we’ve got to go out and recruit, find some other players that can help us. I think we have a lot of work to do still. We’ve got to keep the veteran players – obviously Quickie and Brownie haven’t been playing in these games due to injury – we’ve got to keep them at a high level and get them back there when the season starts next year. Our younger players, that have been in the league now for a year or two, must show improvement. They have to begin to carry more of the load, offensively, defensively, game management, it’s a must that they graduate and move on to the next level, break through. That’ll be a big challenge for us as a team. If we get that breakthrough and we augment the team a little bit with some players, we’ll be okay. If we don’t get the push through to the next level from a lot of players, it’ll take us more time. We need it from them, and they’ll be directed that way heading into the summer.

On what it meant to have the fans behind the team one last time this season
For us as an organization, it meant a lot. Obviously a messed up year for everybody outside of sports, but for us in particular, with hockey, having to play in front of empty buildings, empty arenas, over and over again, finally getting people back in made a huge difference, you could feel the energy. I think as the [games] went on, our fanbase seemed to grow, or became more active in the games, maybe we gave them more to cheer about. I thought the last game, we could really feel it and tonight it grew even more. I thank our fans for showing up, I wish them a healthy summer and hopefully when we get back in here, we’ve got 20,000 people on opening night and it feels incredibly different. That lift that they can give us, we’ve missed for a long time.

– Forward Gabriel Vilardi tied an NHL career-long scoring streak at four games, extended with the primary assist on Alex Iafallo’s goal.
– Iafallo now has points in four of his last five games, and scored the only Kings goal of the evening
– With the secondary assist on Iafallo’s goal, defenseman Olli Maatta tallied the 99th helper of his NHL career.
– Cal Petersen has given up three or fewer goals in all six of his career starts against St. Louis, including all five this season.
– The Kings played their first game of the season that did not feature a goal by either team through the first 40 minutes.
– 3 of the 4 games between the Kings and Blues this season at STAPLES Center went into overtime.
– Tonight’s game was the final home game of the season for the LA Kings. The Kings finish with a 9-14-5 record at STAPLES Center this season.

The Kings are scheduled to practice tomorrow at 10 AM, in advance of the team’s trip to Colorado. The team will conclude the regular season with games on Wednesday and Thursday in Denver.