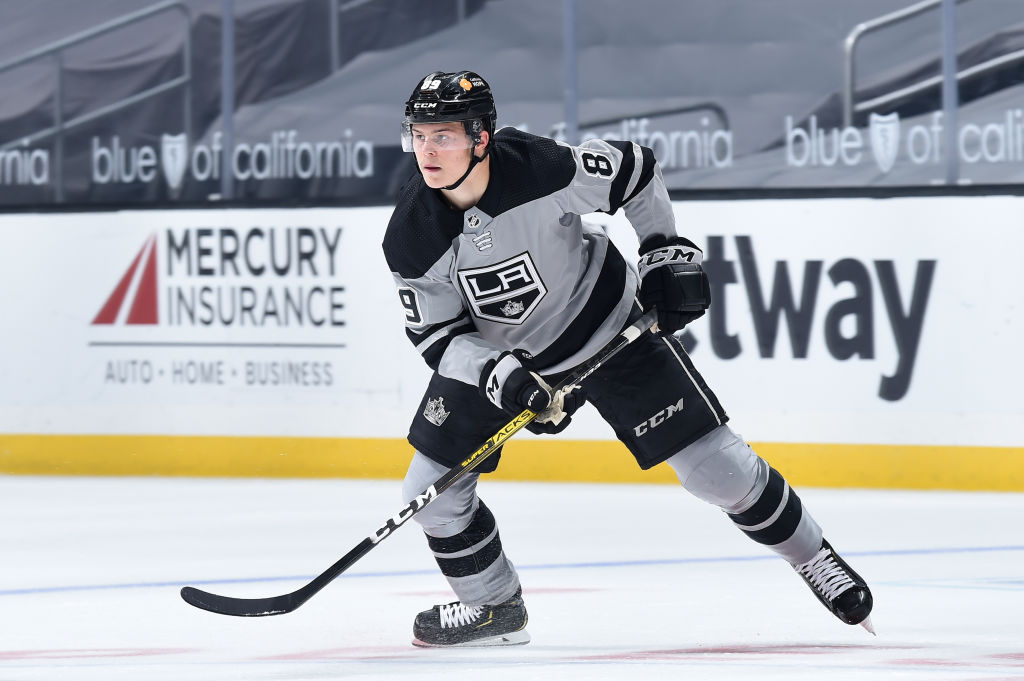 For the second consecutive game, the Kings pulled themselves to within a goal in the third period but were unable to find that next one, in another 3-2 defeat against the Colorado Avalanche.

The Avalanche scored the game’s first two goals, as a part of an opening half of the first period that was spent mostly in front of the Kings net. First, Colorado capitalized on a defensive miscue, which left Devon Toews alone in the slot, where he buried off the post and in for the game’s first goal. Just past the midway point of the opening frame, the Avalanche made it two, as Cale Makar scored on a one-timer from the center point for his second goal in as many nights.

Los Angeles pushed back, however, as they didn’t allow a shot on goal for the rest of the first period following Makar’s tally. The Kings then got on the board just over six minutes before the intermission, as Gabriel Vilardi threaded a pass to a charging Sean Walker, who corralled the puck off his skate and buried his fourth goal of the season to cut the deficit in half.

Colorado scored the lone goal of the middle stanza, with the Makar – Toews pairing combining yet again. Makar fed Toews across the high slot, and Toews fired top shelf, over Petersen’s glove hand, from the top of the circle for his second goal of the evening.

Kings forward Rasmus Kupari pulled his team within one early in the third period, with his first career NHL goal. With the hosts just coming off of a man advantage, Lias Andersson fed Kupari in the low slot, and the rookie forward beat Colorado netminder Jonas Johansson with a wrist shot to make it a 3-2 game.

Down the stretch, the Kings played with heart and had a few good looks to potentially tie the game, but for the second straight night, they came up one short, with Colorado winning by a 3-2 final.

Hear from Kupari and Head Coach Todd McLellan from after tonight’s game.

On the team’s play tonight, and the character and intensity shown
I liked our game tonight. There were moments where I thought, early, we were maybe a little bit intimidated, they are a very good team, but I thought once we started to play, we were aggressive, our forecheck was much better than it was yesterday. I liked our game. We made a few mistakes and against a team like that, with their ability to score, they make you pay. The character and the drive, there’s nothing there to question. Our guys showed up with it tonight, they pushed and they played hard to a man, right through the whole lineup. While it’s disappointing losing, there are some positive signs, especially playing in that type of game. That third period was as fast a period as we’ve played in a long time.

On what he liked most from the team in the third period
The forecheck, we made a few adjustments to our forecheck, changed a few things up, the guys bought into it. I thought we were a lot more aggressive, it didn’t hurt us defensively and it created a couple of power-play opportunities. I’m not sure if the goal that Ras scored was a power-play goal or not, it was right at the end, but after that, we pushed and we challenged them to be a real good defensive team, which they were and are. We were close, but those are moral victories. We’ll take some of them right now, as we wind things up, but eventually, moral victories don’t get you a whole lot and we have to get better as a team. I’m actually pleased that we’re playing against teams like Colorado and St. Louis to finish the year, because as I said yesterday, it gives us a great evaluating tool, there’s nothing easy about playing against these teams and we get to evaluate against the best.

On Rasmus Kupari settling in and getting his first career NHL goal
Yeah, you used the word settled in, I think he was better in the second half of the game, but our whole team was. He transported puck well, I thought he skated with authority when he had it, he made some nice plays to keep pucks alive in the offensive zone. The goal was a great play by Lias, to look off, and one of the things that Ras has is a heavy, accurate shot and he used it in that situation. Our bench was excited for him, I know he was real excited. He’s got a memory now, and hopefully there’s a lot more to come.

On the things he feels Kupari improved on from his first stint
Obviously his game has improved, the more experience he gets at the American League level the better. Fortunately for him, he’s playing on the power play there a lot, he’s been able to penalty kill, he’s one of the go-to guys, and that transfers over into confidence at the NHL level. That’s where we’re at as an organization. Some of these kids could be here probably a little bit longer, and a little bit more, but they won’t get what they need. Playing down there is a great thing for many of them. Quinton, Rasmus, Lias has a ton of confidence right now because he was patient enough with us to go there and find his game. He’s become a very effective player for us. It’s a real good tool for us to have that American League team here.

On his focus points in terms of player evaluations in the final three games
We’re looking for the character part, and that is as important right now, at this time of the year, as structure, passing, skills, all those types of things. We passed that test tonight. We plan on giving them a few things to focus on each night, tonight was forecheck and a few adjustments to see if we need to change the way we play a little bit. I liked our forecheck tonight, it was the first time in a long time I thought we were more aggressive. We’ll give them assignments that way, there’s some targets that we need to hit, power play, penalty kill, some 5-on-5 goals that we want to achieve down the stretch. The pure organizational evaluation of individuals right now. If you haven’t already won a job or lost a job, this is when it’s beginning to really happen. We’ll probably remember the last five games a lot more than we’ll remember the first five, so without putting pressure on a whole bunch of players, that’s just how it is. Next year, another crop comes in and it challenges. Attrition is a good thing for every team in the league and we’re getting younger and we’re moving forward. If you’re not along for the ride, if you’re not getting better, we’re going past you. A great challenge for some of the guys that have been here for a little while, keep your job.

The Kings are not scheduled to practice tomorrow, following the back-to-back this weekend. The team is slated to return to the ice on Monday, for morning skate in advance of the home finale versus St. Louis.