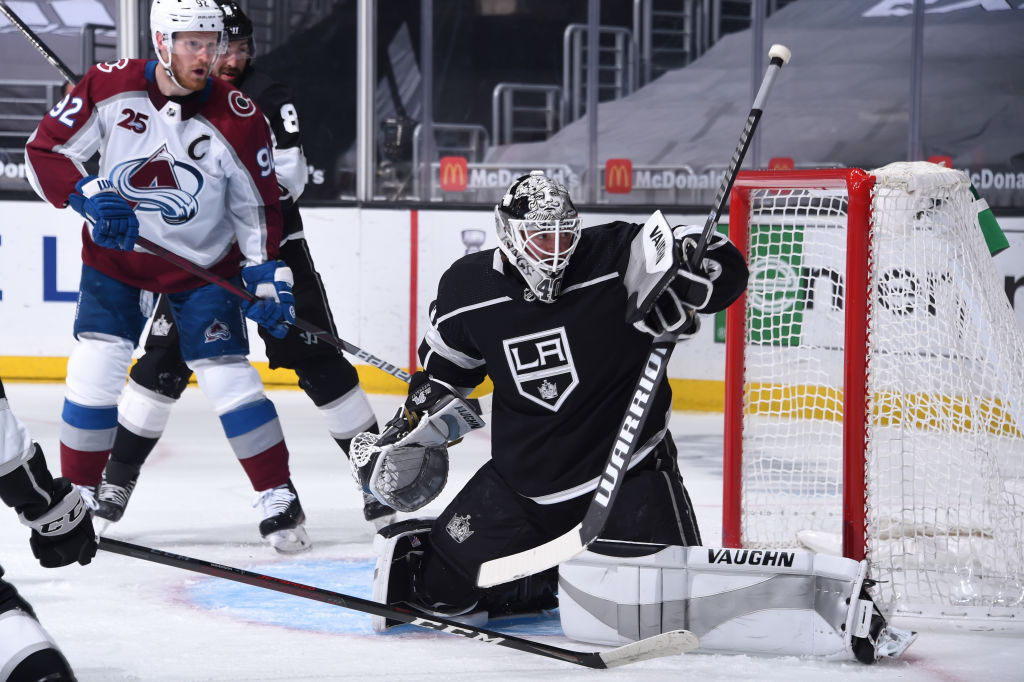 On a night when the Kings celebrated one of their all-time greats, in honor of Anze Kopitar’s 1,000th career NHL point, the final score from the game that followed was not quite poetic for the accomplishment, as the Colorado Avalanche skated to a 3-2 victory at STAPLES Center.

The loss mathematically eliminated the Kings from postseason contention, coupled with St. Louis earning one point against Vegas.

Similar to Wednesday evening, the Kings traded early goals, with both sides finding the back of the net inside the first six minutes. First, the Kings opened the scoring just over two minutes into the game, as forward Brendan Lemieux crashed the net and buried a Carl Grundstrom rebound for his second goal as a King, his fourth in total this season. The Avalanche equalized less than four minutes later, however, as Mikko Rantanen converted on the power play to knot the score at one, with a one timer from the right-hand circle.

Colorado scored the only two goals of the second period, to take its first lead of the evening. Less than three minutes into the middle stanza, Tyson Jost beat Cal Petersen through the five hole, from the left-hand circle, to put the visitors ahead. The Avalanche struck again just past the halfway mark of the game as Cale Makar moved untouched through the slot, outwaited Petersen and tucked home his side’s third goal of the evening.

The Kings got one back late, through forward Gabriel Vilardi, who put home a Lias Andersson rebound on the backhand from close range, to pull his team within a goal with less than three minutes to play. The hosts could pull no closer, however, with the 3-2 final standing up.

Hear from forward Alex Iafallo, who wore an “A” for the first time in his NHL career this evening, and Head Coach Todd McLellan from after tonight’s game.

On if tonight’s game showcased the depth of Colorado, allowing them to play so well with many players out
Definitely. No MacKinnon, no Girard, Saad is out. By the time the playoffs get around and they get healthy, that’s why they’re one of the favorites to win. That’s a real good game for us to play, and a great game for us to evaluate where individuals are. We’ve got a long, long way to go to close the gap, but I think it’s better for us to play in these games right now than to have some token games against some teams that maybe aren’t in the playoffs. It’s a good evaluator.

On the things he’s looking at when evaluating from a game when the Kings had less of the puck
A lot of it is our defensive awareness in play and game management. They’re so good off the rush and so good off of transition, they do such a good job of drawing players to the puck and finding open people off of it. Makar’s goal, their third goal, is a prime example. The player delays, we all migrate to the puck and they hit the late guy. We’ve talked about it and talked about it and we still have players that have a real tough time not chasing the puck all over the place. Reading the dangerous area of the ice, taking that away, but some of that is experience. Maybe some aren’t going to get it, others are going to improve, but that’s where we’re at right now and we just continue to sort it out.

On his evaluation of Quinton Byfield, after likely his last game with the Kings this season
From a coaching perspective, I think he’s a trusting player, and why do I say that about a young, 18-year-old? Because of the way he comprehends things and how he applies them, puts them into the game. I thought he improved as time went on, it was a big test for him to play tonight. He supported the puck really well on a lot of the breakouts, he won battles, he showed escape skills with the puck. I think he had vision and wanted to make plays, sometimes they were knocked down, but he’ll get used to the pace of play and wingers will get in better positions for him over time. He’s certainly an NHL player at the age of 18, I can’t wait to see him when he’s 22.

On if he believes Byfield is an NHL player on a full-time basis next season
We’re going to count on that right now. He’ll have to come back and earn his spot, like everybody else does, but I don’t see any reason why he can’t play. A lot will depend on who’s around our roster and what it looks like, but he’ll need some support, certainly. I think he has the tools to do that.

On Alex Iafallo wearing the “A” tonight, and what it says about him as a leader
I don’t think you have to be a leader to wear a letter, in fact I think these pieces of felt, and I’ve said it before, are way overrated. If you change the character, or the type of person you are, when a “C” or an “A” is put on you then shame on you. Alex didn’t play out of character, he didn’t change his character at all, he’s been a quiet leader in the locker room. He leads by example on the ice, all the little things that he does, and it was quite easy to put it on him when Dustin couldn’t go.

– With an assist on the game-opening goal, defenseman Sean Walker has points in back-to-back games, and six points (1-5-6) over his last six games.
– Forward Gabriel Vilardi scored his 10th goal of the season tonight. Vilardi has goals in consecutive games for the second time this season, and became the seventh Kings player to collect ten goals in 2021.
– Forward Lias Andersson collected an assist for the second straight game, with the lone helper on Vilardi’s goal.
– Forward Alex Iafallo wore an “A” on his jersey tonight for the first time in his NHL career
– The Kings honored forward Anze Kopitar in a pre-game ceremony, to celebrate his 1000th career NHL point on Wednesday.

The Kings are not scheduled to hold a morning skate tomorrow, considering the back-to-back, and will return to action at 7 PM in a rematch versus Colorado.