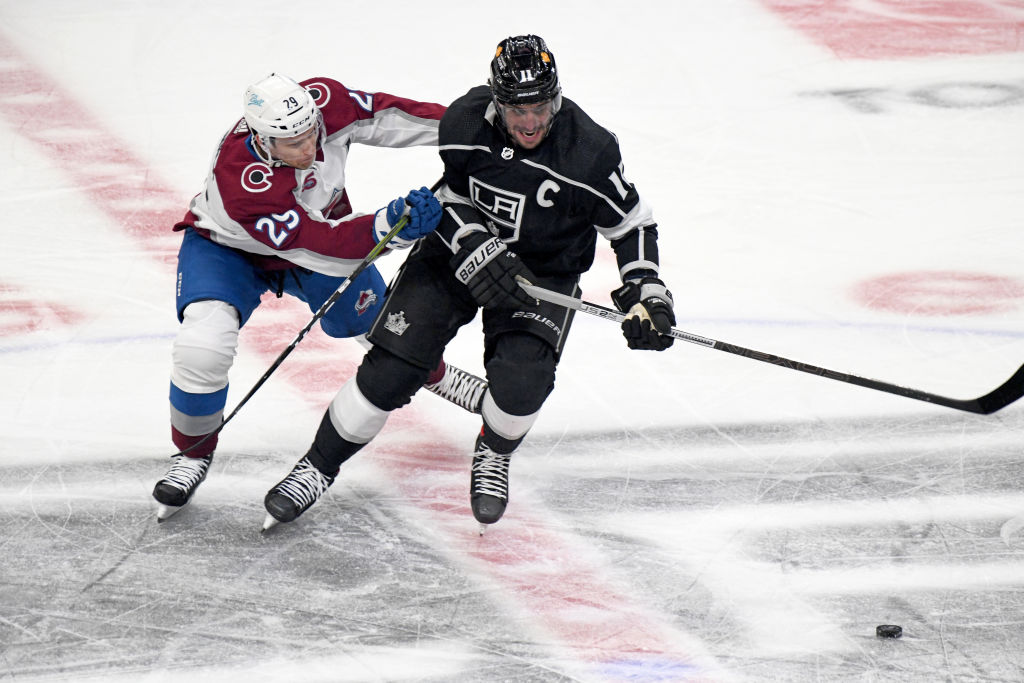 TONIGHT’S MATCHUP: The Kings and Avalanche will square off four times in the final five games of the season for Los Angeles, beginning tonight at STAPLES Center.

HEAD-TO-HEAD: Forward Anze Kopitar leads all Kings skaters with five points (0-5-5) from four head-to-head games played this season against Colorado, while forward Adrian Kempe is the lone King with multiple goals (2). Kopitar has 52 points (17-35-52) from 51 career games played against Colorado, one of five teams he’s over a point-per-game against in his NHL career. The Avalanche are led by forwards Nathan MacKinnon and Mikko Rantanen, who have each tallied three goals and six points versus the Kings so far this season.

With goaltender Jonathan Quick day-to-day with an upper-body injury, consider Cal Petersen as tonight’s likely starter. Petersen is winless from three starts versus the Avalanche this season today, but has posted a .936 save percentage and a 2.37 goals against average, averaging more than 36 shots faced per game.

This morning’s alignment had one major change to it, which was that forward Dustin Brown was not on the ice. The team announced today that Brown will miss the remainder of the season with an upper-body injury that he sustained earlier this year.

“It’s been going on for a little while, he’s a pretty tough character, he’s played through a fair amount lately,” Todd McLellan said of Brown this morning. “It doesn’t quite heal, it keeps reappearing, it’s just not good for him to keep going right now. He’ll get the treatment he needs and he’ll be back, ready to go.”

Considering the adjustment, here’s how the forwards lined up –

We could expect, from this alignment, to see Trevor Moore shuffled up with Anze Kopitar and Adrian Kempe, with Austin Wagner checking back in. That would leave the effective trio of Iafallo, Vilardi and Andersson together, as they were in Arizona.

Tonight, assuming he plays, is expected to be Quinton Byfield’s final NHL game of the season. With five games down, playing game number seven would activate the first season of his entry-level contract, which has Kings management has stated a desire not to do.

McLellan discussed Byfield’s progress this morning, how he’ll approach his young center as his NHL stint winds down, and the things he believes Byfield will continue to work and improve on, with a look towards the future.

“We’ll sit with him and we’ll talk to him about his game, it’s been ongoing since he’s been here, quite frankly,” McLellan. “There won’t be a big, grand see you later meeting, it’ll be real brief and to the point. He’s still a very young man, physically, it may seem odd to talk about a guy who’s almost 6-5 and well over 200 pounds, but there’s still strength and endurance, some of those things that he needs to continue to work on, as mother nature helps him continue to grow stronger. I think the understanding of how we want to play, the game that we play here, will be important for him to absorb and to concentrate on. One of the most impressive things about him is the questions he’s asked and how he’s been able to adapt. I think that’s a real positive sign. I think this is the type of player, without putting undue pressure on him, who can get better fast because he wants to, he asks real good questions and puts them into play.”

On the backend, defenseman Sean Walker collected three points in a game for the first time in his NHL career, with a goal and two assists on Wednesday. Walker had, by far, his highest expected goals total of the season at 1.43, and has seen an uptick in shot attempts over the last month, something that he has attributed to a mentality, and his head coach has taken note of as well. Skating and offensive integration are both key to Walker’s success, and he’s increased his performance in those areas as of late.

Hear from Walker below –

Forward Rasmus Kupari was added to the taxi squad this morning and skated with the team. Goaltenders Jacob Ingham (to taxi) and Matthew Villalta (to AHL) swapped places today, with Ingham also on the ice this morning.

AVALANCHE VITALS: Colorado has clinched a playoff berth and is currently fighting for seeding, with a finish anywhere between first and third still in play. The Avalanche currently sit in second in the West Division, four points behind division-leading Vegas with a game in hand, and one point ahead of third-placed Minnesota, also with a game in hand.

Goaltender Philipp Grubauer started Colorado’s last game, and is 3-0-0 against the Kings so far this season, with a .958 save percentage, a 1.00 goals against average one shutout. In his NHL career, the German-born goaltender is 5-2-0 with .953 save percentage and a 1.31 goals against average. Colorado is expected to split the games this weekend between Grubauer and Jonas Johansson.

Here’s how Colorado lined up in their most recent game, on Wednesday against San Jose –

After the issues that caused two games in Colorado between the Avalanche and Kings to be postponed last month, the visitors have just one player on the NHL’s COVID Protocol List, goaltender Devin Dubnyk. The Avalanche have several players out of the lineup due to injury, though none are expected to return to the lineup tonight.

In today’s opponent, McLellan knows that the Kings are facing one of the league’s best, as a title contender, which offers much to emulate.

“Their journey, where they are now, is one that we can look at as an organization,” McLellan said. “How they drafted, how they developed, some of the moves they made, the way they’ve augmented their star players, timelines for some individuals. There’s a lot that you can go into studying on teams, and Colorado is one of them. The pace and the attack mentality they play with is team wide, they have the tools to do it, a lot of depth. Their next step will be finding playoff success and deep into it.”

A lot of things to take away from this Colorado team, and with four games out of the next five against the Avalanche, plenty of time to do it.

The Kings will honor forward Anze Kopitar with a ceremony before tonight’s game, to commemorate his 1000th career NHL point on Wednesday in Arizona.

Kopitar became the fourth player to record 1,000 points with the Kings organization, and the first player born in Slovenia to hit the mark. Kopitar also joins Patrick Kane and Sidney Crosby as the only players drafted in 2005 or later to collected 1,000 career points in the NHL.

Kopitar’s teammates had nothing but incredible things to say about their leading scorer, their captain and their leader.

Andreas Athanasiou – It’s unbelievable. You grow up, you watch him a little bit as a kid, then you play against him, then you get the chance to play with him, it’s a pretty cool experience. He was one of my favorite players growing up, so it’s really cool just to be on the same team and be a part of his 1,000th point. Just being around it, it’s an unbelievable feeling for sure.

Drew Doughty – Kopi’s our leading point getter every single season. History tells that our team isn’t a scoring team, we’re a defensive hockey team, we take a lot of pride in it and that’s something he takes a lot of pride in, it’s what makes him one of the most complete players in the NHL. If Kopi’s out there, it doesn’t seem like [opponents] put the puck in the net too much, because he just he dominates when he’s out there. 1,000 points, not too many players in the history of the league have done it, and for him to be one of them is amazing. He’s just a great player, great leader, great person, we’re all very happy for him.

Trevor Moore – I honestly can’t even wrap my head around it, it’s unbelievable. To [get] to 1,000 points it doesn’t happen by accident, the guy does it right every single day. He’s here early, he’s always a guy you can follow and look up to and I’m super happy for him.

Sean Walker – I mean, it’s unbelievable to even be on the ice with him. I don’t think you can say enough about the person and player that he is. To watch him, night in and night out, produce at the level that he does is amazing. Very excited to see him reach that milestone, it’s special to be on the same team with.

Kings and Avalanche, coming up later this evening!

By Zach Dooley
1,045 Comments
Behind the Scenes

By Zach Dooley
1,394 Comments
Behind the Scenes