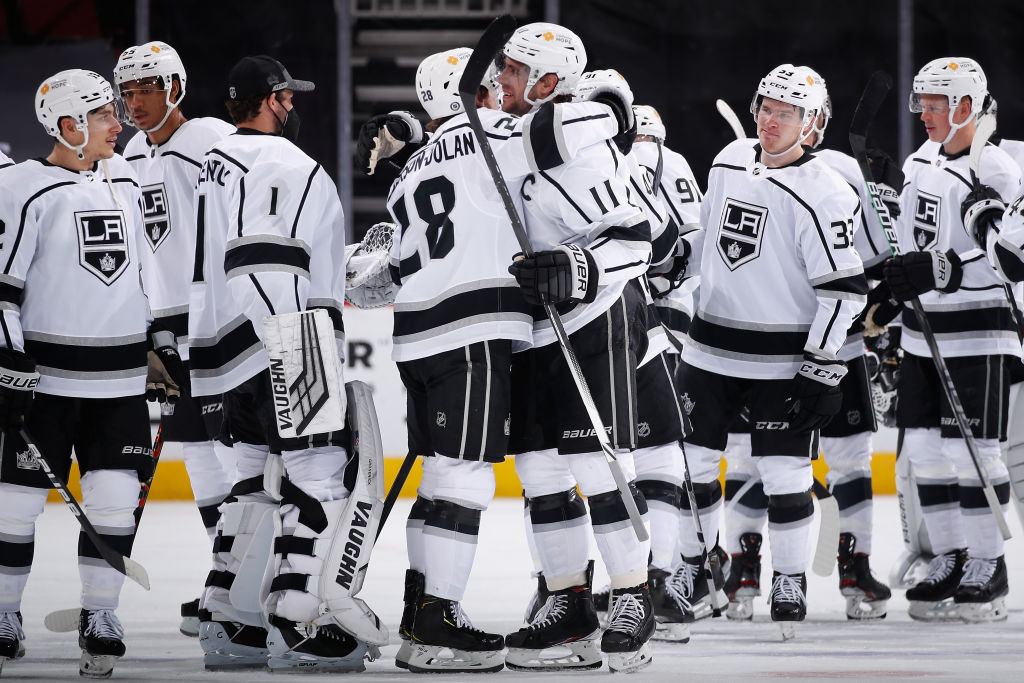 Typically, when we draw on an individual accomplishment in one of these series analysis articles, it’s to draw a positive away from a loss. The Kings lost, or split, but these three players did these things well.

It’s not all that often that an individual accomplishment overshadows a win, especially a series sweep on the road, but that’s certainly the case for Anze Kopitar. The veteran forward and Kings captain collected his 1,000th career NHL point on Wednesday in Arizona, with the lone helper on the empty-net goal that sealed a 4-2 victory. On Monday, the Slovenian centerman collected points number 998 and 999, which set the stage for a memorable evening two days later.

The impressive nature of Kopitar hitting such an incredible milestone, rightfully so, was the story from the two games in Arizona, two games in which the Kings played fairly well and earned their first two-game sweep in a long time.

Good for player, good for team.

“It’s very exciting and I’m sure it’s going to set in a lot more in the next few days, or weeks,” Kopitar said, after Wednesday’s game. “This one, it’s a little bit different than 1,000 games, because with 1,000 games, the excitement kind of builds up and when it comes, you’re kind of expecting it. This one, it just kind of hits you. It’s very exciting right now, my heart is still racing. I think it’s going to set in a little bit more in the next few days, weeks.”

In the days leading up to the milestone point, Kopitar’s teammates marveled at the accomplishment, and the man who was about to reach it. Trevor Moore said he couldn’t even wrap his head around the achievement. Andreas Athanasiou talked about watching Kopitar as a kid, then playing against him and now sharing the ice with him, and how special it is. Sean Walker had similar thoughts, calling it “unbelievable” to share the ice with him.

All three players, when asked the question, laughed and paused before answering, seeming to almost be reflecting themselves before finding the right word. Kopitar’s Head Coach, Todd McLellan, was proud of his captain, and called it an honor to coach him over these last two years.

“I’m certainly proud of him, but I’m honored to be able to coach him,” McLellan said. “It’s a pleasure to have that type of person around your locker room on a daily basis. He makes everybody better, including the coaching staff, and his passion and energy for the game is contagious. There’s 30-40 people in our travel party today that couldn’t be happier for him and I’m sure there are thousands of LA Kings fans and hockey fans around the world that are happy for him, because he certainly deserves all the good things that happen to him. I can’t wait to see him get the next 500.”

We’ll touch more on Kopitar later on today, with a full feature on his milestone night.

Beyond number 11 though, Wednesday’s game against Arizona proved to be a productive one all the way down the middle of the lineup. Quinton Byfield collected his first career NHL point, just 48 hours after he thought he got it, before his assist was changed in the box score to an unassisted goal. Gabriel Vilardi scored twice, including the game-winning goal in the second period, his first career two-goal game at the NHL level. Jaret Anderson-Dolan also scored, off a nice wrist shot from the slot, to make it a great night for the centermen of the LA Kings.

Byfield’s point has felt like a long time coming, with the 18-year-old forward seeming older a lot of times he takes the ice. He’s fit in nicely in his five games so far with the Kings, providing a glimpse of the future.

“For Quinton, to get his first one, we all thought that happened last game, we’ve got a stale puck lying around somewhere with Q’s name on it, but to get it tonight, he made a nice backcheck, an effort play, one that isn’t a pretty play but one that was really important because they would have had a pretty good scoring chance,” McLellan said. “He stripped the puck on the way back and triggered the offensive play the other way.”

That glimpse looks even brighter if you think of Byfield and Vilardi together as centers playing with Kopitar. Vilardi has looked like the player we expected out of training camp in recent games, playing with loads of confidence which has allowed his offensive abilities to shine through.

“I think we talked about, 10-12 games ago, he came out, he needed a breather, and since then, he’s been quite an effective player,” McLellan said yesterday. “He came back into the lineup as a fourth liner, got his feet wet again, and I think since then his confidence is back. One thing that I notice from him, that we’ve asked him to do, is he’s shooting the puck. He’s using that as part of his toolkit. I thought, earlier in the year, he really just wanted to be a distributor, and now he’s creating with his shot, not only for him but for other players. Good for him, we’re happy for him.”

When you add in the energetic and responsible Anderson-Dolan to that mix, having three centers aged 22 and younger, not to mention the currently injured, 23-year-old Blake Lizotte, it feels like is some serious potential depth behind Kopitar, from a position that had far more questions than answers entering the season.

Overall, the Kings swept the season series at Gila River Arena, with four victories from four games played in Arizona. They say it’s a 3-2 league, and two of those wins game by a 3-2 margin, with the other two games sitting 3-2 into the final minutes, with an empty-net goal leading to 4-2 finals. 3-2 sure does feel like a fitting score for Kings – Coyotes, with the way that both teams play. For the visitors, the two-game sweep was their first in any building since late-February in St. Louis, which followed the first two-game sweep over Arizona.

After we saw the obvious letdown from the team’s playoff fate coming into clearer focus in Anaheim last weekend, perhaps we saw a looser, nothing to lose version of the Kings this week in Arizona. Monday’s victory started off with one of the best periods of hockey the Kings have played in some time, we saw a much livelier Kings team, playing with energy and offensive purpose over the 120 minutes. By no means was it perfect hockey, but it was certainly encouraging hockey, and in many cases entertaining hockey.

The two wins also mean that the Kings outlasted Arizona, with the Coyotes officially eliminated from playoff contention after the pair of losses. It was a longshot that would cash some series bets for anyone to catch St. Louis entering the week, and with Arizona and San Jose both now out, it’s just the Kings remaining that the Blues need to officially put away, with a magic, or tragic, number of 3, and five games for each team in order to hit it.

Looking ahead, the Kings will play four of their final five games this season against the Colorado Avalanche, two in each building, sandwiched around one final home game against St. Louis. Off of two wins over Arizona, the Kings will get one final test against two playoff teams here to close out the regular season. It all starts at home, with three straight beginning on Friday at STAPLES Center.