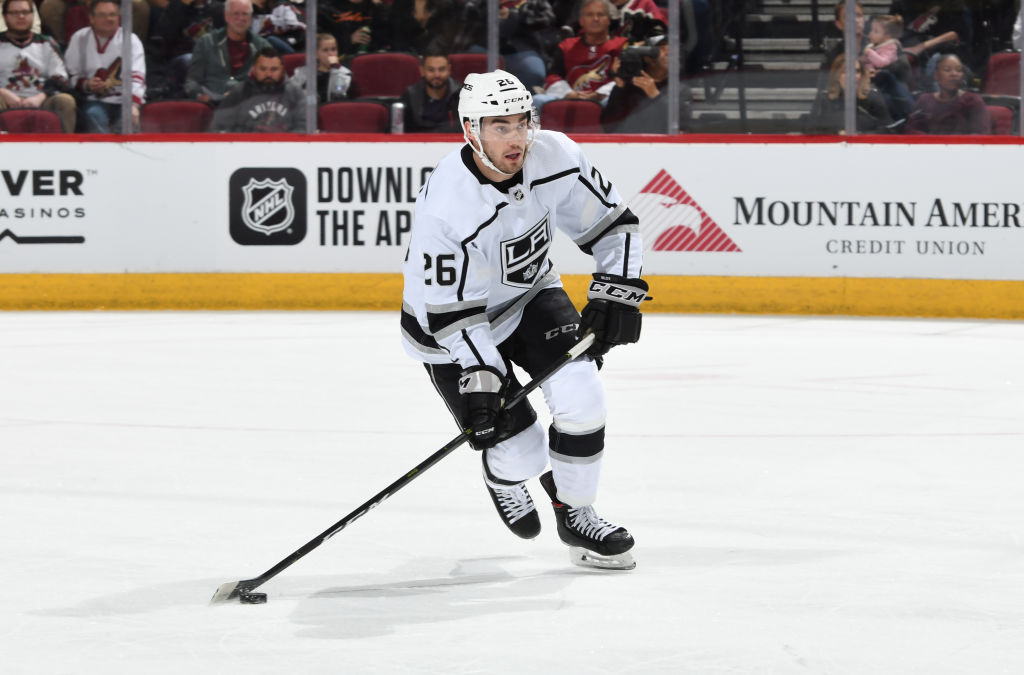 TONIGHT’S MATCHUP: The Kings and Coyotes wrap up their season series this evening in Arizona, with the second half of the back-to-back set between the two teams.

HEAD-TO-HEAD: Entering tonight’s action, the Kings have won 4 of 7 head-to-head meetings to date, and hold a narrow 8-7 points advantage in the season series. Defenseman Drew Doughty tallied an assist on Monday, the 30th of his career against the Coyotes, the most against any NHL opponent. Doughty also leads all Kings skaters with eight points (2-6-8) from seven games played against Arizona this season. With a goal last night, defenseman Jakob Chychrun collected his seventh point (2-5-7) from seven games played this season against the Kings, tied for the second most versus LA this season by a blueliner.

As Todd McLellan said yesterday, Jonathan Quick will not be available tonight for the Kings, which points to Cal Petersen in net. Petersen entered the game in relief on Monday and made 15 saves on 15 shots to help see out Quick’s victory. This season, Petersen is 1-2-0 from four games played versus Arizona, with a .910 save percentage and a 3.05 goals against average. Troy Grosenick is expected to serve as the backup tonight, while Matthew Villalta will be recalled to the taxi squad as the third goalie.

In terms of skaters, with today’s skate being optional, we will wait until closer to game time to know for sure.

Here’s how the forwards lined up on Monday, which was supported by yesterday’s practice –

On defense, the Kings have used the same pairings over the last eight games, with the exception of dressing seven defensemen twice against Anaheim last week. The roles have not shifted much either, with Drew Doughty continuing to lead the backend.

McLellan said that there are no plans for that to change over the last six games either. As long as Doughty is healthy and ready to go, he’ll continue to play his normal role for the Kings.

“He’s a competitive guy and he wants to be on the ice,” McLellan said. “There’s no reason why we shouldn’t – he’s healthy, he loves playing the game, in my mind he still has a lot to play for. He’s had an outstanding season, a really, really good season in my mind, on both sides of the puck. I know that he doesn’t want to give it away in the last 5,6 games here, he wants to be a high-end performer. There’s still eyes on him for that special event that’s going to happen next winter, I think he has a great chance of playing on that team, so he wants to finish the season well and we want to use him the way we’ve always used him.”

After a couple of games with the pairings shuffled, Mikey Anderson was back on Doughty’s left on Monday, playing over 20 minutes for the third straight games, after four games under that mark. At 21:04 per season, Anderson leads all first-year players in time on ice per game, two seconds on average ahead of New York’s K’Andre Miller.

The Bjornfot – Roy and Maatta – Walker pairings have continued steadily as well, in what has been the first consistent stretch amongst personnel on the blueline all season.

COYOTES VITALS: Arizona enters tonight’s game five points behind St. Louis in the West Division standings and would be eliminated from playoff contention tonight with a combination of two points either gained by the Blues or lost themselves.

Goaltender Adin Hill is expected to get the start tonight for Arizona, following Darcy Kuemper’s start on Monday. Hill is 1-1-0 from two starts against the Kings so far this season, with a .912 save percentage and a 3.04 goals against average.

As Anze Kopitar chases point number 1,000 for his NHL career, Arizona forward Phil Kessel is pursuing point number 900. Kessel has 899 points in his NHL career to date, one shy of the milestone. Kessel would become one of six active players between 900 and 999 career points, including Kopitar, and would be one of just two active American-born players with 900 or more points.

Forward Nick Schmaltz is day-to-day with an upper-body injury. Schmaltz was hit with an errant puck during warmups, off a shot that ricocheted off the crossbar, and was a late scratch from Monday’s game. As such, the Coyotes went with 11 forwards and seven defensemen, with Jordan Oesterle checking in. Schmaltz’s status for tonight has not been determined.

O from the D

The Kings have three goals from defensemen over their last five games. It’s not a staggering total, but outside of Drew Doughty, getting that offensive production from the blueline has been a point of emphasis after a slow start in that department.

Three different blueliners have scored those goals, and the unit as a whole is generating more shots, and more opportunities off the rush as of late.

“I think they’ve got into shooting positions much better than they did earlier in the year,” McLellan said. “There’s not as much low-to-high play that just gets dumped back into the corner, they’re prepared to shoot. We’ve seen our d-men use their legs a little bit more, Walker in particular, he’s up in the rush, he’s creating and joining the rush, he’s had a couple of real good scoring chances over the past few nights. Often, when the backend is scoring, there are some forwards going to the net, supplying screens or chaos in front of the net. Perhaps, all that is going, and we certainly need more of it.”

McLellan mentioned Walker specifically as a player who has upped his chance creation, and that’s something that has developed beyond just the last few nights.

“Absolutely, and we talk about his shot, but a lot of his shot is coming of the rush and joining,” McLellan said of Walker. “To me, that’s legs, that’s the willingness to use your legs in certain situations and be available and then the shot comes. An aggressive mindset, but not to the point when you’re causing any issues coming back the other way. He’s done a good job of that lately.”

Hear from Walker this morning, talking about his increased role in joining the rush, a shooting mentality amongst the defensemen and more.

Forward Andreas Athanasiou has provided a nice blend of speed and skill to the Kings lineup so far this season.

After signing on a one-year contract early in training camp, Athanasiou is one of six Kings players with double-digit goals this season, and his 22 points from 42 games played ranks sixth amongst Kings forwards, with his .52 points-per-game ranking fifth.

Athanasiou has enjoyed his time with the organization and is hopeful to remain past the final six games of this season.

“There’s always talks throughout the year,” Athanasiou said this morning. “Obviously I’m on a one-year [contract], so I’ve got to re-sign this year, it’s pretty straight forward. There’s talks and they seem to be going pretty good. I’m looking forward to being an LA King hopefully next year and hopefully for a long time. It’s been all pretty positive and it’s just a part of the business the way it goes. If you play your hockey, the off-ice stuff will take care of itself.”

The 26-year-old forward is coming off of two and one-year contracts with the Detroit Red Wings, before he signed with the Kings this offseason. He’s seemed to find a nice fit thus far with the Kings, a team that entered the season short on the things he brought.

He added that he’s loved living in Southern California throughout his time with the team, despite being here in a season that makes it tough to enjoy what’s around you.

Looking ahead through the end of the season, Athanasiou isn’t necessarily focued on any particular individual accomplishments, but just playing good hockey over the finl six games.

“I think just playing good hockey is the main thing. I don’t really think about it too much, just each game, take it one-by-one, play hard and try to win games for the team. Just keep building as a team and as a group.”

By Zach Dooley
1,175 Comments
Behind the Scenes

By Zach Dooley
1,051 Comments
Behind the Scenes