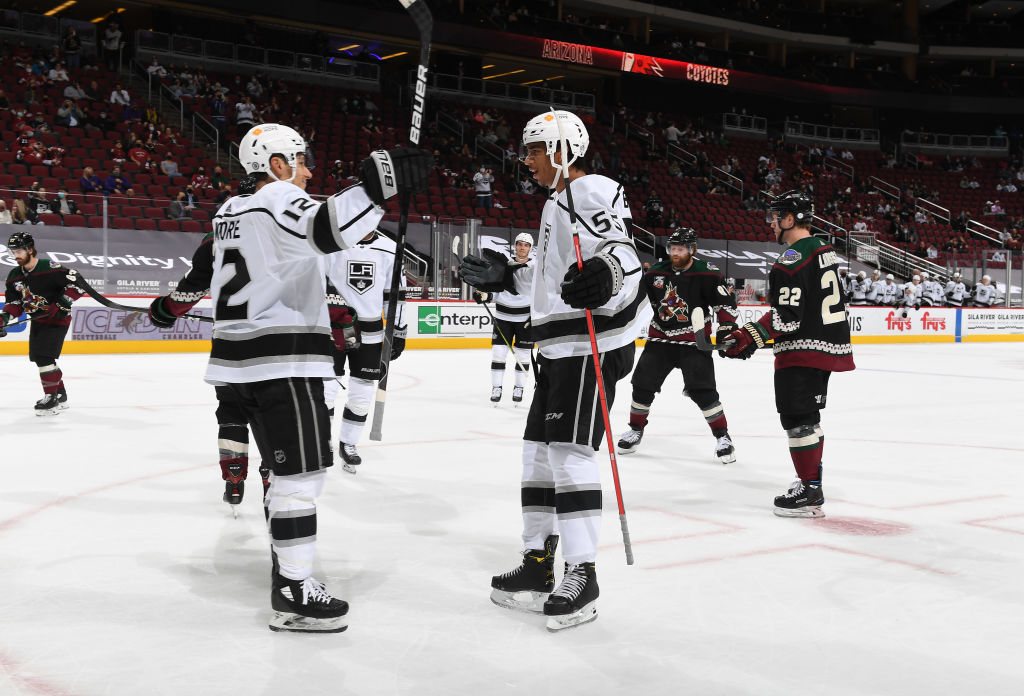 The Kings were back on the ice this afternoon in Arizona for a full team practice at Gila River Arena.

Here’s how the team lined up this morning, by jersey color –

From the net out, we start with Jonathan Quick, who left last night’s game with an upper-body injury after the second period. Quick made 17 saves on 19 shots and earned the victory after Cal Petersen entered in relief and stopped all 15 shots he faced in the third in the 3-2 win.

Quick did not practice with the team today in Glendale, and per Todd McLellan won’t dress tomorrow evening against the Coyotes. Quick is “a little sore” and being evaluated, and he is considered to be day-to-day at this juncture. With that in mind, expect to see Petersen get the nod tomorrow to start in the season finale against Arizona, with Troy Grosenick as the backup and Matthew Villalta as the third goaltender.

Regarding moving forward, McLellan said that Quick is capable of playing over the remaining five games, he’ll be pushing the staff to put him in net. At this stage though, any judgments are premature.

“I would say that if Jonathan Quick is capable of playing, he’s going to be knocking on my door saying ‘I’m capable of playing,'” McLellan said. “That’s the type of character he is. I don’t want to be the guy who tells him he’s shut down either. If health permits, I’m sure we’ll see him again and if it doesn’t then so be it.”

On the backend, the Kings rolled with the eight rostered defensemen today, as per usual. The number is down from nine, after Kale Clague was assigned to the AHL’s Ontario Reign over the weekend. Clague has had an even split between the Kings and Reign this season, with 18 games played at each level, and barring a change here at the NHL level, appears to be in a place to get some game action with Ontario. In his third pro season, Clague has worn an “A” at times with the Reign, assuming more of a leadership role amongst his younger peers on the blueline.

Up front, the Kings made some changes last night, with Adrian Kempe earning a bump to the top forward line, as he played “one of his strongest games of the season” in the words of his head coach. Kempe created a goal with his speed, with the primary assist on Anze Kopitar’s tally, and nearly got one for himself, as he rang the post from the left-hand circle in the third period. Kempe was engaged and effective in that role and took some of the burden off of Kopitar in terms of carrying and transitioning the puck.

“Juice certainly last night was skating, he transported the puck well,” McLellan said of Kempe. “You can see a lot of the work and the planning that goes into the power play, because Kempe is such a great skater, a lot of times, he’s the transporter of the puck. It certainly is something worth monitoring and considering, good eye for that.”

Alex Iafallo went the other way, as he featured on the left with Gabriel Vilardi and Lias Andersson on an effective third line. That line was right around the 50/50 mark in terms of shot attempts but were +2 in both scoring chances and high-danger looks. Vilardi and Iafallo especially were very good along the boards and below the goal line and seemed to form a good-looking unit along with Andersson, despite not playing many minutes together before Monday. Good signs both ways.

Regarding the forwards as a whole, today’s alignment did not suggest any changes heading into tomorrow, but we wait and see until then.

It’s been an encouraging four-game sample for Quinton Byfield, after his debut against Anaheim six days ago. Byfield has played four games in six days since, without missing one so far for the Kings, centering the team’s second line throughout that span.

Byfield collected his first career NHL point last night……for about 20 minutes until the goal was changed to unassisted. Assist or no assist though, McLellan has liked what he’s seen from his youngest player in a short sample size so far.

“There’s been a lot of areas that we’ve been impressed with, his ability to keep up with the pace of play for one,” McLellan said of Byfield, earlier today. “Faceoff circle has been up and down a little bit, I think he’s made some really poised plays with the puck. He’s come out of corners with it, he’s been able to escape some of the containment, he absorbs things really quick, he’s an inquisitive player. He asks some very valuable questions and he puts them into play right away, he’s not confused by direction. Those are all real positive signs for us.”

The big outstanding question centers not around how Byfield has played, but how he will be deployed over the next few games. Byfield centered a line last night with Trevor Moore and Andreas Athanasiou, with Moore scoring off a Byfield faceoff win last night. With Blake Lizotte currently out with an upper-body injury, the Kings are shorthanded on centers in the interim, and it will be interesting to see how Byfield is deployed moving forward.

Regardless of that lens, though, the Ontario native has fit in well with the Kings thus far in his short time with the team. Moore remarked, as you’ll see below, that it’s hard to remember that Byfield just 18 sometimes. McLellan echoed those statements as well.

“He fits the team very well, he’s 18 going on 25 with the rest of the group, he’s not a young boy in that group, he just fits, and that’s really important as well,” McLellan said. “It’s been a real good four games for him, he’s experienced some highs and lows. Been in some good games, and obviously the one in Anaheim, where there wasn’t a lot of emotion on our bench, it was a real good early learning experience for him, but it’s not over and it’s going to keep on going.”

We Want Some Moore

Trevor Moore collected the first Kings goal yesterday, his tenth of the season, as he became the sixth Kings forward this season to reach double digits in goals. For a player who entered this season with eight career NHL goals to his name, from 67 games played, Moore has had a particularly impressive season, working his way from the fourth line on opening night to a larger, and higher, role in the lineup.

Moore is a staple on the penalty kill, ranking third amongst Kings forwards in shorthanded time on ice, and has skated in the team’s middle six for some time now.

The California-born winger spoke with the media this afternoon on his desire to take on and continued that increased role with the Kings this season, his increased production, the play of his current centerman – Byfield and Anze Kopitar approaching the 1,000-point mark.

We won’t dive into this too deeply today, Insiders, as plenty will come once he officially reaches the mark. However, Anze Kopitar tallied the 998th and 999th points of his NHL career last night, and we’re officially on #KopiWatch tomorrow against the Coyotes.

Kopitar’s next point will be the 1000th of his NHL career, which would make him the 91st player in NHL history to reach the milestone. An impressive achievement, even if Kopitar provided no value defensively. When you consider that he is a two-time Selke Trophy winner, and a yearly contender for the NHL’s best two-way forward, it’s that much more impressive.

As we approach history, Kopitar would become the fourth player to reach 1,000 points in a Kings sweater, joining legends Marcel Dionne, Luc Robitaille and Dave Taylor. As we approach the end of the season, with just six games remaining, Kopitar’s quest to join elusive company is an exciting story to follow.

The Kings are scheduled for a morning skate tomorrow, in advance of the season finale against the Coyotes.