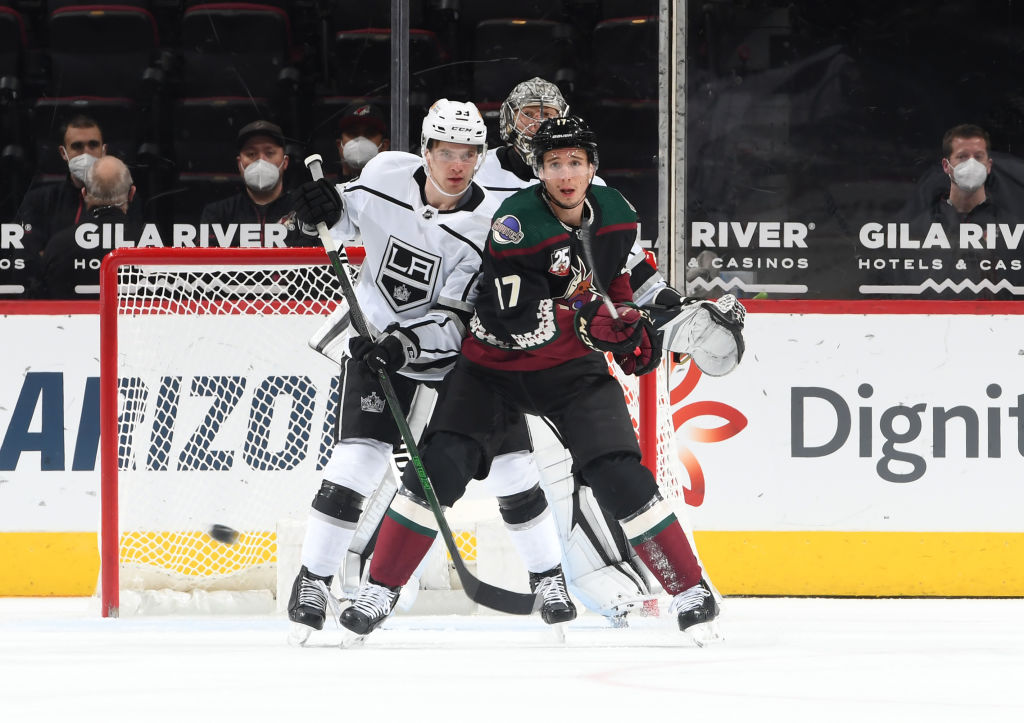 TONIGHT’S MATCHUP: The Kings are in Arizona for their second-to-last road trip of the season, and the final games played against the Coyotes.

HEAD-TO-HEAD: Defenseman Drew Doughty leads all Kings skaters with seven points (2-5-7) from six games played against Arizona this season. In his career, Doughty’s 41 points versus the Coyotes are his most against any team, with his 12 goals and 29 assists also tied for career highs. Forward Gabriel Vilardi scored the game-winning goal in both games played here in Arizona this season, one in regulation, one in the shootout. The home side is led by forward Phil Kessel (3-3-6) and defenseman Jakob Chychrun (1-5-6) with six points apiece from six games played.

KINGS VITALS: The Kings held a full-team skate this morning at Gila River Arena, following a travel day yesterday on which the team did not skate.

The Kings will be shuffling around their forward lines this evening, with Adrian Kempe slotting in alongside Anze Kopitar and Dustin Brown on the top line, per Todd McLellan this morning. Alex Iafallo will skate on a different line, as he was among the players in white jerseys today. Additionally, Carl Grundstrom will check back in tonight, with Austin Wagner sitting out, which was the only personnel change disclosed from this morning.

Here’s how the forwards lined up during morning skate –

It wasn’t disclosed exactly who Iafallo would line up with tonight, but McLellan was hopeful that perhaps just switching something up for him, and for Kempe, might help both players to create more offensively here.

“Alex has gone eight or nine games now without being productive offensively – doesn’t mean he hasn’t created chances or been involved in the play, he certainly does enough away from the puck to warrant his ice time – but maybe a look with a different centerman, or something to freshen things up, may get him back creating offensively,” McLellan said this morning. “It might also give [Kempe] a chance to create offensively with Kopi and Brownie. It’s something we haven’t tried, we might as well see what it looks like tonight, and we can make a decision going forward.”

As McLellan noted, Iafallo hasn’t tallied a point in eight straight games, though he’s been a +15 in terms of Corsi and +4 in both scoring chances and high-danger chances created in that span. You expect your top-line players to produce though, and hopefully switching some things up can benefit both Iafallo and Kempe, as well as the players around them.

In terms of distribution of ice time, all four centers played between 13:37 and 14:57 in total time on ice on Saturday, the most even TOI we’ve seen between four lines this season. That’s not necessarily something that was planned though, or done strategically, but how Saturday’s game played out. How it shakes out moving forward will play out game-by-game.

“Saturday’s game presented itself where it was going to be equal, we didn’t have a line that was going real well,” McLellan said. “Normally, if we have a line that’s dominating, or playing really well, they tend to get more minutes. There wasn’t a lot of power-play or penalty-kill time in the game so that often gives certain players a chance to maximize the minutes, or minimize for others. As we go forward, we want to see everybody play and want to see everybody play well, so it’s hard for the coaching staff to decide who should be out there. The other night, we had very few players play well, so we had to put somebody on the ice and we just balanced it out.”

Nothing from today points to any changes being made o the backend, while the rotation would turn to Jonathan Quick in net, though unconfirmed. If Quick does go, he’s won four of his last five starts and brings a 2-1-0 record, a .889 save percentage and a 2.61 goals against average against Arizona this season.

COYOTES VITALS: Arizona enters tonight’s action with a glimmer of hope at the postseason, sitting three points out, but with three less games left to play than St. Louis.

The Coyotes are expected to roll with goaltender Darcy Kuemper tonight, who could face his former team for the fourth time this season. From three games played against the Kings in 2021, Kuemper is just 1-1-1, but has posted stellar splits, with a .935 save percentage and a 1.64 goals against average.

Here’s how Arizona lined up last time out, in a 3-2 overtime loss to Vegas on Saturday –

This lineup could change though, with forward Conor Garland a game-time decision to check back in for the hosts. Garland has been out of the lineup with a lower-body injury since April 19 and has four points (1-3-4) from five games played against the Kings this season. Despite missing seven games, Garland ranks fourth on the Coyotes in total scoring on the season, with 32 points (10-22-32) from 45 games played.

Defenseman Tobias Bjornfot is the youngest member of the LA Kings backend, but as he grows and develops throughout his first full season in the NHL, the term young becomes relative.

“In my mind, the word young is an age-orientated word for [Bjornfot and Mikey Anderson], because now, they’ve experienced the league to be out of, for lack of a better term, diapers,” Todd McLellan said this morning. “They’ve graduated up to, not a veteran-type defenseman, but certainly an experienced couple of players. They’ve gone through enough games to understand, at least the eight teams we play against, how they play, what it’s going to feel like.”

Now, as he approaches his 27th game of the season tonight, Bjornfot continues to earn his role on the backend at just 20 years of age. Bjornfot has shown tremendous growth from where he started last October, as he lined up against Connor McDavid and the Edmonton Oilers for his NHL debut as an 18-year-old player.

Fast forward through a season in the American Hockey League, where he skated on the top pairing for the Ontario Reign, and passed with flying colors, to now. He didn’t enter this season in the lineup but earned his spot and hasn’t let it go. McLellan has seen several areas of improvement from Bjornfot as he’s progressed through the season.

“I think he’s physically stronger than he was last year at this time, he’s able to read and react a lot quicker, he’s got way more confidence,” McLellan added. “The players believe in him a lot, and he just fits, he looks like he belongs now, whereas maybe in the past, he was just trying to survive.”

As Bjornfot has progressed, so has his confidence, and with that comes more self-belief in certain areas of his game. Roy feels that Bjornfot isn’t afraid to make a mistake, and has grown as a two-way defenseman, joining the play offensively more frequently.

“I think his confidence has improved a lot and I feel like he’s jumping in a lot more offensively,” Roy said of Bjornfot this morning. “He’s not afraid to make a mistake out there and I think in those regards, he’s made his best improvements.”

On that offensive front, The Upplands Vasby, Sweden native scored his first career NHL goal on Saturday in Anaheim. There is a belief that there is more offense in his game as he continues to grow in confidence and development, which can only come with time. Certainly one of the more interesting players to focus on here down the stretch, as one of several in the lineup pushing for a larger role moving forward.

I asked the now second-year blueliner about not only Bjornfot, but what he’s looking for from the team tonight in terms of a response after a disappointing set of games in Anaheim over the weekend, as well as about the increased, overall, offensive production from the blueline as of late, something that McLellan also touched on earlier today.

Kings and Coyotes, coming up tonight at 7 PM!

By Zach Dooley
282 Comments
Behind the Scenes