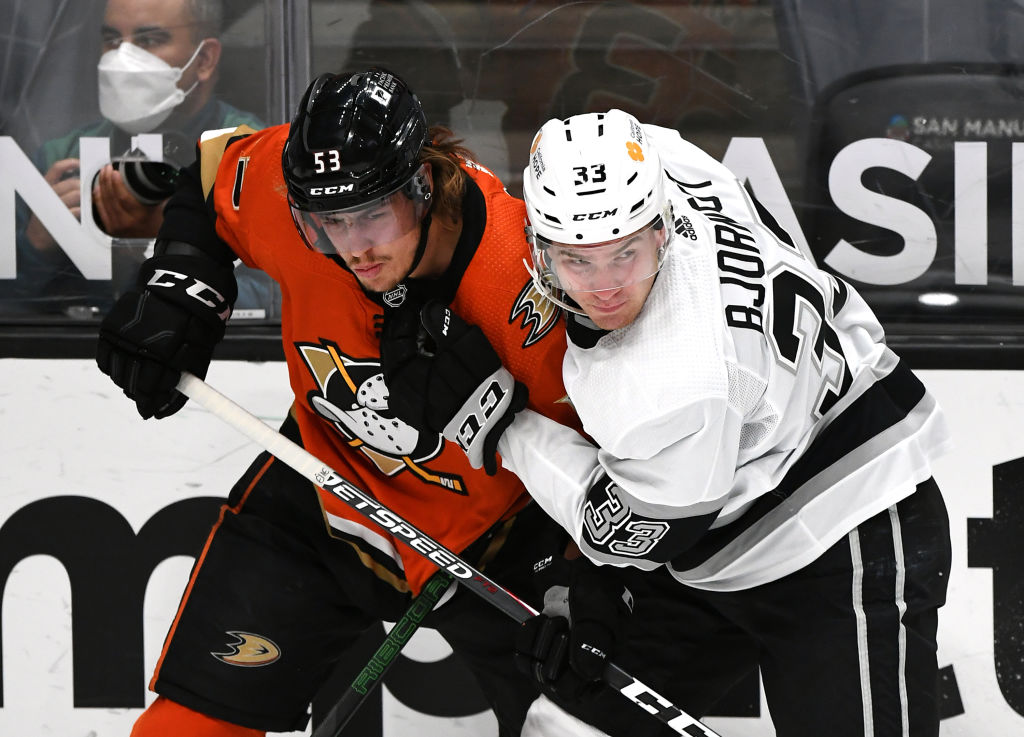 TONIGHT’S MATCHUP: The Kings and Ducks square off this evening for the final time this season, with the eighth edition of the 2021 Freeway Faceoff.

HEAD-TO-HEAD: Forward Adrian Kempe (6-2-8) leads all skaters this season with eight points from seven games played against Anaheim. With the game-winning goal last night, forward Anze Kopitar scored for the 27th time in his NHL career versus the Ducks, his most against any one opponent. Forward Trevor Moore, with an assist last night, now has a point from five of the last six head-to-head matchups versus Anaheim, including all three this week. On the Anaheim side, forward Rickard Rakell continues to lead all skaters with five points (2-3-5) from seven games played against the Kings.

KINGS VITALS: The Kings did not skate this morning, considering the back-to-back set this weekend.

Typically, the Kings would split goaltenders in back-to-back sets, going that route all but once this season. That would point to Cal Petersen in net tonight, who brings a 1-2-1 record, a .895 save percentage and a 2.98 goals against average against the Ducks this season into tonight’s action. Jonathan Quick was excellent in net yesterday, with 33 saves in the 2-1 win over Anaheim, improving his own mark to 2-0-0 versus the Ducks this season.

Without a morning skate today, this evening’s lineup is anything but clear. Over the last week, the Kings have dressed both 11 and 12 forwards, and 6 and 7 defensemen. Here’s how the Kings started yesterday –

The key word for the blueline though is started, as McLellan didn’t stick hard and true to those pairings. Drew Doughty’s most common partner last night was Mikey Anderson (9:43 together at 5-on-5), not Tobias Bjornfot (5:25). Bjornfot played with both Doughty and Matt Roy, while the Maatta – Walker combination was relatively unaffected. It wouldn’t be surprising to see Anderson and Doughty reunited tonight to start the game, as Anderson logged more than 23 minutes yesterday, after dipping below the 20-minute mark in the four games prior.

In terms of the forwards, we’ll need to wait and see. We’ll dive a bit deeper into the play of Lias Andersson below, but his line was the most impactful for the Kings last night, expect him to keep his spot. The biggest question mark is likely how Quinton Byfield’s games will be managed down the stretch. Byfield is expected to play no more than six total games here with the big club, and two are now behind him. With eight games left on the calendar, it will be interesting to see how exactly he is deployed night-to-night.

Miller, who announced yesterday that he will retire at the end of the 2020-21 season, has yet to appear against the Kings so far this season, with Gibson taking five starts, and Anthony Stolarz starting twice. In his NHL career, Miller is 11-6-4, with a .933 save percentage and a 2.32 goals against average versus LA. Tonight is Anaheim’s final home game of the season, and likely Miller’s final game at Honda Center.

“It was a dream come true when I played my first NHL game and it has been a privilege to spend 18 years as a professional,” Miller said earlier this week. “I have decided that I am going to retire after the season having been given more time doing what I love than I could ever have hoped for. Thank you to you my teammates and staff, past and present. I’m thankful to so many who made my career possible and helped me on my journey from youth hockey to the NHL. Thank you to my family for supporting me with so much love and enthusiasm.”

The graphic below shows how the Ducks lined up last night, though Head Coach Dallas Eakins has already said that forward and captain Ryan Getzlaf is expected to play tonight, after he was given the night off yesterday –

Heinen back in as The Captain takes a rest day. #FlyTogether | @7UP pic.twitter.com/bS6q6Zxty2

Adam Henrique (COVID Protocol) and Josh Manson (upper-body) are not expected to return to the lineup tonight.

Plenty To Play For

Todd McLellan was very clear last night that there is plenty for the LA Kings to play for down the stretch.

“As I told the players in between the second and third, we have a management team, a coaching staff and even players are evaluating each other right now. It does matter at this time of the year, because decisions will be made based on the season as a whole, but also what you do in these moments. Some are pushing for more and others are giving it away.”

McLellan gave that statement when asked about the play of Lias Andersson, a player who has earned an opportunity to play regularly, after a season that has seen him move countless times between the active roster, taxi squad and AHL. Through two games, Andersson has made the most of it. He was noticeable offensively on Wednesday at STAPLES Center and played well again last night, skating on the left wing on the team’s third line both evenings.

Andersson is a +8 in Corsi over the two games, +5 in scoring chances and +4 in high-danger chances for. All the fancy stats were good, and he made them count by burying a terrific assist from Gabriel Vilardi to tie the game late last night. It clearly meant something to Andersson to get that goal for his team, after working his way back to the NHL.

“Yeah, it means a lot,” he said after yesterday’s game. “We didn’t play our best today, and I wanted to get us on the board so badly. I was just happy after the goal and it feels better to score when the team hasn’t played very well and you can tie it up in the end. Huge goal for the team and I’m very happy and excited for that.”

It’s the Smogen, Sweden native’s first opportunity to play above the fourth line since he had a run on the third unit in February, and he’s made the most of it so far. McLellan made clear that some players, like Andersson, are pushing for a larger opportunity both this season and moving forward.

“Lias right now, he’s produced for two games, he’s played two really good games, so he’s trying to show us that he belongs here, so good for him.”

Dooley's Diary is BACK 🏒

McLellan also noted, multiple times yesterday, that he was disappointed in the play of some others, at least in the first two periods. He stressed that it’s not just young players who are evaluated, it’s everyone on the ice. He pointed to intangibles, and character traits, that are important at this time of the season.

“The intangibles come into play right now,” McLellan said. “Are you willing to get into a lane and block a shot now, are you willing to take a hit to get the puck out, can you shorten your shift up so your teammates have a better chance at success, are you willing to come back as hard as you go in…I could go on and on and on. A lot of it is the intangibles, the character stuff that we’re looking at. If you lack it, or you give it back, it’s going to show up quickly.”

The evaluation process continues tonight and will remain ongoing through the end of the regular season.

Tonight is just the third LA Kings regular-season game played all-time in the month of May. The Kings enter tonight’s game at 1-1, with a victory over Winnipeg, and a loss to Chicago in May of 1995.

Former Kings defenseman and current Kings General Manager Rob Blake is the only player in franchise history with multiple regular-season points this month with two, as he scored one of the team’s three May goals in 1995, and assisted on another.

With the all-time leader in franchise history in May regular-season scoring on the line, the Kings and Ducks square off tonight at 7 PM.

By Zach Dooley
6 Comments
Behind the Scenes