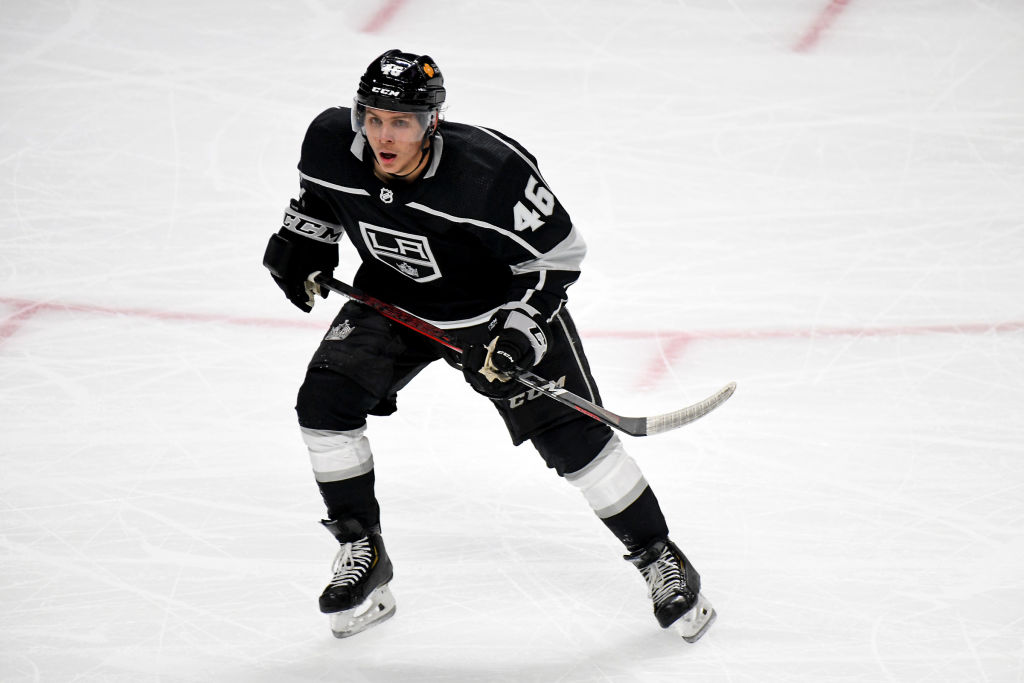 The Kings returned to the ice this morning for a short skate at Toyota Sports Performance Center, in between last night’s Freeway Faceoff at home, and tomorrow’s edition in Anaheim.

Here’s how the Kings lined up this morning, by jersey color –

A Few Notes On This Alignment:

– Todd McLellan confirmed this morning that Quinton Byfield will remain in the lineup tomorrow. Byfield, Adrian Kempe and Trevor Moore formed an effective line in Byfield’s NHL debut last night, with Byfield logging nearly 18 minutes in total and more than four minutes on the PP.

“We paid close attention to his game, and there was a lot of confident, poised plays that he made,” McLellan said of reviewing Byfield’s game from yesterday. “I think about him stepping onto the ice for his first shift, he didn’t even get to take a stride and he had to make a real quick puck decision, put it on somebody’s tape and up it went. Competed well in the faceoff circle, put himself in the position to score numerous times, I thought he got better as the night went on. We felt good about playing him on the power play, the concepts that they worked on at the American League level showed up for him, I think he even penalty killed a little bit. A pretty complete night for a really young man, and hopefully we can grow that as we move forward.”

– Also entering the lineup yesterday was Lias Andersson, who skated on the third line with Blake Lizotte and Andreas Athanasiou. Andersson played an extended run of games in the first half of the season, as he skated in 11 of 12 between January 19 and February 16, but has appeared in just three since with the big club.

“He’s been patient with us as an organization,” McLellan said this morning, of Andersson. “He’s been in and out, he’s played a very good game at the American League level for a number of nights, and now he’s getting his opportunity to stay in the lineup and solidify a position there. I thought he was dangerous offensively, he created chances. He had a couple close plays in and around the net, where he seems to find himself a lot offensively. Defensively, he’s improving, but again, we think he’s a long-term prospect for us and he’s improved throughout the year.”

Andersson is a point-per-game player in the AHL with the Ontario Reign, with 14 points (5-9-14) from 14 games played, and he leads that league with three shorthanded tallies. With Ontario, Andersson typically plays on the first line and plays in all situations. His role is different with the Kings, and his 12:37 last night was just the third time this season he’s played more than 12 minutes in an NHL game this season. It’s a look he’s earned, and Andersson is just trying his best to improve and earn more of his Reign role in a Kings jersey.

“I just try to play as good as I can every night,” Andersson said. “Of course I want to get my minutes up and hopefully one day with the Kings get that same role that I had down in Ontario. Working hard every day for it, feel that I’m taking steps every day and getting better. Just going to earn my ice time, happy to be here, stay here. I don’t want to go back down, so I’m just trying to earn ice time and earn my spot here.”

– The outlying question mark from today is forward Blake Lizotte, who did not skate this morning. McLellan said that Lizotte has an upper-body injury, which kept him out of practice today and likely makes him unavailable for the weekend.

Forwards Jaret Anderson-Dolan and Austin Wagner stepped into the grouping of forwards in white jerseys, which indicates that both are options to re-enter the lineup tomorrow at Honda Center, if in fact Lizotte is not able to go. The Kings dressed just 11 forwards yesterday and one or both players could be an option to enter in regardless of Lizotte’s status, with McLellan not committing to the 11 forward look again tomorrow.

McLellan clarified today that neither player was taken out of the lineup due to performance, but rather to make opportunities for Byfield and Andersson to get a look. It was something that he referenced the other day, saying that players would see games off due to opportunities for others, not for

“I talked to JAD and Wagner, because they’re the two players that came out from the prior game. I had mentioned to them that, if they were playing really poor, I would have talked to them, and discussed it with them, but that wasn’t the case. It was about getting a couple of other players – think Byfield, Lias Andersson – an opportunity to get some playing time. Sometimes, you’re just a victim of numbers.”

The American Hockey League announced earlier today that the league’s Pacific Division will participate in a “postseason tournament” to determine the division’s champion. That format will be released at a later date, but the Reign will be a part of it, with an opportunity to win the division, despite their current spot in the standings.

The Pacific Division will be playing for the John D. Chick Trophy, while all other divisions will award their title based solely on regular-season performance.

The AHL also announced that the 2021-22 schedule will begin on October 15, 2021 and conclude April 24, 2022. Division alignments and schedule information will be announced during the offseason. The Reign will be back to playing games at Toyota Arena in Ontario next season, in front of fans, after playing this season at Toyota Sports Performance Center in El Segundo.

Ontario defeated the Colorado Eagles yesterday evening in Loveland, CO, by a 3-2 final, with Rasmus Kupari tallying the game-winning goal with a third-period breakaway. Since starting the season with one victory from their first 13 games played, Ontario is 10-8-2 since, with a much more consistency shown.

What Can Brown Do For You?

In her new role, Brown’s responsibilities include leading the LAJK / Lions Advisory Board in conjunction with the Kings and the Toyota Sports Performance Center executive teams and acting as the primary liaison/representative for LAJK / LAL parents.

Hear from Nicole on her new role, her background in hockey and the importance of these programs to the growth of hockey in our area, as well as Kings winger Dustin Brown on his excitement level for his wife’s new opportunity. The video was shown last night on the LA Kings Live show.

Coming up later on today – An look at the differences in scouting and evaluation of draft-eligible players during this pandemic season, featuring an exclusive interview with Kings Director of Amateur Scouting Mark Yannetti.

By Zach Dooley
435 Comments
Behind the Scenes