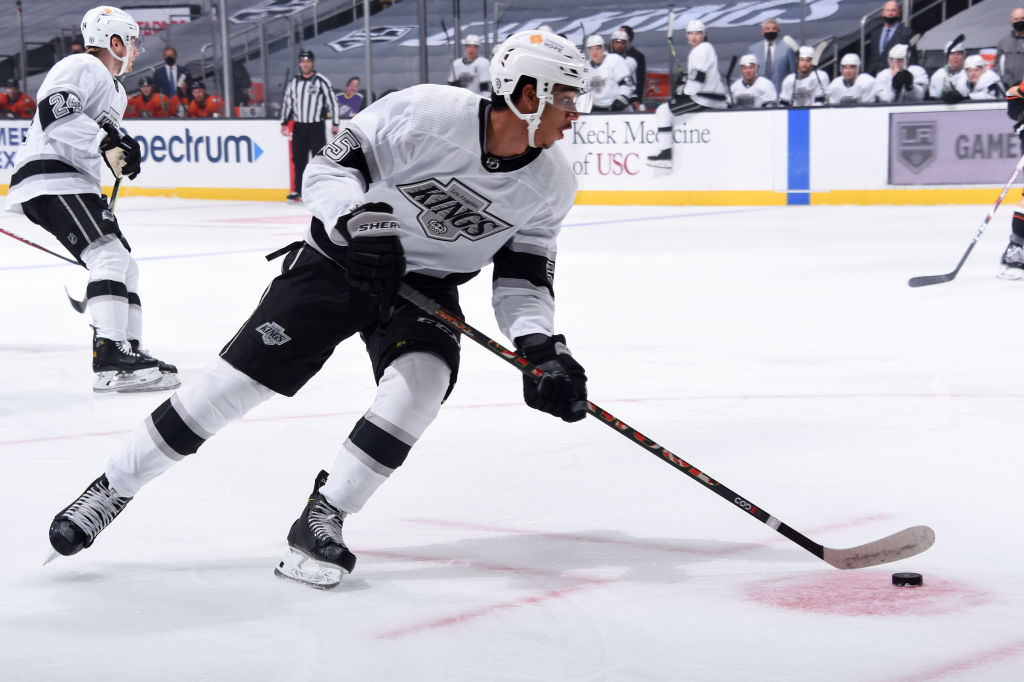 The LA Kings were unable to close out a 2-0 lead, as the Anaheim Ducks scored three unanswered goals to take a 3-2 victory in the final meeting between the two teams at STAPLES Center this season.

The teams skated to a 0-0 opening period tonight, with shots even at nine apiece. The best two chances in the opening frame fell to Lias Andersson, created by Andreas Athanasou, but Anaheim netminder John Gibson was equal with a pad save on both occasions at both ends of the first 20 minutes.

The second period featured four total goals, two by each team. First, the Kings scored on both special teams to take a 2-0 lead. Gabriel Vilardi snapped his scoreless streak with a rebound goal, created by an Adrian Kempe one-timer, to open the scoring. Kempe then got one of his own while shorthanded, capitalizing on an error between Cam Fowler and John Gibson and burying into the empty net for the goal.

Anaheim struck back, however, to tie the game at two heading into the second intermission. Sam Carrick opened the scoring for the visitors, as he drove the net down the left wing and beat Cal Petersen on the backhand. Towards the end of the middle stanza, forward Sam Steel found himself uncovered between the circles and beat Petersen on the blocker side to tie the game through 40 minutes.

After the teams skated deadlocked for nearly 19 minutes, Fowler broke the tie with just 61 seconds remaining in regulation, as he danced around two Kings in the offensive end, before he put a wrist shot underneath Petersen’s glove hand for the game-winning goal.

The Kings left opportunities on the ice on a power play that did score once, but had more cons than pros tonight, as McLellan details below. Between those, and lapses at the defensive end on at least two of the Anaheim goals, the Kings will likely rue missed chances from the entire 200 feet from tonight’s defeat.

On the pros/cons of getting a PPG, but also missing other opportunities
Well, there were a lot more cons than pros, I’ll tell you that. It should be a chance for us to drive a dagger into the other team and get hungry, put the game out of reach and it’s not that right now. It starts from behind our own net, breaking out, guys aren’t alert, they’re not sharp for the puck. We very rarely attack North-South right now in the offensive zone, we want to go East-West, through everything. Sometimes the puck gets through and we just start all over again. Yeah, we got a goal tonight, it was the most direct our power play has been in a while, but the rest of it didn’t meet NHL standards.

On Quinton Byfield’s debut, how he settled in, and if he got stronger as he went
I thought he started strong. The first time he stepped onto the ice, the first time he hit the ice, the puck came right to him and he made a real nice play. I’m sure that made him feel comfortable, I thought he contributed to a lot of offensive chances. He was good in the circle, he had a pretty good idea and understanding of the structure and how we wanted to play. Overall, definitely a passing grade for him, he was probably one of our better players. We had some guys that we certainly count on, night in and night out, that didn’t have very good nights tonight, so that’s something they need to fix.

On not easing Byfield in and if that was the thought going in
He earned the opportunity as the game went on, as I said he was one of the better players. If we didn’t trust him, and we didn’t feel good putting him on the ice, we wouldn’t have. I think his minutes, and the opportunity he got reflects his play, and hopefully we can grow on that.

On if he felt the game tilted towards Anaheim after the shorthanded goal
Obviously the game went their way after that, but I didn’t think the rink was tilted one way or the other. It wasn’t a great game, at least from our perspective, we didn’t play the way we wanted to play, and the execution…when you’re not sharp, and you’re not executing properly, it’s going to be one ugly game and it was that for us. I don’t know about their team, but certainly for us it was that.

Notes –
– Forward Adrian Kempe collected his sixth multi-point game of the season, and his 14th goal, in tonight’s game. Kempe is now two goals shy of his career high (16, 2017-18).
– Kempe scored the team’s third shorthanded goal of the season, their first since April 3, and their first by a player other than Trevor Moore.
– With his game-opening goal, forward Gabriel Vilardi snapped a 26-game goalless streak with his seventh tally of the season.
– Moore collected a point for the second consecutive game with the primary assist on Vilardi’s goal. The California native has seven points (4-3-7) over his last ten games.
– Forward Quinton Byfield made his NHL debut tonight, and logged 17:57 in total ice time, including 4:20 on the man advantage.
– The Kings played a first period without a goal for either team for just the eighth time from 47 games played this season.

The Kings are scheduled to return to the ice tomorrow morning for an 11 AM practice at Toyota Sports Performance Center.