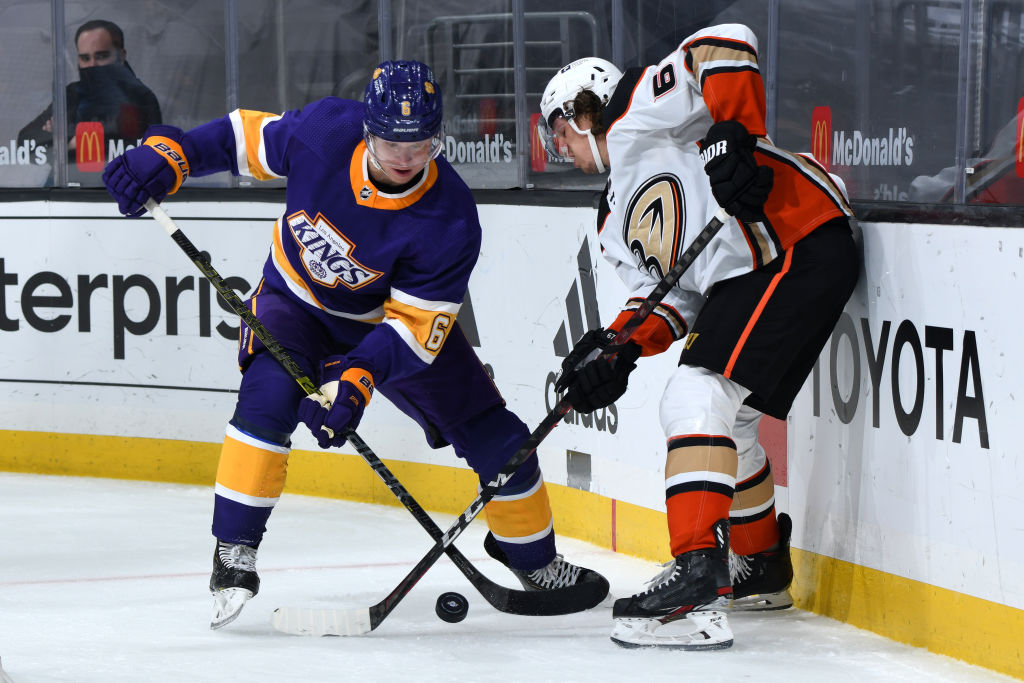 TONIGHT’S MATCHUP: The Kings hit the ice this evening to host the Anaheim Ducks in the first of four games between the rivals over the next six days.

HEAD-TO-HEAD: A quartet of LA Kings players currently lead the team with five points from four games against the Ducks this season – Adrian Kempe (5-0-5), Andreas Athanasiou (3-2-5), Blake Lizotte (1-4-5) and Drew Doughty (0-5-5). Both Athanasiou (10 points from 11 games) and Lizotte (5 from 6) have as many or more points against the Ducks than any other team in their NHL careers. Forwards Rickard Rakell (2-2-4) and Max Comtois (0-4-4) lead the visitors with four points each from four games played against the Kings this season.

KINGS VITALS: The Kings were back on the ice for a full-team skate this morning, in advance of tonight’s game versus Anaheim.

Here’s how the group looked this morning –

In terms of tonight’s lineup, Todd McLellan confirmed that Jonathan Quick will get the start, after the Kings opted to go with Cal Petersen between the pipes in all three games played last week, including the back-to-back on Friday and Saturday. The veteran has not faced the Ducks this season, but is 22-13-8 with a.908 save percentage and a 2.46 goals against average in his NHL career against Anaheim.

The Kings shook up their lines midway through the game on Saturday, but this morning’s alignment doesn’t appear to set up how the game ended, or how it started. Going with 11 forwards and 7 defenseman feels like an option, with how the forwards look above, but at the same time, we’ve seen similar looks in morning skate that haven’t meant seven defensemen either.

This morning would point towards Brendan Lemieux making his return to the lineup, after sitting out on Saturday, potentially in place of either Carl Grundstrom or Matt Luff. Kale Clague, Kurtis MacDermid and Christian Wolanin are options on the backend on the active roster.

DUCKS VITALS: The Ducks were back on the ice this morning, following Saturday’s defeat against Vegas.

Usual starting goaltender John Gibson played on Saturday, though it was Anthony Stolarz who had the net on Tuesday at STAPLES Center. No word yet on the Ducks skate from this morning, but if Gibson goes, he brings a 2-0-1 mark this season, and a 12-6-0 record in his regular-season career against the Kings.

Forward Ryan Getzlaf left Saturday’s game with an upper-body injury and did not return, though word on his status yesterday was that he is probable to play tonight. Forward Isac Lundestrom and defenseman Josh Manson, both absent on Saturday, are day-to-day. Forward Jakob Silfverberg, one of the Ducks’ top goalscorers, is out for the season after he had surgery to repair a torn labrum.

As frustrating as the weekend was for the Kings, it’s now in the past. McLellan acknowledged that frustration level this morning, as well as the need to work past it quickly.

“The first thing is get rid of the frustration, and we’ve tried to deal with that today,” he said. “We were a frustrated team, due in large part to how we played, and also due to how well Arizona played. The frustration just built as the night went on and it just made things worse. We played a really good game against Minnesota and we didn’t play very well against Arizona, let’s move on.”

Perhaps one additional element to that frustration was the result not matching the effort on Friday.

The Kings played well against Minnesota, but came away with a 4-2 defeat, and no points in the standings. Forward Alex Iafallo agreed that perhaps the way Friday went added into that frustration, but emphasized the need to keep pushing forward and let the past be the past.

“I think so – It shouldn’t be a factor, but at the same time, we can’t get frustrated and we’ve got to play every period,” Iafallo said this morning. “We can’t think in the past. We’ve got to keep playing and keep working towards our goal. Obviously we were frustrated, but we’ve got another game tonight to pick us up and moving forward, we’re never out until the last game.”

It would probably be more of a story if the Kings weren’t frustrated than that they are, considering the way this past weekend went, at this stage in the season. But the important message from this morning was to put it in the past and move on.

Doing exactly that, moving on to tonight, the Kings host Anaheim for the first of two this week at STAPLES Center, followed by two more in Orange County. In terms of tonight, to right the ship and get back on track in Game 1 against the Ducks, McLellan put the focus on the transition from defensemen to forwards, while Iafallo noted the team’s forecheck as a key. Both likely will be, both today and throughout the week.

TM – For us, a big part of our game is how we come out of our zone, how well we connect between [defensemen] and forwards, and that wasn’t very good, obviously, against Arizona, and that will have to be better tonight for us to have a chance at success.

AI –We’ve got to use our forecheck. It hasn’t been as great as it should be, but I feel like if we’re on on the forecheck, and we’re getting a lot of chances, it’s going to put them on their heels. They’re a good team as well and if we use our forecheck and use all three zones to our advantage, I think we’ll be fine.

For more information on the recalls of Andersson and Byfield from earlier this morning, CLICK HERE.

The sense with Byfield is that he remains at least a couple of practices off from making his NHL debut. The Kings preference up until this point has been to not use a year of his entry-level contract, which means we’d see him for a maximum of six games down the stretch. If a couple of guys up front are banged up, Andersson would be the more likely option tonight, as he was already added once on an emergency basis, on Saturday.

Looking at the latter, he’s had a run of games before, but has only appeared in two games over the last two months in the NHL. McLellan said this morning that Andersson will “get his opportunity” in the lineup coming up.

Regarding the former, McLellan had the following to say about the second-overall pick this morning –

“That’s one of the reasons why he’s here right now. He has had a real good run at the American League level, he’s learned a lot about the pro game, the coaches did a tremendous job with him to this point down there, and he’s responded appropriately. He’s up here this week, on the taxi squad, it’ll give him a chance to be around our team, the coaching staff, future teammates, and in particular Anze, and absorb it all throughout the week. We’ll see as time goes on where he fits in.”

Not tonight for Byfield, but as the Kings progress through the week, we’ll see how the situation shakes out.

Anderson gave an open and honest evaluation of the first goal scored by Kirill Kaprizov on Friday evening, in which he was beaten on a 1-on-1 play by the talented forward. The way that he handled the question, candidly, shows why the organization thinks so highly of his character.

The 21-year-old defenseman also spoke about the process of playing with a player who isn’t Drew Doughty, as he partnered with Matt Roy for half the game on Saturday, plus things he’s learned from this season, and the developing group of younger players, both on the active roster and within the organization.