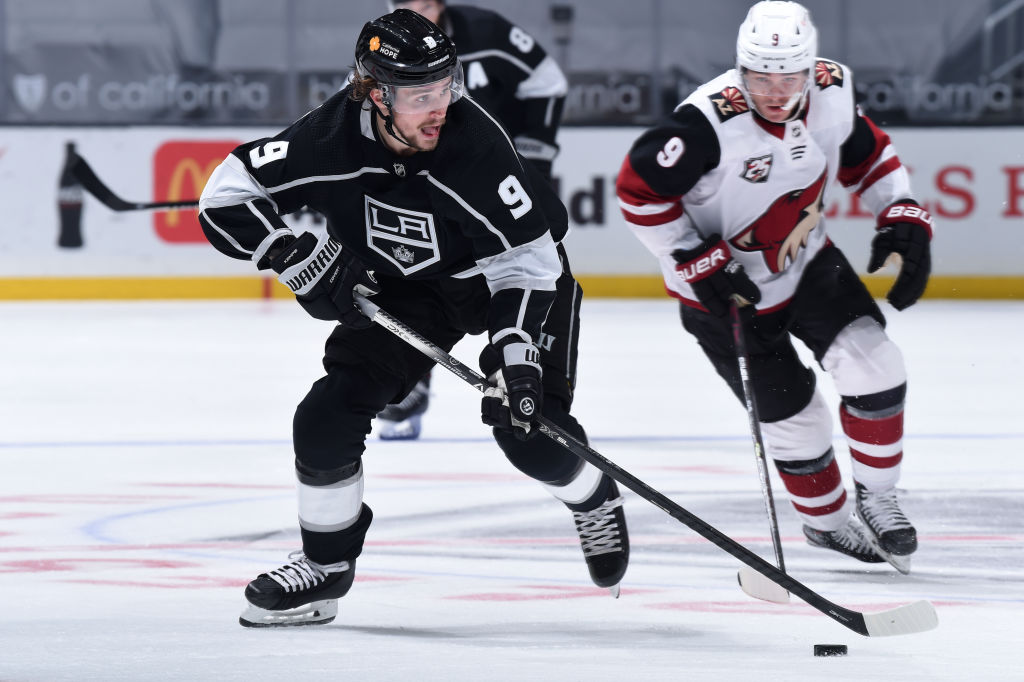 TONIGHT’S MATCHUP: The Kings complete a back-to-back set this evening at STAPLES Center, with the Arizona Coyotes in town for the final time this season.

KINGS VITALS: Considering the back-to-back set this weekend, the Kings did not hold a morning skate today, in advance of tonight’s game against the Coyotes.

As a reference, here’s how the Kings lined up yesterday, a game in which they controlled the shot margins, but came up on the wrong side of the goal-scoring totals –

Options on the active roster to check-in, if Todd McLellan decides to make a change this evening, are Matt Luff at forward and Kale Clague, Kurtis MacDermid and Christian Wolanin on the backend.

UPDATE – Forward Lias Andersson was activated from the taxi squad earlier today. He is also an option tonight at forward.

At forward, three of the four units were on the positive side of shot attempts last night, with the lone outlier being the Lizotte line, which was coming off of an eight-point night on Tuesday against Anaheim.

The best line on many fronts was the Vilardi line, which played its best game in its short time together. That trio, with Adrian Kempe and Trevor Moore on the wings, controlled 64% of shot attempts, 73% of shots on goal, 67% of scoring chances and 80% of high-danger chances. A small sample size, especially after they were on the opposite end of the stick on Tuesday, but a noticeably strong effort from that line, both analytically and from those who watched the game. McLellan was happy with how that line set the tone for the team on the forecheck, with their goal an evident example.

“I think forechecking is a contagious part of the game, like shotblocking is or anything else,” McLellan said last night. “They set the tone, with their tenacity early in the game. We were using the word hunt a lot on the bench and they were doing that, and it rubbed off on a couple of other lines. As a result it went through the whole team, and all of a sudden we have that mentality, rather than a pull out or a back off mentality, and we had it right until the end. The three of them did a really good job of initiating that.”

Look at that line’s goal as a perfect example. Kempe not only kept the play alive below the goal line, feeding a pinching Sean Walker, but also used his body to shield off his man down low, which allowed Walker’s dump to get to Vilardi behind the net. Two plays that did not earn him an assist, but were critical to the goal. A good sign, that will be important in continuing.

Per Alex Kinkopf of ArizonaCoyotes.com, the Coyotes are not expected to make any lineup changes this evening, from their most recent game. Here’s how the Coyotes lined up last time out, on Wednesday, in a defeat against Minnesota –

The Coyotes announced that forward Conor Garland is out “week-to-week” with a lower-body injury. Garland has 32 points (10-22-32) from 45 games played this season, leading the team with 22 assists, a big loss for the visitors.

To preface this section, with 12 games remaining in a playoff push, the only stat that counts in the standings is points. And last night, the Kings got no points, which makes it a disappointing result.

That being said, the Kings controlled 63.6% of shots on goal last night against the Wild, their third-best clip of the season. With 37 scoring chances for, the Kings tied a season-high for a single game, and their 17 high-danger chances for were the fourth most they’ve had in a game this season.

The team felt they played well last night, too.

“I think we played a pretty solid game, to be honest,” Kempe said last night. “Had some good chances, but they’re a good defensive team as well, so they don’t give up a lot. We tried our best, had some good looks, had some tough bounces, but overall……obviously it’s frustrating, losing, but I think we’ve got to take the good things with us, recharge the batteries, come back and play the same way tomorrow.”

If the Kings post that staggering of a disparity in terms of puck possession, you’d expect them to win more often than they lose, especially considering they won’t face the individual magic of Kirill Kaprizov every night.

“Actually quite happy with our game,” he said yesterday. “We had some tenacity to our forecheck, we kept a lot of pucks alive, more so than we’ve done in the last little while, it was probably the best night of attacking we’ve had in a long time. We shot the puck, we got it back, created a lot in and around the net, scrambles, just didn’t find a way to either keep one out of our net or get the extra one. I don’t have a lot of complaints about our play tonight.”

McLellan has spoken of the “ups and downs” of his younger players over the last couple of days, focusing in on two of his first-year centermen, Gabriel Vilardi and Jaret Anderson-Dolan.

McLellan offered the following on both players –

On Vilardi – Faceoffs are getting better, his detail and awareness defensively is getting better, I think his stamina has improved. He needed a bit of rest, or a breather physically, so I think his recovery has been better. There’s still a lot to work on. [Many reporters] continually ask about him, so that’s how much pressure is on this young man, rightfully or wrongfully. He came up last year and we all thought he was a 70-point guy and going to be the rookie of the year. That would have been great, but that’s not the case. He’s developing at his own pace, his own steady progress, there’s ups and downs all the time, and you can’t just evaluate him on offense, he’s got to be able to provide some other things for us. There’s nights when he definitely does that, there’s nights where he needs to work on it. Sounds to me, a lot like a young player entering the league that isn’t named McDavid, Matthews, Draisaitl, he’s a regular high pick that’s trying to cut his teeth in the league. He’ll need time, he’ll need more experience and he’ll need to take advantage of the opportunity that he’s getting.

On Anderson-Dolan – What he’s done is he’s settled in right now, and that is common for players. He started the season not playing a lot, just waiting, waiting, waiting for his opportunity. He played, he scored, had a lot of confidence, and really took off. Got hurt, due to no fault of his own, and missed a lot of the primetime stuff that he needed to continue to work on and grow, a shoulder injury doesn’t allow you do a lot other than skate. Since that time, he came back real early and was effective, and now it’s hard. He’s not somebody I worry too much about. He’s the consummate pro, he works at his game, he takes responsibility and owns his shifts, I believe he understands and has hockey sense. With the concepts that are put into place, he’s capable of grabbing onto them, it’s just getting a little more confidence back again. He still plays power play, he’s on the penalty kill, it’s a lot to handle for a young player. We’re asking young players to take on a lot of responsibility, by design, we want them to, but it’s not an easy task. You go through ups and downs and JAD is experiencing that right now.

Vilardi experienced a very big up last night – His line was mentioned earlier as being solid last night, and his assist at the end of the first period snapped an eight-game pointless drought. He also set season highs at 5-on-5 in both individual Corsi For (4) and on-ice Corsi For (18).

Anderson-Dolan was one of the larger ups for the Kings on either side of his injury, as an impactful player at both ends of the ice, but has been moved down to the fourth line over the last few games. Not to say his play has dropped, as he’s moved around the lineup throughout his time in the NHL.

Kings and Coyotes, coming up tonight at STAPLES Center.