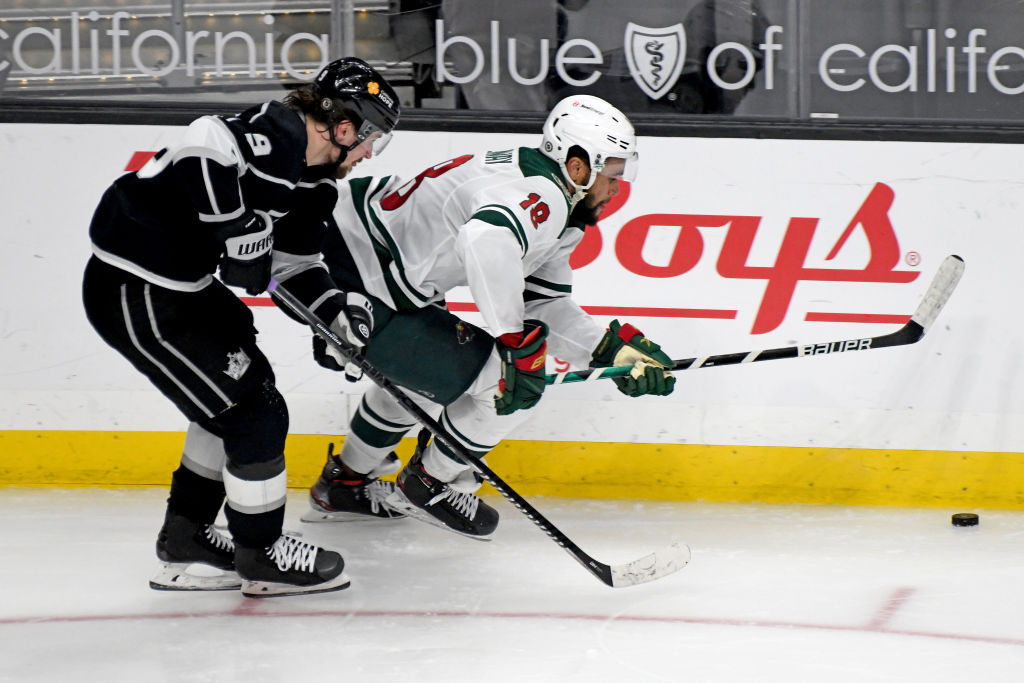 The LA Kings were unable to make it two wins in a row, despite a substantial disparity in their favor in terms of shot totals, after a 4-2 defeat against the Minnesota Wild.

After hitting a post in the game’s first five minutes, the Wild opened the scoring shortly after, with Kirill Kaprizov’s 20th goal of the season. After the Kings turned the puck over at the offensive blueline, Kaprizov skated down the right wing, pulled the puck between his legs in the offensive zone, cut towards the net and buried the game-opening goal with a highlight-reel tally.

At the death of the first period, the Kings tied the game at one, with Trevor Moore cashing in from close range. After Adrian Kempe won the puck below the goal line, Gabriel Vilardi gained possession behind the net and fed Moore in front, for the bang-bang goal with less than a second to play, sending the game into the intermission all square.

Kaprizov put the visitors back on top with a power-play goal in the second period. In the right-hand circle, the Wild winger changed his angle slightly and beat Petersen with a quick-release wrist shot on the glove side to make it a 2-1 game, with his sixth goal from eight games against the Kings this season.

After the first half of the third period saw a much tighter-checking contest than the first 40, the Wild got an insurance goal with just over eight minutes left in regulation, as Nico Sturm buried a rebound in front, off of a Nick Bonino wraparound attempt. Sturm’s eighth goal of the season gave Minnesota a two-goal lead it would not relinquish.

The Kings did pull one goal back, however, as Anze Kopitar and Drew Doughty combined on a nice play to make it a 3-2 game. Doughty, skating through the neutral zone, executed a spinning pass to Kopitar to gain the offensive blue line. From the left-wing, Kopitar faked a shot, went around the net and buried a wraparound effort for his 11th goal of the season.

After a flurry of chances late for the home team, including a 6-on-4 advantage, the Wild finally iced the game with an empty-net goal with 10 seconds left on the clock from Joel Eriksson Ek.

Hear from Vilardi, Kempe and Todd McLellan from after tonight’s game.

On the way he felt the team played, despite the outcome
I think we played a pretty good 60 minutes, they’re a good team, they’re going to have their chances. They’ve shown all year they’re very hard to play against. I think we played a pretty solid game, to be honest. Had some good chances, but they’re a good defensive team as well, so they don’t give up a lot. We tried our best, had some good looks, had some tough bounces, but overall…obviously it’s frustrating, losing, but I think we’ve got to take the good things with us, recharge the batteries, come back and play the same way tomorrow.

On the performance of his line tonight
We haven’t played for too long together, so we started to build some chemistry. We’ve been on different lines pretty much all year, but playing with Gabe and Mooresy for the last couple of games, we started to get some chemistry going and build off that. Just keep going.

On his biggest takeaway from tonight’s game to apply tomorrow against Arizona
Just the overall, 60-minute game we played. We played solid defense, as I said before, they’re going to get some chances, because they’re a good team, but I think the forecheck was good from every line, but we really grinded it out and had some good looks. A couple of tough bounces on the PK for a goal for them, but I think that’s something we’ve just got to keep doing, and it’s something we’ve got to have every game here to make a push for the playoffs.

On if he felt the shots on goal reflected the play tonight, and his takeaways from the game
Actually quite happy with our game. We had some tenacity to our forecheck, we kept a lot of pucks alive, more so than we’ve done in the last little while, it was probably the best night of attacking we’ve had in a long time. We shot the puck, we got it back, created a lot in and around the net, scrambles, just didn’t find a way to either keep one out of our net or get the extra one. I don’t have a lot of complaints about our play tonight.

On if a loss when you play well stings more, considering playoff implications
A loss is a loss, we’re moving on. In fact, we better all be over it already, because we’ve got a big game tomorrow. We didn’t climb tonight, but we didn’t fall, that’s a good thing, so we get another chance tomorrow. We put the same type of effort in and the same type of game and we’ll win our share.

On the Vilardi line, and their play on the forecheck tonight
I think forechecking is a contagious part of the game, like shotblocking is or anything else. They set the tone tonight, with their tenacity early in the game. We were using the word hunt a lot on the bench and they were doing that, and it rubbed off on a couple of other lines. As a result it went through the whole team, and all of a sudden we have that mentality, rather than a pull out or a back off mentality, and we had it right until the end. The three of them did a really good job of initiating that.

On Kirill Kaprizov’s play
He’s going to be, at least in my opinion, the rookie of the year for a good reason. He’s got five or six pro years under his belt, he’s brought a great skillset to the National League. Minnesota’s lucky to have him, we’re lucky to have him as a league, and he’s a heck of a player. Right now, he’s setting himself up to have a real good career. He made good on a couple of his opportunities tonight, it helped them win.

– With his first-period goal tonight, forward Trevor Moore now has three goals over his last three games played.
– Forward Gabriel Vilardi snapped an eight-game pointless drought with the primary assist on Moore’s goal.
– Forward Anze Kopitar collected the 995th point of his NHL career with a goal in the third period, his second consecutive game with a goal.
– Defenseman Drew Doughty collected an assist for the second straight game, his 25th helper of the season, moving him into sole possession of eighth in the NHL in points by a defenseman this season.
– The Kings set a single-period high for shots in a period with 20 in the second period this evening.

LA is not scheduled to hold a morning skate, considering the back-to-back, in advance of tomorrow evening’s game against Arizona.