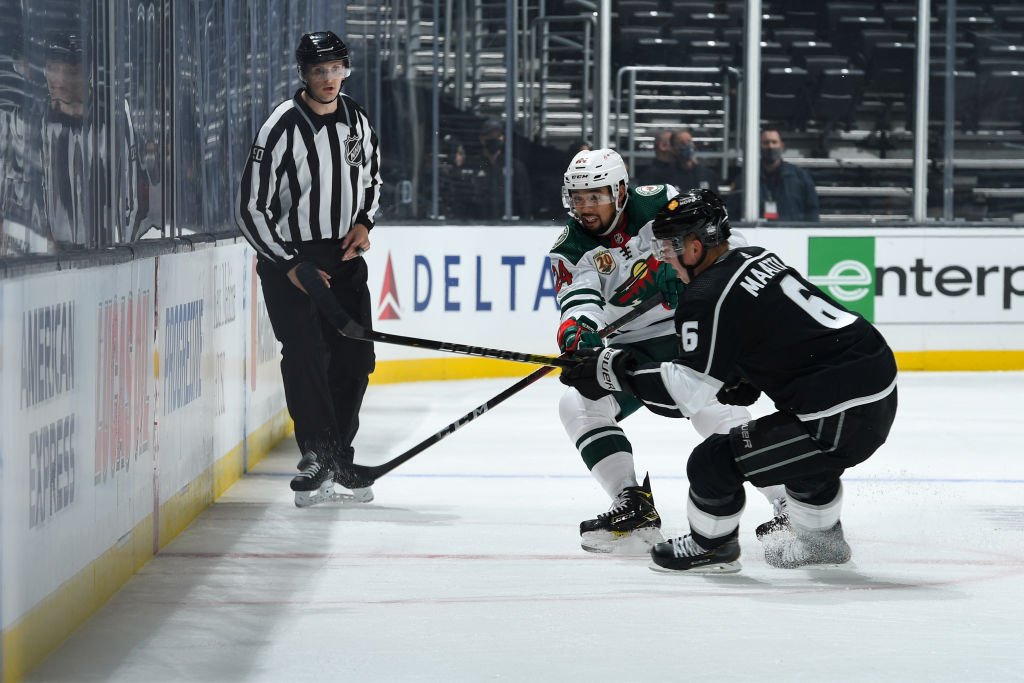 TONIGHT’S MATCHUP: The Kings are back in action this evening at STAPLES Center, hosting the Minnesota Wild to begin a back-to-back set on home ice.

HEAD-TO-HEAD: After what felt like the teams played each other in every other series in January and February, the Kings and Wild finally conclude their season series tonight, after 55 days apart. Forward Anze Kopitar leads all Kings skaters with seven points (0-7-7) against Minnesota this season, while defenseman Drew Doughty and forward Dustin Brown each have tallied three goals. Forwards Kirill Kaprizov (3-4-7) and Jordan Greenway (0-7-7) lead all Minnesota skaters in points against the Kings, while forward Joel Eriksson Ek leads the way with five goals, tied for the most by any skater on any team against the Kings this season.

Looking at how the team lined up yesterday, following the win over Anaheim on Tuesday, there’s nothing that points to any lineup changes from that game, though as always, we wait and see. For reference, here’s how the Kings lined up against the Ducks –

If you want to get into semantics, the Lizotte line appeared to be the “second” line yesterday, while the Maatta – Walker pairing got “second” pairing minutes on Tuesday. But no matter how you want to organize them, there did not appear to be any changes coming.

More on the forwards below, but looking specifically at the defensemen, I asked Todd McLellan this morning about potentially having his group of six blueliners in place that he’d like to see establish some consistency moving forward. He agreed with that notion and would like to see these pairings continue.

Of the six in the lineup on Tuesday, just Mikey Anderson and Drew Doughty have played in every game so far this season. All four others have missed time due to injury, leading to 11 defensemen dressing for games in total so far this season.

Seeing some new faces has given McLellan and his staff the opportunity to evaluate inexperienced players such as Kale Clague and Austin Strand, sometimes thrown into the deep end in NHL scenarios, which has its value. However, he noted that he is comfortable with the group that played on Tuesday.

“The fact that injuries, COVID, other circumstances, forced us to play a number of other young players, who are cutting their teeth in the league whether it’s Strand or Clague or anybody else, that allowed us to evaluate them and they provided evidence to us, whether they’re capable, or whether they need more time, strengths and weaknesses, so there is some value to that, but we feel comfortable with the six or seven that we have right now.”

The biggest question mark would be the goaltender for tonight. With the Kings playing back-to-back, you would likely expect to see the goaltenders split their games, but in which order? Cal Petersen played on Monday and played well in a 4-1 win over the Ducks. If he goes again, he would be making his third start of the season against the Wild, bringing a 1-0-1 record, a .933 save percentage and a 2.41 goals against average with him. If the rotation returns to Jonathan Quick, which is how the Kings have operated as of late, Quick has started 5-of-7 games versus Minnesota so far this season, with a 1-2-2 record, a .898 save percentage, a 3.16 goals-against average and one shutout, which came the last time these teams met at STAPLES Center on February 16.

Expected to get the nod between the pipes is goaltender Cam Talbot, who has started nine of Minnesota’s last 11 games played. Talbot has won all three of his starts against the Kings so far this season, with a .926 save percentage and a 2.26 goals against average. In his NHL career versus the Kings, Talbot is 10-9-0, with a .912 save percentage and a 2.72 goals-against average.

Per Sarah McLellan of the Star Tribune, the Wild aren’t expected to make any lineup changes tonight, which points to the following –

Last game, on Tuesday, it was the line of Carl Grundstrom – Blake Lizotte – Andreas Athanasiou that was the second line, as the trio combined for three goals and eight points. Two games ago, it was two goals from Trevor Moore’s line, as the winger tallied twice against Vegas. The game before that, it was Austin Wagner who scored the lone goal from the dubbed “bottom nine”.

Three games, three lines. The Kings are currently not a team that has a true second line and as such, it will be on the three lines behind the top line to produce on given nights. It might not be the same line every night and that’s okay, but at least one of the units will need to produce, ideally it’s more than just one, for the team to find some success offensively.

“The makeup of the lines is a little bit different,” McLellan said this morning. “We have some size in Vilardi, we have a smaller centerman in Lizotte, JAD’s game’s been up and down, those are our centers, we’ll play them kind of accordingly. The other night, Lizotte’s line was the one that sparked us, and we need that from lines 2, 3, 4, we can’t just rely on Kopi’s line. We’ve been able to witness what happens when the power play goes a little bit dry or maybe the Kopi line isn’t scoring, all of a sudden, it gets pretty dry. The fact that Lizzo’s line can step up and provide it would indicate that they were the second line that night, but maybe tonight it’s somebody else’s turn. We need balance from all three of the remaining lines.”

After Tuesday’s win, the Lizotte line earned the unofficial “bump” to the second line in the rotation heading into tonight’s matchup with Minnesota. That’s not necessarily indicative of much though, with the play of the groups determining how the three lines will be used moving forward. Hear from one member of that group, Carl Grundstrom, below.

The Stretch Run
Being a part of a stretch run, a playoff push, is new for many members of the 2020-21 LA Kings, once you look past the “veteran four” who remain from the team’s Stanley Cup runs.

One such member who has experienced it several times in his NHL career, however, is defenseman Olli Maatta, who has two Stanley Cup rings to his name and has qualified for the postseason in seven of his eight seasons in the NHL, with Pittsburgh and Chicago.

McLellan said earlier this season that the push for the playoffs is just as hard as the playoffs themselves, and speaking with Maatta earlier today, he emphasized the importance of each game at this juncture. Every game, at this point in the season, is meaningful.

“In the spot where we are, every game is a playoff game right now,” Maatta said. “We really have to make every game count. If you look at the teams we’re going to play, most of them are in the race, so those are the teams you have to beat. Those are the games that are going to be important. Everybody talks about the four-point game, that’s pretty much what every game is this year, because you’re playing against the same teams in the division.”

The concept of the four-point game is used so often this season because at times, the Kings were playing them every night. At this point, games against Minnesota don’t quite have that feeling, with the Wild all but locked in, but Saturday’s matchup with Arizona certainly does.

It’s a unique quirk of this season’s one-off schedule, that has kept seven of the eight teams in the West Division in the hunt with just three weeks left of the schedule.

“It’s definitely different, because you don’t have the different conference teams, that you play a couple times a year, you might win or lose, get those points, but that’s how you might catch somebody,” Maatta added. “Now, you play the same teams, so if you win, it’s huge, and if you lose, it’s going to feel really bad to what it normally is. That’s what it’s been, and it’s been kind of interesting that way.”

Kings and Wild tonight at STAPLES Center to conclude the season series!

By Zach Dooley
214 Comments
Behind the Scenes