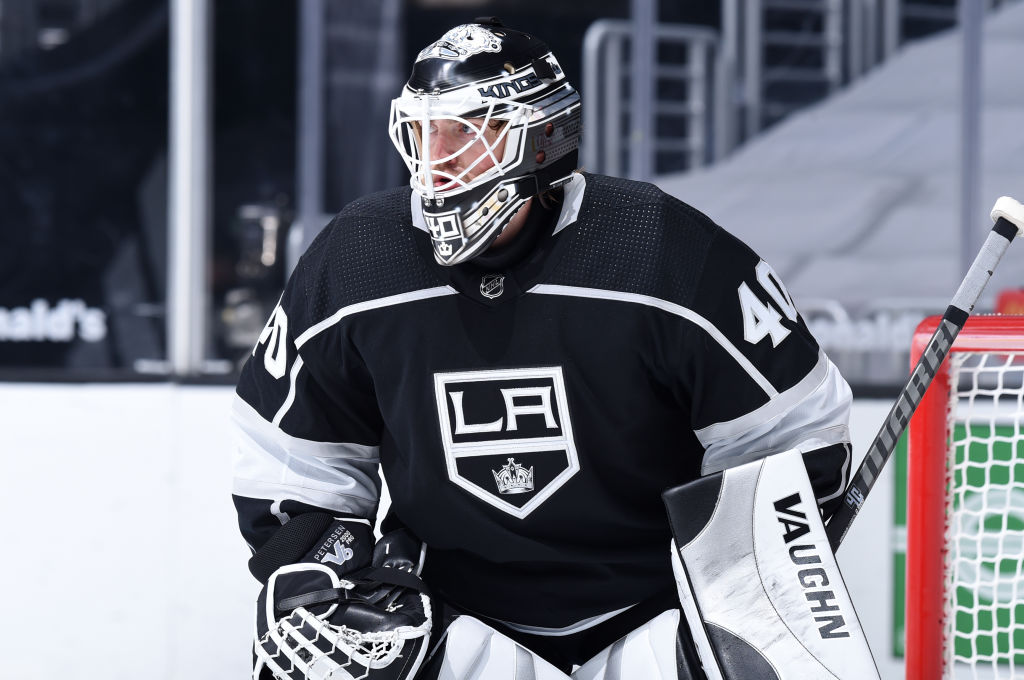 The LA Kings were back on the ice this morning at Toyota Sports Performance Center in El Segundo, CA. Here’s how the Kings lined up today, by jersey color –

Nothing here to suggest any changes from Tuesday’s win over Anaheim, though it does look to label the Lizotte line as the “second line”, following their strong performance, and the Vilardi line now as a part of the bottom six.

Matt Roy took a puck to the face in Tuesday’s win, but missed just a few minutes and finished the game. Brendan Lemieux appeared to injure his hand in his fight against Josh Manson, and went down the tunnel late in the third period, but was a full participant in today’s skate.

– The Kings reverted back to their original power-play units on Tuesday, after switching them up in the previous game against Vegas. Todd McLellan was happy with the performance of the first unit, but not necessarily the second unit, as he went back to what had worked earlier in the season.

“Half yes and half no,” he said. “I thought the Kopi group had a shot, I think Kempe rang one off the crossbar, there was some traffic in and around that area, puck recovery was okay. The second unit, we ended up taking a penalty on the power play, so that shortened their opportunity, and they struggled to gain possession on any type of loose pucks. That still has to improve.”

The likely way forward is to keep the units going as we saw on Tuesday, with the Kopitar unit loaded up as a “top unit”, seeing more of the ice time, as has been the case outside of that one game versus Vegas. The second unit has seen a lot of moving pieces throughout the season, which has resulted in a mixed bag, without a ton of production.

– The playoff picture in the West Division is……interesting.

The Kings are mired in a stretch of six victories from their last 18 games, but a look around the division shows that none of the teams around them have fared much better. Looking at the last ten games for Arizona, St. Louis, San Jose and Los Angeles, no team has posted a better record than the Kings 4-6-0 mark, which has allowed them to stay in the hunt.

“Well, if we’re still in the playoff race, that means there’s five other teams in our division in the playoff race right around there,” McLellan said. “I don’t know if we’re fortunate, or if we’re just with the rest of the pack. We’re there, and we need to try and take advantage of it.”

– The Kings schedule is complete once again.

No post yesterday, with the site being updated, but the NHL has rescheduled to two games that were postponed in Colorado to Wednesday, 5/12 and Thursday, 5/13. Both games will begin at 6 PM Pacific time. The first game will be broadcast on Bally Sports SoCal, and the second game will air on Bally Sports West. A ways down the road here, but here’s to hoping those games have some meaning for the Kings.

– Kings 2020 draft pick Martin Chromiak has signed an amateur try out with the AHL’s Ontario Reign. It has been reported that Chromiak has begun his quarantine process, and the 18-year-old forward is expected to join the Reign for the remainder of the season.

Chromiak was expected to play this season in then OHL with the Kingston Frontenacs, but with that league officially cancelling their season, that will no longer be possible. The Slovakian winger spent this season in his native country’s top division with Trencin Dukla, and collected 19 points (7-12-19) from 32 games played.

Chromiak also represented his nation at the 2021 World Junior Championships, as he collected one goal from five games played, with Slovakia bowing out in the quarterfinals against fellow Kings prospects Alex Turcotte, Arthur Kaliyev and Brock Faber.

Enjoy this very filthy goal from Chromiak in a U-20 Series against the Czech Republic from earlier this month……what’s the Slovakian word for Michigan?

Chromiak ties the score, Slovakia U20 – Czech Republic U20 1-1 after the first period.

Hear from Todd McLellan, Cal Petersen and Brendan Lemieux from after today’s practice.

Cal Petersen
On facing the same teams game-after-game this season
Yeah, I think it’s a good thing and I think it can work against you too, because the same teams have the same book against you too. That’s probably what makes the games so competitive, is that each team knows exactly what the other team is doing, and it’s more so who is going to execute their system better than the other one. For me, it definitely helps seeing similar shooters, understanding their tendancies a little bit, but on the flip side they see you a lot. It’s a good way to go about it, and it’s all about execution.

On Drew Doughty’s block on Tuesday, and what that means to him as a goaltender
It’s awesome, not only for me – it obviously helped me, because I was in a pretty vulnerable position – but it’s just a guy who is willing to put his body on the line and block a shot. Especially, in the second period, it can seem like a meaningless play with where the game was, but that was huge for us. They score that goal, it’s a bit of a different game. It’s huge, it shows why he’s a leader, it shows why he wears a letter, it’s a testament to how much he sacrifices for this team. He does it on a regular basis, sometimes the puck doesn’t hit him, but I think he always has that mentality regardless.

On the isolation and off-ice challenges faced this season by teams around the league
It’s really challenging. Any time, when you’re trying to come together as a team, it’s a lot of the things that happen away from the rink that help that. You can only do so much when you get to the rink, into the locker room, and then guys go off and just get back to their personal lives. It’s really tough when you don’t have those opportunities to go to dinner, get to know guys that maybe you wouldn’t see as much at the rink. I think that’s tough and it’s hard when it’s just hockey all the time. As a human being, you need those things to break it up and get your mind off hockey, and when you can’t do a lot of those things, whether it’s dinner or activities, it can be hard on the mental aspect of it. It’s just one of the challenges we have to deal with this year, part of the deal, but at least things are working upwards.

Brendan Lemieux
On how he’s settled in since joining the Kings midseason
I think it’s taken some time to get comfortable with the structure, it’s a big change from what I played in New York, but I’m enjoying the process of it and I’m learning a lot. It’s been fun, we’re looking to make a push here, so we’re all really excited and hopeful in our dressing room.

On the difficulties of hopping right into game action, after the time away during quarantine
It was a challenge, but I’m a professional and that’s what we’re asked. There’s plenty of guys who have been out for longer periods than I was out. I’m fortunate to have my health, fortunate to have had it, but it’s been a challenging year for me individually at times, but that’s what makes you a better player in the long run. I’m enjoying the process of getting better every day, and working here with our group. It’s an exciting young group and I’m happy to be a part of it.

On the best career advice he’s received from his dad, Claude Lemieux
That’s tough, my dad is my agent still, he’s obviously my dad and we talk after almost every game, so I could go on and on. I think “never too high, never too low” is probably my favorite piece of advice. It’s a long season, this year is shorter I guess, but there’s a lot of ups and downs and I think just staying even-keeled is the most important one that I’ve found over the years.

Coming up later today, LAKI contributor Jack Jablonski takes a look at the Ontario Reign as of late, and how the group has fared since their challenging start to the season.