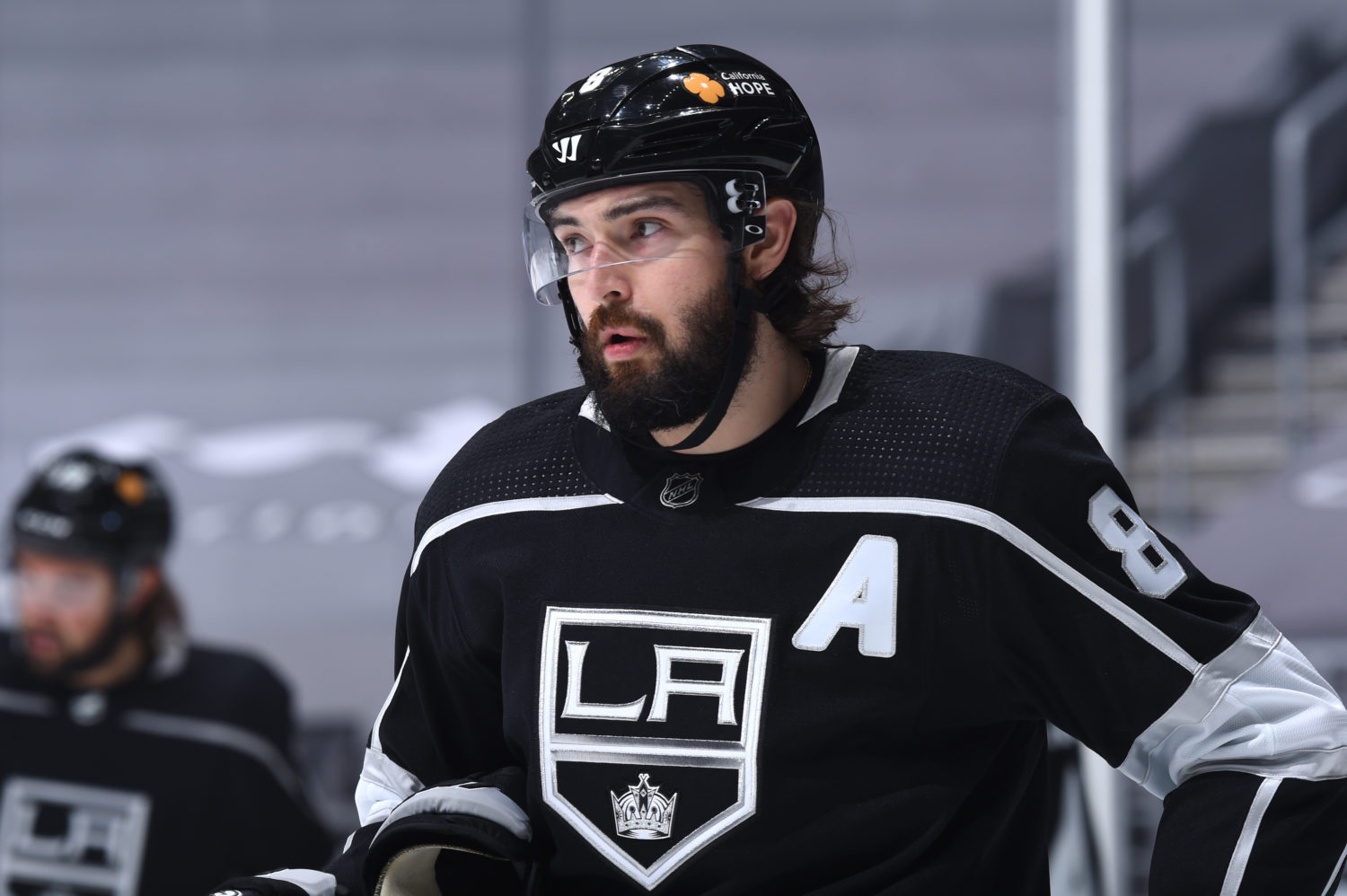 The Kings returned to the ice this afternoon for practice at Toyota Sports Performance Center, in between games against the Vegas Golden Knights.

Last night’s lineup saw a direct substitution with Carl Grundstrom entering in place of Jeff Carter, now of the Pittsburgh Penguins. Today’s groupings saw mixed jerseys throughout the skate, and no specific line combinations, so we wait until tomorrow for a better idea there.

A bright spot today was that defenseman Tobias Bjornfot rejoined the full group for the first time since he suffered an injury on 3/31 in Vegas. Bjornfot was wearing a non-contact red jersey, after General Manager Rob Blake shared with us yesterday that Bjornfot had resumed skating on his own. Good signs there.

In terms of the situation at hand, Todd McLellan was pretty clear when referring to what halted the momentum for the Kings last night, and that was the performance of the power play. Specifically looking at a power-play opportunity late in the second period, the Kings ceded two shorthanded breakaways against, with the second converted by Mark Stone to tie the game at two heading into the second intermission.

The man advantage, which went 0-of-3, was an obvious factor in the turning of the game in favor of Vegas, and defenseman Drew Doughty spoke today about his own disappointment in that unit.

“They were just dumb plays, just putting the puck right on the other team’s tape,” he said this morning. “If you’re waiting for the puck standing still and the other guy is standing still, it’s going to be hard to catch him. They were just not very smart plays. Not only did we give them breakaways, but we didn’t create enough opportunities in my opinion. We need to get back to simplifying the game and shooting pucks.”

McLellan said specifically that the Kings’ power play was the turning point last night, though while Doughty agreed to an extent, he also felt that the team had the opportunity to go back into the locker room at 2-2 and regroup, compose themselves for the third. He said that everyone on that unit was disappointed with the goal conceded nonetheless.

“The thing was, they got their second goal, on the PK for them, and we got to go in right after the period, so I felt like we were able to regroup and come back for the third,” he added. “That’s the worst thing the power play can do for us, everyone that is a part of that power play is super disappointed in ourselves, and we need to clean that up.”

Doughty, who offers candor and honest evaluations of situations that is always appreciated, added we might see some “parts moving around” on the power play to “change some things up.”

Speaking with McLellan this morning, he did say that there is a possibility to things perhaps getting stale on a power play when it comes to personnel, or where players are stationed in the offensive zone setup.

“It can go stale,” McLellan said this morning. “14 of our last 16 have been against two teams, San Jose and Vegas, and they’ve given us trouble on our power play all year. We also have to be careful about completely taking away all of the good that was established earlier in the year, because a certain team or two teams give us issues doesn’t mean we’re not capable of maintaining a high level. It can go stale. I thought last night was the poorest our power play has looked, and I talked about it after the game, how it sucked the life out of us, really handed the momentum over to the other team, and that can’t happen. We’re slow, we’re thinking it right now, we’re not executing. We see things and it’s too late to use the outlet that we see, so perhaps may need a little bit of a jolt.”

The thought of playing San Jose and Vegas repeatedly is something I didn’t think much of. Over the stretch McLellan described, the Kings are 2-of-34 on the PP against Vegas and San Jose exclusively, and just 2-of-20 this season against the Golden Knights. Against those two teams in total, the Kings are just 14% on the power play, and that includes one 3-for-6 effort versus San Jose early in the season. LA has scored on 25.9% of its opportunities against the rest of the division.

No such excuse really matters at this stage in the season, but it’s a way of looking at the situation. Don’t be surprised if the power-play units look a bit different come tomorrow evening.

McLellan also touched on the possibility of an expanded roster down the stretch, having fans back at STAPLES Center and his impressions of the top two teams in the West Division, Colorado & Vegas.

– Doughty had a good take on Alex Iafallo’s extension, going as far to say that as the trade deadline approach, he was ready to call Rob Blake himself to help a deal to get done. Very complementary of his teammate, very happy to have him stay with the organization.

“Very well deserved contract. It was coming down to the wire and I was texting him, and I was like ‘do you want me to just call Blakey to sign you, like what’s going on here, you better not get traded.’ Every single guy on this team wanted AI back, such a great, two-way player, does all the little things right. Maybe he’s not super flashy like some other guys, but he just does everything right. Great person and a great player. We all knew it was going to get done, there was never a question that we would trade him, in the players’ eyes at least. Really happy for him.”

– I asked Jonathan Quick this morning about the run that his former goalie partner, Jack Campbell, just recently finished up. Campbell set an NHL record with 11 straight wins to open the season, and has posted a sub-2.00 goals against average and a .930 save percentage from his first 12 starts with Toronto.

– Both Doughty and Quick gave their thoughts on Jeff Carter as well, and we’ll share those along with others from players, coaches and management here on LAKI later in the week.

– In terms of roster moves, the Kings reassigned forward Lias Andersson and defenseman Austin Strand to the AHL this morning. The Ontario Reign travel to Irvine this afternoon to face the San Diego Gulls later this evening, with both players expected to be in Ontario’s lineup. The pair combined for a goal on Sunday for Ontario, the team’s only tally in a 5-1 loss to San Jose.

Forward Aidan Dudas and defenseman Cole Hults were reassigned the other way, to round out the taxi squad. 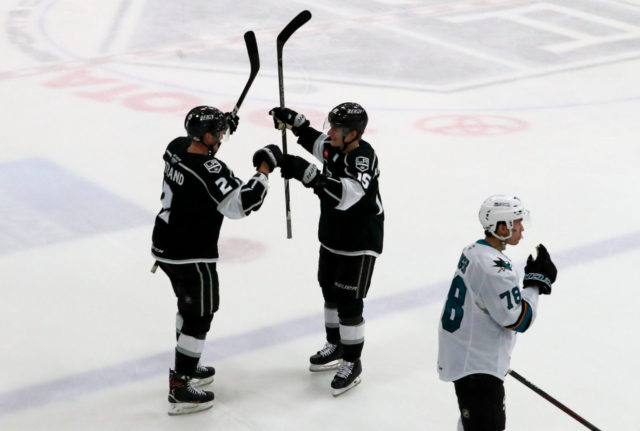