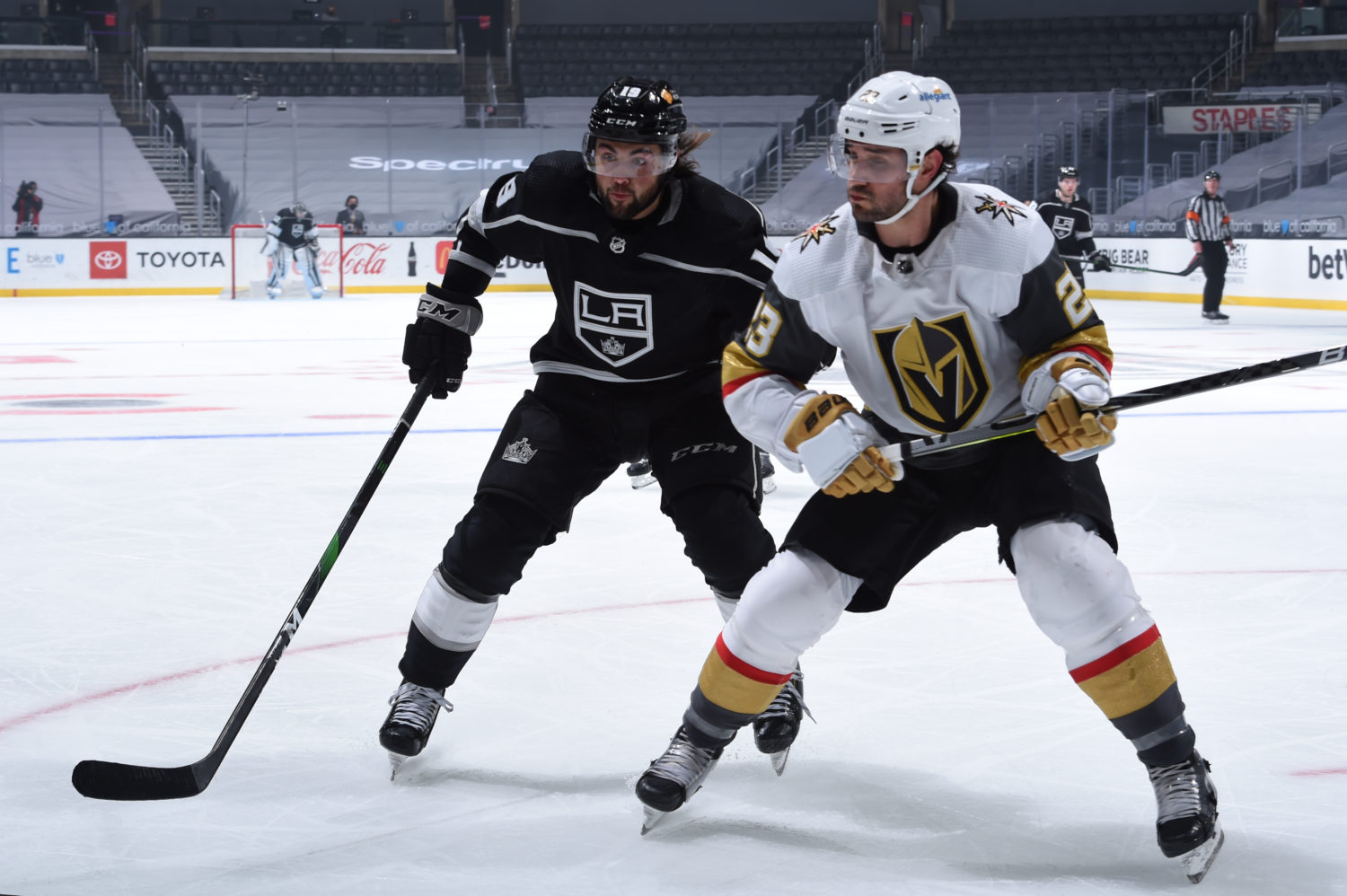 TONIGHT’S MATCHUP: The Kings are back at STAPLES Center this evening to begin a two-game set against the Vegas Golden Knights.

HEAD-TO-HEAD: Goaltender Cal Petersen has been the star of the show against Vegas this season, with a 2-1-0 record, a .944 save percentage and a 2.21 goals-against average from four appearances. With six points from six games played, forward Anze Kopitar (1-5-6) leads all Kings skaters versus Vegas this season, while forwards Alex Iafallo and Dustin Brown have two goals each. For the Golden Knights, forward Jonathan Marchessault leads all skaters with seven points (1-6-7) this season, while William Karlsson has three goals and six points.

KINGS VITALS: Following yesterday’s off day, the Kings returned to the ice for a full team skate this morning at Toyota Sports Performance Center.

Following last night’s news of Jeff Carter being traded to the Pittsburgh Penguins, the Kings will naturally have at least one lineup change this evening at the forward position. Todd McLellan confirmed this morning that Carl Grundstrom, who was a healthy scratch on Saturday in San Jose, will return to the lineup. Forwards Matt Luff was recalled to the active roster this afternoon, and is also an option.

On the blueline, seven defensemen took the ice today, with no indications that we will see any lineup changes from the group of six that skated in San Jose on Saturday. McLellan did not commit to any changes or specific combinations on the blueline, at this time, and said that he is still “sorting out” the defensemen. The group of available options includes Christian Wolanin, who skated in both games against the Sharks over the weekend, getting really his first glimpses at the organization’s newest blueliner.

“Mobility, a puck-moving defenseman, he’s come as advertised,” McLellan said. “It’s not easy to play two minor-league games and then get called up right away and play, figure out systems, structure, your teammates, but he’s done a pretty good job. You can see that he can skate, he skates well with the puck, head up, some good outlet passes. There’s questions about his strength and that type of stuff, but if his legs get him out of a lot of trouble, he can play with some effencies. We still have to make some judgement calls on him, so I think getting him in and giving him the opportunity, he looks confident, he looks like he belongs. Good signs.”

McLellan has rotated his goaltenders on a pretty much even basis thus far over this crowded stretch of games. That rotation would point to Cal Petersen playing tonight. Petersen’s season-long success against Vegas is documented above, but it’s not just been this season. From six career starts against the high-powered Golden Knights, Petersen is 4-1-0, with a .943 save percentage and a 2.12 goals-against average. Here’s to hoping that trend continues.

GOLDEN KNIGHTS VITALS: The Golden Knights held an optional morning skate today, after they played and won last night in Arizona, completing a two-game sweep over the Coyotes.

Marc-Andre Fleury played last night, and earned the shutout, so the back-to-back points to Robin Lehner as the likely starter this evening. Lehner, who has lost just once in regulation all season, is 3-0-0 against the Kings this season with a .927 save percentage and a 2.00 goals-against average.

Here’s how the Golden Knights lined up last night –

Both Keegan Kolesar and Ryan Reaves left last night’s game early with injuries, and as of just recently, neither player will play tonight at STAPLES Center. The newest acquisition, Mattias Janmark, naturally will not play tonight either after he was acquired from Chicago in a deadline deal, but is expected to be available for Wednesday’s rematch. With Vegas extremely tight against the salary cap, we’ll need to see what kinds of moves they make, if any, in advance of tonight’s game.

– I asked McLellan if he expected that Dustin Brown would take the open role as an alternate captain, with Jeff Carter being traded yesterday. He said that, at this time, it’s too soon to answer that question, though he admitted that Brown would be an obvious choice, considering his natural leadership abilities. Regardless of whether or not he’s worn an “A” on his jersey, Brown has been a leader for the Kings for many years.

“We’re still in the midst of the deadline and getting prepared for a game,” he said. “It’s something that we need to talk about as a group, as an organization, and quite frankly we haven’t done that, in fairness to everybody involved. Brownie is a real obvious, simple choice. Tremendous leader, but we need to talk about some things.”

– Vegas is coming off of a game last night, while the Kings had an off day. This was a storyline we focused on exactly one week ago, with Arizona in town for a Monday evening game, after playing and traveling the night before. The Coyotes stormed out of the gates with three goals in eight minutes, while the Kings were flat. The Kings haven’t been a great team following a day off this season, with my unofficial count at one win from six games after a day where the Kings did not have a practice or a game. A fast start is important tonight, and forcing the Golden Knights to work early will hopefully pay dividends later on in the game.

– Will it be difficult for the players to focus, after one of their teammates, and leaders, was traded the day before? Blake and McLellan both stressed that the focus had to shift to tonight’s game, being an important one, with the Kings still involved in the playoff picture. Anze Kopitar added that it’s the players’ job to prepare for tonight’s game, and that once the puck is dropped, the team will be ready.

Puck drop is set for 7 PM tonight from STAPLES Center.