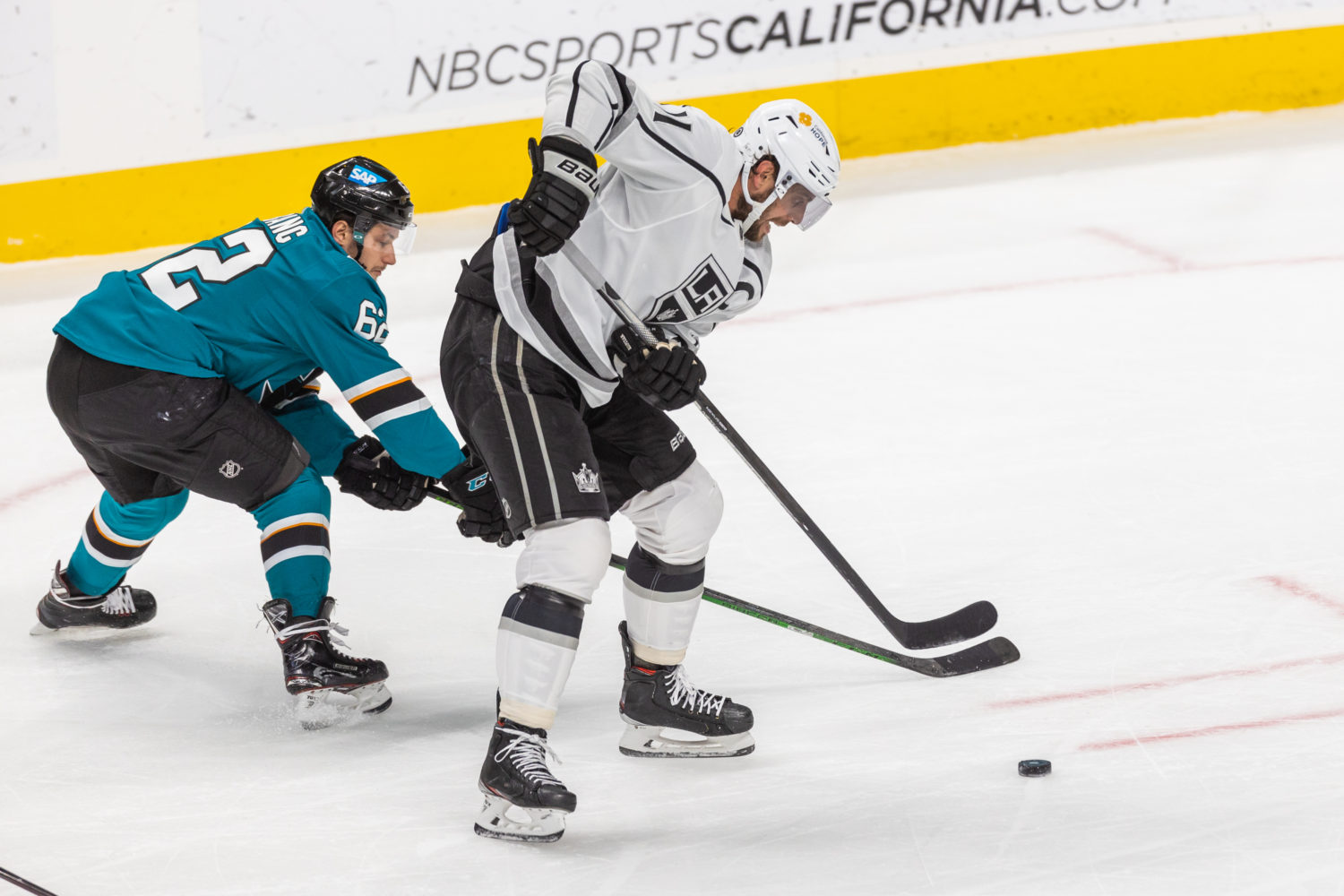 HEAD-TO-HEAD: Forward Dustin Brown (3-4-7) collected his team-leading seventh point of the season against San Jose, with the primary assist on the game-opening goal. That goal, scored by Alex Iafallo, was Iafallo’s 14th career point against San Jose (4-10-14), tying his personal career high against any one opponent. For the Sharks, goaltender Martin Jones was impactful yet again, as he improved to 6-1-0 versus the Kings this season. Jones has a .933 save percentage and a 2.32 goals-against average in head-to-head play. With two assists last night, forward Evander Kane took the season-lead in scoring against the Kings with eight points (4-4-8), also tied for the most among players on all teams.

KINGS VITALS: With the back-to-back set, the Kings did not hold a morning skate earlier today, in advance of tonight’s game.

The Kings made one lineup change yesterday, inserting defenseman Christian Wolanin for his debut with the team, in place of Austin Strand. Wolanin logged 15:24, with an even rating and one shot on goal, skating on a pairing with Sean Walker.

Options are aplenty on defense, with Strand available, as well as potentially Olli Maatta, who is on the trip with the team, and has been deemed close to returning by Head Coach Todd McLellan, with tonight’s game a possibility.

Up front, the biggest question likely lies with forward Gabriel Vilardi, who was a healthy scratch each of the past two games. No changes were made to the forwards after Wednesday’s win, but could we see Vilardi return to the lineup, off of the defeat last night? It’s an option, either at center or at wing. Lias Andersson, Matt Luff and Drake Rymsha make up the forwards on the taxi squad, if McLellan is looking for an additional change.

The back-to-back this weekend points towards Jonathan Quick in net tonight, following Cal Petersen’s start last night. Quick earned the victory on Wednesday over Arizona, and would be in line for his 41st career start against San Jose tonight, tied for third most in his career versus a team. The Connecticut native is 17-14-7 lifetime versus the Sharks, with a .907 and a 2.58.

SHARKS VITALS: Will it be Martin Jones again?

Martin Jones beats the Kings for 6th time this season. If Jones starts for #SJSharks on Saturday in series finale he can be first goalie to beat a team 7 times in a season since Henrik Lundqvist did it vs Devils in 2007-08


I don’t know where you go about finding that stat but it’s pretty incredible, isn’t it? Jones has won six of seven and improved to 19-5-3 in his NHL career against the Kings with last night’s victory. Jones has a .931 save percentage and a 2.14 goals-against average from 28 appearances against LAK.

It will not be Devin Dubnyk in goal, however, that much is clear. Dubnyk was traded to the Colorado Avalanche this morning, midway through my first draft and first round of proofreading. The Sharks acquired defenseman Greg Pateryn and a 2021 fifth-round selection.

Here’s how the Sharks lined up last night –

Josef Korenar is currently the taxi squad goaltender for the Sharks.

Second Time, Second Time
The LA Kings are 10-5-2 in the second games of back-to-backs so far this season. There are probably a lot of factors as to why that is, and it would be hard to pinpoint exactly one.

“The urgency, the fact that we can make some adjustments and fix some things from the game before,” McLellan said recently. “Leadership, conditioning, I think that’s an important part, we’ve got a well-conditioned team I believe, those are all factors I think that go into that second game.”

Two of the five regulation defeats, however, came against San Jose, and both have come within the last four two-game sets that the Kings have played. After last night’s game, McLellan, several times, referenced the “long chances” against as a point of improvement.

It wasn’t as if though these were unexpected, so that will continue to be an area of improvement in his mind tonight, with the hopes to see some of those opportunities against cut down.

“Well, the long chances, but trust me, we focused on those long chances, those rush chances that they’ve gotten against us, for the last five games,” he said. “At some point, it’s got to settle in, it’s got to sink in, to a number of players that just aren’t getting it right now.”

The Kings have, typically, adjusted well in between games, and have bounced back with a stronger performance in Game 2, especially after a loss on night one, with points in 10 of 14 games after falling in the first game.

It’s been phrased differently from press conference to press conference, but Todd McLellan has lamented losing goals off of the rush, off of “long chances” as he phrased it last night following several games against the Sharks so far this season.

It’d be easy to put the focal point from last night’s game, and a few others versus the Sharks, on the chances missed in the offensive end, because the Kings certainly had their looks. Breakaways, open nets, power-play chances, you name it. Those opportunities were there, and they weren’t taken advantage of. But for the Kings Head Coach, it’s the ones that wound up in his own that that hurt more than the ones that didn’t go in offensively.

“It’s the garbage we’re giving up defensively,” he said. “Long chances again, every time we play against this team it’s long chances, a poor pinch, a poor cover and it’s in our net. We chase the game night after night after night.”

Prior to yesterday’s game, McLellan was asked if it was as simple as bearing down on chances against San Jose that would lead to more success, though he flipped the answer around to the other end of the ice, saying that “we’ve also given up goals that we don’t need to be giving up.”

If you go back to the team’s 4-2 loss in this building in late-March, the quotes were similar.

The question now, naturally, is can the Kings adjust to these issues, and can they correct them before the final game against San Jose this season? Or, if they can’t, can they find a way to outscore San Jose. Looking at how the Kings have found success so far this season, the better bet seems to be on the former.

Kings and Sharks, coming up tonight at 7:30!

By Zach Dooley
330 Comments
Behind the Scenes