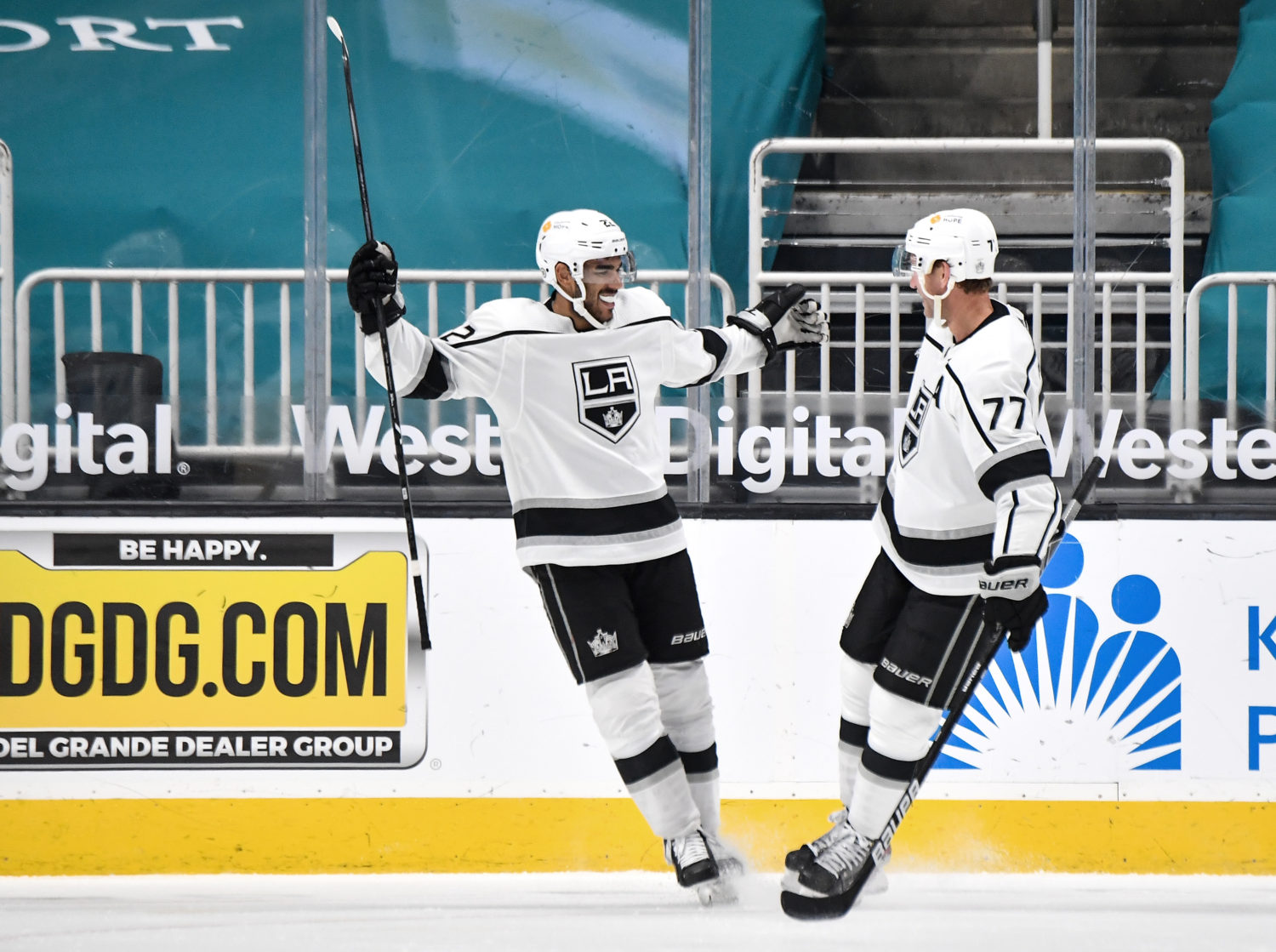 The LA Kings were once again strong in the second game of a two-game set, with a complete effort in a 4-2 victory over the San Jose Sharks on Saturday evening.

Despite trailing in shot attempts and shots on goal early, the Kings scored the game’s first goal, with Jeff Carter tallying for the second time in three games. Mikey Anderson’s shot from the left point was deflected by Andreas Athanasiou and then Martin Jones, with Carter driving the net to put home the rebound from inside the crease.

The Sharks struck back to send the game into the intermission tied, as a puck that Jonathan Quick almost had covered got loose in the crease, with Dylan Gambrell crashing the crease to put home for his second goal in as many nights.

The Kings scored twice in a span of 55 seconds early in the middle stanza, and added a third in final seconds, to take a 4-1 lead through 40 minutes. The Athanasiou-Carter connection struck early, with Athanasiou scoring this time, before Alex Iafallo deked to the backhand for his second goal in as many nights. With less than 10 seconds to play, Dustin Brown made it a three-goal period as he streaked down the right wing and beat Jones high on the short side.

Down by three entering the third, San Jose was able to pull one back, a power-play goal from Timo Meier, off of a secondary opportunity in front of Quick. That was all the Sharks would get though, as the Kings closed the door down the stretch to earn their second win of the season over San Jose, and split the two games at SAP Center this weekend.

Hear from Brown, Athanasiou and Todd McLellan from after tonight’s game.

On his goal, and if he caught Martin Jones cheating on the play
I was actually looking pass and then I fumbled it. I’ve scored a couple of goals on Joner, going short side in that exact fashion, so I just placed it short.

On if felt the team adjusted well to the rush chances he’s been disappointed in versus San Jose prior
Yeah, we were better in that area. In the first period, I think we gave up two outnumbered, ones that weren’t of any significance, one in the second. Last night, against them, we gave up a boatload and it made a big difference in the game tonight. We adjusted and the guys played better in that area.

On if he feels the team has found a method for success, it’s a matter now of doing it consistently
I think that’s fair to say. We’re not perfect, we’re going to make mistakes. I think we have a foundation, or a structure understanding, of what we want to play and what we want to do. We actually talked about it today, an identity I think we have to play towards. If we get away from it and try and run and gun with teams, we get ourselves in trouble. We still need some polish in and around the net, with the number of opportunities we create, all it does is create faceoffs or transition coming back the other way, that’s something that we have to improve on. At this time of the year, we should have all that stuff in place, it’s just a matter of getting it done.

On the situation surrounding the trade deadline this year, as opposed to last
It’s significantly different. Last year, at that point, everybody was on pins and needles. I think it was well known that our management team was going to move some players and try and recoup some assets, continue to retool the organization. This year, we’re in a much more stable situation. You still hear names out there, I don’t know where the hell they come from. Maybe it’s the type of year that we have, some of the bloggers need to write about things, but it’s actually interesting. When you’re on the inside, and you listen to the conversations that management has, and then you go to the outside and the rumors and some of the outsiders that are posting “I heard this and I heard that”, it’s not even remotely close to what’s going on. It’s an interesting year. I understand that we’ve got to create some buzz in the media, have people talked about, it’s that time of year, trade deadline is often exciting. This one’s shaping up maybe to be a boring one.

On if he feels the team is perhaps a certain piece, an internal riser even, away from more consistency
Well that’s a good question, but I can’t give you the answer, because it’s impossible to deduct that. Anytime you add talent, skill and hockey IQ, real good hockey players to your team, you should be getting better. The phase we’re in, the attrition of adding and subtracting, as long as it’s working in our favor for every move we make, we’re going to in the right direction. It might not seem that way on some nights, but the youth that’s coming in with a little more experience should get ahead of some of the ones that have departed. That’s called a rebuild. The top teams in the league are looking for depth right now, at the trade deadline, and they’re trying to add one more good player to make them better. The answer is obviously yes, but I don’t know how much.

– Forwards Andreas Athanasiou, Jeff Carter and Dustin Brown each tallied a goal and an assist in tonight’s game.
– Brown’s goal was a power-play goal, his ninth of the season, tied for fourth most in the NHL
– Forward Alex Iafallo scored for the second consecutive game. His goal was his 15th career point against San Jose, his most against any NHL opponent
– With his eighth assist of the season on the game-opening goal, defenseman Mikey Anderson collected his eighth helper of the season, tied for third most amongst rookie blueliners.
– With his 34th assist of the season, on Iafallo’s goal, forward Anze Kopitar moved into sole possession of fifth in the NHL in helpers on the season.
– Jonathan Quick has now won back-to-back starts with the victory tonight
– The Kings improved to 11-5-2 on the second half of two-game sets on the season.

The Kings are scheduled for a full off day tomorrow and are slated to return to the ice on Monday morning at Toyota Sports Performance Center, in advance of that evening’s game against Vegas.