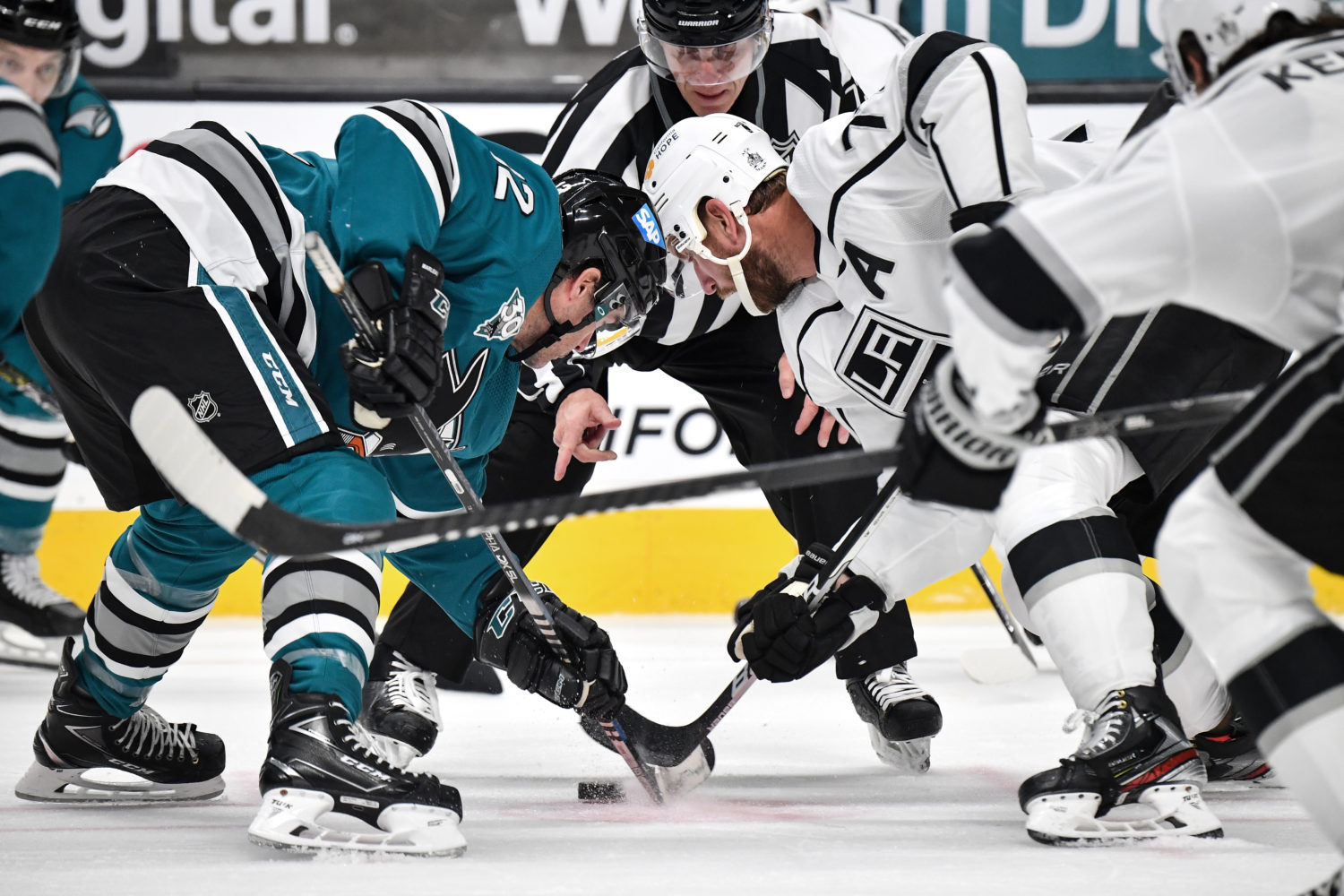 Forward Alex Iafallo opened the scoring tonight with an early goal, as he put the visitors on top just 2:27 into the game. Dustin Brown, working down low off of the right-hand wall, hit Iafallo in front, where he put his shot over Martin Jones for the game-opening goal.

Despite the good start for the Kings, San Jose took over in the back half of the first period, with three goals to close out the opening frame. Kevin Labanc leveled the score, with a wrist shot from the right-hand circle that beat Cal Petersen on the blocker side, before Brent Burns fired a centering pass of Patrick Marleau’s skate and in to make it 2-1. Rudolfs Balcers extended the lead off a rebound late in the first period, to give the hosts a 3-1 game after 20 minutes.

The second period featured two fights and five minor penalties, but no goals. After a slow start, with just one total shot on goal in the first seven minutes, Kurtis MacDermid and Andreas Athanasiou both collected fighting majors as tempers flared in game seven between these teams this season. The Kings had numerous opportunities in the latter half of the middle stanza but were unable to beat Jones.

For the third straight game, the Kings scored early in the third period to cut into their deficit, this coming off the stick of Jaret Anderson-Dolan from a nearly impossible angle, to make it a 3-2 game. Off of Drew Doughty forcing the puck into the corner, Anderson-Dolan fired his shot low, off of Jones’ skate and in, for his sixth tally of the season.

Down by a goal, the Kings earned a late man advantage, but it was San Jose that capitalized, as Dylan Gambrell put home an Evander Kane feed, on a 2-on-0 rush, to put the game away. Tomas Hertl added an empty-net goal for insurance.

Hear from Anze Kopitar and Todd McLellan from after tonight’s game.

On if he was more disappointed in the goals allowed tonight than the chances missed?
Absolutely. I thought coming in here, I was going to get a lot of questions about the breakaways, the power plays, the chances that we didn’t capitalize on, but it’s the garbage we’re giving up defensively. Long chances again, every time we play against this team it’s long chances, a poor pinch, a poor cover and it’s in our net. We chase the game night after night after night.

On what adjustments the team made to tighten up after allowed three in the first
Well, we played with the structure, we didn’t wander from it. We thought we would get enough opportunities to have a chance at winning the game, but we were down by [two] when we made that decision. It’s a little too late.

On focus points heading into the rematch tomorrow
Well, the long chances, but trust me, we focused on those long chances, those rush chances that they’ve gotten against us, for the last five games. At some point, it’s got to settle in, it’s got to sink in, to a number of players that just aren’t getting it right now.

– Forward Anze Kopitar appeared in his 1,112th game tonight, claiming sole possession of second place for most games played in franchise history.
– With his 33rd assist of the season, on the game-opening goal, forward Anze Kopitar moved into a tie for fifth in the NHL in helpers on the season.
– Forward Alex Iafallo scored the game-opening goal, as he became the third Kings player to reach 10 goals scored so far this season.
– With his goal in the third period, forward Jaret Anderson-Dolan has now scored in back-to-back games.
– Defenseman Christian Wolanin made his LA Kings debut this evening, as he logged 15:24 in time on ice, with an even rating and one shot on goal.

The Kings and Sharks face off again tomorrow evening at 7:30 PM at SAP Center. The team is not scheduled to hold a morning skate tomorrow.