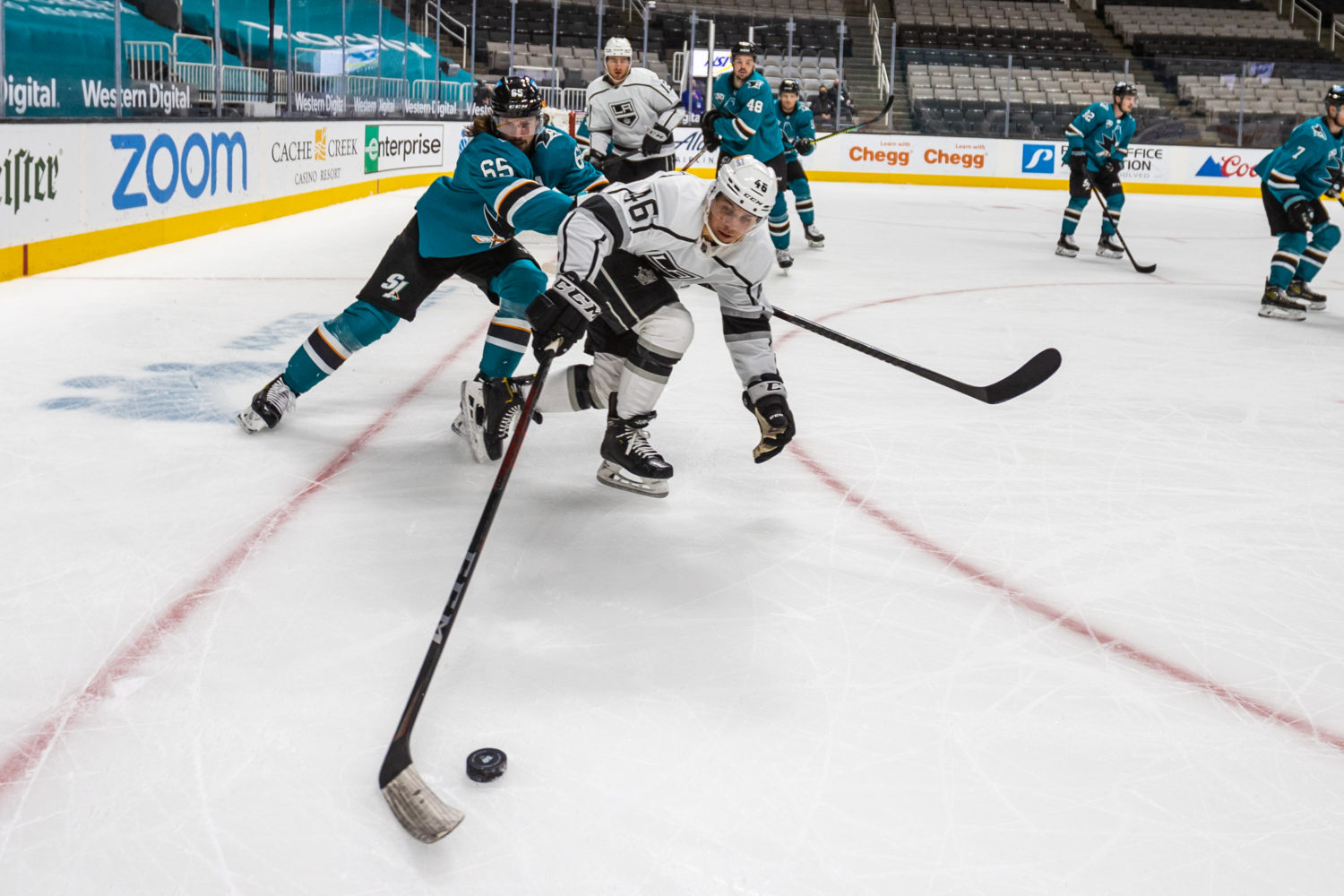 TONIGHT’S MATCHUP: The Kings hit the road for two games in San Jose, tonight and tomorrow, following four straight at STAPLES Center. This weekend marks the final two meetings between the Kings and Sharks this season.

HEAD-TO-HEAD: Forward Dustin Brown (3-3-6) and defenseman Drew Doughty (0-6-6) lead the Kings so far this season in head-to-head action against San Jose, with Brown’s 54 career points his most against any team in the league. In his NHL career, forward Alex Iafallo has tallied 13 points (3-10-13) from 17 games played against San Jose, his second-highest total against any one opponent. San Jose has been led by goaltender Martin Jones, who has started all six head-to-head matchups so far, with a 4-1-1 record, a .932 save percentage and a 2.37 goals-against average. Among the skaters, forwards Evander Kane and Tomas Hertl each have four goals versus the Kings this season, with Kane’s six points leading all San Jose players

KINGS VITALS: Following yesterday’s practice and travel, the Kings hit the ice this morning for an optional morning skate at SAP Center.

With an increased taxi squad on this trip, and multiple players not skating this morning, tonight’s alignment is not known yet at this time. Though, following the victory over Arizona last night out, it wouldn’t be surprising to see the same configuration as we saw on Wednesday, listed below –

The back-to-back this weekend signals that we will see both Kings netminders in one game apiece. The rotation that Todd McLellan has used to date would signal that Cal Petersen gets the nod on night one, following Quick’s victory midweek. Petersen is 1-2-1 against San Jose so far this season, though he’s posted a .918 save percentage and a 2.73 goals-against average.

If there would be a change, it would appear most likely to come on the blueline. McLellan said there’s a chance we could see defenseman Christian Wolanin tonight, who impressed in two games with AHL-Ontario, while Olli Maatta also made the trip to San Jose, as he returns from injury. McLellan said that Maatta is “getting closer” and that we could potentially see him return to the lineup over the weekend. Tobias Bjornfot and Matt Roy will not play tonight.

Up front, Wednesday saw forward Brendan Lemieux make his LA Kings debut, as he skated 12:02 on a line with Austin Wagner and Adrian Kempe. Lemieux’s game came at the expense of his former OHL teammate Gabriel Vilardi, who was a healthy scratch for the first time in his NHL career. Vilardi’s absence gave him the chance to “reset” in the words of his head coach, though McLellan did not commit to potential lineup changes.

More to come on the new, old line combinations below.

SHARKS VITALS: Death, Taxes and Martin Jones in net against the LA Kings.

Jones has started all six Kings – Sharks matchups so far this season, including games played on back-to-back nights. Jones’ stats this season against the Kings, posted above, are impressive, but it’s a part of a career of success versus his former team. Lifetime, Jones is 18-5-3 with a .930 save percentage and a 2.15 goals-against average when facing Los Angeles. Per Curtis Pashelka, of Mercury News,, Jones starts tonight.

Here’s how San Jose lined up last time out, against Anaheim on Tuesday –

What’s Old Is New Again
Out of training camp, way back in January, Andreas Athanasiou opened the season on the left wing with Blake Lizotte at center and Jeff Carter on the right wing. That line stayed together until both Athanasiou and Lizotte entered COVID-protocol, but weren’t reunited until Monday’s third period. Four periods later, they’ve scored two goals.

Carl Grundstrom, Jaret Anderson-Dolan and Trevor Moore were put together as a trio in early February and brought energy to a group that was, at the time, struggling to find wins. They enjoyed a good run together, sandwiched around an injury to Anderson-Dolan, but also found themselves reunited before Monday’s third period after some time apart. Four periods later, they’ve scored two goals.

“Those individuals enjoy playing with each other, we realize that,” McLellan said this morning. “Why did they come apart, if everything was going well, why did we pull them apart? Sometimes, it’s because of the rest of the group around them, sometimes we’ve got to spread them out to augment other lines that are really struggling, or they become stale. Things slow down a bit, they get frustrated, the connectivity isn’t there as much, all of a sudden you’ve got a bit of a line change. Going back to it, it sometimes reignites, reenergizes JAD’s line or Lizzo’s line the other night, I thought they played with some energy. They were excited to be back together, and we’ve got to ride that as long as we can now.”

With the former trio, both Athanasiou (5 PTS) and Carter (6 PTS) had perhaps their most productive stretches of the season in the seven games that trio played together in January. Both players have scored since the reunion, with Lizotte tallying an assist on both plays. Lizotte spoke this morning about the comfort level he has on that line.

“I’m super comfortable with both of those players, those six, seven games early in the year with them,” he said. “Both are great players with great hockey sense, and most importantly, both of them talk on the ice. When players use their mouth and talk to you, it makes it way easier. Carts and AA do a great job of that, so the comfortability is high with them.”

With the latter, their success has been touched on several times throughout the season. Moore, Anderson-Dolan and Grundstrom provide that spark that is sometimes needed, and they seem to do so in their own, unique way. Their forechecking abilities are notable, and they seem to bring out the best in each other’s game, with Moore speaking to their play earlier today.

“I think that we’ve had good chemistry and we’re three guys that want to work on the forecheck,” he said. “I thought that, we’ve talked about it a couple times, that we felt like we kind of got a little lucky, because we were on the ice for some goals against, but we were able to battle back and get some back, which is good. We’re going to definitely try and clean that up tonight, make sure we’re breaking out clean and get to where we’re good in the offensive zone.”

McLellan’s comments indicate that we’ll see both of those units remain intact tonight versus the Sharks.

Pre-Game Quotes
A few additional quotes from McLellan this morning, in advance of facing the Sharks.

On Drew Doughty’s game-management abilities
That’s experience that’s hockey sense, that’s having a good feel for what’s going on in the game. He’s so calm with the puck that he realizes when teams are changing, when they’re not, when we’re changing and we need to rag the puck and hold onto it a little bit longer. He usually knows when linemates are tired or fresh, he knows the time on the clock, he knows who he’s on the ice against. All those game management tools are really important for him, and it rubs off on the other guys. I think, when you get to this point in the season, a lot of mistakes are made due to poor game management. Let’s face it, we don’t have enough time to adjust systems dramatically, especially this year, we play teams…this is what our seventh game, will be our eighth game tomorrow [against San Jose], there aren’t a lot of surprises anymore. Game management becomes a huge tool and Drew has it. He’s able to chat in the room, get guys up, there’s a reason why he’s a winner.

On the power play, and if there’s a specific area he feels has dropped off as of late
I think some of our secondary chances in and around the net. We’ve hit posts and the bounce has gone the other way, we’ve been around the net where the goaltender kicks the rebound out an extra foot past us, that we were getting earlier in the year. We went through some of our power-play looks, obviously preparing for them, and we’ve matched it up with some of the goals against that they’ve given up and really, our chances aren’t differing from other teams that are scoring against them. It’s sometimes where the rebound goes, sometimes we’re off to the side, we’re not always in the eyes, but the other teams are doing that as well. There’s not a dramatic difference. I think our second unit is in flux, I don’t think they’ve found their identity all year. We’ve been hard on them lately, they have to provide some support, it can’t just be the top unit all the time, so we need a little bit more from them. We’re disappointed that we’re not producing, we’re not pulling our hair out over lack of chance creation, it’s just not going in.

On, versus San Jose, if it’s about anything more than just bearing down on chances
You enter the question from the offensive side, but we’ve also given up goals that we don’t need to be giving up. When you’re struggling to score against a team, the last four games have been even-strength games. The play has been distributed at even strength, the scoring has come from there, how about some of the goals we’ve given up. If we think we’re coming into a 5-4 game, I think we’re dreaming. Can we win a game 2-1, can we be solid defensively so that the margin for error offensively isn’t as great as we think it is? Find a way to produce. The other night was a prime example – It’s 3-1, we stuck with it, we scored goals that would be classified as ugly, not pretty, and we’ve got to find a few of those against this team.