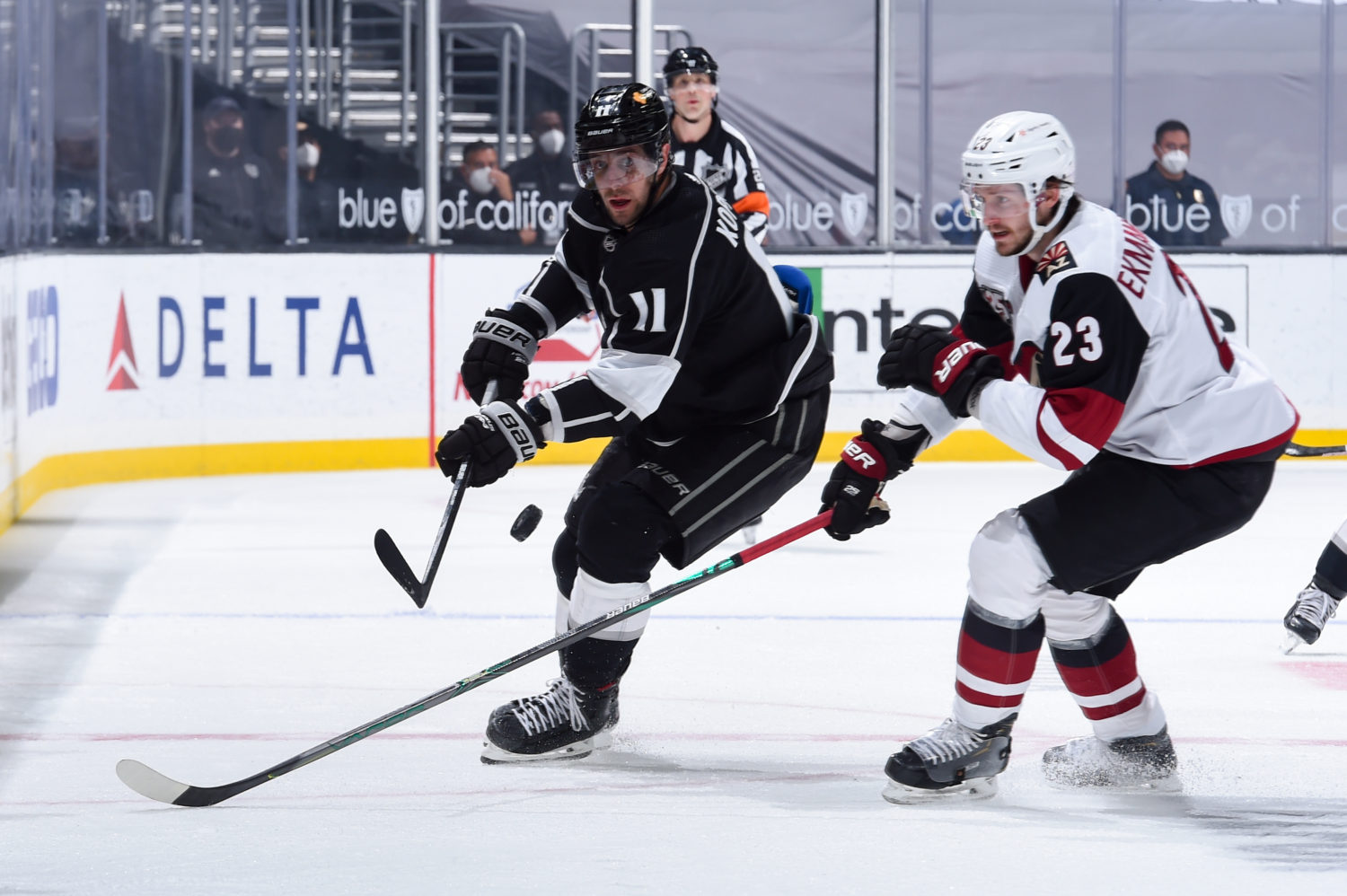 The Kings overturned a two-goal deficit in the third period to earn a 4-3, comeback win over the Arizona Coyotes. In the process, the team snapped a three-game losing streak and earned a split from the two-game set versus Arizona.

The Kings conceded the game’s first goal for the third straight game, and the sixth time in their last seven, as Lawson Crouse put home a rebound in front of Jonathan Quick for the game-opening goal 9:30 in. Arizona doubled their lead just over five minutes later, as Crouse’s shot missed the net from the point, but the puck kicked off the end boards and Ilya Lyubushkn one-timed it from the right-hand circle for his first career NHL goal.

The Kings got one back late in the first, with the Carl Grundstrom – Jaret Anderson-Dolan – Trevor Moore line capitalizing off of a strong offensive-zone shift, as well as Kale Clague activating from the left point. Moving out from behind the net, Moore sent a pass towards the slot that deflected off of an Arizona skate, directly to Anderson-Dolan, who beat Adin Hill to make it a one-goal game.

Coyotes forward Johan Larsson put his team back up by a pair less than six minutes into the second period, as he got a deflection on a Jakob Chychrun shot from the point to beat Quick. The Kings had the advantage in shot attempts and shots on goals in the second period, but were not able to score.

LA scored twice in the opening five minutes of the third period, however, to knot the score at three. First, Clague and Adrian Kempe executed a give-and-go, with the latter converting for his 13th goal of the season just 77 seconds into the third period. Speaking of 77, Jeff Carter then tied the game at three, as he got a deflection on Drew Doughty’s shot from the center point exactly three minutes later.

Traffic was the name of the game on the go-ahead goal as well, as the Kings got a double deflection midway through the third to take their first lead of the evening. It once again stemmed from a Doughty shot from the point, with first Moore, and then Grundstrom, getting a stick on the puck, and Grundstrom getting the game-winning goal.

The Kings were able to hold on down the stretch, and earned themselves what McLellan would deem a character win below.

Hear from Grundstrom, Clague, Kempe and McLellan after today’s game.

On his pass to Adrian Kempe on the 3-on-2 goal
It was just a spur-of-the-moment decision. I knew there was going to be back pressure, and it was just instincts I guess.

On the belief shown by the team in tonight’s comeback win
I think we showed it, we weren’t ready to back down. I’m really happy for everyone, to get back on the winning track. I know we all just want to carry that over into the weekend.

On his perspective on the turning point tonight
I think we did a great job on the kill, that [near] shorthanded goal got us going a little bit. We just played on our toes throughout the third and we had a lot of good o-zone time. We just kept pushing and we got our bounces.

On if there was a particular point where things turned around for him in Ontario, prior to his recall
I think it was a mental battle, but I just stuck with it, kept working in practice. Things started to turn around, I started to get some bounces and once you start getting those little bounces, you can really build off of it and carry momentum. I think that’s what I’ve been doing, and I’ve been trying to do the same thing up here since I’ve been here.

On the momentum a goal early in a period can provide
A goal means a lot, and I think going back in the game, I thought we played a pretty solid game, we’ve been kind of unlucky lately, I feel like. We’re sticking with it, and we created chances and got three in the last period. That was good for a confidence boost for the entire team, I think.

On the turning point tonight for the team
I think we just stuck with it, like I said I thought we had a pretty solid game. Obviously, the PK was playing really well tonight, the 5-on-5 game was strong. When you score a goal, that’s important, and I thought the entire third period from every single line was really good and. We were talking about it before the period as well, and it was nice to get a couple of goals back and get a win.

On his goal, and how that play developed
It was off the kill, and as I said before, we’ve been having a really good penalty kill lately, the D has been clearing out in front of [our goaltenders] a lot. They shot the puck out and just had a lot of time. It was a clear-cut 3-on-2, Claguer made a nice play, back to me and the goalie wasn’t ready for it. Just tried to get it off my stick as quickly as possible.

On Clague’s quick return pass, and the communication on a play like that
Especially when JAD was driving as the far guy, I think for Claguer, it’s either going to be a shot for him, or the pass back. I was ready for it, the pass back, and it was a great play by him, the one-touch back, and it’s hard for the goalies to keep up with that. Really good play by him.

On getting traffic to the front, leading to two goals in the third
It’s always a point of emphasis. We’re struggling scoring goals, you talk about crashing the paint, taking the goalie’s eyes off of it, all of the words that coaches use, but sometimes it’s that high deflection. D-men are looking for sticks when they’re shooting, and they scored off of it as well tonight. Net play is getting harder and harder in the league, it’s hard to control people in and around that area, lots of goals are scored that way. It’s nice to see us get some.

On if he’s been happy with Kale Clague’s game since he rejoined the lineup
Yes, we have. We need really good nights from him right now with guys out of the lineup. Since he’s come back up, he’s played quite well, both offensively and defensively. His sense of where he is on the ice and his reads of when to go and when not to go are much better now then they were when he left, so he’s done some real good things down there.

On if he would call tonight a “character win” for the Kings
I think that’s a good way of putting it. All four lines and six defensemen played some role in it, it wasn’t like one guy scored four and we moved on. To stay with it, especially with the mood around the team lately, it hasn’t been the best, because we haven’t won as much as we’d like to, so we’ve tried to keep guys up. They’ve done a good job of preparing and falling behind wasn’t something we wanted to do, but certainly coming back makes at least this night feel better. It should give us some confidence moving forward.

On Mikey Anderson’s play tonight, and him playing nearly 29 minutes tonight
When you have three of your go-to defensemen out, and you’re in a tight game, you rely on guys to pick up the slack. If it means picking up 4-5 extra minutes then it’s going to be that way. His partner plays nearly 30 minutes every night, so he’s going to have to get used to that moving forward, but he did a tremendous job again, as he does every night.

On how Drew Doughty backed up his comments from Monday with his play tonight
Well that’s called leadership. You put yourself out there with your words and then you follow it up through actions. We’re fortunate to have him and a few others that have been through the big battles here and won eventually. There was a lot of talk over the summer about “where’s Drew’s game”, well Drew’s game is outstanding. You really have to be around him to appreciate the minutes, the locker room, the energy he brings, the work he put in over the summer. He’s as good a defenseman as there is in the National Hockey League right now in my opinion.

– The Kings overturned a two-goal deficit for the second time this season to win in regulation (1/21/21 vs. COL), and the third time to win in total (3/6/21 vs. STL).
– Forward Anze Kopitar appeared in his 1,111th game tonight, tying Dave Taylor for the second-most games played in franchise history.
– Defenseman Kale Clague collected two assists tonight for his first career multi-point game in the NHL. Clague now has three assists from three games played since he was recalled from the AHL’s Ontario Reign earlier this month.
– Defenseman Drew Doughty collected assists on the game-tying and game-winning goals for his eighth multi-point game of the season. Doughty now ranks tied for sixth in the NHL with 30 points on the season.
– Forward Trevor Moore also had a multi-point night with two assists, his second multi-point game of the season.
– Carl Grundstrom scored his third game-winning goal, and fifth goal overall, on the season.
– Defenseman Mikey Anderson set a new NHL career-high in time-on-ice with 28:54.

The Kings are scheduled to return to the ice tomorrow at 11 AM for practice at Toyota Sports Performance Center.