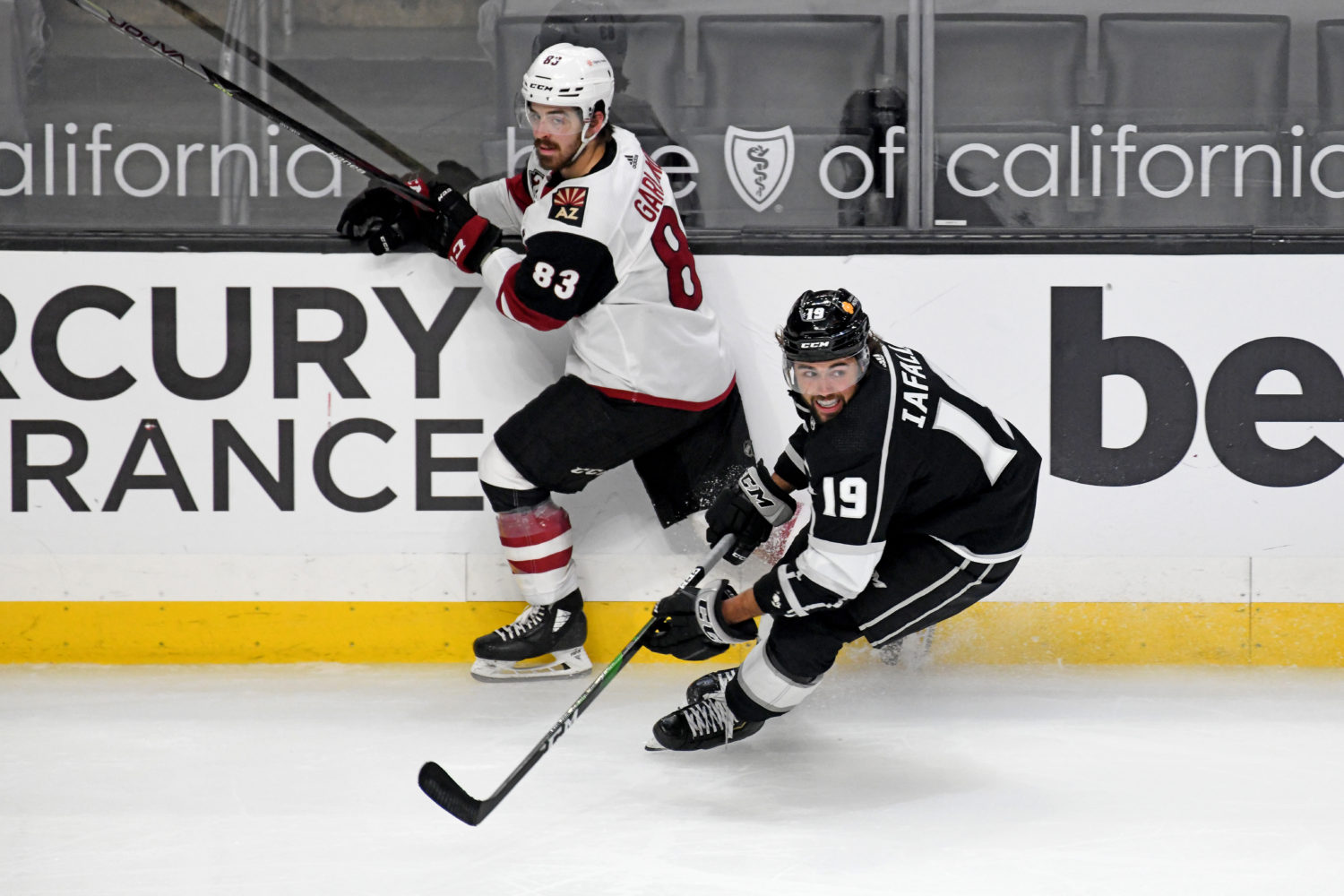 Following last night’s disappointing defeat, the Kings were back on the ice this morning in El Segundo.

A bit of a different look for the group amongst the forwards, aligned below as such –

In the third period last night, Todd McLellan reverted to a pair of forward lines that had some success in the past, putting Carl Grundstrom and Trevor Moore with Jaret Anderson-Dolan at center, and Andreas Athanasiou and Jeff Carter with Blake Lizotte in the middle.

These combinations show that might continue, while also showing that we could expect to see Brendan Lemieux inserted in the lineup in place of forward Gabriel Vilardi. McLellan confirmed last night that Lemieux would enter the lineup tomorrow but did not say in place of who. Still another skate to go before tomorrow’s game, lots can change, so we will see how the team shakes out tomorrow.

With regards to Lemieux, the book on him entering the organization is a player who brings energy, agitation and an ability to get under the skin of his opposition, generating power-play opportunities for his team. McLellan was also complimentary of his skating ability, a key component regardless of your playing style.

“You’ve got to be able to skate, he can do that, he’s a powerful skater, he’s physical, he understands the game within the game, he can back it up,” McLellan said earlier today. “All of those things are valuable tools that he brings to the table. We’re going to ease him into the games, we expect him to have an impact on the games, night in and night out, as he has throughout his career.”

Among the defensemen, the six that played last night skated regularly, while Olli Maatta practiced for the second straight day in a non-contact jersey. Sean Durzi, who has taken warmups with the Kings in the last two games, was assigned back to AHL-Ontario, which hosts Bakersfield tonight at 6 PM.

The Role of Confidence
It’s an interesting thought, the level that confidence or belief plays in the game of hockey.

It’s something discussed externally when the puck isn’t going into the net, as a possible explanation. Speaking earlier today, it is not a notion that McLellan bought into. He discussed how players are always up and down on their own game, but that confidence isn’t really something he thinks you just one day lose and never pick back up.

“This ‘losing your confidence’ thing, I‘ve never bought into that one bit,” McLellan said. “I don’t think you go to the mall and it falls out of your pocket and you’ve lost it. With your game, you’re never in the same spot at any given time, you’re either increasing and feeling better about your game, or you’re giving it back as an individual and as a team. If you let your game slip, and it’s gotten so far down the ladder, that’s on you, you have nobody else to blame but yourself for that.”

He also discussed how he feels that playing within the system, and the structure, that is set up for the Kings is one way that the team can work through those types of issues.

He believes that when the team is playing within the structure, it perhaps picks up those who aren’t playing their best, because it creates trust within the group, and that players can pick each other up. If everyone is doing their job, within the system, the group benefits.

“You can do things right,” he said. “This is when structure is really important because it protects everybody, it gives a player that maybe isn’t performing at a high level a chance to perform at a high level and get back to it. Trust each other, trust the job is going to get done, do your job, get focused on it, bring some energy to the building and play your heart out. That’s all we can ask of them, and if we do that, we’ll be just fine.”

Forward Alex Iafallo seemed to agree with that sentiment.

“We need more believers, I think that’s what I’m trying to get to,” Iafallo said. “We’ve got to keep pushing and keep grinding here. Every game, we’ve got to believe. [We have to] believe in each other and trust each other.”

If Not Confidence, Then……
McLellan was asked for his thoughts on what Drew Doughty said last night, where he believes that perhaps some players are just concerned with being in the lineup. Doughty’s full comment below –

“Compete, act like you’ve earned your spot in this lineup and on your team and run with it. Don’t sit around, hoping you’re going to get more shifts. Take your chance and run with it. I think some guys are just worried about being in the lineup, and I understand that, but at the same time, we need our second and third core guys, along with our top core guys, to all set up right now. Play as if it’s a playoff series, every single series we play in, and that’s it. I don’t know what else to say.”

McLellan admitted that may be the case with certain players.

“That may be happening, there may be that part of it,” he said. “That being said, if you’re that deeply concerned about it, there’s probably something wrong with your game. If you’re comfortable in your own skin, and you’ve been here all year, you should be just fine.”

From that point on, however, he believes that it’s about taking your chances, and your second chances, and being accountable for them on the ice. Bad nights are going to happen for every individual, and they’re likely to happen more often than not with young players looking to establish consistency in their game.

In McLellan’s mind, it’s about how a player responds to the opportunities they are given. When they make a mistake, or have a bad game, how do they respond the next day?

“There’s ups and downs, there’s going to be nights where it doesn’t go your way, you’re going to be held accountable for it, but you put the skates back on, you go out and try and do it again,” he continued. “We’ve always given players multiple opportunities to make good on bad nights and bad situations, and a lot of them have done it and they’ve improved. There’s no reason to be that fragile, I’ll tell you that.”

Kale Of Duty
Lastly, hear from defenseman Kale Clague from earlier on today.

Clague collected an assist last night, the primary helper on Andreas Athanasiou’s goal, as he activated down the left-wing boards and hit Athanasiou’s stick in front for a redirected goal. The 22-year-old blueliner talks about stepping back into a team that’s been struggling to find wins, as well as playing his own game offensively, being bumped up in the lineup yesterday to take shifts with Drew Doughty and the thought process behind making certain reads and activating into the play.

By Zach Dooley
64 Comments
Behind the Scenes

Practice 11/26 – New Lines & Rationale, Practice Focus and Andersson plus an update on #DoughtyWatch

Happy Friday, Insiders! The Kings were back on the ice this morning, fresh out of the Thanksgiving holiday, with the Ottawa

By Zach Dooley
504 Comments
Behind the Scenes