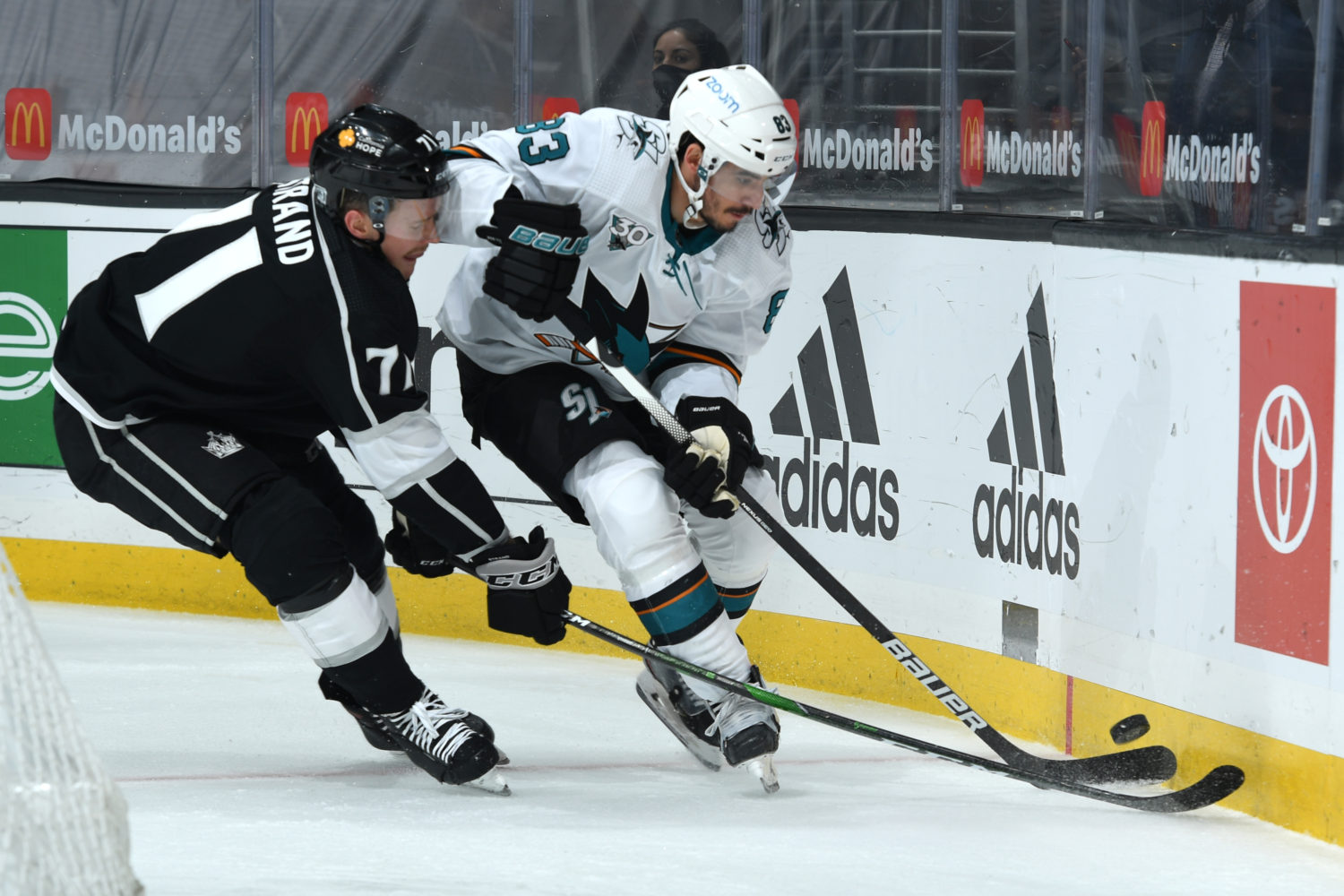 TONIGHT’S MATCHUP: The Kings are back home to host the San Jose Sharks this evening, the first of two games this weekend against their opponents from Northern California.

HEAD-TO-HEAD: The Kings and Sharks enter tonight’s game level on points in the West Division, with the Kings holding one game in hand over San Jose. In terms of individual scoring, defenseman Drew Doughty leads all skaters with six assists from four games played, while the forward line of Alex Iafallo – Anze Kopitar – Dustin Brown have each contributed two goals in head-to-head play. On the San Jose side, forwards Evander Kane (3-1-4) and Logan Couture (2-2-4) lead their team with four points versus the Kings, while forward Tomas Hertl has three goals from four games played.

KINGS VITALS: The Kings hit the ice this morning for an optional morning skate at Toyota Sports Performance Center in El Segundo.

Todd McLellan indicated that Kurtis MacDermid will likely check back in, with Bjornfot unlikely to play. McLellan pointed out certain things in MacDermid’s game that he wants his defenseman to focus on tonight, and in any game really.

“Dermy has a specific role to play,” McLellan explained. “He’s physical, he’s got to be positional. Granted, we don’t look for a lot of offense from him, but he does have a good shot, he’s been able to use it a few times, but the majority of it will come from defending and being positionally sound, understanding his range and how to use it. Whether he comes back into the lineup, or he plays every day, that’s part of his recipe, and he’s got to follow that on a nightly basis. For the most part, he does.”

McLellan also indicated that his forward lines would likely stay the same from what we saw on Wednesday in Vegas. He has talked at length about a desire to find consistency beyond the Kopitar line, and feels that he got strong efforts from many in that group at T-Mobile Arena two nights ago.

“Coming off a win, we like to keep what we have,” McLellan said. “I thought the fourth line in particular, Lizotte’s line, played a real solid game in Vegas, it was an unbalanced night, Vegas was short a player, so their level of competition likely went up with one of their top 3 often occupying that spot, so I thought they did a good job defensively. I think Trevor Moore’s given Gabe Vilardi’s line a little balance, when it comes to playing defensive and checking. The wild card for us is really JAD’s line, and the other night it produced with [two goals] and some real good chances. If we can keep that up, and have all four lines producing at both ends of the rink, then we have a chance.”

With that in mind, we could see something like this –

Perhaps the only question mark for the team is who starts in goal. McLellan confirmed that he plans to continue sharing the net between Cal Petersen and Jonathan Quick, considering the number of games that the team has coming up and the short number of days they have off.

With the back-to-back set this weekend, the expectation is that both goaltenders will play one game versus the Sharks.

“We’ve [rode a hot goaltender] in small portions during the year,” McLellan said. “Sometimes our hand was forced due to injury or illness or COVID. Yes, we would like to get into that situation, but when you look at the number of games we play, I’ve said it all along, both of them are going to be, and are, important, and will continue to be important.”

SHARKS VITALS: Goaltender Martin Jones has started all four of his team’s games against the Kings this season, with San Jose winning three of those four contests. In his NHL career, versus his former team, Jones has a 16-5-3 lifetime record, along with a .927 save percentage and a 2.25 goals against average. Jones has more wins versus the Kings than any other opponent and, ironically enough, his save percentage is his best versus any opponent besides San Jose.

Per Curtis Pashelka of Mercury News, Jones is expected to start the front-half of the back-to-back tonight at STAPLES Center. A projected San Jose lineup below –

Dylan Gambrell is a question mark tonight for the Sharks, though he is expected to play. If he doesn’t, expect Antti Suomela to check in.

Four-Point Nights
Considering the placement of both teams in the West Division standings, tied for sixth, four points out of a playoff spot, the team in black and the team in white will likely have the same mindset entering tonight’s action. Beat the teams around you to separate yourself from the pack.

Considering the unique schedule this season, and the challenge facing the Kings, all games are important, though when you factor in where San Jose sits, games like tonight feel like four-point games. Then again, from McLellan’s perspective, every game has that feeling at this stage in the season.

“I think that’s fair to say, but it’s going to sound very cliché-ish, but they’re all important,” McLellan said. “It doesn’t matter whether the team is next to you in the standings or not, when you’re in an eight-team division, and four are going to make it, every night is a four-point game. When we play against a team like Vegas, to come out of the road trip and basically play .500, I don’t think it affects them a lot in the standings, but it sure does for us. Important for us to approach every game like that.”

The Kings have a slew of home games upcoming, 11 of their next 15, and 14 of 22 to close out the season, as well as 14 of 22 games against Anaheim, Arizona and San Jose, the teams in fifth, seventh and eighth in the standings.

More on the breakdown of upcoming games here.

McLellan also touched on the fact that it feels like the Kings are playing “playoff hockey” right now, and have been for the last few weeks. Each game is important, each game is meaningful, and that message has been shared by the players on the ice as well.

“Intensity, every little shift counts, every puck out of the zone counts, and I think the intensity between both sides ramps up and there’s a little more animosity between guys,” forward Blake Lizotte said. “The compete level definitely goes up, and right now we’re in a situation where it is playoff hockey, and what more could you want? A chance to potentially push for a playoff spot is something every team wants and we’re in a position to do that right now.”

Fourth-Line Fury
McLellan praised his fourth line as a whole, and the individuals on it, both after Wednesday’s win over Vegas and earlier today.

The line got a hard-working goal from forward Lias Andersson, who knocked home a rebound after a shot from the point, with linemates Austin Wagner and Blake Lizotte both also factoring in on the play.

“It was good to play with both of those two guys, they’ve got a lot of speed and think the game fast out there,” Andersson said on Monday. “Our gameplan was to get the puck deep and work them, get to the net and create some offense early on. I think we did a good job of that. Obviously, we had a lot of chances, maybe should have scored a couple more, but a good, solid game for our line.”

Andersson was the new add on that unit. Lizotte and Wagner have skated together in the past on several occasions. Since Lizotte entered the NHL, he has skated more with Wagner than any other player, and when the two are on the ice together, they control more than 57% of the shot attempts, shots on goal, and high-danger opportunities.

Lizotte had good things to say about his linemate earlier today, complimenting the obvious – his skating ability – and also discussing how their styles of play blend together effectively.

“His tenacity, both my style of play and his style of play is tenacious, and I think we feed off of each other,” Lizotte said. “I think that it works really well for us.”

It’s one thing to do it once, and it’s another to do it consistently. It appears as if that line will get another opportunity tonight to show that they deserve to continue to play, and we’ll see how they shake out against San Jose.

Lastly, hear from defenseman Austin Strand from earlier this morning.

Strand is now in his second callup to the Kings, after he played an effective seven NHL games earlier this season. Strand talks about playing with the right-handed Sean Walker on a defensive pairing, and the differences that it brings, as well as the noticeable improvements of the Ontario Reign from when he was first assigned to when he most recently left, as well as the communication he’s received from the coaching staff so far this season.

Kings and Sharks, tonight at 7 PM at STAPLES Center!

By Zach Dooley
83 Comments
Behind the Scenes