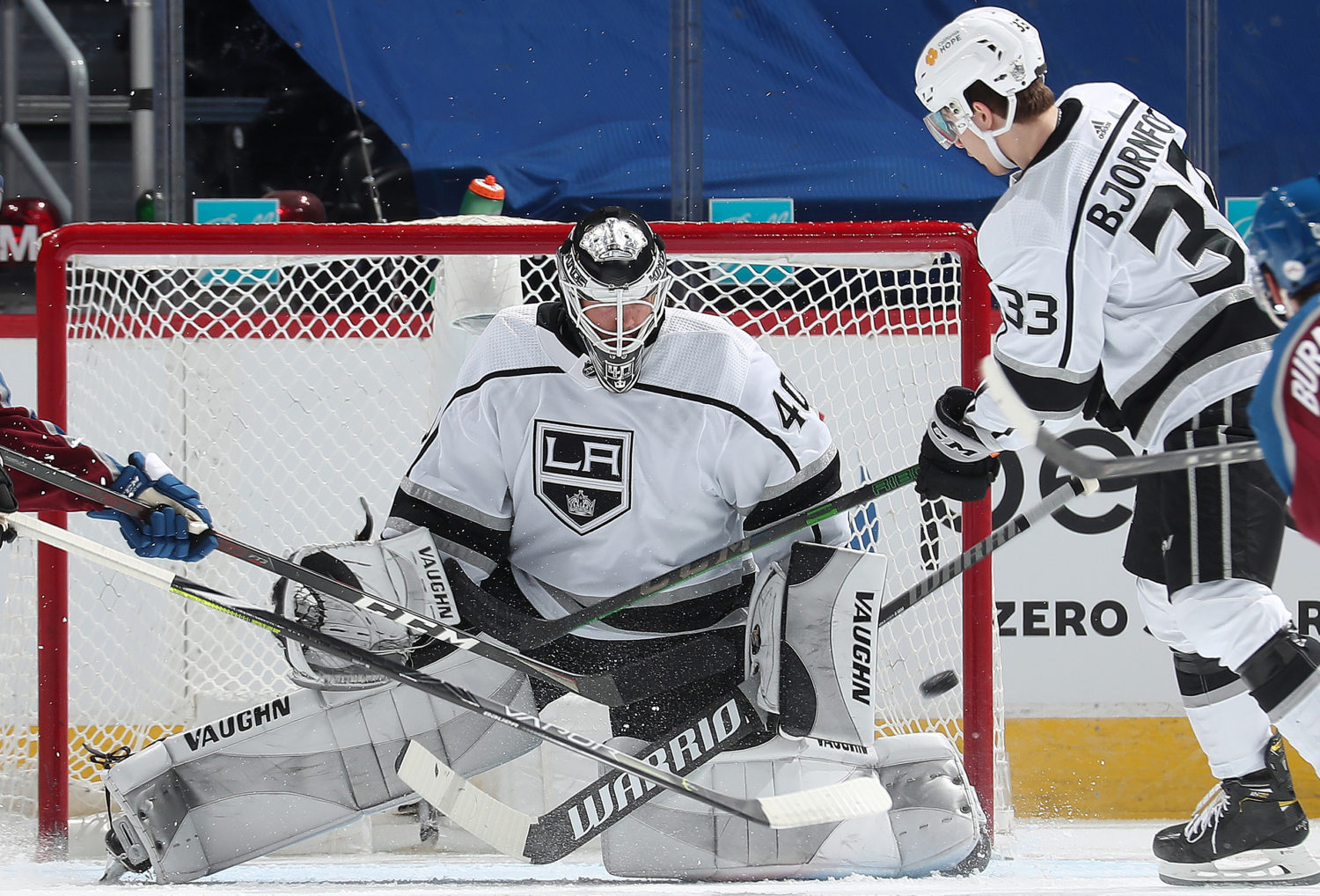 The Kings hit the ice today for their lone practice day of a 3-in-4 set, following last night’s win in Vegas and preceding the back-to-back versus San Jose, coming up this weekend.

A few notes, and quotes from Cal Petersen, Andreas Athanasiou and Todd McLellan below –

Injury Updates & Roster Moves
Defenseman Tobias Bjornfot left last night’s game late in the second period, following an elbow to the head from Vegas forward Chandler Stephenson. Stephenson received a five-minute major for elbowing, and a game misconduct, and was suspended for three games earlier today, following his hearing with the NHL’s Department of Player Safety.

On the ice, however, was forward Martin Frk, who skated in a full jersey for the first time since he was injured in Vegas back in early-February. Frk suffered a groin injury during the Black-White scrimmage during training camp, worked his way all the back into the lineup, but re-injured the same area in his season debut, sidelining him ever since.

Frk will not play for the Kings this weekend against San Jose, and McLellan offered the following on his status moving forward.

“He needs a lot of practice time, it’s been a long, long road back for him,” McLellan said. “I give him credit for working hard, I think I mentioned that the other day on the call, but with that being said, he needs some practice time and getting that is hard. Because of all the games we play, we’re so short when it comes to actual practice, that he’s going to work hard to get himself back to where he needs to be.”

Lastly, as reported earlier this morning, the Kings have placed forward Matt Luff on waivers. More on Luff’s status will be known tomorrow at 9 AM Pacific.

Breaking In Bally
The Kings have several broadcast schedule changes upcoming, some in channel-form and some in name-form.

This weekend’s games will be the first to be branded with the “Bally Sports West” seal, following the switch in branding from Fox Sports West to Bally Sports West, which was announced earlier this year. Expect to see perhaps a slightly different look and feel to the games this weekend, considering the changes, with Friday being broadcast on KCOP Channel 13, and Saturday on BSW.

The Kings recently made several changes on the broadcast front, with many games moving to KCOP Channel 13, as a result of the now Bally family having four teams playing at the same time. Here’s the full breakdown of where you can find Kings games for the rest of the season.

Welcome Back, Stutts!
Hockey Canada today announced the pool of players and staff that will represent their nation at the IIHF World U-18 Championship in Frisco, TX later this month and included amongst the coaches was former Ontario Reign Head Coach Mike Stothers, who will serve as one of the team’s assistant coaches.

The man everyone calls Stutts was a part of the Kings organization for six seasons, first as the Head Coach of the Manchester Monarchs, and then for five additional seasons with the Ontario Reign. Stothers won a Calder Cup in 2015, and guided Ontario to three playoff appearances in the Pacific Division.

Good to see a good man get back behind the bench, though his trademark post-game quotes will be missed as an assistant, likely by everyone except for him.

On if his approach at all changes, being in his first NHL playoff race
No, not really, I mean I think that I’ve played in games like this before and I don’t think anything changes, mindset doesn’t change. I think we were playing important games at the end of last year too, regardless of where we were in the standings, we were making a push and I think it’s the same mentality this time around. Day-by-day, game-by-game.

On the growth he’s seen in his communication with his defensemen, and his puck handling
I think it’s something that’s grown with each game. I think it all starts with being more direct, trying to be harder, make more direct plays, and I think the defensemen are trying to make more direct calls. I think, just the level of confidence that we’ve grown with each game, knowing where each other is, being able to assert ourselves, I think that’s helped a lot, and I think that’s helped the D as they get more comfortable too, wanting the puck and knowing what to do when they get it.

On the importance to him as a goaltender of the Kings scoring first, and playing with a lead
It’s huge, not only for me but for the rest of the guys. I think, in a way, it takes a little bit of the weight off our shoulders, especially when we can add to that. I think playing with the lead is something that we do a pretty good job of, and that first goal, as you can see throughout the season, has been really important for us. Guys can kind of relax, have a little bit more confidence on the offensive side. I think it helps a ton.

On being one of the guys in the room who has played playoff games, and been a part of a playoff push
I think everyone’s been in a position where they’re fighting for a playoff spot at one point in their career, whether it’s in the National League, or in the minors or in juniors. Obviously, every game is so important right now, especially with the condensed season, so every game is so important. I think we all know that, so it’s just taking it one game at a time, one shift at a time, and really just making sure that we’re giving it everything we have.

On if he pays any attention to the upcoming trade deadline, being on a one-year deal
I mean, I don’t think about it at all. Just focused on helping this team win, we’ve got a good team here with a lot of capabilities. If we just keep pushing, we’re right there, so it’s just kind of getting in that groove and getting hot at the right time. I don’t really worry about that, I just focus on the next game and that’s it.

On the fit he feels he’s found in Los Angeles, after signing late in the offseason
Yeah, I’m definitely happy, I feel like I found a really good spot here. All the boys are good, like I said we have such a good team here, and there’s so much to look forward to. I’m super happy to be a part of it, I’m looking forward to the future and these next stretch of games, hopefully we can get on a little run here.

Today, we use Todd McLellan’s video. A long interview with McLellan, and didn’t want to leave anything out.

More to come a bit later on today, with a look at the Kings’ upcoming schedule.

By Zach Dooley
62 Comments
Behind the Scenes

Practice 11/26 – New Lines & Rationale, Practice Focus and Andersson plus an update on #DoughtyWatch

Happy Friday, Insiders! The Kings were back on the ice this morning, fresh out of the Thanksgiving holiday, with the Ottawa

By Zach Dooley
504 Comments
Behind the Scenes