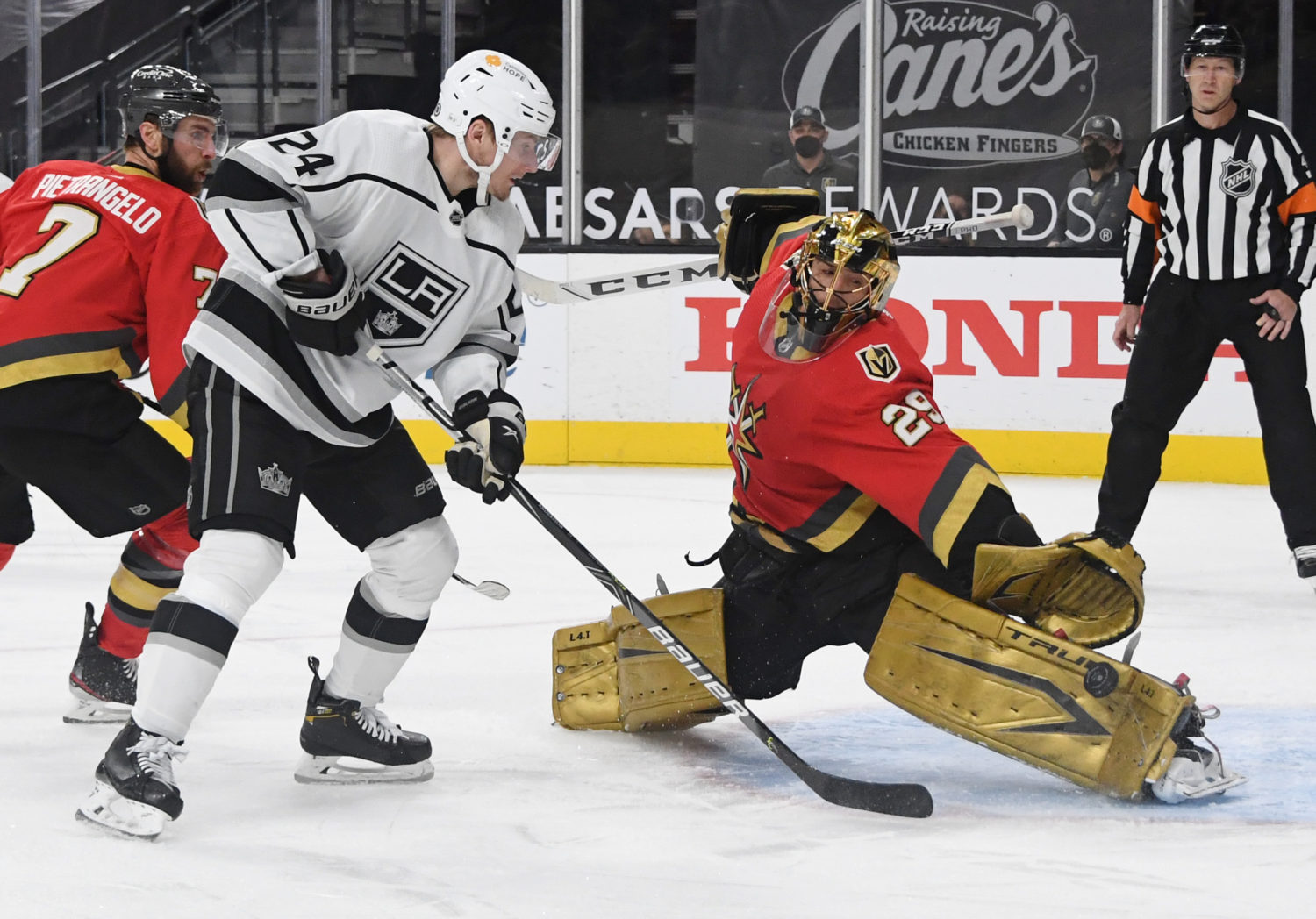 There are few teams in the NHL better in their own building than the Vegas Golden Knights.

At 14-2-1 entering last night’s action, the Golden Knights had dropped points in just three of 17 games at T-Mobile Arena, with three of those 14 wins coming against the Kings. Wednesday’s 4-2 victory for the Kings does nothing to change how good Vegas is at home – they’re still extremely good – but it does prove something for the Kings, to earn a split in a building where splits are hard to come by, and series victories have been nearly impossible, with no teams accomplishing the feat this season.

By winning on Wednesday, the Kings avoided being swept at Vegas on the season. They earned two points in regulation that only two other teams – Colorado and Anaheim – have earned so far this season. The two points were valuable by any stretch really, as the Kings moved back to the .500 line on the season and pulled to within four points of the St. Louis Blues for the final postseason berth in the division, with a game in hand.

“We’re there,” Todd McLellan said after Wednesday’s win. “We’re right there with the rest of the pack. I think it’s a race to one position for a lot of teams, I’m not sure that anyone is going to catch Minnesota, Colorado or Vegas, the way they’re playing, so it’s a race for one position. We’re there with a bunch of teams, every night is important.”

We’ll get to the rest of that McLellan quote in a bit, because there’s an additional important element to break down. First though, we’ll take a look at the games themselves.

The two games in Vegas started off in nearly identical fashion – on the front foot.

The Kings, who have conceded the first goal in 66% of their games entering the week, scored first, and scored early. Exactly one minute into Monday’s game, the Kings led 1-0, with their game-opening goal on Wednesday coming just 58 seconds later.

From that point on, it was a story of two different games. The most frustrating part of Monday’s game was that the Kings followed up their early goal with some really good hockey, but they were unable to convert on some early opportunities, which included a great look for Jeff Carter, and an early power-play where the top unit had possession of the puck for the full two minutes but could not score.

Vegas then followed up with four unanswered goals, and it felt a story all too familiar in that building, with the Golden Knights capitalizing on Kings mistakes, and putting them into the back of the net.

Monday, however, was different. The Kings, a team that has struggled to find consistent scoring at 5-on-5, got a hardworking goal from Lias Anderson, playing in his first NHL game in more than six weeks, to double the lead after the first period.

Even after allowing a goal, it was the Kings that punished the Golden Knights for their mistakes, taking advantage of perhaps two misplays from one of the NHL’s best goaltenders in Marc-Andre Fleury, and making them pay with goals from Jaret Anderson-Dolan and Alex Iafallo. While the Kings failed to take advantage of ample power-play time in the game’s final 22 minutes, they nonetheless held on for a 4-2 win.

Beyond just his goal, Andreas Athanasiou was moving about as well as we’ve seen from a player all season. His legs created Anderson-Dolan’s goal, and also drew a late penalty that resulted in, frankly, two minutes that Vegas wasn’t able to attack for, which helped to close out the game. At times, the Kings have been a top-heavy team in terms of offensive output, with the line of Iafallo, Anze Kopitar and Dustin Brown leading the way. Iafallo did score on Wednesday, but it wasn’t the one-line band. It was a group effort.

Not to be left out of the party was a new-look fourth line, that not only got a goal but provided energy consistently throughout the game. McLellan said repeatedly over the last few days that he’s still searching for the right combination of players behind that Kopitar line, to provide a more consistent game at both ends of the ice. Andersson, Blake Lizotte and Austin Wagner put on a pretty convincing performance as to why they should get another game together.

“I thought that line had a bit of a spark, which was good for our team tonight,” McLellan said. “[The Golden Knights] were short a player, and then when Chandler took the major they were short two, so I think us having a fourth line that could give us some minutes was valuable.”

Let’s return to the second half of McLellan’s quote from earlier.

“It’s important for the evolution of our organization, but it’s also important point-wise, for us to play well to put ourselves in a position to play later than the regular schedule.”

Whether you believe the Kings are a legitimate contender to get that fourth playoff spot in the West Division or not – and judging by the Insider comment section, there’s a pretty distinct split in viewpoints there – these games are important nonetheless.

From a here and now perspective the importance is obvious because as it stands currently, the Kings sit just a stone’s throw outside of that final spot, with 11 of their next 15 games coming on home ice at STAPLES Center, and the next six coming against Arizona and San Jose, the teams directly in front of and behind them, respectively, in the standings.

That’s only half of the picture though. When the Kings were on their six-game winning streak earlier this season, I asked McLellan what was alike and different between that run, and the seven-game winning streak at the end of last year. It stood out to me at the time that he highlighted the competitive atmosphere surrounding both runs.

Last season, those seven wins came with the team well on the outside of the playoff picture. They were low-pressure games, with many young players breaking into the lineup for late-season looks. This season’s streak was early in the season, with every game incredibly important. And that’s what makes these upcoming games also incredibly important. Mikey Anderson has never played competitive NHL games down the stretch. Neither has Gabriel Vilardi. Or Tobias Bjornfot. Or Jaret Anderson-Dolan. And, even if you don’t see the Kings as being ready just yet, these games are important in the development paths for those young players, and so many others, who haven’t played them yet at this level.

In the short term, it’s the placement that makes these games important, and they are, one game at a time. In the long term, these games have importance as well. When it’s time for the Kings to take that next step as a franchise, these important games down the stretch will help to lay the foundation towards building back towards the level where last night’s opponent currently resides.