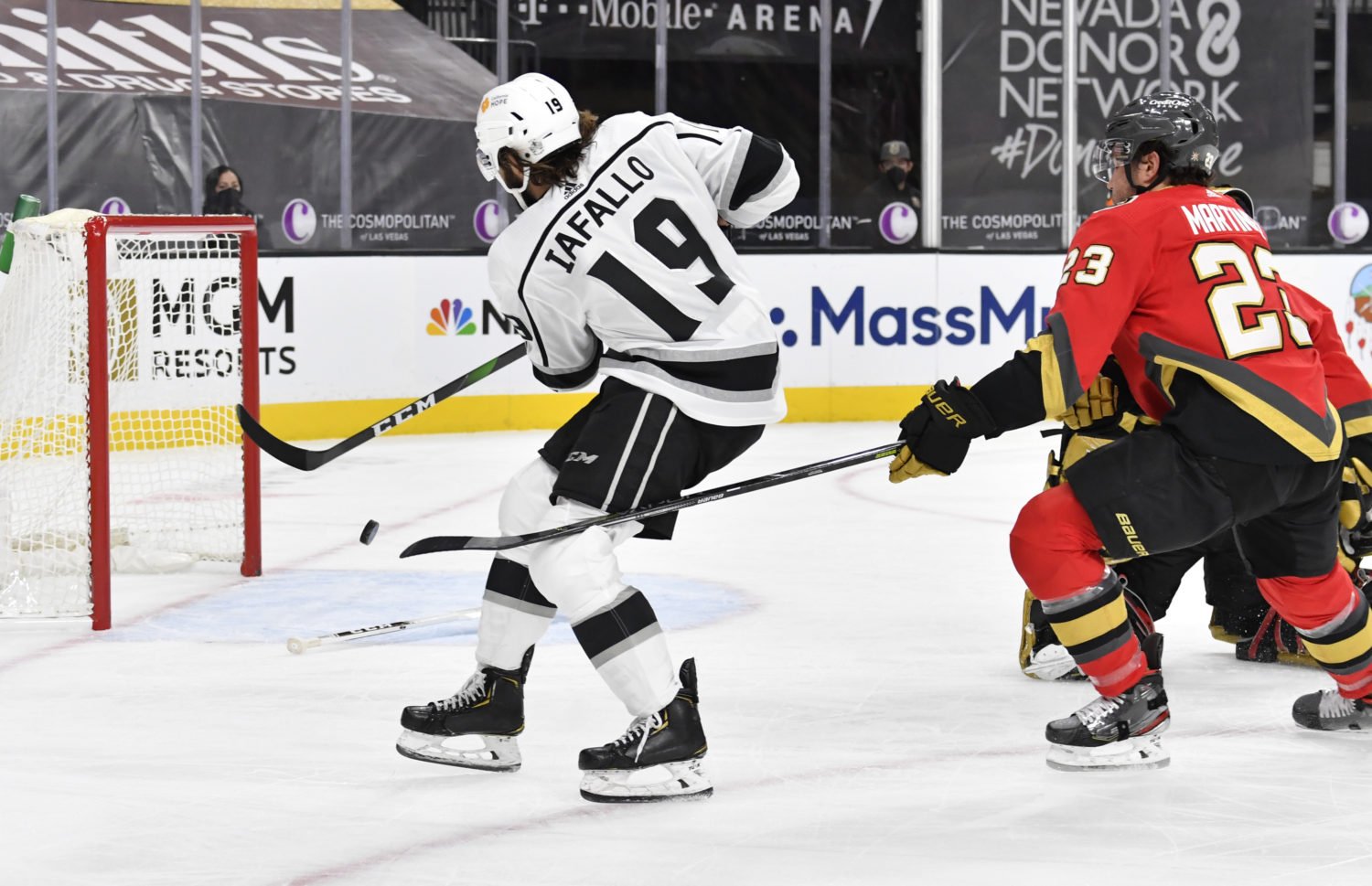 The Kings got scoring from throughout the lineup, and bounced back in a big way, with a 4-2 victory over the Vegas Golden Knights on Wednesday evening at T-Mobile Arena.

It was nearly déjà vu for the Kings, as they scored inside two minutes in for the second straight game. Sean Walker hit Andreas Athanasiou for a breakaway, and the winger did not miss, as he deked onto the backhand and beat goaltender Marc-Andre Fleury for the early Kings lead.

Unlike Monday, when Vegas struck back for four unanswered goals, the Kings doubled their lead in tonight’s opening period.

Forward Lias Andersson earned his way back into the lineup this evening, for the first time since February 16, and scored a big goal to extend the lead late in the first period. After a strong shift from the fourth line, defenseman Tobias Bjornfot’s shot from the left point was deflected in front, in behind Fleury, and Andersson crashed the net and hit home the rebound for the 2-0 lead through 40 minutes.

While Vegas opened the scoring in the second, with William Karlsson burying after a tough bounce off a skate in the slot, the Kings struck back with two more goals, to take a 4-1 lead through 40 minutes.

First, Athanasiou used his speed to win a race to a loose puck in the offensive end, and his shot forced Fleury into an awkward save, with Jaret Anderson-Dolan crashing the net and putting the rebound just over the goal line. Immediately after a penalty killed, forward Alex Iafallo found a loose puck in the slot, alone with Fleury, and evaded the netminder’s poke check, putting home his deke on the forehand for a 4-1 advantage.

After the Kings were unable to convert on a five-minute power play, after a major penalty for elbowing was assessed to Chandler Stephenson, Vegas pulled one back early in the third, as Shea Theodore’s drive from the point evaded a lot of traffic in front, beating Petersen at the left post.

Despite a Vegas push down the stretch, Cal Petersen and the Kings held firm, to close out the victory and earn a split in Vegas this week. The win was the first of the season for LA at T-Mobile Arena, and snapped a three-game losing skid in the process, while moved the team back to the .500 mark on the season with the victory.

On if it feels like the Kings are playing “playoff” games right now, with 22 games left
Yeah, with 30 [games] left it was. We’re there. We’re right there with the rest of the pack. I think it’s a race to one position for a lot of team, I’m not sure that anyone is going to catch Minnesota, Colorado or Vegas, the way they’re playing, so it’s a race for one position. We’re there with a bunch of teams, every night is important. It’s important for the evolution of our organization, but it’s also important point-wise, for us to play well to put ourselves in a position to play later than the regular schedule.

On the importance of depth scoring tonight
I think you just answered your own question, absolutely.

On Lias Anderson tonight, and the play of his line
Let’s start with Lias, I thought Lias did a really good job. He came to a new team, he played some games, he was in and out, he didn’t get to play a lot and we asked him to go to the minors just to get his game polished up and get some game action. He did that, he was very patient, every day he showed up at the rink and I don’t know how many times he walked by me and said “I’m ready” and he was. When his number was called, he was ready, good for him. I thought that line had a bit of a spark, which was good for our team tonight. [The Golden Knights] were short a player, and then when Chandler took the major they were short two, so I think us having a fourth line that could give us some minutes was valuable.

On the importance of finding two points in this building
I think yes, the answer quite simply is yes, but it’s tough to win here. One of the toughest arenas to win in, in the National Hockey League, and for us to get a win, we put it in the bank, it gives us two points that I don’t think a lot of teams are going to get out of this building. That certainly helps. We’re happy with the win, get some rest, and continue to play, because the games are coming fast.

On the Kings strong record in the second half of two-game sets this season
Well, the urgency, the fact that we can make some adjustments and fix some things from the game before. Leadership, conditioning, I think that’s an important part, we’ve got a well-conditioned team I believe, those are all factors I think that go into that second game.

– Forward Andreas Athanasiou collected a goal and an assist in tonight’s game, his first multi-point game of the season.
– Skating in his first game with the Kings since 2/16, forward Lias Andersson tallied his second goal of the season.
– Forward Anze Kopitar snapped a three-game pointless drought, his longest of the season, with an assist on Alex Iafallo’s second-period goal. The assist was his 30th of the season, fifth most in the NHL.
– With his primary assist on Iafallo’s goal, defenseman Mikey Anderson now ranks third in the NHL with seven assists amongst first-year defensemen
– Defenseman Sean Walker collected his third point from four games against Vegas this season with the lone assist on Athanasiou’s game-opening goal.
– Goaltender Cal Petersen made 39 saves on 41 shots this evening, as he improved to 4-1-0 against Vegas in his NHL career.
– The Kings were perfect on the penalty kill for the ninth time in ten games, as they killed off all three Vegas power-play opportunities. The Kings rank fourth in the NHL at 85.7% on the PK this season.

The Kings are scheduled to practice tomorrow at 11 AM at Toyota Sports Performance Center.