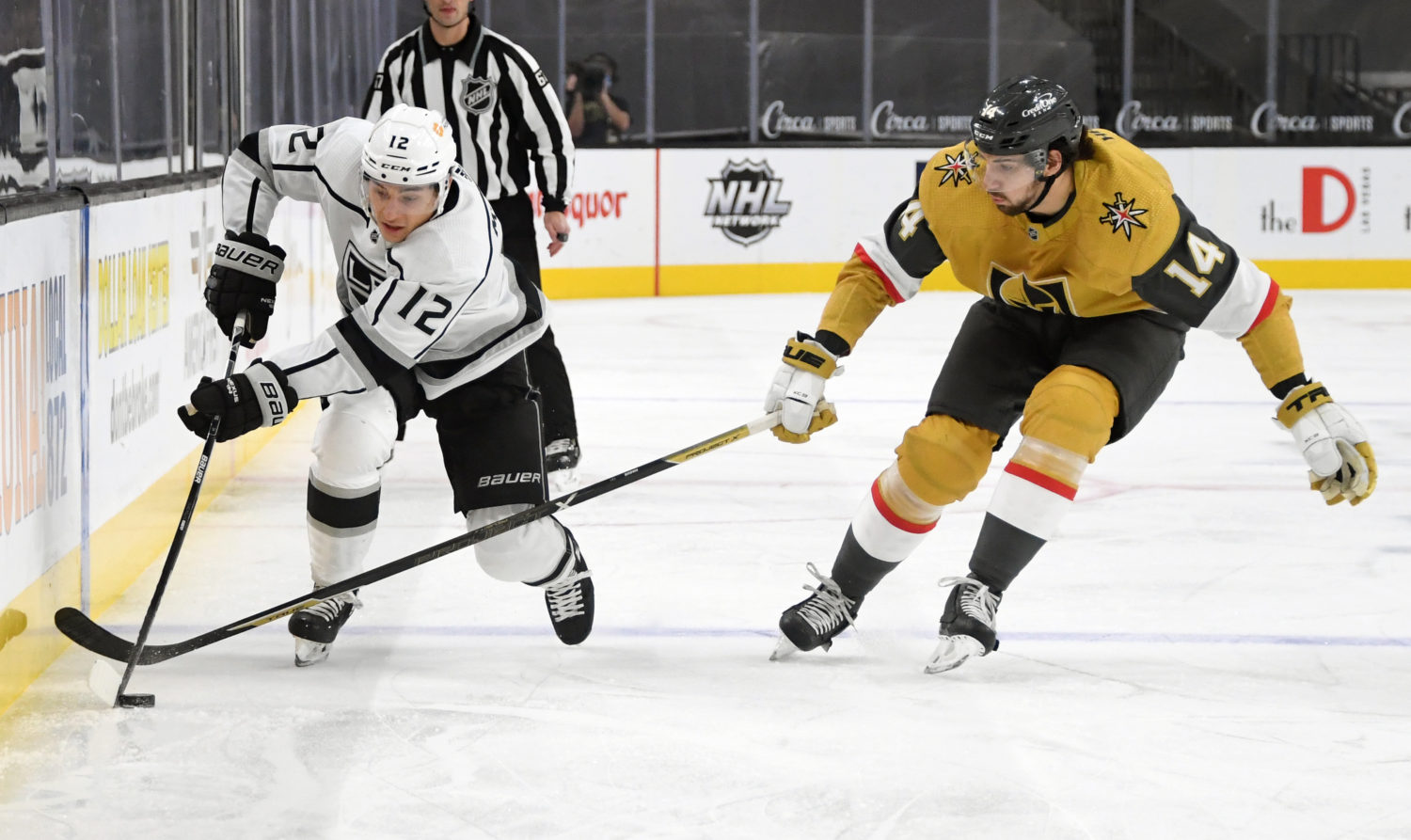 TONIGHT’S MATCHUP: The Kings look for their first victory of the season at T-Mobile Arena, in their final game, as they conclude a two-game set against the Vegas Golden Knights this evening.

HEAD-TO-HEAD: The Kings have been led by goaltender Cal Petersen versus the Golden Knights. The 26-year-old netminder has posted a .941 save percentage and a 2.29 goals against average from three appearances. Though the Kings have scored just 11 goals from 5 meetings to date, forward Anze Kopitar leads all Kings skaters with five points (1-4-5) in the head-to-head series. With two assists on Monday, forward Jonathan Marchessault (1-5-6) is now tied with teammate Max Pacioretty (3-3-6) for the series-lead with six points apiece against the Kings so far this season.

KINGS VITALS: The Kings hit the ice earlier today for an optional morning skate in Vegas, which has become a common occurrence following a full-team practice the day before.

With Jonathan Quick getting the nod on Monday, the rotation of goaltenders would point towards Cal Petersen’s turn this evening. As mentioned above, Petersen has excellent numbers against Vegas this season, totals that extend versus the Golden Knights in his NHL career, with a 3-1-0 record, a .941 save percentage and a 2.15 goals-against average.

With multiple players not on the ice, tonight’s Kings lineup is less clear. Todd McLellan said after Monday’s game that he still hasn’t seen the consistency he’s looking for from the bottom nine, and indicated that another forward might check-in. Does that mean another shuffle of personnel? Does that mean inserting a forward such as Lias Andersson or Matt Luff to get some fresh legs and energy into the lineup?

There’s a chance we’ll see one, or both, of those two tonight is the most we got this morning, so we wait until closer to game time tonight for confirmation.

UPDATE – The Kings activated Andersson from the taxi squad this afternoon, which clears the way for him to check in tonight.

In terms of the blueline, McLellan was complimentary of both members of his third pairing, Sean Walker and Austin Strand, both in yesterday’s media availability as well as again this morning. As such, we’re not expecting to see any changes to the defensemen that skated on Monday, which seems likely with Strand activated from the taxi squad earlier today.

“We liked the way those two played together,” McLellan said of his third pairing. “For Walks, he’s been kind of all over the map, and to ask him at this point to go to the left side, it’s a big ask, but they played quite well. I think they were only on the ice for one goal against, probably one they’d like to have back, off the end wall. Other than that, they played well, so there’s an opportunity that both of them could be back in the lineup again tonight.”

Additional roster moves from today include Olli Maatta being added to injured reserve, retroactive to 3/21, with defenseman Daniel Brickley assigned from the taxi squad to the Ontario Reign.

GOLDEN KNIGHTS VITALS: Following Robin Lehner’s victory on Monday, the hosts are expected to turn back to goaltender Marc-Andre Fleury between the pipes tonight. In his NHL career, Fleury is 10-7-4 against the Kings, with a .920 save percentage and a 2.43 goals-against average. Fleury has been one of the best goaltenders in the NHL so far this season, ranking in the league’s Top 5 in save percentage, goals-against average and goals saved above average.

Defenseman Alex Pietrangelo looks likely to return for Vegas. The team’s prized free-agent signing in the offseason has played just 18 games so far this season, due to a spell on the COVID-19 protocol list earlier this season, and an upper-body injury that has sidelined him for the better part of the month of March, after he blocked a shot on 3/6.

Vegas Head Coach Peter de Boer said this morning that Pietrangelo is expected to be available from a health perspective, but he is unsure on the “paperwork” regarding whether or not he will be activated from IR. From many individuals covering the Golden Knights, the expectation seems to be that he will play.

We Want Some Moore
We’ve covered it in-depth over the last two days, but the configuration of the team’s forwards beyond the Kopitar line has remained something for the Kings to figure out.

One interesting piece to that puzzle is forward Trevor Moore, who brought energy and spark alongside Gabriel Vilardi and Jeff Carter on Monday. That line was perhaps the best of the three lines in the “bottom nine”, combining for Matt Roy’s game-opening goal, and creating other offensive opportunities, especially in the first period.

Vilardi and Carter had played together before, but Moore is the interesting piece to that puzzle. The 6-0 forward has spent the majority of his time with the Kings on either the third or fourth line, most recently on an effective energy-trio with Jaret Anderson-Dolan and Carl Grundstrom.

When asked this morning, McLellan was highly complementary of Moore, and noted that he views his energetic forward as a player he can insert throughout the lineup, on different lines, to create an impact, while also imploring players within the organization to take note of the career path of a guy who has earned himself a role in the NHL.

“I think his game is full of energy, competitive in open ice and tight areas, puck protection, separation, solid penalty killer, great team guy,” McLellan said. “For some of our midrange younger players coming up and into the organization, maybe not being Top 6 players, there may be some in Ontario that are going to be middle six, or bottom six, this guy’s path to where he is right now is one that they should take a look at. Little later in development, finding a role. He was an offensive guy in college, he still has that in his game, but he’s been able to add to it and take on defensive responsibility. He’s worked his way into a permanent position in the NHL in my opinion.”

For the Denver University product, it was his 100th career NHL game, spent with both the Kings and the Toronto Maple Leafs. Entering camp this season, Moore was expected to compete for a roster spot, and was considered likely to get one, but he wasn’t a name you had penciled into the increased role he has earned. Energetic efforts like Monday will go a long way towards maintaining an elevated role this season.

My interview with Moore below, from today’s morning skate.

Handling Vegas
I feel like I’ve repeated so many thoughts over the last three days. Vegas is a good team. They’re opportunistic. They capitalize on your mistakes. On we go.

When he had the chance to look back a bit on Monday’s game, Todd McLellan provided a bit more insight into what he felt Vegas did well, but it again boiled down to them being a strong opponent, and the Kings needing to improve in various areas.

“Watching it, we got beat in areas that they’ve continually exposed us in,” McLellan said. “I think that’s in large part due to how well they play, but eventually, we’ve got to fix it and get better at it. A lot of plays from below the goal line, that are giving us some headaches, so we’ve got to be aware of that tonight. Some other areas of the game, there’s no sense in going through all of it, but there’s other areas that we have to improve on.”

I asked Austin Wagner and Trevor Moore, the players we spoke with this morning, how they approach a game against a team that is so deadly at punishing mistakes. Can you put a focus on not mistakes, while also not playing to not make a mistake? A tongue-twister….

Wagner
They’re a very good team, we know that, but we’ve proven that we can beat them and we’re a good team too when we’re going. We know what we have to do against them, they transition pucks really well and they go to offense very quickly. They track hard, back into their zone. I think the faster we play as a team, and push the pace, it creates success for us as a team. When we’re getting shots, and rolling around in the o-zone, you can see that we’re a very productive team….for us, just not focusing on mistakes, but playing the way that we know we can play, we know that we can be successful from certain ways that we play.

Moore
You have to make the plays that are there, first and foremost, and you have to be sure. When you’re not sure, the puck has to go in behind them and we have to get on the forecheck. You can’t be feeding their transition, because they’re big guys that move well and it gets hard on our defense, and it really hurts our offense when they’re buzzing back the other way. We’ve got to get some sustained o-zone time and slow them down.

The Kings are saying the right things, but against a team like Vegas, it’s difficult for any opponent to execute how you want to. Kings get their final crack at T-Mobile Arena, tonight at 7 PM.