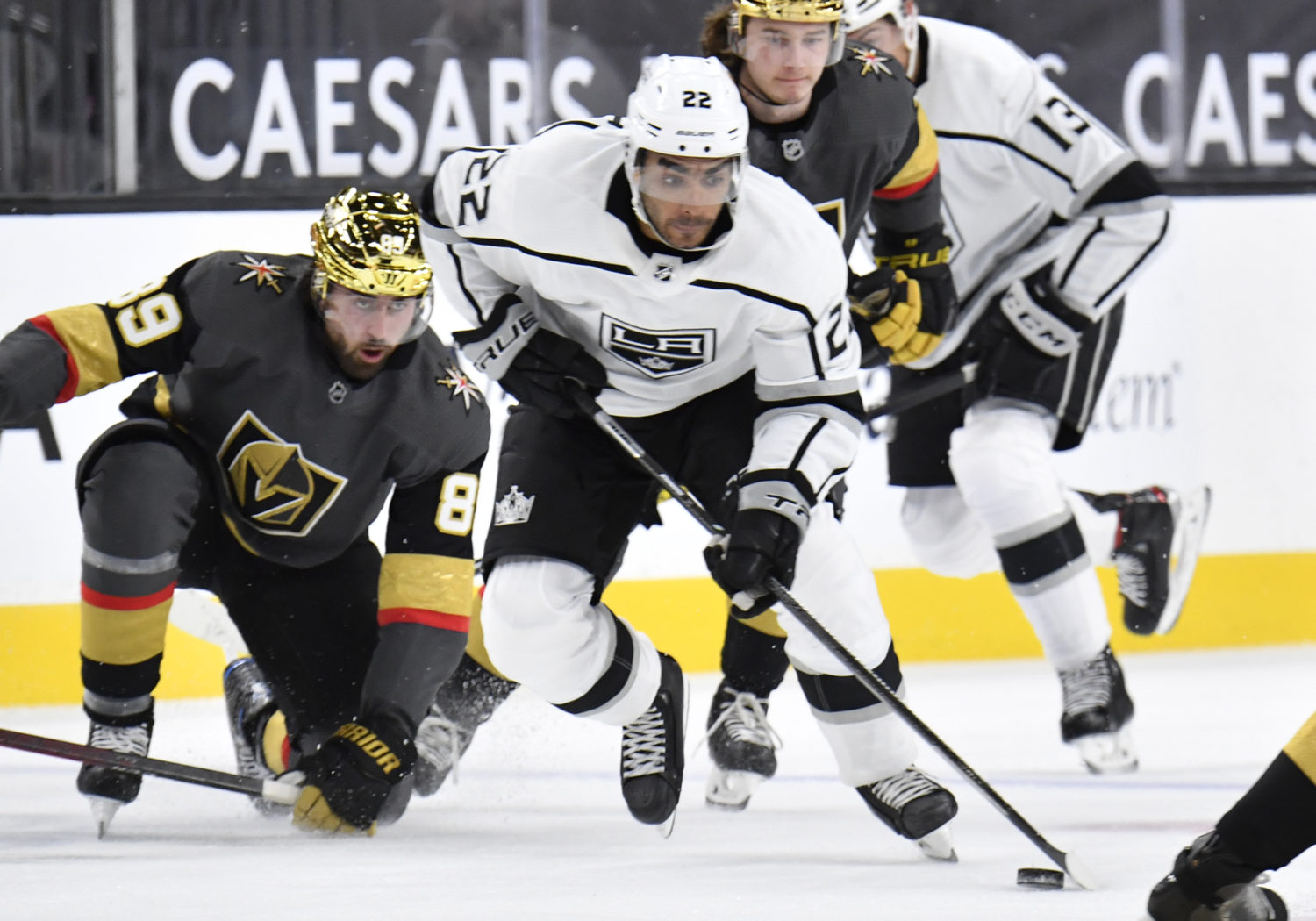 The LA Kings scored an early goal, as they capitalized on a strong start to the game, but were unable to make the first-period momentum count in a 4-1 defeat against Vegas. The Golden Knights came back with four unanswered goals, including three in the second period, to win for the fourth time in five games versus the Kings on the season.

The aggressive start the Kings have sought was there, and the visitors were rewarded early as defenseman Matt Roy opened the scoring just 60 seconds in. Forward Gabriel Vilardi collected a puck in the middle of the ice and teed up Roy from the slot, with the Michigan native’s shot beating goaltender Robin Lehner inside the right post for his second goal of the season.

Though the Kings had the better of the play in the opening 20 minutes, it was Vegas that stormed back with three goals in the second. Reilly Smith started the scoring for the Golden Knights, with a rebound goal on the power play 4:04 in, as the Kings couldn’t clear a loose puck after an athletic save from Jonathan Quick.

Vegas then scored twice in a span of less than 90 seconds in the latter stages of the second to take a two-goal advantage into the intermission. First, a tough bounce off the end boards kicked directly to Tomas Nosek, who tapped it in for the go-ahead goal, 1:26 before Nicolas Hague buried a Jonathan Marchessault feed in the slot to make it 3-1.

Neither team produced a shot on goal in the first seven minutes plus of the third period, before the Kings had a pair of good looks midway through the period, through Dustin Brown and Austin Strand. It was former Kings defenseman Alec Martinez, however, who buried a rebound against his former team for an insurance goal that put the game away.

The Kings have now lost three straight games, and six of their last eight, falling below the .500 line for the first time since February 16.

"Not great but not terrible, which is not good enough obviously."

The Captain gives his assessment on the night 👇#GoKingsGo pic.twitter.com/IjC6wDGNJi

On the regret of not getting more than one goal off a strong start to the game
Well that’s an easy and obvious answer, of course. If you can get up another one or two, you’d have a cushion for some of the mistakes that we made. From that point on, I still didn’t think we played a real poor game. It’s a hard game to evaluate right now. We’ve been in this building where we’ve been under siege, given up 50 shots and our goalies have had to stand on their head, tonight it didn’t feel like that. I just thought that they were a lot more opportunistic than they were, they took advantage of some bounces around the net, put the puck over the goal line. When we had those opportunities, we didn’t do it. Special teams, they end up +1, we end up -1, there’s part of the result right there as well.

On the changes he made up front, and his thoughts on how it was put into practice
We need to find some consistency. We go from having a good offensive and defensive night from one group of three and one line may give you a lot of offense, but they’re a disaster defensively, we’ve got to get a two-way game going with nine consistent players on a consistent basis. I’d like to keep it as similar as much as possible, but we’ll look at it again and see if we maybe have to insert someone different in there as well.

On getting the power play back on track, and Kopitar’s suggestion of more shot volume
I think Kopi’s onto something, there’s a shooting mentality that has to exist. We’ve scored some nice goals lately, and sometimes that can mislead a group into thinking that’s always how it’s going to be. There were some opportunities tonight, close touches in and around the net, Kopi to Brownie back door was within inches, sometimes it goes your way and sometimes it doesn’t. Kopi is certainly onto something with a little more of a shoot mentality, get it back, and then let’s see what happens off of that, rather than trying to break them down with a nice play.

On if he saw some things from tonight that he liked, that was practiced over the last few days
We improved in some areas. It’s hard for me to sit here and tell you that, people are going to say what the hell is this idiot talking about, but we did some things better than we did in San Jose, when we outshot a team 2-1 and lost. It’s just a simple fact that these guys will really make you pay for your mistakes, or your errors. In fact, I thought we made fewer tonight than when we beat them 3-1 last time. They had us under siege in the third period and we made more mistakes in that game than we made in this one, and we lost 4-1.

– Defenseman Matt Roy moved into a tie for second amongst Kings defnesemen in goals this season, with his second goal of the season 60 seconds into the game.
– Roy’s goal was the Kings’ second-fastest goal of the season, trailing only Anze Kopitar’s goal in this same building, 36 seconds into the game on February 7.
– With the primary assist on Roy’s game-opening goal, forward Gabriel Vilardi extended his scoring streak to three games (0-3-3).
– Kings forward Trevor Moore skated in his 100th career NHL game tonight.
– The Kings allowed their first opponent power-play goal in nine games, going 2-for-3 on the penalty kill tonight. This season, the Kings are 81-for-95 on the penalty kill, ranking fourth in the NHL in PK percentage (85.3%).

The Kings are scheduled for a practice tomorrow at noon at T-Mobile Arena.