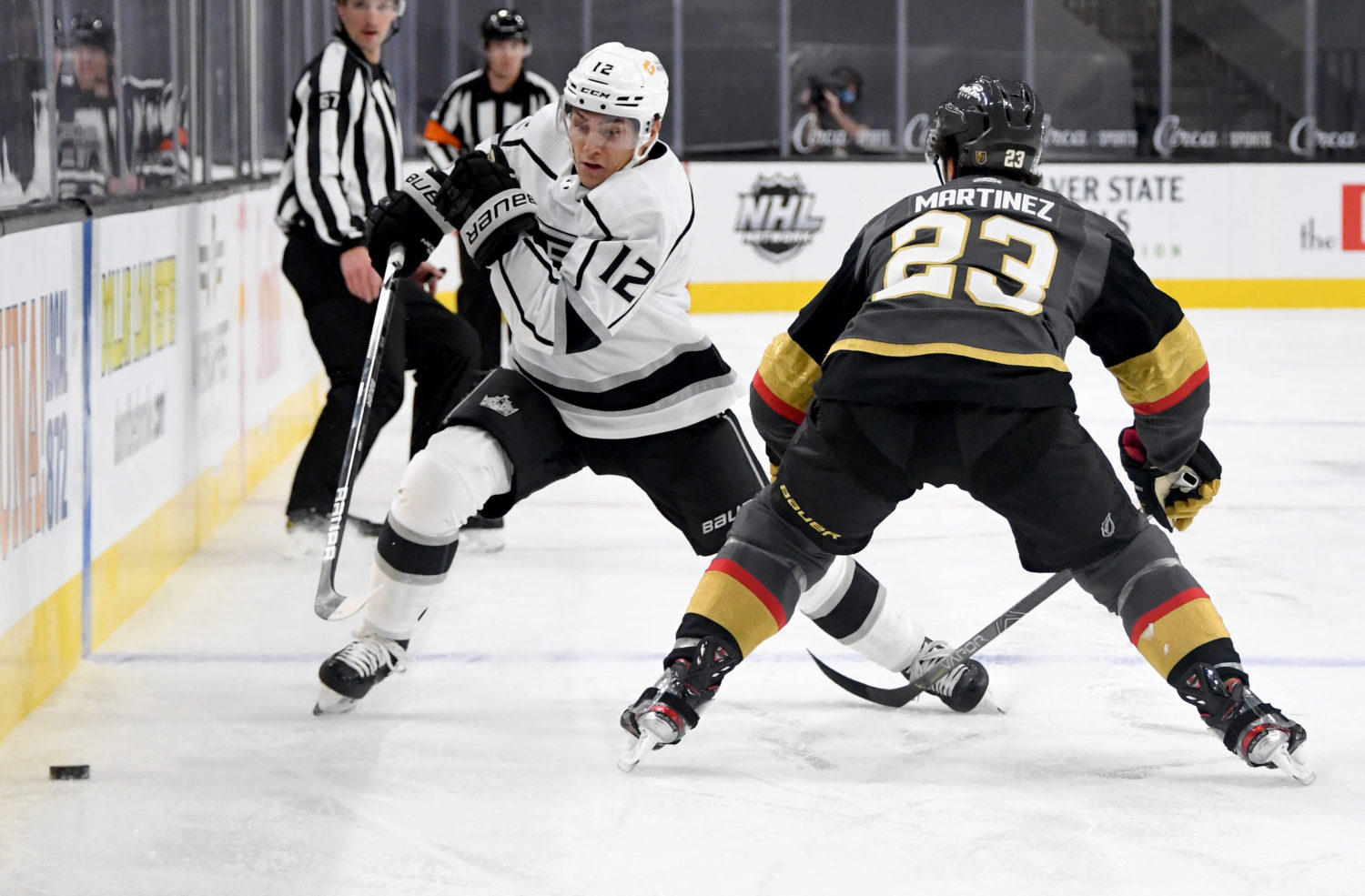 TONIGHT’S MATCHUP: The Kings and Golden Knights begin a two-game set this evening at T-Mobile Arena. The Kings are in search of their first victory of the season in Vegas, with the Golden Knights winning both meetings back in early-February.

HEAD-TO-HEAD: From four games played so far this season, forward Anze Kopitar leads all Kings skaters with five points (1-4-5) in the head-to-head series, with no player across the NHL collecting more assists versus Vegas so far this season. A trio of Kings have three points from four games – Dustin Brown (2-1-3), Alex Iafallo (1-2-3) and Trevor Moore (1-2-3). Forward Max Pacioretty leads all skaters in the season series with three goals and six points, though he missed the most recent meeting at STAPLES Center with an injury. Nicolas Hague leads all defensemen with four points (1-3-4) versus the Kings, one of four Vegas skaters with four points so far this season.

KINGS VITALS: The Kings are finally back in game action this evening, four days after their most recent contest, a 4-2 defeat in San Jose.

The Kings were off Thursday and Friday and skated in full-team practices on Saturday and Sunday, with this morning’s skate being optional in Vegas. Following today’s skate, Todd McLellan said that we won’t expect to see any changes to the 12 forwards who played in San Jose on Wednesday but that the team is considering a change on the backend.

Defenseman Austin Strand was elevated to the active roster from the taxi squad, which makes him the likely change that was referenced. Strand made his NHL debut during the team’s last trip to Vegas, and has 7 NHL games, as well as 11 AHL games so far this season.

Mikey Anderson was back on the ice for the second consecutive day, after he missed Saturday’s practice due to a non-COVID related situation, deemed by Todd McLellan as “just not feeling well.” Anderson is expected to play tonight without issue.

In terms of the forwards, in speaking with McLellan this morning, he acknowledged that he is still looking for the right line combinations behind the Kopitar line. Kopitar, with Alex Iafallo and Dustin Brown on the wings, have remained a consistent line for much of this season, but the makeup of the nine additional forwards have changed significantly, due to injury and a search for the most effective groupings.

“We’re scrambling a little bit to find good combinations with the bottom nine,” McLellan said. “For me, that [second-line] center is really important. Gabe was doing a real good job, we moved him to the wing for a short period, he’s back there now, so hopefully he can provide for us stability in the two-hole, and then it filters on down for everybody else. The one player that’s played really well for us, but has been misfit, and moved all over the place, has been Kempe. Just trying to find a solid home for him. In any case, we’ll keep moving people around until we find something that works, both offensively and defensively. It’s not just about the scoring part, it’s about the preventing part and eventually, it will fall into place.

Cal Petersen and Jonathan Quick have split games on a near half-and-half basis so far this season. When both goaltenders have been healthy and available, Petersen has made 14 starts, while Quick has made 13. If Petersen earns the nod this evening, he will look to build off of his last start against Vegas, in which he stopped 40 of the 41 shots he faced, in a 3-1 victory. In his NHL career, Petersen is 3-1-0, with a .941 save percentage and a 2.15 goals against average versus the Golden Knights.

If Quick gets the nod, however, he has been a new goaltender since he was pulled here in Vegas in his last start here. Since that game, Quick has posted a .921 save percentage across eight appearances, including a 4-4-0 record and two shutouts, though he also missed two weeks with an upper-body injury earlier this month.

GOLDEN KNIGHTS VITALS: The hosts are expected to start goaltender Robin Lehner tonight, after Marc-Andre Fleury started each of the team’s last two games versus Colorado this past week. To date, each netminder has started twice against the Kings, with Lehner winning each of his appearances. In his NHL career, Lehner is 6-5-0 with a .923 save percentage and a 2.58 goals against average against the Kings, and the six-foot four netminder has earned at least a point in each of his last six starts versus LA (5-0-1).

Here is how the Golden Knights lined up this morning, per David Schoen –

The Kings just ended a stretch of 12 games in 20 days, and now, after four days off from games, are entering another tight, and more extended, stretch to close the season.

Rest was, and will continue to be, important and we typically focus on the older players, who are managing their bodies the most throughout the condensed slate of games. McLellan previously referred to the Kings as “almost two separate teams” at times, when referring to the differences in what is needed for certain guys at this stage in the season.

Today however, he emphasized the importance of rest for all players, including the younger guys, many of whom are going through this NHL gauntlet for the first time.

“It doesn’t matter how old you are, you need rest, both physically and mentally,” McLellan said. “Just because you’re an entry-level player, maybe you haven’t played 100 games, there’s still a lot of stress on the body and on the mind, and they need rest time as well.”

McLellan added his level of concern for the players on the taxi squad, in the other direction, guys who aren’t regularly playing NHL games, but are with the NHL group. Those players are an area of emphasis for different reasons, with more low-intensity skates and practices occurring right now, based around managing the heavy workload of games, which don’t necessarily fill the needs for those on the taxi squad.

Speaking this morning with Tobias Bjornfot, in his first go-around in the NHL, he emphasized the importance of eating right, and sleeping right, as keys to keeping his body where it needs to be.

“Yeah it’s different,” Bjornfot said, of the NHL schedule versus what he experienced last year with the Ontario Reign. “I’m just trying to eat good, sleep and do those things perfectly. Just trying to rest as well, keep in good shape.”

Gabriel Vilardi noted similar things on Saturday. For Vilardi especially, who played just a partial season with Ontario last year, this is his first full professional season, and he’s doing so in an ever condensed NHL setting.

He noted that it’s been challenging, but it’s what he signed up for, and he’s going to approach it as such.

“It’s different, it’s really different,” Vilardi said. “Especially with this year, we’re playing every other day almost, it’s nice we had two days off here, it’s really, really nice. Just kind of let go of the game a little bit and relax. It’s hard, but at the end of the day, it’s what I want to be doing. I’m happy, because I get to do it.”

As we progress forward, we’re not expecting to see a ton of long, extended practices left, like what the Kings had on Saturday. It’s go time in terms of games, and the schedule will be treated as such.

Hear from veteran forward Dustin Brown this morning, who touched on turning more of the team’s chances on the power play into goals, working with younger players who are struggling, player-to-player, and how much he pays attention to the standings at this time of the season.

Lastly, we got our first official evaluation of the newly acquired Brendan Lemieux from a member of the Kings organization this morning. Here’s what McLellan had to say about his newest forward –

“When you put a team together, you’re looking for different types of ingredients. Skill, speed, scoring, checking, grit, toughness- those are all elements required to be a good team. Brendan’s proven that he brings a certain element, that grit, that nastiness, that toughness with some other teams in the National Hockey League. He’s still considered a young player, age wise and experience wise, and we think that he can help.”

Kings and Golden Knights Game Thread is up next in Vegas!

By Zach Dooley
293 Comments
Behind the Scenes

By Zach Dooley
911 Comments
Behind the Scenes