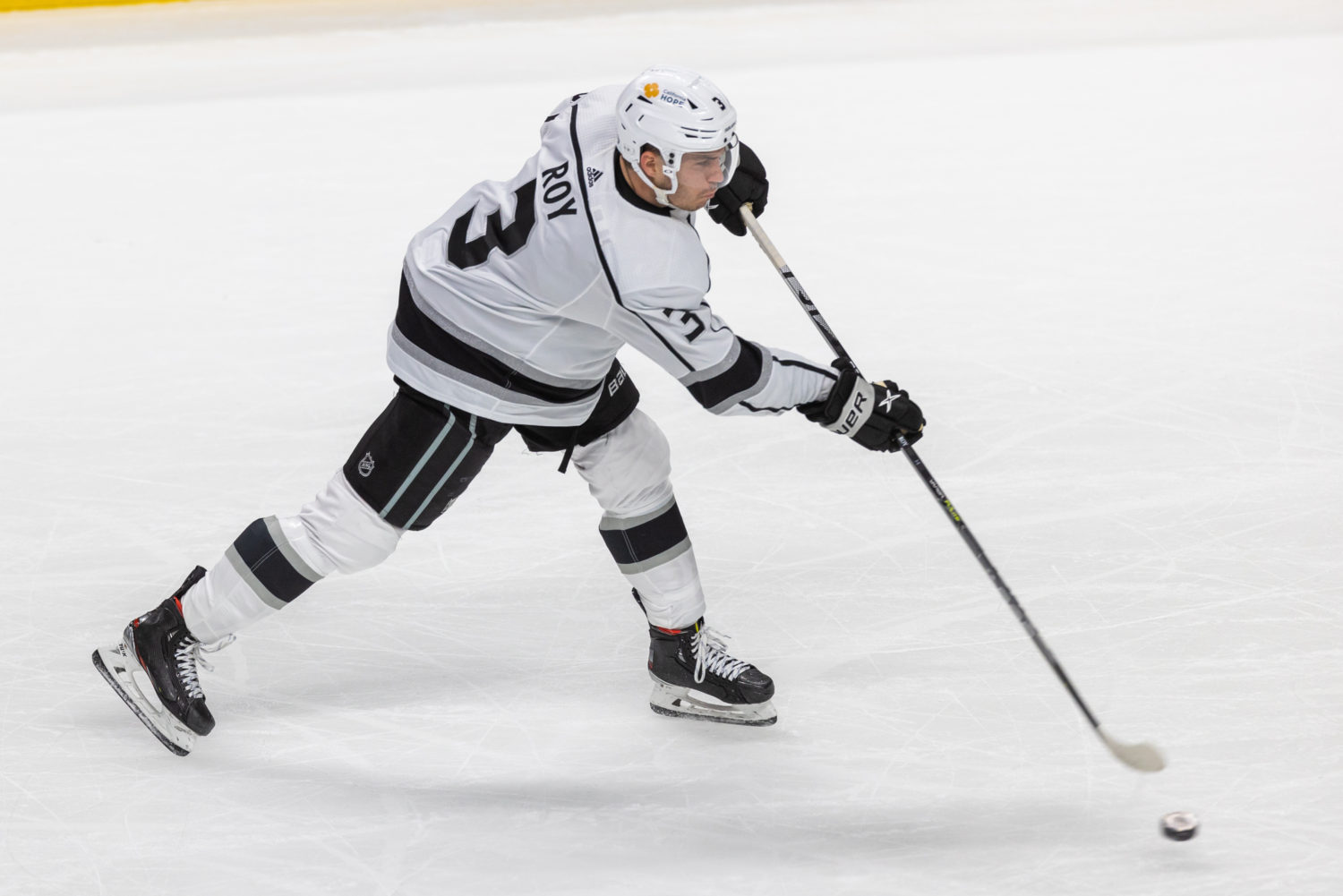 Matt Roy, the man Kings Head Coach Todd McLellan refers to as “Steady Eddie”, is locked up for the next three seasons, after he signed a contract extension last week. Roy has been a solid presence on the Kings blueline, as he rose to the National Hockey League from the seventh round of the NHL draft. Now, he’s a part of the future of the LA Kings organization moving forward.

“It’s great, it’s something that, personally, I’ve been working pretty hard for,” Roy said yesterday. “I’m glad that we could get the paper signed, and I’m ready to get going here over the next couple of years.”

With Roy’s extension now inked, the right side of the Kings defensive corps is now under contract through 2024. Drew Doughty signed his massive extension and is locked in on the team’s top pairing for the foreseeable future, while Sean Walker signed his four-year extension this past offseason, after the expiration of his entry-level contract.

Roy and Walker are now under contract for the next three seasons after this one, combining for a reasonable cap hit of less than $6 million per season. Locking in the Michigan native long term made a lot of sense for the organization and was well-deserved for a player who has earned everything he’s gotten so far in his career. 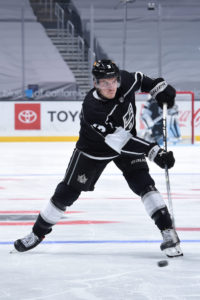 “As far as his extension, he deserves every little bit of it,” McLellan said. “We have a ton of confidence in him, I think he feels comfortable here with the group and much like Walker, they’ll have an opportunity to grow and get better as the team gets better.”

The process started with Roy last summer, which came after his first full season at the NHL level. The right-shot blueiner provided a steady, consistent presence, despite his inexperience, that earned himself a place in the longer-term plans of the organization.

Negotiations were eventually tabled until the season, and picked up recently over the last few weeks. There was a mutual desire between the Kings organization, and for Roy himself, to get a deal done to keep Roy in the black and white for the foreseeable future.

“[The Kings] reached out last summer, we were going back and forth a little bit, but things really started to take off the last couple of weeks,” Roy said. “I think that we both wanted to get something done and I’m glad we did.”

Roy entered the NHL in the latter stages of the 2018-19 NHL season, and earned a job out of training camp in fall-2019. He worked his way from a rookie entering the league, off of a successful year and a half in the AHL, to a contributor, as he earned an all-Rookie Team vote from his play last season.

Now, Roy has been identified as a member of the team’s evolving secondary core, the group of players in between the veteran five players, and ahead of, in terms of experience, the up and coming, top-ranked prospect pool in the NHL. Roy has the added task of being a veteran presence for this Kings team, helping to work with younger players entering the league.

Looking at Roy’s presence in the lineup, he has already begun to assume more of a leadership role, leading through example as he’s been paired alongside younger players such as Mikey Anderson, Tobias Bjornfot and Kale Clague so far this season.

Similar to how Roy played with veteran Alec Martinez last season, as he broke in, Roy is hoping that as he continues to establish himself as a more experienced player in the league, that some of the things he does to be consistent are rubbing off on the younger defensemen in the organization as well.

“Personally, I just try to lead by example as best I can,” he said. “I’m not going to be one of the rah-rah guys in the locker room, we’ve got the older guys for that, but I try to learn from the older guys and just try to bring about my daily routines. Hopefully, some of the younger guys can pick up on a couple of things and I’ve been playing with Toby a lot recently, Claguer, Mikey last year, so I think that there’s been a responsibility there and I just try to help them out as best I can.” 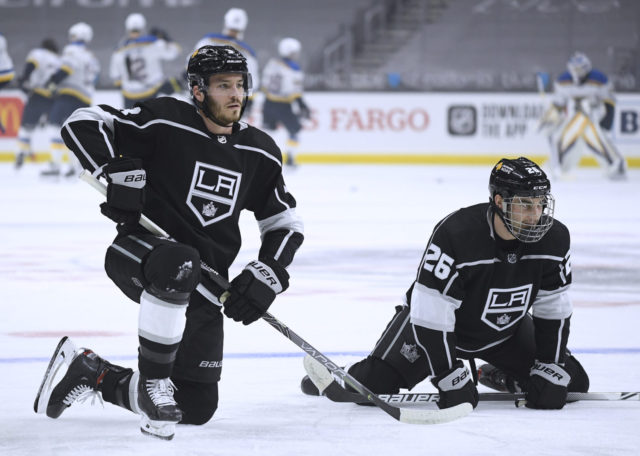 There was never a guarantee that a player like Matt Roy would become a consistent, NHL presence.

Selected in the seventh round in 2015, Roy has head to earn everything he’s gotten, starting with his first development camp with the Kings and moving forward. Although, he almost wasn’t even sure if he would have the opportunity to.

On his draft day, Roy was at home with his family as the internet went out at his house, and with the draft already into the final stages, information at that time was released almost exclusively online. When it finally kicked back in, Roy saw that a left winger from Canada named Matthew Roy was selected by the LA Kings. He wasn’t even sure at the time that it was him, but by the time he got the official call from the Kings he was excited.

“We found out that there was a Matt Roy, left winger from Canada, that got picked and we weren’t really sure,” he explained. “Then I got the call and everyone was just so happy and to get picked by LA was so special.”

Not all seventh-round picks earn second contracts in the NHL, let alone even make it to the league. Roy has proven to be the exception to the rule. He wasn’t always the guy at the top of the “how is this prospect looking” list of questions asked, of guys in college or junior hockey. By the time he made his way to the AHL, and cemented himself as a top blueliner for Ontario, everyone had taken notice.

“I think that being a late bloomer, I think I kind of flew under the radar a lot and I tried using that to the best of my abilities,” he said. “I just tried proving it to myself every night and luckily I’ve played with some great teammates, who can help me out along the way, and I’m glad to be where I’m at.”

Late bloomer or not, Roy has arrived now. He has made that transition from an under the radar prospect, to an NHL regular, and now he has the contract security to prove it.

Roy’s story is a successful one, for himself and the organization. The Kings got a Top-4 contributing defenseman off of a late-round draft pick, and Roy has turned what was never a sure thing of an NHL career into one of the bigger late-round steals in hockey in recent seasons.

From the day he initially joined the organization, Roy knew he could hang with those around him, first in the AHL and then in the NHL.

“When I signed my first contract, and went to Ontario, I realized that there’s a lot of good players, everyone is tough, strong and skilled, so I think from there, I always believed I could personally [reach the NHL], but I had to go out there and prove it,” Roy said. “I just took it one day at a time, and one step at a time.”

Whatever the approach has been, here’s to it continuing for the next three years, one day at a time! 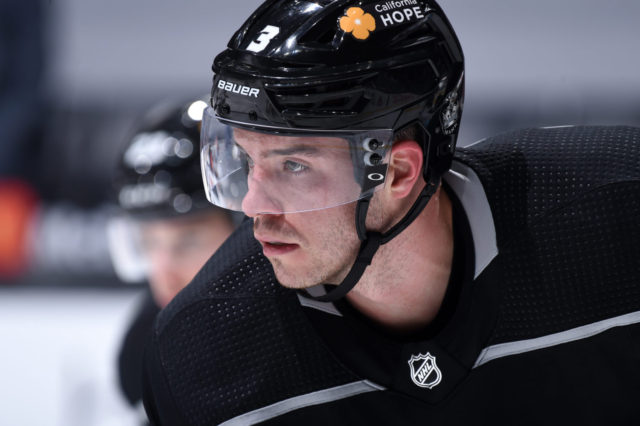 By Zach Dooley
879 Comments
Behind the Scenes

By Zach Dooley
483 Comments
Behind the Scenes