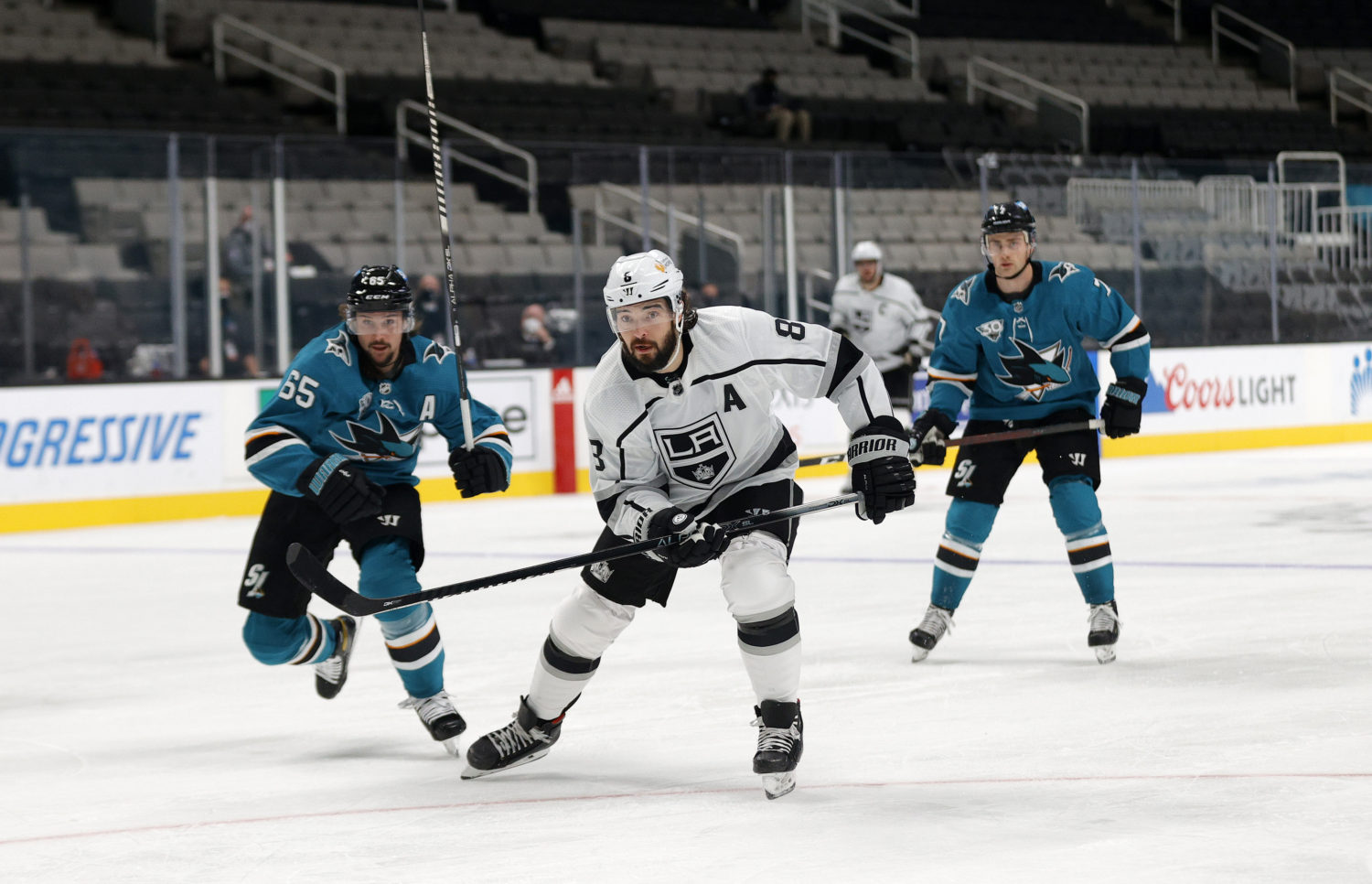 This series in San Jose stings.

There would be a lot of ways to sit down and write why, but I think that Drew Doughty summed it up about as well as I could have, with his quote on the two games yesterday.

“It’s disappointing for sure,” Doughty said. “San Jose is a good team, and I believe we can win every game, but this was a series that, before we started, I really believed we could win. I believed that we could outplay them, and we did at times, but we just didn’t get the job done. We seem to hang around and play better when we’re playing the teams at the top of our division, which is not a good thing. We need to win these games if we want to make playoffs. Again, no disrespect to San Jose, it’s just they’re a team I think is more equal to us than a team like Colorado or Vegas.”

There’s a narrative floating around that it’s the games against St. Louis and Minnesota that will determine whether or not the Kings will make the playoffs. And, while I understand the thought process there, those games just don’t have the meaning that they should if you don’t take care of business first and foremost against the teams below you in the standings.

These two games feel like a missed opportunity not only versus an opponent that is more around the stage in the process that the Kings are, but also with the disparities in shots across the 120 minutes. The Kings tied a season-high with 42 shots on goal on Monday, and then went and broke the mark with 44 shots on goal on Wednesday.

86 shots, 35 more than their opposition had, feels like it should win you more nights than it doesn’t. The shots on goal, and the puck possession metrics, are both good things, and over time, the law of averages, regression towards the mean, or whichever cliched expression you prefer eventually says those pucks will go in. Unfortunately for the Kings, this week featured two nights where it doesn’t.

Though the box scores in many ways might look the same, the two games left quite differing tastes in the mouth of Head Coach Todd McLellan.

On Monday, playing the second half of a back-to-back, with travel included, against a team that did not play or travel the day before, McLellan was generally pleased with the performance. As he put it after the game, just one of those nights where the puck didn’t travel across the red line in the blue paint.

“I thought we did [create good looks] tonight, to tell you the truth, it just didn’t go in,” he said. “It wasn’t in waves, but every now and then we’d get a good, Grade-A opportunity, and we just didn’t find the net. We hit a post, we had an open net at the end, even with 0.2 seconds left, we’re staring at the goaltender and couldn’t get the puck up….I thought our group played pretty well, we didn’t give up much, both our goals go in off of one of our players. Sometimes, it’s not your night, yet you put in a pretty good effort.”

Night two, however, was a different story for the Kings bench boss.

McLellan felt that his team’s play in terms of defending the rush was perhaps the worst it’s been all season. San Jose scored three times off the rush, a 2-on-1 goal, a 4-on-2 goal, and another 2-on-1 goal, though you could argue 2-on-2 with a backchecker.

When asked after the game, it was the goals that the team allowed, not the shot disparity in his favor, that will stick with him from Wednesday’s defeat.

“Goals allowed, without a doubt,” he said, of his biggest takeaway. “That was as poor of rush coverage as I’ve seen from our group of D, and our forwards…set up some outnumbered rushes by poor game management. We got impatient, we weren’t scoring, we had some chances but we weren’t scoring, we got impatient and they stung us for it. It’s a tough lesson to learn. We just didn’t handle the rush at all, we had some really poor performances back there in that area.”

On night one, the Kings generated a ton of opportunities – many of them came from either the outside, or shots from better areas or without traffic, though, as McLellan correctly pointed out, they did mix in those Grade-A looks as well. They just didn’t convert them.

Night two seemed to actually feature more of those high-danger scoring opportunities too, which is supported by the analytics, as the Kings did get into the areas on the ice they wanted to, with both goals coming from good areas of the ice. The defending issues, however, were the defining issues for McLellan when it comes to the final result.

The two games in San Jose ended an intense stretch of hockey for the Kings. Originally scheduled to play 13 games in 20 days, the Kings wound up playing just 12, with the weather-related cancellation versus St. Louis. The next four days without games present a welcomed break in the action, before an absolutely frantic closure to the season.

The Kings will play their final 24 games of the season in a span of 41 days, including the last game against the Blues that has yet to be placed on the calendar. They have two days off in between games exactly one time for the rest of the season, and that’s not because they have a three-day gap, either. It’ll be back-to-backs, and lone days off, from here on out.

The coming days will be a critical time for the Kings to rest. Once they hit the ice in Vegas, for their next game on March 29, it’s full steam ahead until May.

There’s not a total need for this piece to feel completely “doom and gloom” though, because we’re past the halfway point in the season and the Kings are firmly in the hunt for the postseason. It’s not quite as firmly in as they were coming off the victory over St. Louis a week ago, but five points out with 24 games to play feels like at least a punchers chance, especially when you consider that 14 of the 24 will be played at STAPLES Center.

The fact that the players, coaches, and Insiders here are particularly disappointed with these results is a good thing, because these games carry importance, both for the short-term playoff push, and long-lasting impacts of getting young players into competitive games. With 24 games left last season, what would the reaction have been to a pair of losses on the road?

The Kings are in a position to set up an exciting finish to the season, and it will be up to an evolving, developing group to determine where they end up.