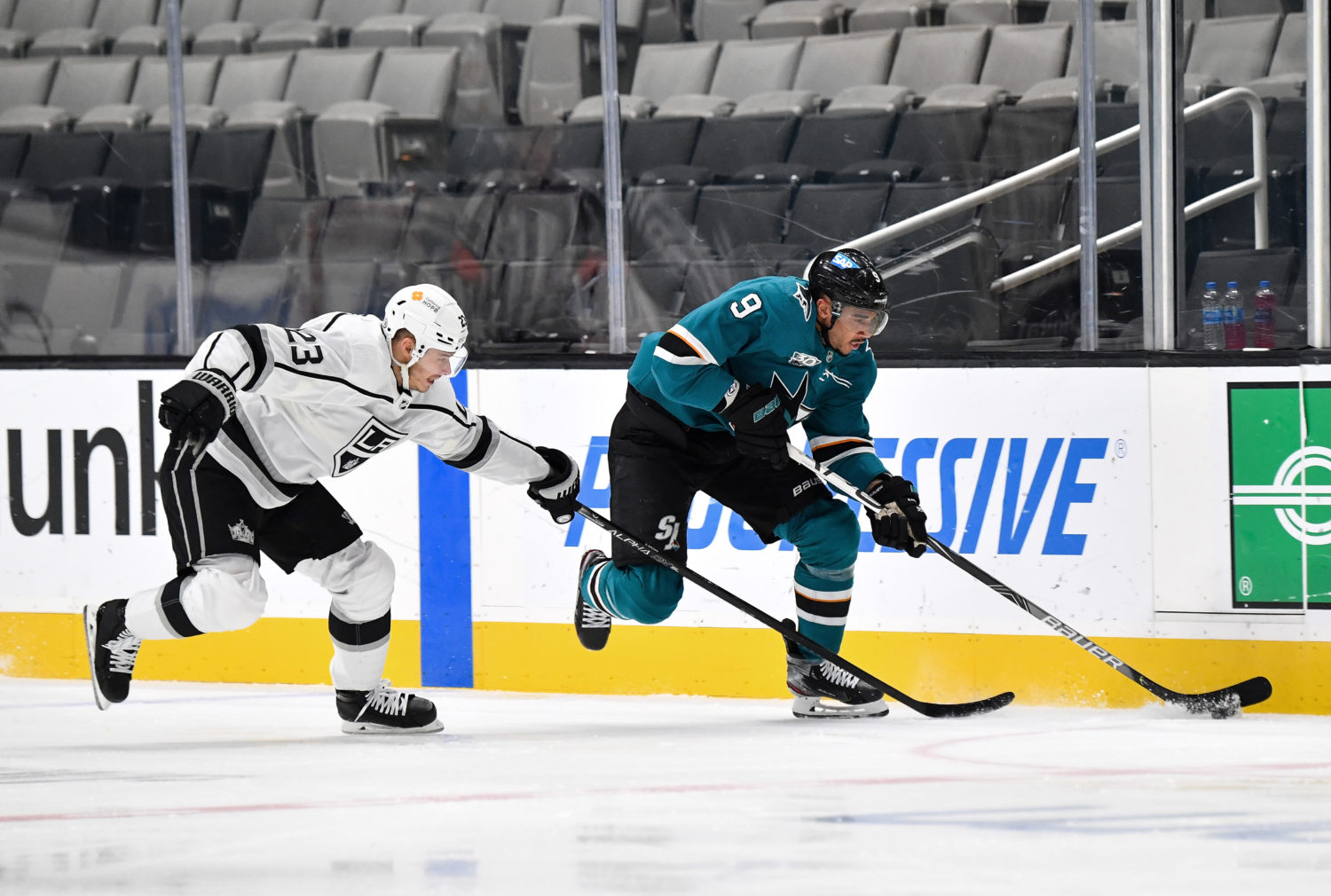 The LA Kings controlled the shot margins for the second consecutive game in San Jose, but for the second contest in a row, found themselves on the wrong side of the scoreboard in a 4-2 defeat against the Sharks at SAP Center.

Tonight, it was handling offensive opportunities off the rush, with San Jose striking three times off of odd-man situations, in a variety of different ways. As McLellan says below, it was perhaps the worst he’s seen his team handle that specific element of the game, overshadowing the heavy shot totals throw at the Sharks net.

Both teams had two opportunities on the man advantage in the first period, and combined for six shots on goal, but neither team scored in the opening period. The Kings controlled the play at 5-on-5, though it was San Jose that had perhaps the best chance of the opening frame, as an uncovered Evander Kane missed the net from the slot inside the final minute of the period.

The Sharks then scored the game’s first two goals, both off of odd-man rushes, to take a 2-0 lead midway through the second period. Rudolf Balcers finished off a 2-on-1 from Marcus Sorenson to open the scoring, before Evander Kane fired home a Brent Burns feed off a 3-on-2, and it was 2-0 Sharks.

The Kings, however, got a goal from Alex Iafallo, who redirected a Dustin Brown pass with just 12.4 seconds left in the second period, to make it a one-goal game heading into the second intermission. Iafallo had more high-danger chances than any other Kings player through five periods in San Jose, and it was only a matter of time before he got one to go.

San Jose jumped out with two goals inside the first two minutes of the third period, with Kane collecting his second of the game on a re-directed effort, before Tomas Hertl struck for his team’s third goal of the game off the rush, as he went across the grain with a wrist shot from the slot to make it 4-1.

There was a pushback from the guests, with Drew Doughty creating a goal for Adrian Kempe just a couple of minutes later, to cut the deficit to 4-2. The Kings finished with a season-high 44 shots on goal, but were unable gt the necessary looks late to draw closer down the stretch, finishing the evening two goals down.

On what will stick with him more from tonight, the shot disparity, or the goals allowed off the rush
Goals allowed, without a doubt. That was as poor of rush coverage as I’ve seen from our group of D, and our forwards…set up some outnumbered rushes by poor game management. We got impatient, we weren’t scoring, we had some chances but we weren’t scoring, we got impatient and they stung us for it. It’s a tough lesson to learn. We just didn’t handle the rush at all, we had some really poor performances back there in that area.

On the importance of 5-on-5 five scoring
We’ve been able to be productive on our power play for most of the season. I don’t know what we had tonight, maybe two opportunities, and we had better looks tonight than we had the other night. When it’s not there for you, you can’t score every night, it’s impossible, it’s never happened. So, the 5-on-5 play has to improve. Quite frankly, I think if we defend better, we score three. It’s just the way it goes sometimes. We defended so poorly, we had to open things up and they kept scoring. I’m not concerned about our lack of finish around the net, we had a lot of chances, it comes and goes. I’m concerned about our defending and our ability to defend the rush, how we created some of those problems for our backend.

– Defenseman Drew Doughty collected two assists in tonight’s defeat, his seventh multi-point game of the season. Doughty is tied for fourth in overall scoring amongst defensemen with 27 points this season.
– The Kings had a season-high 44 shots in tonight’s game, one game after tying their previous season-high of 42 on Monday
– The Kings have now gone nine games without allowing a power-play goal, dating back to March 8. LA is the only team with a perfect penalty kill in that span, and the Kings rank fourth overall in the NHL in PK% this season.
– With an assist in the third period, forward Gabriel Vilardi now has points in back-to-back games.
– Held to two goals tonight, the Kings have scored three or fewer goals in six of their past seven games played.

The Kings are scheduled for an off day tomorrow, following their return trip home tonight.