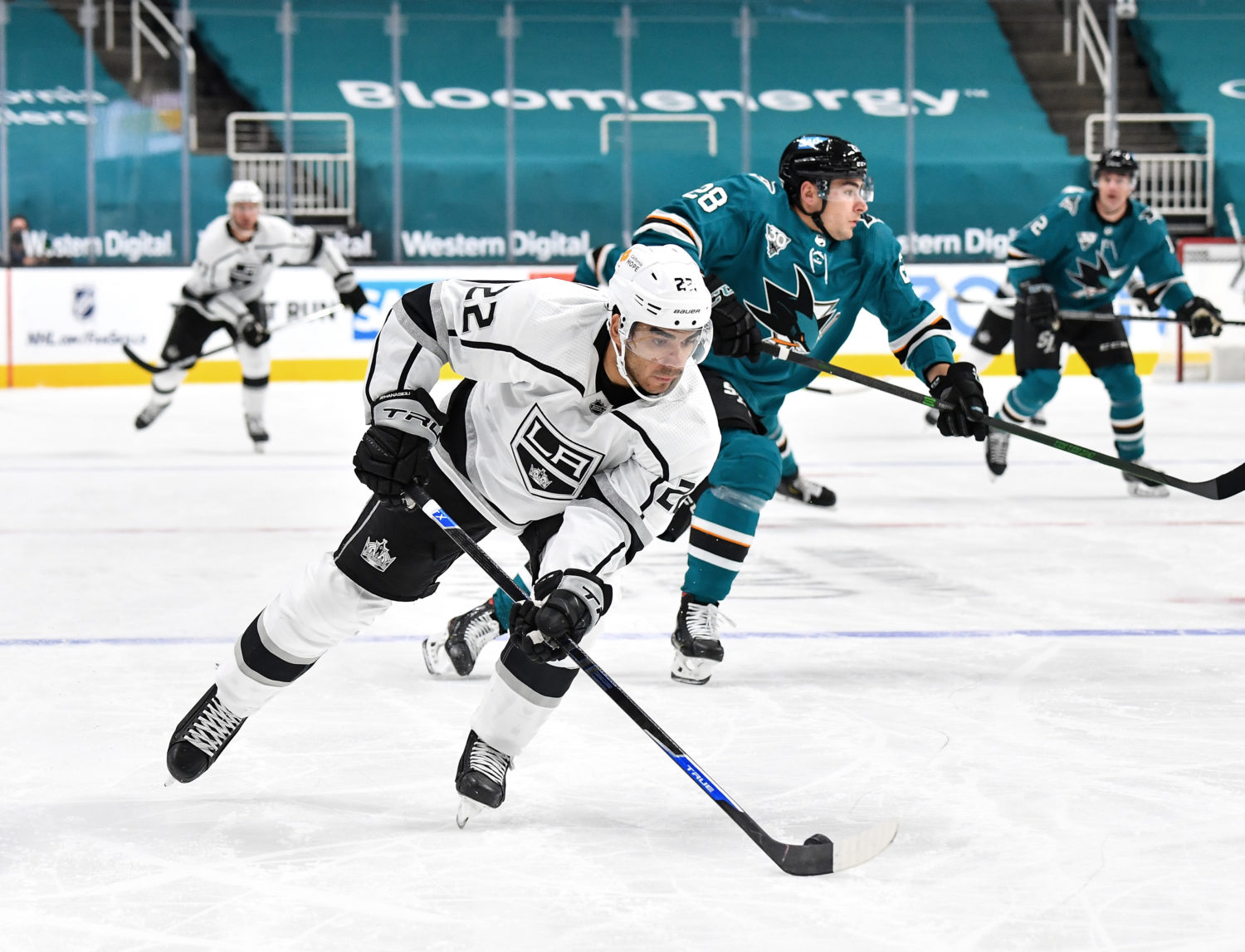 TONIGHT’S MATCHUP: The Kings and Sharks conclude their two-game set this evening at SAP Center in San Jose. The Sharks took Game 1 by a 2-1 final on Monday, as they improved to 2-1-0 on the season versus the Kings.

HEAD-TO-HEAD: Forward Dustin Brown (2-2-4) and defenseman Drew Doughty (0-4-4) lead the Kings this season with four points apiece against the Sharks. With the lone LAK goal on Monday, Matt Roy tallied for the second time in his NHL career versus San Jose, the first opponent he’s scored multiple goals against. For the Sharks, forward Logan Couture leads all skaters with four points (2-2-4), while defenseman Nikolai Knyzhov has three assists from three games played, extended with a helper on Monday.

KINGS VITALS: The Kings were back on the ice for a morning skate earlier today in San Jose, following yesterday’s off day.

Here’s how the group lined up this morning at SAP Center, with all traveling skaters accounted for –

Jonathan Quick made his second start in three games on Monday, as he took the defeat with 21 saves on 23 shots faced. Quick’s start was his first of the season versus the Sharks, as he fell to 17-13-7 in his NHL career versus San Jose. If Quick gets the nod tonight, it would mark the first time since mid-February that he’s started three of four games for the Kings.

If Todd McLellan chooses to continue the rotation of goaltenders, and Cal Petersen gets the start tonight, he carries a 1-0-1 record from two career starts versus the Sharks, to go along with a .930 save percentage and a 2.40 goals against average.

The Kings have used both a 12-6 and an 11-7 alignment over the last two games. With defenseman Olli Maatta out through at least tonight’s game, the Kings have seven defensemen available to them, including Austin Strand, who was recalled from the Ontario Reign on Monday afternoon, however McLellan said this morning that Strand will not play tonight. With that in mind, my expectation at this time would be to see the same alignment the Kings used on Monday, listed below –

Regarding the forwards, McLellan was happy with how Vilardi responded to being moved both to the wing, and to the fourth line. Vilardi has had varying degrees of success so far this season, but had just three points (1-2-3) over 11 games, before he tallied an assist on Monday. Vilardi continues to be an extremely important player for the Kings, and McLellan is hopeful that this move can help to get him back on the right track.

“I think he’s had two of his better games, the last couple of nights, playing on the wing,” McLellan said this morning. “Obviously winning that faceoff, being involved in the offense there, he’s still got responsibilities on the power play, he’s shot the puck a lot more, got it to the net a lot more in the last two nights since he’s gone to the wing. Let’s let him feel comfortable there and then we’ll move him around as we need.”

SHARKS VITALS: Similar to the games played at STAPLES Center, expect Martin Jones, and his solid splits versus his former team, to get the start in both games against the Kings. Jones made 41 saves on 42 shots on Monday evening, as he improved his career stat-line against LA to 15-5-3, with a .925 save percentage and a 2.26 goals against average.

Per Kevin Kurz of The Athletic, forward Antti Suomela is expected to enter the lineup tonight in place of forward Kurtis Gabriel, though that is expected to be the only change for the home side. Here is a projected lineup for the Sharks this evening –

The NHL announced on Tuesday that the league was fining Gabriel for his actions in warmups on Monday. Gabriel cross-checked Kings defenseman Kurtis MacDermid during warmups, and the two later dropped the gloves in the first period. San Jose Head Coach Bob Boughner was also fined, and the Sharks were assessed a conditional fine of $25,000, which will be collected, in addition to any subsequent discipline, in the event of similar inappropriate behavior through March 22, 2022.

As stated above, Gabriel is not expected to dress for the Sharks in tonight’s rematch.

The Kings held an advantage in just about every category you can think of, when it comes to getting shots on or at the goal, though it amounted to just one goal on Monday evening.

Jeff Carter led all skaters with seven shots on goal, and his line with Adrian Kempe and Andreas Athanaisou has created a ton of looks since they were united midway through the game on Friday against Vegas.

“We had a ton of shots, the last two games really, we’ve had a ton of opportunities, just haven’t been able to find the back of the net,” Athanasiou said this morning. “Especially last game, when we needed a goal, it’s a little bit tough, but we’re creating a lot of opportunities and eventually those pucks are going to go in. Keep working, sticking with it and as long as we’re getting those good chances, I’d bet on them going in for sure.”

Athanasiou’s comments seem to jive with what Todd McLellan said after the game on Monday. Stay the course.

The 42 shots on goal on Monday tied a season-high for the Kings, but the Kings also allowed just 23 shots on goal, tied for the fourth-fewest in a game so far this season. Both San Jose goals deflected in off of Kings defenseman Kurtis MacDermid, with both really being just unfortunate bounces, and both were pucks that came in from the outside. Overall, the Kings felt that they did a pretty good job at limiting San Jose’s opportunities in the more dangerous areas on the ice.

“I thought, overall, we did a pretty good job of not giving up too many second or third looks,” defenseman Mikey Anderson said. “Obviously the goals there, unfortunate bounces that hit our guy and go in, but that’s part of the game. I thought, overall, we were pretty heavy on our sticks, we didn’t give up too many second, third and fourth looks, right after the other, and that’s something we’re going to look again tonight.”

Hear the full interview with Anderson this morning below.

It is rare to see the Kings lose a special-teams battle this season. By goals scored, they didn’t lose it on Monday against San Jose, with neither team converting on the power play, but they also didn’t win it.

The Kings have “won” on special teams, meaning scoring more goals than the opposition, 13 times, and have had the opposite happen just three times. In those 13 games, the Kings have earned a point in 12 of them, and to earn at least a point on Monday, they just needed to find a goal on the power play – on five opportunities – but the team lacked its usual sharpness, and were unable to get a ton going while up a man. They also had a pair of quality shorthanded opportunities, though those are a gift, not the norm.

It wasn’t for lack of generating chances, either, but rather a lack of “polish”, as Todd McLellan put it after the game. The Kings had their looks on the PP, as well as late in the game with a 6-on-5 and the empty net, but weren’t able to find the tying goal.

Special teams success has been a pillar of what has made the Kings effective this season, and look to that unit to get back on track with a better-rested team this evening.

Officially Official
With today’s news surrounding the “hot mic” incident in Nashville and on-ice official Tim Peel, Todd McLellan was asked this morning for his take on the situation, and officiating around the league in general –

“I can tell you that the officials that we have, there’s probably no better officials than what we have in the NHL, in comparison to any other sport. I’m not discrediting any other sport, but they officiate a very fast game, they manage it very well. Our staff, our organization, our players, and any other one that I’ve been in, including here in San Jose, have a tremendous amount of respect for them. They have a tough job to do and I don’t feel ever slighted in any of my games from the officials trying to sway it one way or the other. By no means have I ever felt that.”

Game Thread from San Jose is next!