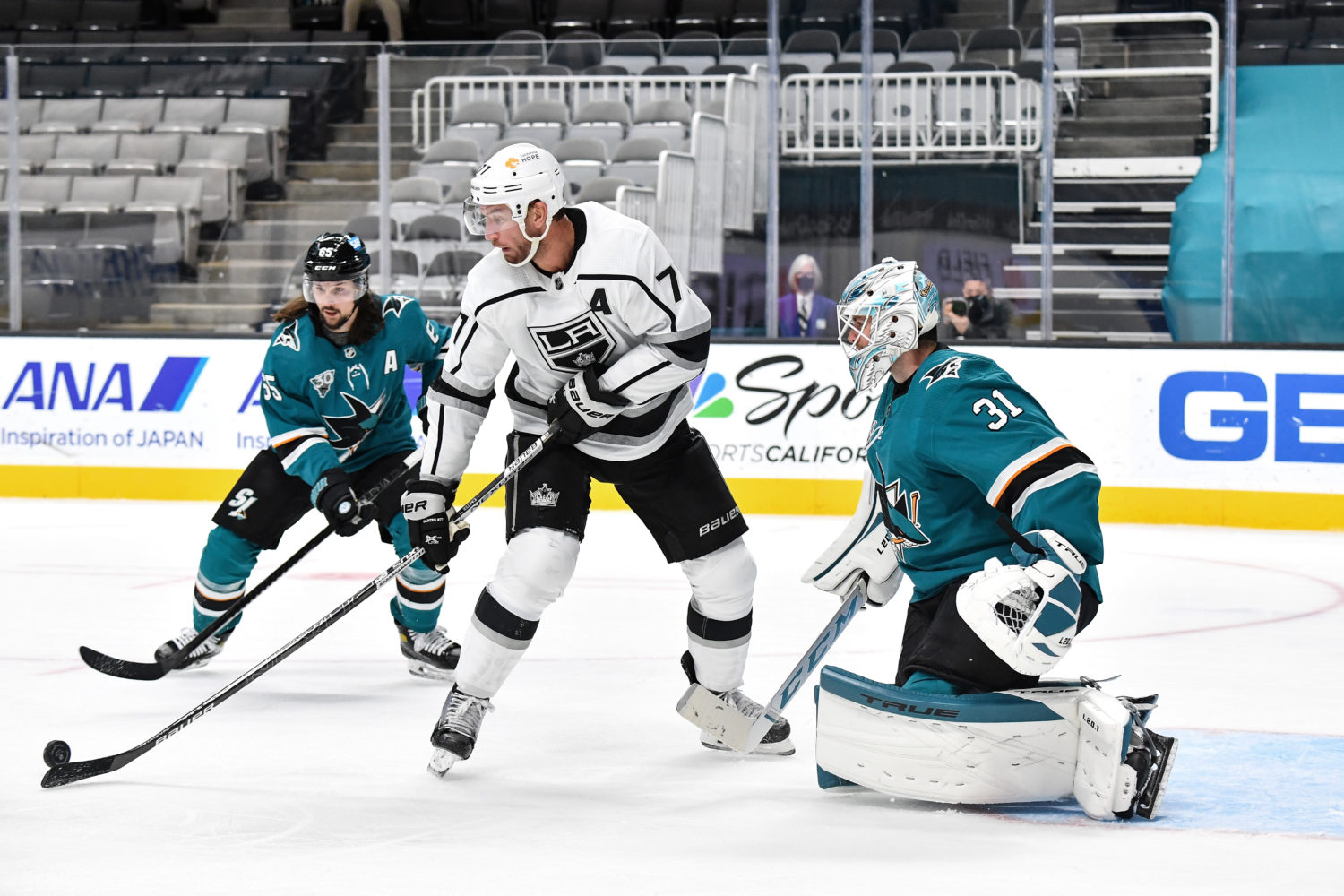 Some night the puck just doesn’t go over the goal line, and tonight was one of those nights for the LA Kings. The Kings tied a season high with 42 shots on goal, and had their looks in spurts throughout the evening, but were not able to get that second goal, in a 2-1 defeat against the San Jose Sharks on Monday evening at SAP Center.

It wouldn’t be fair to say that the Kings played poorly, they didn’t, but at the same time, they weren’t clinical in the offensive end either. The quantity of chances was vastly superior to their opponent, but they were not able to put enough home to either force overtime or earn the win.

Despite three chances on the power play for the Kings in the opening 20 minutes, it was San Jose that came away with the only goal of the first period. Logan Couture, stationed along the left-wing boards, sent a shot on goal that ricocheted off of Jonathan Quick’s glove, off of Kurtis MacDermid, and in for the game-opening goal. Tough hop, as the Kings conceded first for the 20th time in 31 games played this season.

The visitors began to create more shots on goal in the second period, and finally broke through late in the middle stanza, as Matt Roy wired home a shot from the right point. All three forwards did their job on the play, with Gabriel Vilardi winning the faceoff, Austin Wagner retrieving the puck and feeding the point, and Blake Lizotte getting in the goalie’s line of sight to provide traffic.

After the Kings had a couple of good looks, including a power play, early in the third, San Jose took back its one-goal lead after Ryan Donato sent a wraparound effort off a Kings skate and into the net for the 2-1 advantage.

Los Angeles had several opportunities down the stretch, including a post hit by Anze Kopitar, and an open net that Jeff Carter and Kopitar were unable to connect on, with Martin Jones finishing with 41 saves against his former team. One of those nights where that crucial goal did not come. Carter led all skaters with seven shots on goal, while Alex Iafallo had six, with 3-4 coming from those good areas on the ice.

Perhaps a result the Kings will look back on with disappointment, considering the Vegas Golden Knights did them a favor with a win over St. Louis. It wouldn’t be for lack of effort, or even a bad performance, but a missed opportunitiy nonetheless.

Hear from the man of the night, Matt Roy 🏒⤵️#GoKingsGo | @LAKings pic.twitter.com/NAIO0iGRJS

On generating more quality looks when the power play isn’t as sharp as usual
I thought we did that tonight, to tell you the truth, it just didn’t go in. It wasn’t in waves, but every now and then we’d get a good, Grade-A opportunity, and we just didn’t find the net. We hit a post, we had an open net at the end, even with 0.2 seconds left, we’re staring at the goaltender and couldn’t get the puck up. I thought, as a whole, if there’s two areas where we fell short it’s obviously the power play, yet we had some looks there, we just didn’t have a lot of polish on it, and faceoffs. We can whine about that a little bit, but yet a faceoff got us our lone goal. I thought our group played pretty well, we didn’t give up much, both [SJ] goals go in off of one of our players. Sometimes, it’s not your night, yet you put in a pretty good effort. We’ve got to get some rest, I thought we looked a little tired as the game went on, and be ready to play in a couple days.

On getting goals from defensemen other than Drew Doughty in back-to-back games, and if more shots from the point has been a point of emphasis
Yes, at the right times, and the shot selection with people in the net front, yeah. Sometimes, the D don’t score, it’s not because they’re not shooting, but we’re not in the eyes, or not making it hard on the goaltender from distance. I know there’s been some talk about the lack of offensive production from our d-man, but they do create opportunities by getting the pucks there, and they’re not always the ones scoring, but they do create.

On the message to the team when you’re close but just not capitalizing
Just hang in there, there’s not much that we can say there. The players are bright enough to know that what they’re doing is creating shooting opportunities, and scoring chances. There will be a night where it just goes in for us, and all of a sudden there’s 4 or 5 on the scoreboard. There’s other nights, in a 56 or 82 game season, where you’ve done everything you can and it just doesn’t get across the goal line. Sometimes the goalie makes a good save, sometimes you’re a little too anxious to get the shot off, or you wait a little bit too long, ice conditions, puck was bouncing around a lot at the end. There’s no magic answer for that question, it just didn’t go in today.

On putting this one behind them
We’re beyond this game already, we’ll prepare for the next night, we’ll look at things we did well, things we didn’t do well, adjustments we may need to make. Positionally, we were in the right spots on a lot of those, both of those [goals against], and it goes off of somebody’s skate, off his leg, off a shinpad and there’s really nothing we can do about it. If we sit here and stir about it, it’s not going to help us one bit. Again, it’s just the way it goes. It was an odd night in our end, it was an odd night in their end.

– The Kings made it eight straight games without allowing a power-play goal, as they killed off both San Jose opportunities on the man advantage. At 85.4% on the season, the Kings rank fourth in the NHL in penalty-kill percentage this season.
– Defenseman Matt Roy scored his first goal of the season, giving the Kings defensemen in back-to-back games who scored their first goal of the season (Sean Walker yesterday).
– The Kings tied a season-high with 42 shots on goal, as they recorded 35+ shots for the fifth time this season.
– Forwrard Austin Wagner collected his fourth assist of the season, while forward Gabriel Vilardi collected his seventh.
– The Kings did not score a power-play goal for just the third time in their last 12 games, despite having five-or-more chances for just the seventh time this season.

The Kings are scheduled for an off day tomorrow in San Jose. The team will return to the ice for morning skate on Wednesday at SAP Center.

Kings vs. Kings is in the books, beginning a stretch of five games, or game-like activities such as today, in

WHO: Team Black vs. Team White WHAT: Kings vs. Kings Showcase WHEN: Sunday, September 26 – 3:00 PM WHERE: Toyota Arena - Ontario,