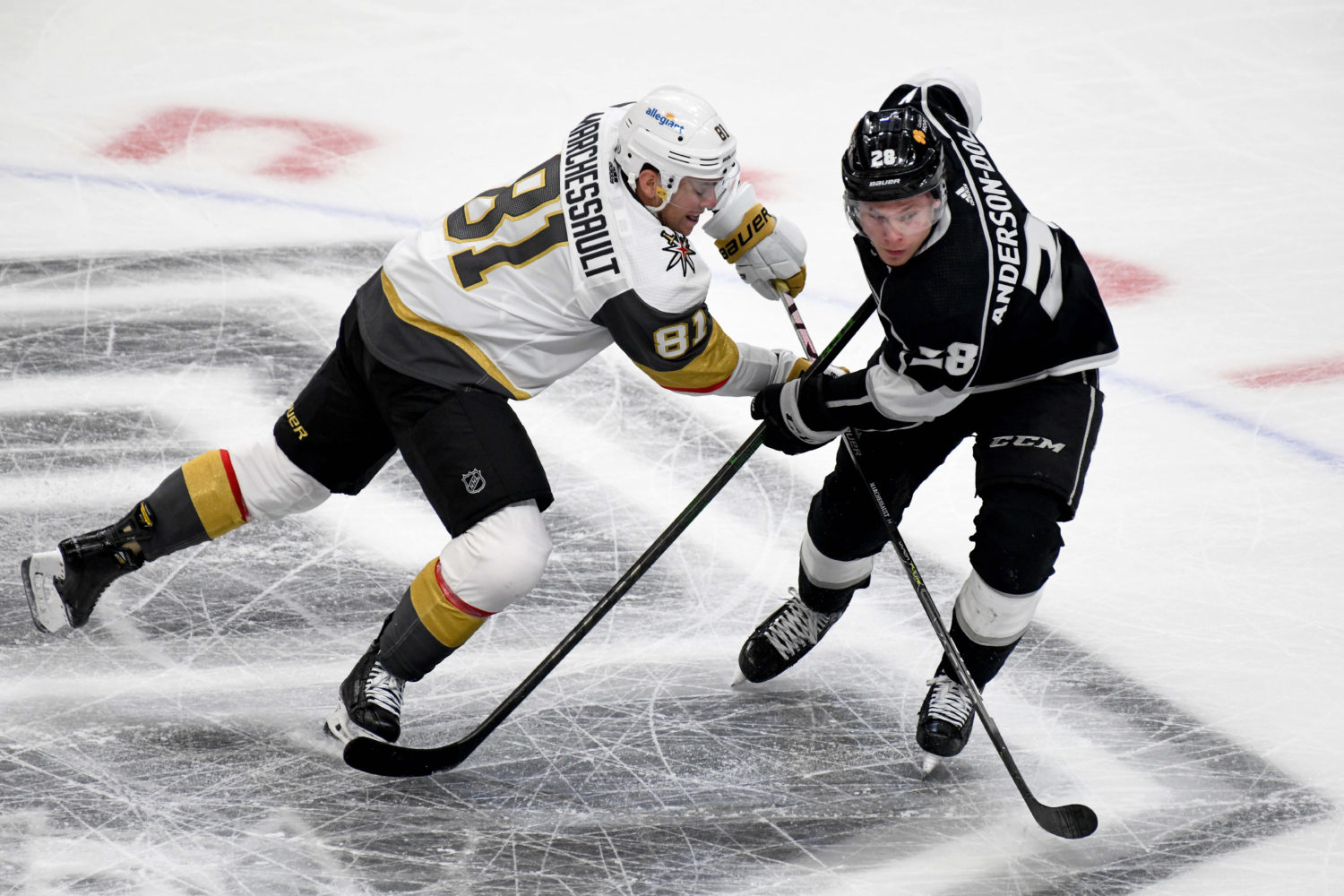 After Friday’s game against Vegas, Todd McLellan felt that the Kings showed the NHL’s second-best team by points percentage too much respect at the start of the game and disrespected what his group can do.

Sunday, the players seemed to have received the message.

The Kings started the game aggressively, showcasing many of the qualities that have made them successful this season. Rather than wait for something to happen, the Kings went on the front foot for much of the first 40 minutes. The line of Carl Grundstrom – Jaret Anderson-Dolan – Trevor Moore was relentless in forcing turnovers all over the ice, a mentality the team seemed to share. Though the Kings did not score in the first period, they also didn’t concede, and set the tone for the latter stages.

Los Angeles got two goals in the second period, which would prove to be enough to hold off a Vegas offensive onslaught in the third period, to earn both their first win of the season against the Golden Knights, as well as a split from the two-game set at STAPLES Center.

For a lot of reasons, Sunday’s game felt like an especially important one. Staring down the thought of being swept at home, which would have been the team’s second consecutive sweep in two-game sets against the division’s elite, wasn’t a thought the Kings wanted to face.

On night one, the Kings began on the defensive off the opening puck drop, as Vegas imposed their game with two early goals, before the Kings found their footing. Sunday was a different story, as the Kings played their brand of hockey for much of the opening two periods, before holding on in the third to close out a big win over a very good hockey team.

“It felt a little bit different on the bench tonight,” McLellan said, after Sunday’s victory. “In the start the other night, I think we waited for something to happen, it did, and then we got going again, we tied it up and then we waited again. Tonight was different, and I thought we played a really good 40 minutes and then we knew their push was coming.”

Slow starts aren’t anything new for the Kings, and they’re not something the team hasn’t overcome this season. After conceding twice on Friday, the team effectively bounced back with the next two goals to tie the game, but mistakes made in execution, and defensive zone turnovers, cost them two more goals that they could not answer.

Sunday’s game was significantly cleaner. You’re not going to simply keep a team like Vegas from getting offensive opportunities. But what you can do, is make sure that as few of those opportunities as possible come off of your mistakes. In game two on the weekend, that is something that the Kings did a much better job of.

“That was a big focus coming in,” Anze Kopitar said. “I don’t think they got too many chances off of our mistakes. Obviously, we gave up a goal off of our mistake, but we’ll learn from that and we’ll try to cut them down as much as we can.”

With the win, the Kings also prevented an 0-4 start to the season versus the Golden Knights. Head-to-head records, especially against the team that is currently at the top of the division, aren’t nearly as important in the playoff picture as simply earning points, but it certainly serves as a measuring stick for this group to be able to beat Vegas, and beat them by playing a game the Kings know they can be successful with.

McLellan was perhaps most pleased with Sunday’s win being a full-team victory, not a game where they were dragged to a victory by one player, or a few individuals. A full-team effort.

“For the most part, it was a real good team game,” he said. “All four lines, five defensemen, certainly the goaltender participated. It’s nice to win that group game rather than an individual game sometimes.”

That’s not to say that individuals weren’t very good, though.

Kopitar had three assists across the two games, and his second on Sunday gave him points on 16 of the team’s prior 30 goals. In that 11-game span, the only game that Kopitar didn’t have at least one point was the game the Kings were shutout in Colorado, with five multi-point games in that stretch. Kopitar’s all-around play has remained as consistent as ever, and his staggering offensive totals continue to remain amongst the NHL’s elite.

Down to five defensemen on Sunday, with Olli Maatta leaving the game early with an injury, others were forced to step up. Look no further than Matt Roy, who shattered his NHL career-high for minutes played, logging 26:00, behind only Drew Doughty. Faced with a 5-on-3 scenario early in the third period, and Doughty in the penalty box, Roy played all 91 seconds down by two men, as well as 1:55 of Doughty’s two-minute minor, as the Kings got a successful kill to maintain their two-goal advantage.

The Michigan-born defenseman earned a three-year contract extension on Sunday morning, and performances like he had later in the day are a big reason why. As Roy continues to grow and evolve as a player, his presence as a member of the team’s secondary core will be essential, providing support along with Sean Walker, behind Doughty on the right side of the blueline.

Jeff Carter scored a really important goal on Sunday. Trevor Moore scored a goal on Friday. Gabe Vilardi created a goal on Sunday, the same way that Roy created one on Friday, by getting a good shot through from the point, which led to another player capitalizing.

It feels as if the Kings are as deep at forward right now as they have been all season. Continuing to get production, and good shifts, from all four forward lines will be crucial down the stretch, to remove some of the pressure off of the Kopitar line.

The team now faces the challenge of a back-to-back in different cities for the first time this season. The afternoon game on Sunday certainly helps to lessen the fatigue factor a bit, but the Kings meet an opponent in San Jose that was off yesterday and did not travel. That certainly creates a disadvantage for the Kings, but there’s no time to lose, with every two points up for grabs, especially against team behind them in the standings, being extremely valuable.

Lots more to come here on LAKI throughout the day, with the game preview from San Jose up next.