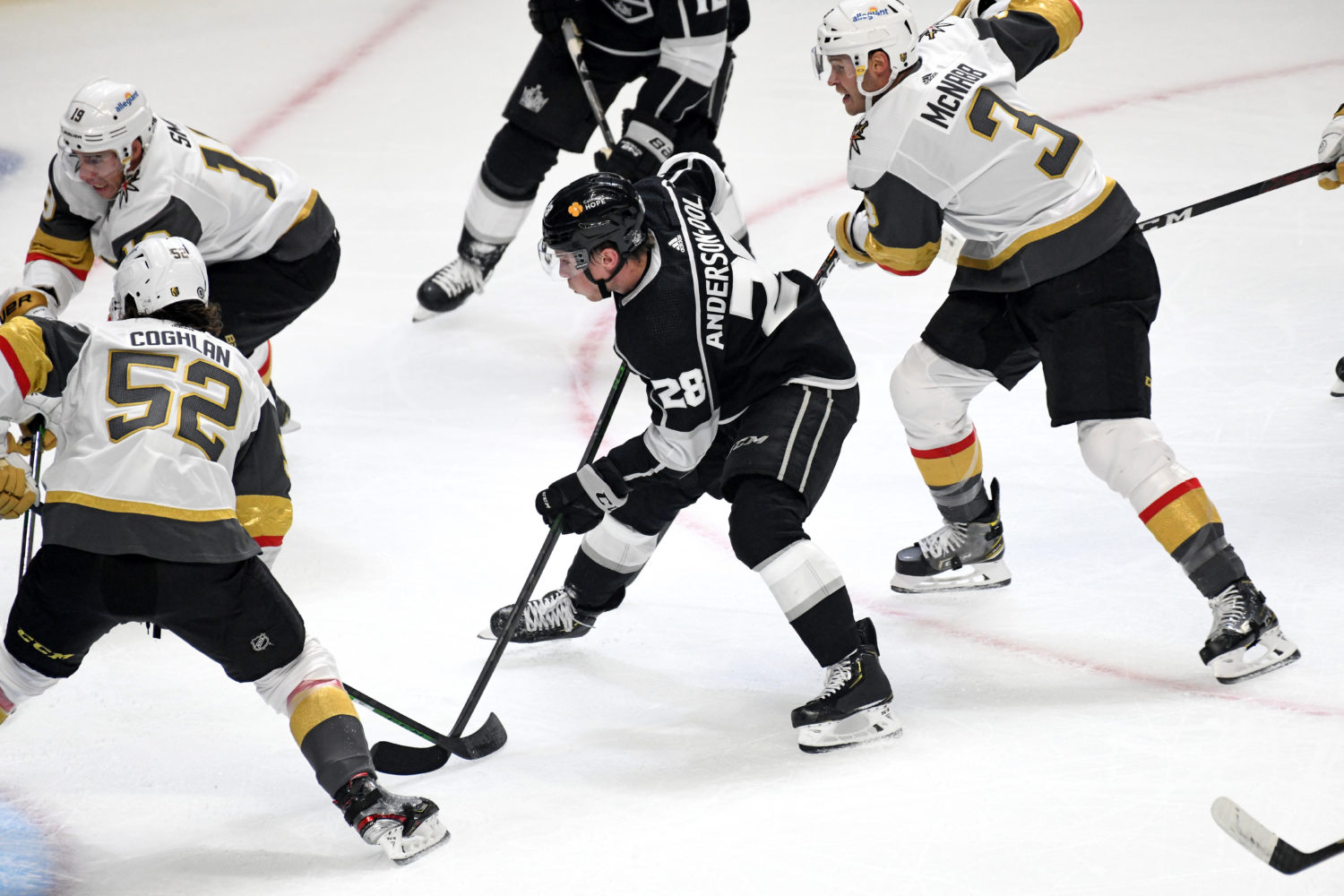 TONIGHT’S MATCHUP: The Kings and Golden Knights conclude a two-game set this afternoon at STAPLES Center. Vegas has won each of the first three head-to-head matchups so far this season, including Friday’s game by a 4-2 margin.

KINGS VITALS: Considering the afternoon puck drop, the Kings did not hold a morning skate ahead of today’s game. Yesterday’s full-team practice featured all skaters and goaltenders on the active roster.

Yesterday, Todd McLellan reinforced the importance of playing both goaltenders in a crowded stretch of games, and with three games in the next four days, expect to see Jonathan Quick and Cal Petersen rotated moving forward. With that in mind, and considering Quick’s start on Friday, it wouldn’t be surprising to see Petersen return between the pipes today at STAPLES Center.

“It’s certainly something that we believe in, we just play so many games in so few nights,” McLellan said of the split with Petersen and Quick. “If you don’t have two goaltenders that can take the net and perform at a high level, I think you’re in trouble. Right now, we have two, we want to keep them fresh, keep them rested. Some of the nights that they’ve had here lately, Cal in particular, have been pretty taxing, a lot of shots on goal. Having Quickie healthy is a real good thing.”

That quote did not give us an insight into who will start tonight, but it confirms that there is still a timeshare situation in place. If Petersen gets the nod, after Quick played on Friday, he has excellent career numbers against the Golden Knights. From four career appearances, Petersen is 2-1-0, with a .929 save percentage and a 2.47 goals-against average. On the season, Petersen ranks tied for seventh in the NHL with a .922 save percentage, and ranks inside the league’s top ten in several categories, including goals saved above average, goals allowed adjusted and goalie point shares.

On Friday, the Kings utilized an alignment that featured 11 forwards and 7 defensemen, with Dustin Brown and Kurtis MacDermid replacing Matt Luff and Austin Wagner in the lineup. With that in mind, and McLellan saying yesterday that we might see more of that look moving forward, we won’t know exactly what the lines will look like until warmups later on today.

Yesterday’s practice implied we would see the Kopitar line and the Anderson-Dolan lines remain in-tact, but the bottom six could go a variety of different ways, including being just a bottom five as it was on Friday.

GOLDEN KNIGHTS VITALS: Goaltender Robin Lehner returned to the net on Friday, after he had missed the team’s previous 17 games with a concussion. As such, expect to see Marc-Andre Fleury in net this afternoon. Fleury stopped 27 of the 29 shots he faced in his lone start versus the Kings this season to date, and is 10-6-4 versus the Kings, with a .921 save percentage and a 2.40 goals against average in his career versus Los Angeles.

The veteran netminder is tied for the NHL’s best save percentage so far this season at .933, as he ranks second in the NHL with four shutouts, while his 1.87 goals against average ranks third best. Fleury had been the goaltender of record for the Golden Knights in 16 of their last 17 games prior to Lehner’s start on Friday.

Here’s how Vegas lined up on Friday –

Speaking with Drew Doughty yesterday, he didn’t indicate one specific thing that he noticed with regards to Vegas being as good as they are. Perhaps that’s what makes them so effective. Friday’s win over the Kings was a different style of hockey than they won with on home ice in February, but they felt equally effective. A challenging opponent for sure.

“They’re just a really good team, I don’t know what the do differently, they just play well in all systems, all places on the ice,” Doughty said. “They’re fast at moving the puck, they’re fast with their legs, they haven’t really been together for that long, but it seems like they’ve been together for 10 years sometimes, the way they move the puck. They make blind passes, that aren’t necessarily blind, they know where each other are, and they’re a tough team to play against.”

One main difference, in the minds of the Kings, from what Vegas did in its own end and what the Kings did was the level of difficulty it took to get to those dirty areas around the blue paint.

From McLellan’s perspective, the Kings did not make it difficult enough on the opposition to get to the dirty areas on the ice, and that’s something they’ll need to work on doing today, to have more success.

“I look at the four goals they ended up with and they happened in and around our paint,” he said. “We were very poor in about 40 square feet of ice in front of our net. Whether it was tip-ins, deflections, pass-outs from below the goal line, just loose, sloppy…at the other end, it took a lot to penetrate that area. They played tighter, harder, heavier in that area.”

In their own zone, Vegas did a good job at making it difficult on the Kings to get into those more dangerous areas. Alex Iafallo’s goal was a good example of what can happen when the Kings did get near the blue paint, but those opportunities, throughout the evening, weren’t easy to come by.

Forward Jaret Anderson-Dolan said that it just a matter of continuing to work hard, and winning those 1-on-1 battles. More wins in that department should lead to more success.

“They’re just all-around their net, their defensemen are hard on sticks, we had a couple chances that were just lying there but their d-men do a good job at getting under sticks and making it tough,” Anderson-Dolan said. “That’s hard on us as forwards, when [our defensemen] are getting pucks there and they’re lying around, but we’ve got to find a way to win those battles and put a couple in.”

Anderson-Dolan, in his short sample size so far, has been a player who has found some success in getting into those areas, and winning those battles. Though not the biggest or strongest player on the ice, he feels he can still use his body effectively, along with competitiveness and desire.

“For me, it’s getting low and being strong,” he said. “Obviously not the biggest guy out there, so it’s using my weight smartly, I’m not really going to outpower anybody, especially some of those bigger defensemen. It’s about body position and it just comes down to being competitive. I’m still working on that, and I think I can win a lot more loose puck battles. It comes down to who wants it more at the end.”

The Kings announced this morning that they have re-signed defenseman Matt Roy to a three-year contract extension, that carries an AAV of $3.15 million per season.

Roy is the classic example of why seventh-round picks are important. He worked his way from a late-round pick, to an AHL standout, to a solid, NHL defenseman, in the span of just a few seasons. A great story of a player who has earned his first full one-way NHL contract, and a great move for the Kings, who now have the right side of their blueline locked up for the next three seasons with Doughty, Roy and Sean Walker.

Kings and Golden Knights, and the corresponding game thread, coming up next from STAPLES Center.