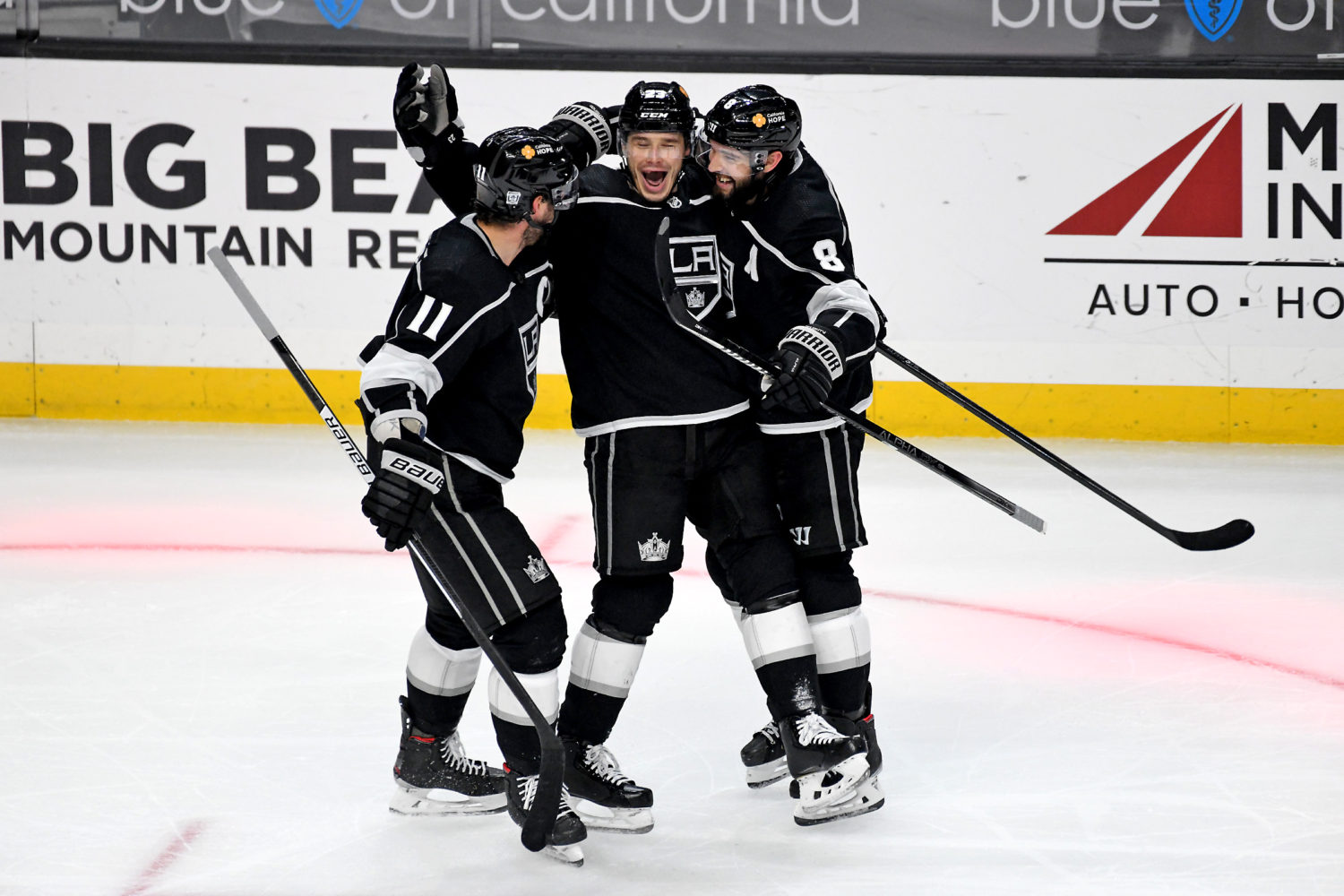 “The most important thing right now is we’re in the mix. We’re there, we’re swinging with the big boys. We’ve earned the right to be respected around the league, I know teams describe us as hard to play against, and structured, and those are compliments we’re happy to receive, yet with respect, comes responsibility and the games are just harder. We don’t see a lot of backup goaltenders anymore, we see the number ones starting against us. I think individuals are growing as we move forward. There’s still a lot of learning to do – there’s skill development and then there’s game management. The skill part I think we’re getting, the game management for some of our younger players is still coming. They’ve got to understand where we are in a game, and what we need to do, and that’s all part of experience. For the most part, it’s been a positive first half.”

That is how Kings Head Coach Todd McLellan described where he feels his team is at, with now half of the 2020-21 NHL season in the books. With Wednesday’s 4-1 victory over St. Louis, we have officially reached the 28-game mark of the season, the halfway point in the shortened campaign, and the Kings sit two games over .500 at 12-10-6.

By many standards, the Kings have surpassed the expectations of those the outside world had set up for them. Many had the Kings battling to get out of the basement so far this season in the West Division, likely fighting it out in the Battle of California for the right to finish sixth. That was not, however, the expectations inside the walls here in LA.

The Kings, internally, had a goal of making the postseason. Many scoffed, some laughed, but the team has put itself in a position to make a run down the stretch. It’s far from a guarantee, there’s nothing set in stone, but the Kings are in the hunt, and that’s exactly where you need to be with less than 30 games left on the calendar.

The season has featured several ups and downs. Some people wrote the season off at the end of a five-game losing streak, which occurred with several lineup regulars missing due to a variety of different reasons. Things were turned around with a six-game winning streak, as the narrative of a group of veterans with a championship-pedigree gelling well with a group of young, exciting, up-and-coming players formed the core of a team that was turning some heads on a national level.

Ever since, the Kings have floated perhaps in between those two extremes, but have found themselves firmly out of the bottom of the division, though with some work yet to do to reach the Top 4.

So far, the Kings have nearly finished their scheduled games against both Minnesota and St. Louis, playing 14 of a combined 16 head-to-head matchups. On the other hand, they still have six games remaining versus both Vegas and San Jose, as well as five games apiece versus Anaheim and Arizona.

Here’s a look at some of the statistics the Kings have posted through their first half of season, as well as some observations.

3 To Look Back On

Veteran Scoring – How’s this for your leaders being your leaders?
– Anze Kopitar: At the time of this article, forward Anze Kopitar is tied for eighth in the NHL in scoring, and is tied atop the West Division in points. Kopitar’s 26 assists are fifth-most in the NHL, and lead all West-Division players. In terms of power-play points, Kopitar’s 20 trail just Edmonton’s Connor McDavid, while his 17 power-play assists lead all skaters leaguewide.
– Dustin Brown: Though he has missed the last two games with an upper-body injury, Brown continues to lead the Kings in scoring, with his 13 goals this season tied for 15th in the NHL, and tied for third-most in the West Division. Brown’s seven power-play goals are tied for fifth in the NHL, and are two more than any other player in the West Division.
– Drew Doughty: While playing against the other team’s top players each night, Doughty has also thrived offensively, with his 24 points ranking sixth most in the NHL amongst defensemen. Doughty’s seven goals are tied for fourth, while his five power-play goals and 15 power-play points are second most amongst blueliners.

Solid Goaltending
– The goaltending tandem of Cal Petersen and Jonathan Quick has kept the Kings in nearly every game this season, even games in which the team has been outplayed. If you’re looking for one parallel between the hot streak the Kings ended on last season, and the way the team has played this season, it’s the strong goaltending.

At .915, the Kings hold the NHL’s sixth-best save percentage as a team. Petersen ranks amongst the NHL’s league-leaders in save percentage this season, while Quick, minus just a couple of starts that have skewed his numbers, seems to be operating back to form. The tandem split has worked so far, and will be crucial down the stretch with Quick now healthy again.

Strong Special Teams
– We touched on the special teams element here, but the Kings rank inside the NHL’s Top 10 in both power play and penalty kill this season, one of just three teams that can say that.
– In terms of power-play goals scored, just three teams have more than LA’s 26, while just three teams have allowed fewer than the 13 the Kings have surrendered. The Kings current PP% of 25.7% would be their highest in a season since 1980.

Point, Not Points At Home
– The Kings have won just 5 of 12 games on home ice, but also have points from nine of 12 home games, for a 5-3-4 record in total)
– Looking at some of the defeats, the Kings held third-period leads in four of those seven games, conceding two-goal leads against Minnesota in the first two games of the season, and goals in the final two minutes in games against St. Louis and San Jose.
– The three regulation defeats included two one-goal losses, and a two-goal loss with an empty netter. The Kings have been in every single game at home, and converting more of those types of games into victories will be key with 16 of the final 28 games at home in the second half.

Possession Figures
– How much emphasis do you put on advanced stats, and which ones do you put the most stock in? The Kings rank towards the middle of the NHL in terms of Corsi, though last season, they were in the NHL’s Top-5.
– Additionally, however the Kings rank in the league’s bottom five in terms of percentage of scoring chances and high-danger chances for.
– Despite those figures, the Kings rank right around the 50/50 mark in terms of goals scored and conceded in those two categories (-1 and +3 respectively). So, while the team has allowed more of those types of opportunities than they have had, it has not resulted in more goals against.

Slow Starters
– Despite yesterday’s three-goal output in the first period, the Kings have been one of the slowest starting teams in the NHL. The Kings have conceded the second-most goals in the NHL in first periods this season, while their 19 goals scored are the seventh-fewest in the NHL.
– With a -13 goal differential in the opening period, the Kings rank fourth to last in the league in that statistic. Additionally, the Kings have scored the first goal in just 10 of the 28 games played this season, though they have posted a 9-1-0 record in those games. The Kings have also earned a point nine times this season when conceding the game’s first goal, tied for fourth-most in the league. The moral of the story – scoring the first goal results in a lot more wins for than against! 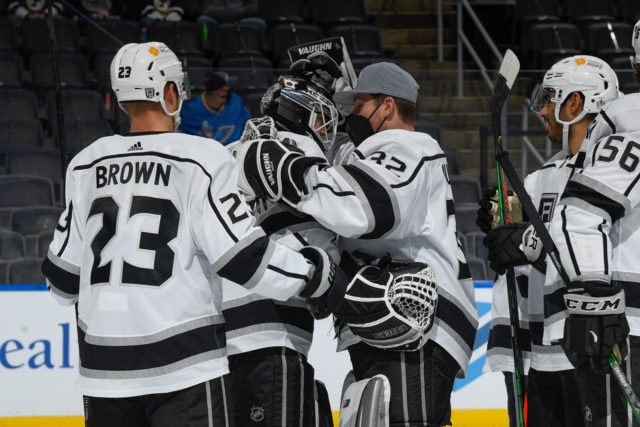 When at their best, the Kings have shown an ability to string together games and wins. When everyone available to them is available, the team has found more success than it has failures. With just Dustin Brown currently out of the lineup, and his status being just day-to-day, rather than longer-term, the Kings look to keep things going with a mostly in-tact group.

The Kings will play 16 of their final 28 games on home ice at STAPLES Center, and 16 of their 28 games against teams currently behind them in the West Division standings. These games might just be the keys to making a push for the postseason.

The second half of the season starts out with a bang tonight, as the Kings host the Vegas Golden Knights for the first time this season. Vegas won both meetings on the strip in early-February, and the currently top-seeded Golden Knights will present a challenging matchup for the Kings over the next three days. 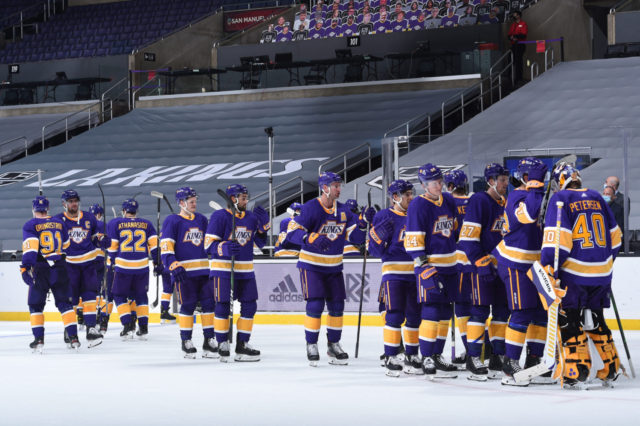