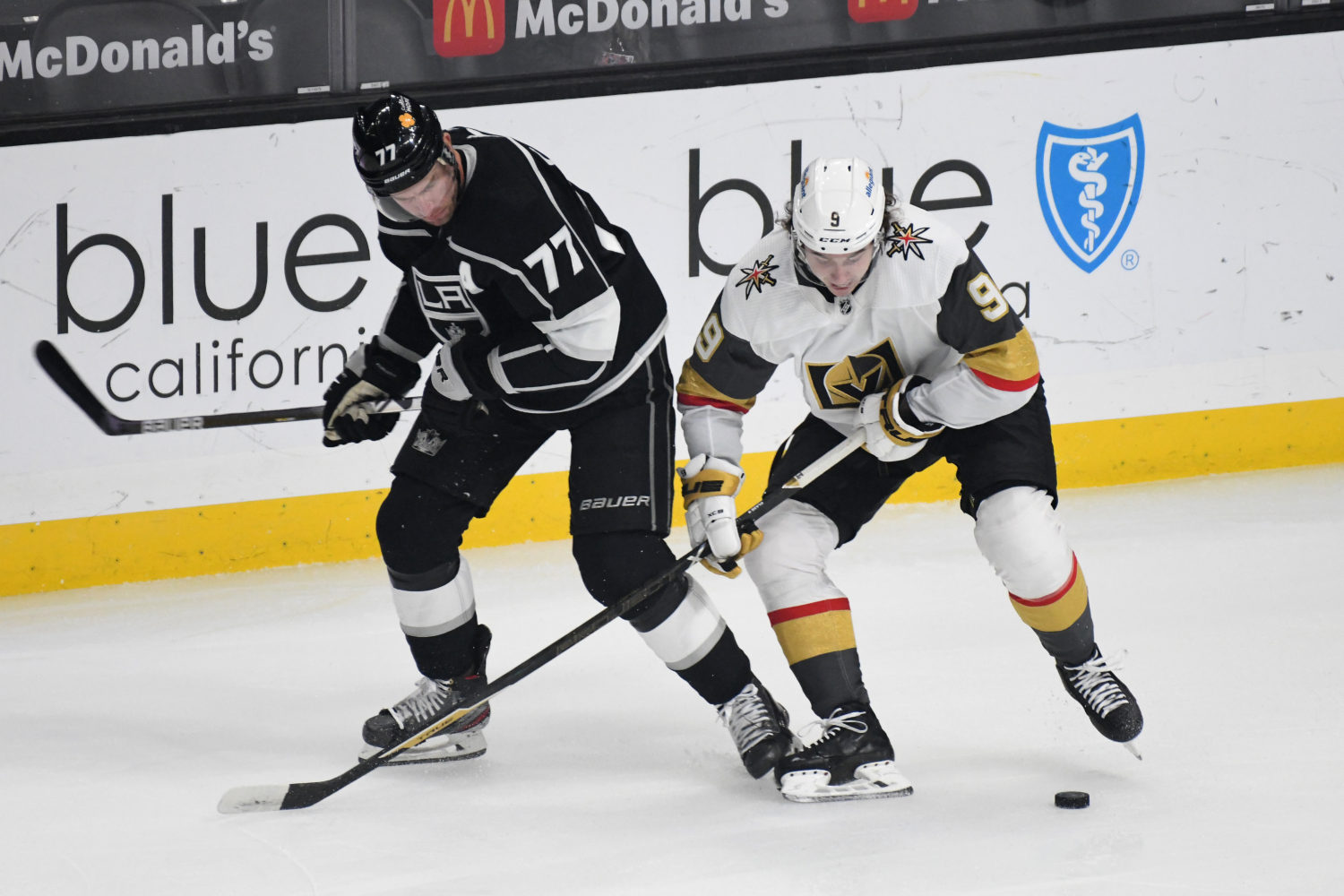 The LA Kings corrected many of the issues that plagued them earlier this season against Vegas, but found themselves with too many turnovers in their own end, leading to goals against, in a 4-2 defeat against the Golden Knights.

Max Pacioretty struck twice in a span of less than three minutes, his division-leading 15th and 16th goals of the season, to put the visitors ahead by a pair in the opening period. Both plays began with the puck on a Kings stick that did not clear the zone, eventually resulting in a goal for 67 in white.

Starting down another multi-goal deficit, the Kings got a response late in the first, as Alex Iafallo crashed the net and buried an Anze Kopitar rebound to cut it to a one-goal game at the intermission.

After a back-and-forth start to the middle stanza, forward Trevor Moore scored for the second straight game, as he redirected a Matt Roy shot from the right point past Robin Lehner, to even the game at two. Moore now has five points from his last six games played, and continues to thrive on a line alongside Carl Grundstrom and Jaret Anderson-Dolan.

After Vegas got a goal late in the second period, a William Karlson deflection, following a won offensive zone faceoff, the teams played a deadlocked opening half of the third period, with the best chances for the home team coming on a mid-period power play. The Golden Knights, however, re-gained their two-goal lead soon thereafter on another redirected goal, this from William Carrier, to pull ahead 4-2.

Of the four goals allowed, three came off the sticks of Kings players, while the other, as McLellan addresses below, came off of faceoff coverage in the defensive zone. Much better tonight from the Kings than in the games in Vegas back in early-February, but some things to clean up as well.

Hear from Iafallo, Matt Roy and McLellan after tonight’s game.

On how the team played defensively tonight
I mean, I think we could have done a better job. They’re a good team and they make a lot of skilled plays down low, but I think as a team, we could have done better with ending some plays and getting some sticks on some of those passes.

On handling Vegas’ rush better than the team did in the game on the road
It’s something that we talked about before the game, they’re a good team off the rush, so we wanted to make sure that we had our guys, we were sorting things out. For the most part, I think we did a decent job of that tonight.

On his assist tonight, and getting more pucks towards the net from the blueline
The d-core as a whole, we need to find a way to start producing offensively. I think we’re all trying to get pucks to the net somehow, or shoot them wide and hopefully get a tip, start creating something off of those.

On what he was most encouraged with from tonight’s game
Like usual, we take a punch or two to the face and then we get ourselves off the mat and we continue to battle. That’s in our game, that’s in our DNA, but that’s a moral victory. I think we’re a better team than we played tonight, I think we showed them a little too much respect and disrespected what we’re capable of doing. There’s things that we have to improve on, we’ll work on it tomorrow, and hopefully we’ll have a better [game] on Sunday.

On if tonight’s game felt more lopsided than the score
Well, I look at the four goals they ended up with and they happened in and around our paint. We were very poor in about 40 square feet of ice in front of our net. Whether it was tip-ins, deflections, pass outs from below the goal line, just loose, sloppy…at the other end, it took a lot to penetrate that area. They played tighter, harder, heavier in that area. With that being said, we got some good saves from Quickie when we needed them, we played hard enough and long enough to stay in the game, but just loose enough to lose it. Let’s put it this way, this doesn’t match the first game in Colorado, where we would have absolutely stolen it, but the better team won tonight. We were the second-best team for sure.

On the goals against tonight coming down to individual mistakes
Yupp, faceoff coverage was horrendous. Clearly went through it before the game. Responsibilities, and some responsibilities for certain positions haven’t changed in a year and a half since we’ve been here. It’s time to understand what you need to do in those situations and get them done. It’s unacceptable if you’re giving that up right now. The others, turnover on the fourth goal, get it off your tape and move it, let’s get going. I can go through a bunch of different plays through the night, but the individual always makes the mistake, the team usually pays for it. That’s how the game goes. No one’s perfect and it’s a tough game to play when you’re under pressure.

McLellan added that the 11F / 7D alignment was a coaches decision, not an injury-related decision.

– Anze Kopitar now has points in nine of his last ten games, the last nine games the Kings have scored a goal in. Kopitar’s helper was his 27th of the season, moving him into sole possession of fifth in the NHL this season.
– With a first-period assist, Drew Doughty now has 10 points (3-7-10) from his last nine games played. The assist was his 25th point of the season, ranking sixth amongst defensemen this season.
– With his first-period goal, forward Alex Iafallo now has points in three straight games, and four points over his last four games played (2-2-4).
– Forward Trevor Moore scored for the second consecutive game, and now has five points (2-3-5) from his last six games played.
– Goaltender Jonathan Quick returned to action for the first time since March 6. Quick, who missed five games in that stretch due to injury, made 29 saves on 33 shots.
– The Kings were perfect on the penalty kill for the sixth-straight game, killing off both of Vegas’ power-play chances. This season, the Kings are 70-for-83 on the penalty kill, ranking sixth in the NHL in PK percentage (84.3%). They have only allowed 13 opponent power-play tallies this year, tied for the fourth-least in the league.

The Kings are scheduled to return to the ice tomorrow morning at 11 AM at Toyota Sports Performance Center.