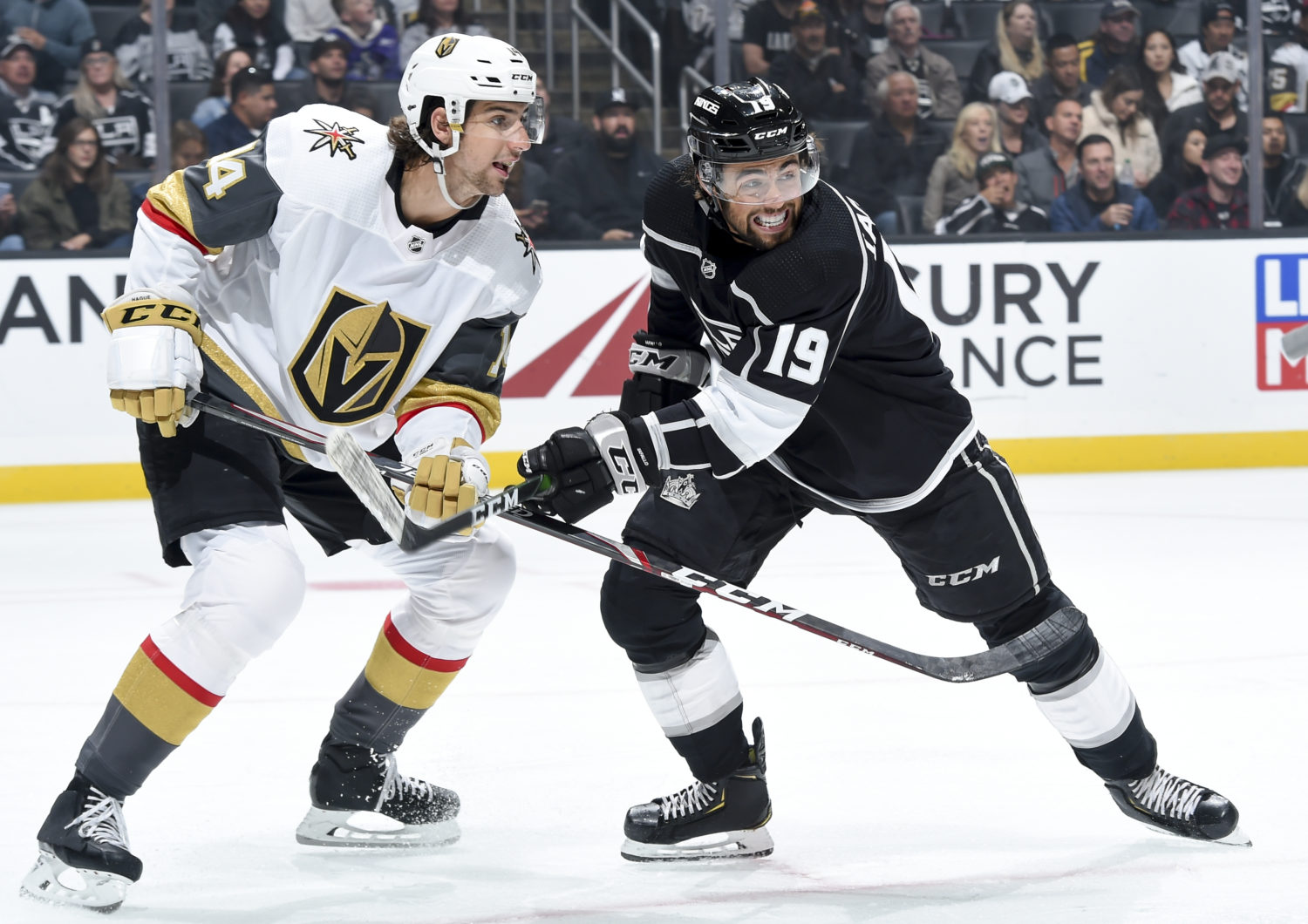 TONIGHT’S MATCHUP: The Kings host the Vegas Golden Knights tonight for the first time this season. The teams open a two-game set this evening, that continues on Sunday afternoon at STAPLES Center.

HEAD-TO-HEAD: Forwards Anze Kopitar (1-1-2), Austin Wagner (1-1-2), Dustin Brown (1-1-2) and Adrian Kempe (1-1-2) lead the Kings this season with two points apiece against the Golden Knights. Brown had a multi-point game on February 5, while the other three collected a point in both games in Nevada in early-February. For Vegas, forward Max Pacioretty leads all skaters with four points (0-4-4) from two games played, while forward Chandler Stephenson has two goals from two games played.

KINGS VITALS: Following yesterday’s full-team practice, the Kings held an optional morning skate at Toyota Sports Performance Center. The Kings had all skaters on the ice, with the exception of Dustin Brown, Jeff Carter and Drew Doughty.

Brown is the team’s lone question mark entering tonight’s action. Brown missed Sunday’s game in Colorado and Wednesday’s game versus St. Louis with an upper-body injury, skated with the team each of the last three days, but did not skate in today’s optional morning skate. McLellan said this morning that there’s a good chance that Brown is back in the lineup tonight.

Brown’s availability for tonight is crucial to projecting how the Kings will line up. Yesterday, Brown was one of six forwards in gray jerseys, with Jeff Carter skating with the forwards in white. With McLellan’s quote regarding keeping the Grundstrom – Anderson-Dolan – Moore line together, something like the following makes sense, assuming Brown is in.

As always though, we wait for the song.

Jonathan Quick returned to the lineup as the team’s backup goaltender on Wednesday. Quick had been out of the lineup since he suffered an upper-body injury against St. Louis back on March 6 at STAPLES Center. Now that Quick is back as an option for the Kings, expect to see he and Cal Petersen resume their goaltending tandem, especially as the Kings play three games in their next four days.

In terms of tonight, if Petersen gets the nod, he has excellent career numbers against the Golden Knights. From four career appearances, Petersen is 2-1-0, with a .929 save percentage and a 2.47 goals against average. If he does get the start between the pipes, it would be the first time in his professional career that he has made four consecutive starts.

If it is Quick who goes, however, he has faced the Golden Knights nine times in his NHL career, posting a 4-4-1 record, a .898 save percentage and a 3.41 goals against average. Quick started once earlier this season against Vegas, and was pulled early in the second period, but it would be tough to pin much of that on him, with all four goals coming on odd-man rushes against.

GOLDEN KNIGHTS VITALS: Goaltender Marc-Andre Fleury has posted the NHL’s best save percentage so far this season at .933, as he also leads the NHL with four shutouts, while his 1.87 goals against average ranks second best. Fleury has been the goaltender of record for the Golden Knights in 16 of their last 17 games, as Robin Lehner has been out of the lineup with a concussion.

In his lone start of the season against the Kings, Fleury made 27 saves on 29 shots to earn the victory. In his NHL career, the 36-year-old goaltender is 10-6-4 versus the Kings, with a .921 save percentage and a 2.40 goals against average.

Lehner recently returned to the team, as a backup, and tonight’s Vegas netminder is still unknown at this time.

The last time the Kings faced Vegas, the speed of the Golden Knights in transition and on the attack overwhelmed the Kings early, as they conceded four goals in the first 21:35. The Kings handled that element much better in their second matchup, two days later, but the first time out was an adjustment for a Kings lineup featured four rookie defensemen.

Vegas has that speed, but as Todd McLellan pointed out, tonight’s opponent has the ability to play the game, and have success, in a variety of different ways. It’ll be up to the Kings to find a way to make it work, with four of their next six games coming versus the division leaders.

“I think Vegas can play fast or slow – They can grind it out in the corners, and in front of the net, but their bread and butter is getting four guys up in the rush and skating through the neutral zone with some pace,” McLellan said. “They defend well, and there’s not really a weakness in their game. That’s why they’re the top win percentage team in the league right now, at this time. It’s a good challenge for us, at this time, we’re looking forward to it, it’s our job to steal as many points as we can from them.”

The Kings made a roster move earlier today, with forward Michael Amadio placed on waivers. This was the first move involving waivers made by the Kings since February 6, when they re-claimed Troy Grosenick from Edmonton.

Todd McLellan offered this on Amadio’s situation earlier this morning –

“It was a decision the organization made. It gives us a little bit of flexibility with the roster as a number of players started getting healthier. You look at JAD coming back into the lineup, Quick, Brown. Not that all of them were on IR, but Marty Frk is also starting to skate. It gives us some flexibility.”

Being placed on waivers is really not indicative of anything at this point. Today’s move does not mean that anything necessarily needs to happen, but it gives the Kings additional flexibility if they want or need it down the road. If he is not claimed by another NHL team, Amadio could remain on the active roster, he could be assigned to the taxi squad or the AHL’s Ontario Reign, and we won’t know exactly what will happen until at the earliest, tomorrow morning.

What Happened In Vegas, We Hope Stays In Vegas

What a lame headline, Zach.

Anyways, the Kings dropped both games at T-Mobile Arena, one by a more convincing margin (5-2) and one that was much closer (4-3). One constant from the 120 minutes of hockey was the speed that the Golden Knights play with, and how they use their personnel to create odd-man situations in their favor.

As McLellan noted earlier, Vegas likes to get extra bodies into the rush, which typically means activating one of their defensemen. There are two schools of thought at defending that, one taken by the Kings defensemen, and another taken by their forwards.

Talking with Olli Maatta, he believes the answer is more based in aggression than playing more conservatively. When he explained why, it made too much sense.

“As a defenseman, you want to keep your gap, you don’t want to give them time,” Maatta said. “If they have time, that’s when they can pull up and wait for the defensemen to join. I think for us, if we can play in their faces, we can cut some of those plays off and go the other way, and I think that’s when we’re at our best.”

Adrian Kempe talked about a need for the forwards to do a better job at covering in the offensive zone, when a defenseman makes a pinch.

Knowing that Vegas likes to go the other way, quickly in transition, and knowing that in-opportune pinches were an issue in the first two games, being mindful of the responsibilities on the forwards is something on Kempe’s mind.

“Definitely in the o-zone, we want to activate our D as much as possible, and it’s our responsibility as forwards to cover for them,” Kempe said. “I think, the last couple of games against Vegas, we didn’t do a very good job, especially early in the game, I think we figured it out a little bit later. If they want to come as hard as possible, if we can keep pucks alive in the o-zone, make sure that we pinch when we have a good chance. If we do so, we need the forwards to cover for sure.”

Maatta’s full interview from this morning is below. Maatta spoke about his return to the lineup, after battling a viral illness in Colorado, as well as his pairing with Sean Walker, and the development of Tobias Bjornfot.

Game Thread is next!