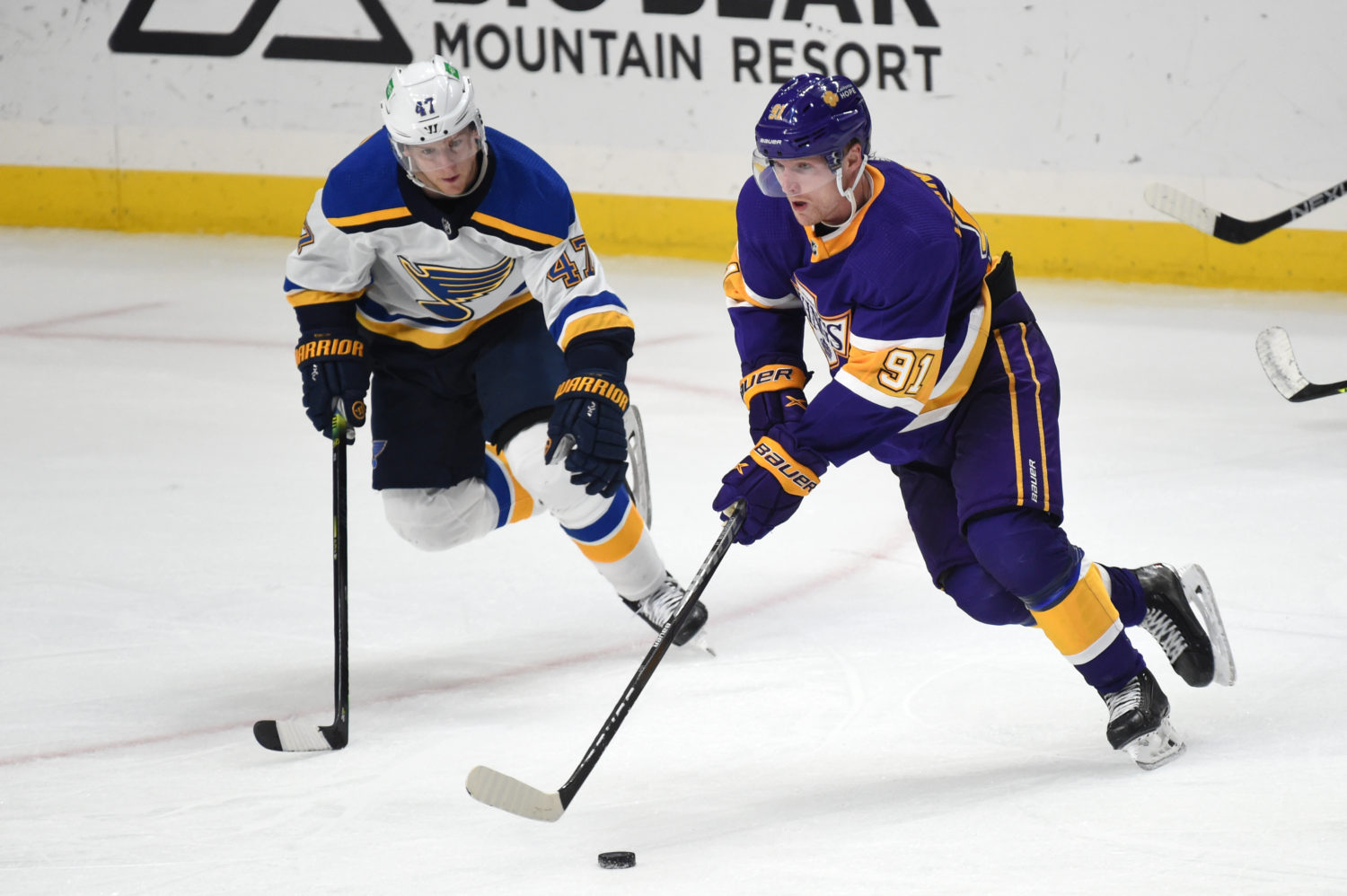 Another game between the LA Kings and St. Louis Blues, another victory for the boys from Southern California.

This is not a bad opponent we’re talking about either. It’s actually a very strong opponent. The Blues opened the season as a team widely regarded as a near playoff lock, and they are a team that currently occupies the fourth and final playoff spot in the West Division. St. Louis is 12-6-4 against the rest of the West Division, but just 2-4-1 against the Kings.

It’s hard to put your finger on anything past “goaltending” as to what that reason is, and it hasn’t been like the Kings have just been carried by their goaltending against the Blues this season.

Goaltending has been excellent mind you – Cal Petersen and Jonathan Quick have combined to post a .928 save percentage across the seven head-to-head matchups – but last night, the Kings had a balanced effort, one that found them some success, especially early on.

Todd McLellan didn’t pin his team’s success versus St. Louis to one specific thing, though he noted the Kings seem to check well versus the Blues and have consistently won the special teams battle, general keys to success.

“I think that we respect them enough that we really rise to the occasion,” he said. “We have checked well against this team, our special teams seem to get us one more than they get a night, which really helps, and we’ve got outstanding goaltending in all of the matches that we’ve played against them. I don’t think there’s anything particular that we’re doing or they’re doing.”

The team checked well, especially in the third period, as they took a two-goal lead and closed a game out, without some of the fanfare that has haunted them in other games this season. They won the special-teams battle, with Drew Doughty’s early power-play goal setting the tone for what was a solid start to the game in a three-goal first period. They also got solid goaltending, as Petersen made 20 saves on 21 shots, and even chipped in offensively with his first career NHL assist.

Powering the way was a strong start, which saw the Kings score two goals in a span of just 58 seconds early on, which allowed the team that entered the evening tied for second to last in the NHL in first-period goal differential (-16) to get an early lead.

Strong starts, or perhaps lack there of, have been a focal point for the Kings throughout the season. Last night was an example of what can happen when they put it together.

“It was emphasized tonight for sure,” forward Jaret Anderson-Dolan said. “In the meetings we’ve had before with St. Louis, it’s whoever’s had the best start is usually coming out on top, minus that one game a couple of weeks ago, but yeah, definitely an emphasis from Todd and the coaches tonight, and I think we did a good job of that, getting in on them right away and setting the tone for the game.”

What we saw from there was a Kings team that got an opportunity to play with a multi-goal lead, and that’s not something that has happened all too often this season. Most games that the Kings have played have been within a goal down the stretch, one way or the other. The Kings have been in it almost every night, but haven’t pulled away on many either.

The St. Patrick’s Day showdown against the Blues provided a unique opportunity, which was how would the Kings play with an early, multi-goal lead, and how would they stay sharp in doing so. McLellan was happy with how his group answered that challenge.

“I think it’s good for us to play with a lead sometimes – Let’s face it, over the last year and a half, it hasn’t happened enough,” McLellan said. “It’s starting to, but a three-goal lead is a dangerous one. You can get casual quick, you begin to get away from your game, which I thought we did a little bit in the second period. The break helped us refocus on what our tasks were as a line, and we began to play more like we needed to in the third. Great experience for us, something we need to do more often, it’d be great to have more 3-0 leads.”

What we also saw from last night’s Kings was an excellent bounce back.

After a pair of games in Colorado that both ended in defeats, with the Kings scoring just once in that span, the team needed to find some scoring, and they got it from a portion of their lineup that had struggled as of late.

Since Jaret Anderson-Dolan exited the lineup with an injury, the traditional bottom six, minus Adrian Kempe, had scored just two even-strength goals over the last 12 games. With Anderson-Dolan back in the lineup yesterday, centering Trevor Moore and Carl Grundstrom, the trio combined for a pair of goals in the first period, with both wingers finding the back of the net and their centerman collecting two assists.

It wasn’t all Anderson-Dolan, but sometimes, certain players play better together than they might as individuals. The whole is greater than the sum of its parts is the cliché. In this instance, though the sample size remains small, those three players seem to elevate the abilities of the others, with all three becoming more productive players when skating together as a line.

“Sometimes things work with combinations of players,” McLellan said. “I thought Grundstrom played one of his better games in a long time tonight, Mooresy’s played quite well. They compliment each other, they have a tenacity, yet a calmness to them that allows them to keep plays alive in the offensive zone. All three of them are fairly well-conditioned, so they can extend shifts a little bit, and it’s just working for them right now. Obviously, JAD’s a real important piece there. They get some confidence when he goes back with them, so we’ll ride that line for as long as we possibly can.”

Continuing to find secondary scoring will be critical for the Kings, if they want to stay in the hunt down the stretch. The Kopitar line, and to a lesser extent the Vilardi line, can’t carry the team night in and night out, and games like yesterday are a good example of the Kings showing that they can find other contributors, and other ways to win, on nights when those lines don’t score at even strength.

As we reach the halfway point of the season, the Kings are in the mix, and that’s exactly where they need to be. Winning these one-off series are great, and as the team gets back to two-game sets upcoming, earning a split or better will be important in keeping the team in a place to make a run in the final stages of the season.

Coming up later today on LAKI, we’ll take a look at the team here at the halfway mark, plus we’ll have notes to come from the team’s practice at TSPC. The Kings sit two games over .500 with 28 games played, and 28 games remaining.

Kings vs. Kings is in the books, beginning a stretch of five games, or game-like activities such as today, in

WHO: Team Black vs. Team White WHAT: Kings vs. Kings Showcase WHEN: Sunday, September 26 – 3:00 PM WHERE: Toyota Arena - Ontario,