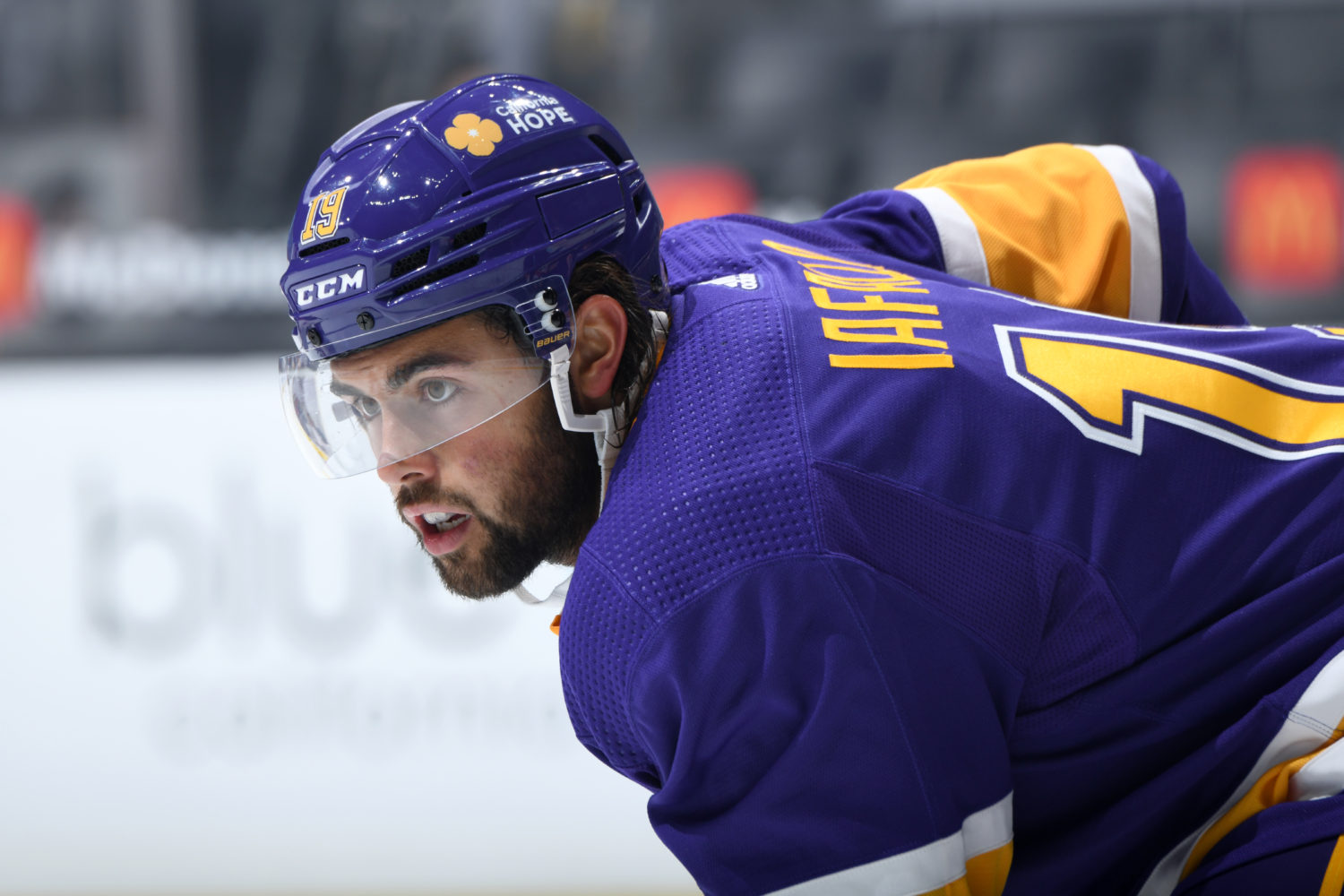 TONIGHT’S MATCHUP: The Kings and Blues meet tonight, in what was originally scheduled to be the second of two games between the two teams this week. Monday’s game was cancelled, due to weather in Colorado, which prevented the Kings from returning home in time.
More on that below.

HEAD-TO-HEAD: Forward Anze Kopitar leads all Kings skaters with eight points (3-5-8) versus the Blues this season, while forward Dustin Brown leads all skaters with five goals from six games played. Kopitar’s eight points are tied for the most by any player this season, on any team, versus the Blues. Kings goaltenders have combined to post a 4-1-1 record against St. Louis, with .925 save percentage and a 2.17 goals against average. St. Louis has been led by the duo of David Perron (4-4-8) and Ryan O’Reilly (2-6-8), who have each collected eight points from six games against the Kings.

KINGS VITALS: The Kings returned to the ice today for morning skate, an optional skate, with all healthy skaters present minus Drew Doughty.

Of those who entered this morning in question, forward Dustin Brown and goaltender Jonathan Quick were both on the ice, as they work their way back from upper-body injuries, with both currently considered day-to-day. Defenseman Olli Maatta also skated after being removed from the NHL’s COVID-19 list on Monday, and forward Jaret Anderson-Dolan was present as well, for the first time in a full-contact jersey since he was injured in Arizona in February.

Todd McLellan said this morning that Jonathan Quick will be the backup goaltender tonight, which means the expectation would be that Cal Petersen will make his third consecutive start between the pipes.

On the season, Petersen is 1-1-1 against St. Louis, with a .920 save percentage and a 2.34 goals against average. Petersen is coming off of a weekend in Colorado where he made 81 saves on 85 shots against in just two games played, including a career-high 44 saves in Friday’s defeat. On the season, Petersen ranks inside the NHL’s top ten in save percentage, goals saved above average and goals allowed adjusted.

So that takes care of one position. If we’re looking at the blueline, all indications would have Olli Maatta checking back in, after he was activated from COVID-19 Protocol on Monday. Maatta was out of the lineup, while on that list, in both games in Colorado, replaced by Kurtis MacDermid.

Up front is where we will have the most questions. Dustin Brown and Jaret Anderson-Dolan both skated today, with Brown amongst the usual “Top 6” forwards, which had seven players today, while Anderson-Dolan wore a full-contact jersey for the first time, amongst those in white. McLellan said this morning that Anderson-Dolan is close, and will return either tonight or on Friday against Vegas, while we did not receive an update on Brown.

UPDATE – Anderson-Dolan was activated from injured reserve this afternoon, clearing the way for his return to the lineup tonight.

Here’s how St. Louis lined up in their most recent game on Saturday –

Expect to see forward Tyler Bozak somewhere in those lines, however, likely in place of forward Mackenzie MacEachern, who was placed on injured reserve with an upper-body injury. Not necessarily a direct swap, in terms of line combinations, but at least in terms of personnel.

Bozak has missed his team’s last 21 games due to an upper-body injury, but Head Coach Craig Berube said yesterday we’re likely to see him return tonight in Los Angeles. Forward Jaden Schwartz, who has also been injured, is traveling with the team but is unlikely to return tonight, while forward Jacob de la Rose is healthy enough to play, but will not check in tonight.

“It can be frustrating at times, but I’ve dealt with it before,” Bozak said of missing significant time due to the injury. “Take it day by day, stay as positive as you can. There’s always light at the end of the tunnel.”

Following Vladimir Tarasenko, who returned in the last Blues trip to Los Angeles, Bozak marks another of several injured St. Louis players to return to the lineup, with more to come, as the Blues return to full strength.

Monday’s situation was unlike what many in this organization have faced in their professional careers.

The Kings were supposed to fly out of Colorado after the game on Sunday, but that flight home was delayed until Monday afternoon due to winter weather in Denver. To be specific, the largest amount of snowfall over a two-day window that the city had on record.

As a result, what was scheduled to be the second half of a back-to-back set, ending on Monday at home against St. Louis, was postponed by the NHL.

The Kings were in the midst of an intense stretch of games, on a crowded schedule, that was originally slated for 13 games in 20 days. Had Monday’s game been played, it would have been an immensely compact six games in nine days, and there’s two ways of looking at that. From his perspective, McLellan wasn’t looking for a “blessing in disguise”, he was focused on playing Monday’s game, and said that it’s too much of a hypothetical to discuss whether or not the extra day off was helpful or not.

“I think players want to play hockey, we want to be involved in the game,” McLellan said this morning. “Our mindset was to play that game and get prepared for it immediately after the Colorado match. As a result of the weather, and not being able to get here, it was cancelled. Is that a blessing in disguise? I don’t know, I can’t answer that, it’d be hypothetical. Sometimes, guys play really well when they’re not feeling good, we could have had a really good game that night back to back.”

Forward Alex Iafallo looked at it slightly differently, but was also more in the boat of it not being an outright positive for the Kings, in clearing up their schedule. He felt that the team was pretty upset off of the two defeats, and could have used that motivation heading into the back-to-back on Monday evening.

“I guess it could have went either way,” Alex Iafallo said. “Sometimes it’s good to have a break, but at the same time, we were pissed off from the game before. Sometimes, those back-to-backs, they’ll help you out, when you’re pissed off and ready to play the next day and hopefully win that next game.”

Regardless of the viewpoint, the Kings had consecutive days off between games for the first time this month, and the only time in what was originally scheduled as a stretch of 13 games in 20 days. Tonight, we’ll see just how beneficial, if at all, the change in plans actually was.

The LA Kings Reverse Retro jerseys return to the ice tonight for the second time this season at STAPLES Center, and the third time in total. The Kings previously wore the reverse retros on February 2 vs. Anaheim and February 27 @ Minnesota. The final of four scheduled appearances for the forum blue and gold sweaters will be in approximately one month, when the Kings host Vegas on April 14.