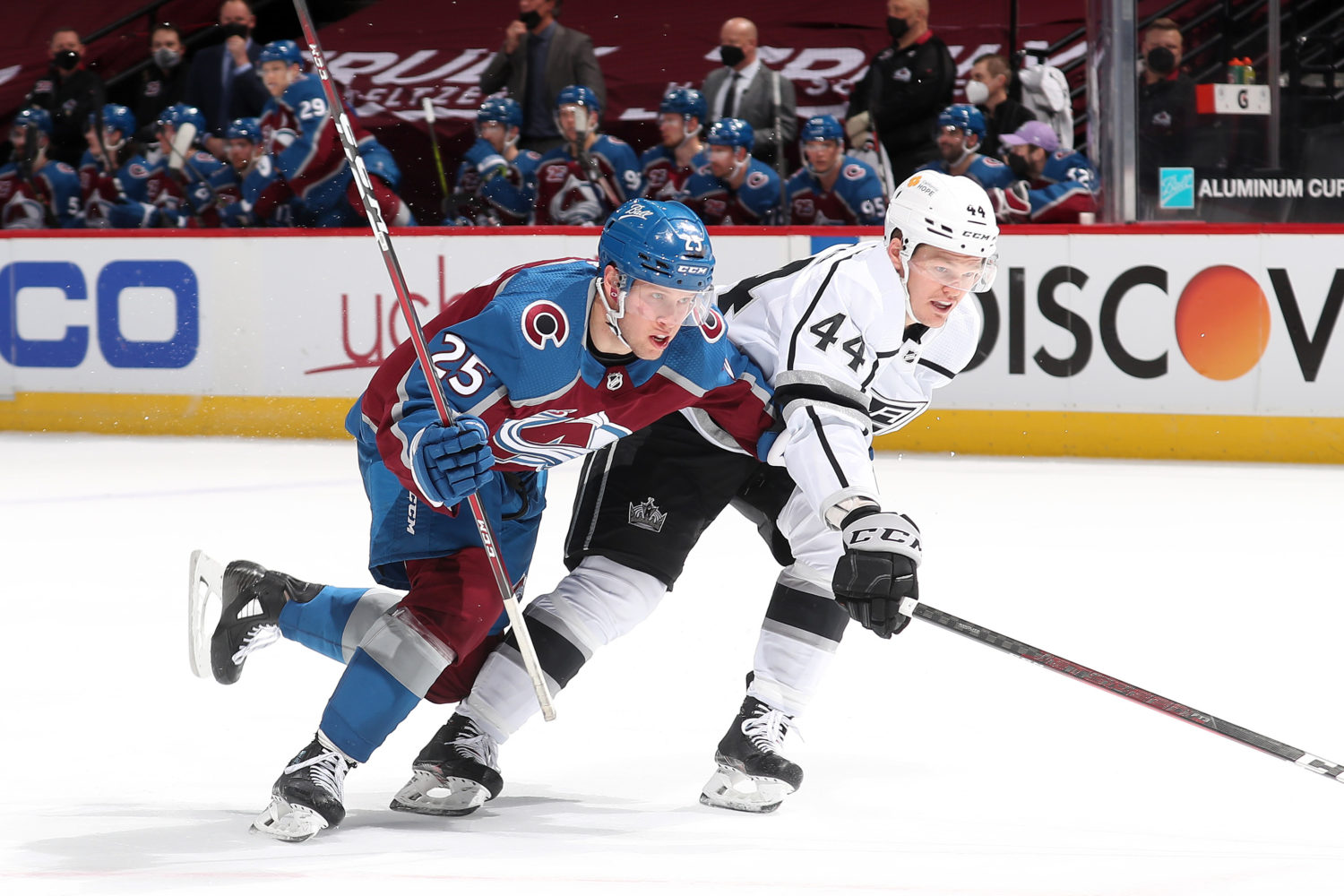 The LA Kings fell for the second straight game in Colorado, this by a 4-1 final, to complete a two-game set versus the Avalanche without a win.

After a game on Friday in which the Kings felt they were outplayed throughout the evening, we saw a better performance from the group tonight, as they created much better offensive opportunities against a high-flying Avalanche team. Outside of Nazem Kadri’s superb individual effort in the first period, as he got the better of Tobias Bjornfot, the Kings found themselves in a one-goal game into the latter stages of the second period.

It was then that the Kings strung together multiple shifts in the offensive zone, flowing momentum from line-to-line, but all too quickly, it went the other way. Kadri set up Andre Burakovsky for a re-directed goal, followed by Joonas Donskoi crashing the net just three minutes later. All of a sudden, it was a 3-0 game.

Defenseman Kurtis MacDermid gave the team some life with a nice goal early in the third period, though the Kings could not get any closer. Similar to Friday, their best looks came from individual efforts, with breakaways and partial breaks to spare, but Philipp Grubauer was solid between the pipes, limiting the Kings to just MacDermid’s goal across the 120 minutes.

Goaltender Cal Petersen was excellent for the second consecutive game, as he made 37 saves on 40 shots, less than two days after he made a career-high 44 saves on Friday evening. Petersen’s play likely kept these two games closer by final score than they could have been and his efforts gave the Kings at least a puncher’s chance both times out.

The Kings were without forward Dustin Brown tonight, who is currently considered day-to-day with an upper-body injury. Forward Alex Iafallo, who missed Friday’s game with an illness, rejoined the lineup this evening, in a 1-for-1 swap on the top line.

On Cal Petersen’s play across the two games
Outstanding. Very calm, gave us a chance to steal one the other day. Today, we played a better game, but we’re not at their level yet, but he was what we thought he could be, and what he has been all year. He was outstanding.

On the breakaways the team had, and if one of those could have turned the game
I don’t think yesterday as much as today, I thought we were better today, marginally better, but yeah, there were a few opportunities that we had that if we could have finished…maybe I’m wrong in saying that, Wagner got in last night. It was a one-goal game and he had a chance. Grubauer played really well, he wasn’t overly tested, but some of the pucks he did face were very dangerous ones. He had some good nights.

On if there are the kinds of games a growing team just needs to go through to get better, or if he’s focused on certain areas of improvement
I think there’s still some things that we have to improve on. If we break the goals down, and let’s face it, they had numerous other chances too, but we got beat quite cleanly on a 1-on-1, a veteran player against a very young one that’s learning his way through. The second goal, it kind of happens, that’s hockey, those are built into a game. The third one, we had a really, really poor line change, lost a stick in the neutral zone, just a combination of mistakes. I thought we created more, we had more in the offensive zone today than we did [on Friday], and that was a good thing, but some of these goals were preventable, yet, there could have been 3-4 others if Cal hadn’t stood on his head that we’re not even discussing.

On Dustin Brown’s injury
He’s been carrying it for a little bit…and this was a good sign for our team. Your leading scorer goes out and guys pick up the slack a little bit. Obviously, we didn’t score enough goals or play well enough, but nobody rolled over for tonight’s game, there weren’t a lot of excuses. If moral victories mean anything, we picked Dustin up tonight. Not having Olli affects us, we had a few players play, not necessarily sick, but not at their upper level. I’m pleased that the guys valued the 60 minutes and played hard, it’s a good sign for our long-term growth. We need some guys to get some rest, get healthy and recharge the batteries for as early as tomorrow.

McLellan also confirmed after the game that the Kings will spend the night in Denver tonight, due to weather in the area.

– Goaltender Cal Petersen made 37 saves on 40 shots against tonight, giving him 81 saves on 85 shots in total across the two games in Colorado.
– Defenseman Kurtis MacDermid collected his second goal of the season tonight in the third period. MacDermid trails only Drew Doughty in goals amongst Kings defensemen this season.
– Forward Anze Kopitar collected his team-leading 25th assist of the season, and his team-leading fifth point against Colorado (0-5-5).
– The Kings did not allow a power-play goal for the fourth consecutive game, as they improved to 83.3% on the season on the PK, good for seventh-best in the NHL.

The Kings are scheduled to play the St. Louis Blues tomorrow evening at 7 PM at STAPLES Center. The team will not hold a morning skate in advance of that game.